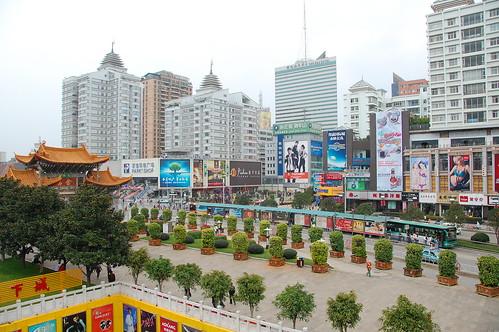 I walked out of the bus station in Zhengzhou into a whirlwind of Asian madness.

I was eveloped by a chaos of colorful signs, people, traffic, bicycles, and pollution. Everyone seemed to be in a hurry to get somewhere, and 10,000 horns blasting simultaneously filled the air. I am vagabonding in Asia again, and I love it!

Zhengzhou is the closest big city (I think around six million people) to the Songshan Mountains and kung fu land. Zhengzhou is not entirely an unattractive city, but it is still concrete and gray, as expected in an industrial city. I humped around all day with my rucksack on, covering miles and miles, and never saw another single foreigner. And for good reason: there is really nothing to see here! Unless you are an escapee from one of the kung fu schools in search of shopping or good food, there is no reason for tourists to come here.

That also explains why I was such a spectacle. People were nearly crashing their bicycles to stare at me, some openly pointing and stopping in mid-step. It stressed me out at first and I just wanted to turn and shout “YES, I AM WHITE, AND YES, I AM TALLER THAN YOU!”. I don’t think it helped that I was carrying my bags as well, as backpacking is not really that popular for the Chinese. After a while, I grew accustomed to the celebrity-like attention and just started returning smiles and exchanging “hellooooos” for ni hao. If I had a dollar for every teenage girl that giggled and smiled at me today, I could buy this city.

I had several missions that I wanted to accomplish while in this city, but none more important than one.

Worse than a dinosaur, I want meat.

My muscles are screaming for protein. After one month of nothing but chunks of fat at the kung fu school cafeteria, I would probably bite into a live cow. Other than the random pieces of bone and chunks of hooves that they throw into the green beans, I have been meat-free for a long time.

I rounded the corner and nearly burst out into maniacal laughter. I was standing in the warm glow of the golden arches.

McDonalds. All that is wrong and evil about America. At home, I would run from this damn logo, but here, I almost ran up and hugged the sign. I did not care if McDonalds is an evil empire. Hell, I wouldn’t have cared if Satan himself were in the back flipping up burgers with a grin. I nearly broke my legs getting inside.

This place was popular! I joined the queue, and the manager ran up and gave me VIP treatment to the front. He was proud to have a Westerner in his Western establishment. They handed me an English menu even, but I surprised them and ordered in Chinese. I got a Big Mac meal, supersized (which made it the equivalent to a medium size in America) and an additional six chicken McNuggets — all for under $4!

Crap food under ordinary circumstances, but I was desperate.

I retreated to a quiet corner to drop my pack and enjoy my feast. I could almost see a lump of solid fat traveling down my unsuspecting arteries, but wow it was good. After getting my fix, I vowed to stick to the local street food, at least for the next month or two.

I spent the next five hours wandering around Er Chi Ta, the main center in Zhengzhou, where you can find every type of shop you are looking for. My train for Beijing leaves in two hours, and after getting up at 5:30 a.m. this morning and running several miles, getting no sleep from the going-away party, and eating enough McDonalds to kill a small bear, I am nearly comatose.

Previous Post: Freeeeeeedom!
Next Up: Back to Work (If You Call It That)