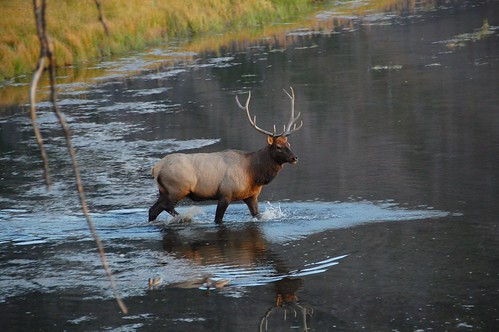 The photo above sums it up! Wow.

The more we drive through Yellowstone National Park, the more incredible encounters we have. This place is one giant zoo without fencing.

Our first day in the park, we were calling out wildlife spottings with all the ferocity of a fighter pilot calling out bogies:

I was swinging my camera around like a door gunner and changing CF memory cards like empty magazines.

We were pulling over to photograph wildlife at every opportunity and wondering why cars would speed past with passengers rolling their eyes at us newbies. Now I know why: those were the veterans of the park and they knew good and well that if you missed a picture of one bison here, there would be 20 more just around the corner. Most probably causing a horrific traffic jam as they blocked the road!

Now on day 2 in the park, we have seen so many elk, antelope, and bison lately that I have become numb to the entire experience. Much like one becomes cathedral-blind while in Europe after visiting the 97th church of the trip. This wildlife should blow me away, but having grown up in the TV generation I expect some new stimulus every 60 seconds or I threaten to go into a violent frenzy. 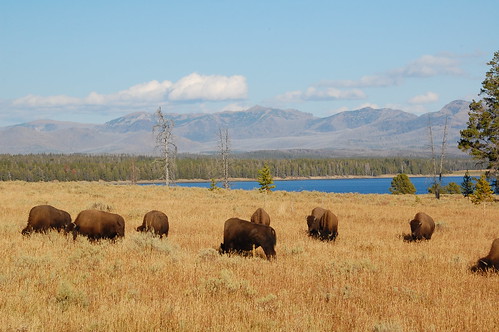 So far we have spotted — and gotten very close to on multiple occasions — bison, antelope, coyotes/wolves, bald eagles, mule deer, whitetail deer, and scores of elk. Like Newt’s famous quote in the movie Aliens: “They mostly come at night…mostly.” You have to be careful driving as the sun gets low. There’s nothing like rounding a corner in the dark and seeing two dozen shining eyeballs staring at you in horror.

The only major animals that haven’t held still for my camera yet are the two biggies: a moose and a bear. Both of which I had to go all the way to Alaska to see last year. I know that my prospects are low, but I am remaining optimistic.

The bison are a nuisance and have cost us hours in traffic jams. They wander out into the road and stand there looking like the dumbest animals ever dropped on this planet. They look around as if they are pondering where all the grass went and stare blankly as people lay down on their horns and load weapons in road rage. One man was even brave enough to bump one slightly with his vehicle and the animal never even budged.

I decided to have my revenge by committing to eat one of the damned things at night for dinner. You can get delicious bison burgers everywhere. Take that! 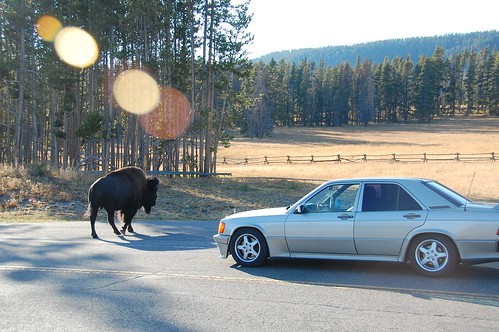 There are signs everywhere warning you to stay away from the bison because now is their rut — or mating season — and they have some pent up testosterone issues. Getting mangled by a horny 1000-pound buffalo isn’t exactly my idea of a fond vacation memory, so I decided to comply. The elk are also in their rut and we witnessed one bull cross a busy road, swim across a stream, and chase a female down in the field. Despite his show of effort, she decided to play hard to get and ran when he got too close. He snorted and let out a frustrated cry that carried through the fields. I know how he feels.

The rampaging animals didn’t stop us from hiking four miles to a gorgeous lake. As always, the sky was an artist’s blue and we haven’t seen rain or even a cloud since we started this road trip. As I walked alone through the fields of tall brown grass, I could see impressions where large animals had taken a rest fairly recently. As always I was hoping to spot a grizzly but wasn’t even offered a tiny bit of hope in the form of scat (the biologist term for bear poo).

This was my first proper hike in the West, and I vowed that it would not be my last. In fact, I plan to join the multitude of people here with rucksacks strapped to their motorcycles. Unfortunately, their packs don’t even look big enough to carry more than a pair of socks, let alone a laptop and SLR camera. Are motorcycle vagabonds even allowed to carry complex electronics? Hmm…I’ll have to figure that one out when the time comes. 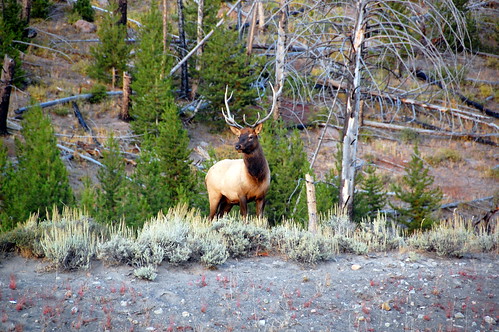 As numerous as the bison are, you cannot help to stop and watch, and think of how they roamed free all over America before Buffalo Bill and the Native Americans figured out just how delicious bison meat is — and way healthier than beef as well. At one time, the animal was nearly wiped out by unrestricted hunting and only recently came off the endangered species list with a resounding boom in population.

Maybe that’s why they stand in the road for hours — revenge?

.
Previous Post: Welcome to Yellowstone!
Next Up: Old Faithful