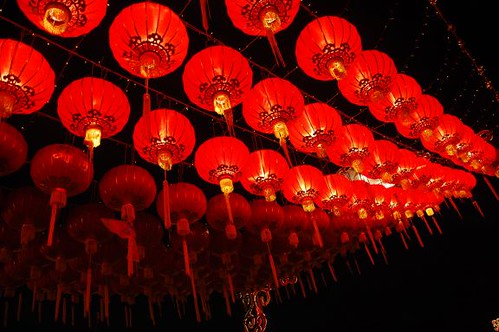 People periodically ask me why I love Thailand so much.

Other than my usual Je ne sais quoi response, I always tell people that Thailand is tantalizingly unpredictable.

Rather than be a good blogger and tell you retroactively about how fascinating the week-long Yee Peng festival was for me in Chiang Mai this year, I’ll let you read my buddy Ted Beatie’s excellent writeup of the Yi Peng/Loi Krathong in Chiang Mai.

Just know that the sky — and sometimes the ground — was literally on fire for about a week. I haven’t come near this many flying dangerous projectiles since basic training for the U.S. Army. Give an enthusiastic  crowd of hundreds of thousands a few million illegal fireworks and…well…you get the picture.

Public safety in Thailand sometimes takes a back seat to tradition or good old-fashioned fun. Fine with me, unpredictable is beautiful!

Here’s an example from the Yi Peng/Loi Krathong 2010 festival in Chiang Mai:

The kickoff night for Yi Peng and Loi Krathong began in true Asian style with lots of fanfare.

There were public speakers, VIPs, and an enormous gathered crowd of both locals and tourists — all of us anxiously awaiting the start to Loi Krathong, Thailand’s annual lantern festival.

To get festivities started, the mayor’s wife stood in front of a barrage of photographers, television crews, and onlookers. She lit the burner on a giant elephant lantern — the most intricate and celebrated lantern of the entire festival.

A cheer went up as the bloated animal balloon finally filled with enough hot air to rise off the ground — officially beginning the festival. 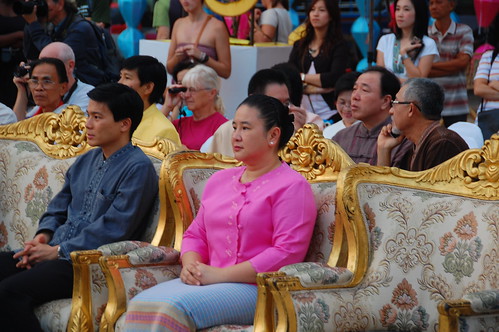 As the elephant gained a little altitude, people prematurely dropped their cameras and began scrambling to get a better position for the upcoming parade through the city.

I was about to do the same when I heard an audible gasp from several Westerners. I looked up just in time to see the string of firecrackers attached to the bottom of the elephant ignite the whole damn thing. Not the best of ideas in the first place, the locals regularly attach fireworks to the lanterns for added effect. A majority of the firecrackers end up falling on the crowd below; they seemed perfectly timed to go off near your head. 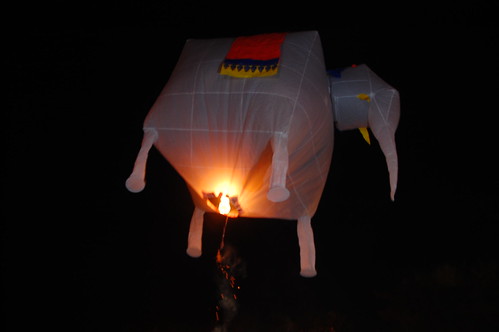 I watched in half hysterics and half terror as the giant elephant exploded into flames. Bits of fiery plastic were dropping down onto the crowd, which in any other place, may have panicked.

My survival switch flipped. If this thing fell into the crowd, the good old-fashioned fun was going to turn into a bad old-fashioned trampling. Tourists scrambled to get out of the public square, but surprisingly the Thai people barely even looked up!

Even the VIPs seemed to think this was business as usual. Does this happen every year? I met eyes with a few dozen other tourists, who with a look of terror asked me: should we run like hell?

We stood our ground as things turned really ugly — and even funnier. For some reason, after all the fanfare and theatrics of getting this damn elephant into the air, I couldn’t help but laugh hysterically at its 10-second lifespan!

As predicted, the cursed elephant plummeted from the sky in flaming, apocalyptic doom. Luckily, a slight breeze had carried it just beyond the crowd. The thing was roughly the size of a Volkswagon Beetle; despite the drama, only us tourists looked onward at the train wreck in progress.

While we were spared a slow, horrible death by melting plastic, the government building across the street wasn’t so lucky. Under the close watch of a full moon, the elephant from hell landed squarely on the roof in a final explosion of flaming plastic. 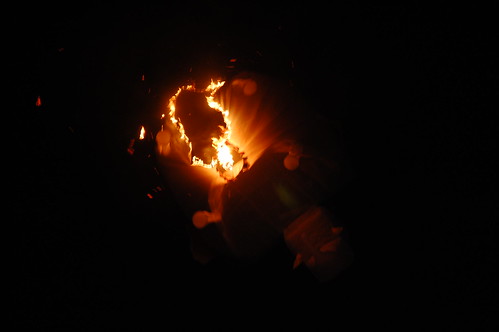 Another gasp went up from us farangs.  The Thai people still never even looked up. Even the mayor — who probably should care that his office is on fire — nonchalantly walked around shaking hands with various VIPs.

We watched as the elephant burned long and hard on the rooftop. No bells, no sirens, no men running in that general direction. Does Thailand have a fire department during Loi Krathong? If so, I’ve never seen them. Maybe due to lack of interest, the elephant finally gave up and burned itself out…I’ve honestly never seen anything like it at a public gathering.

Never in a million years would stuff like this fly at home, somebody would just have to sue somebody. Not so in Thailand! In the last four years I’ve seen so many small, bizarre-and-wacky things in Thailand — this will probably just get filed into the WTF-just-happened archives and forgotten.

After the flaming elephant appealed to my inner-pyromaniac, I just had to get my own lanterns and join the fun. Now…how the hell do these things work? 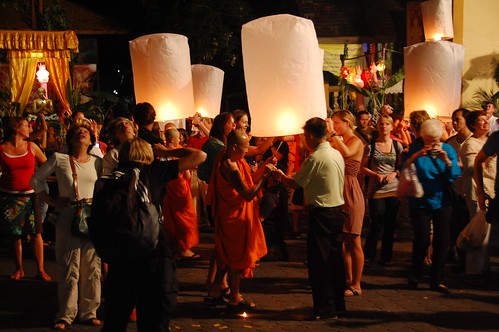 .
Previous Post: My Chiang Mai Living Expenses in 2010
Next Up: Five Years on the Road!