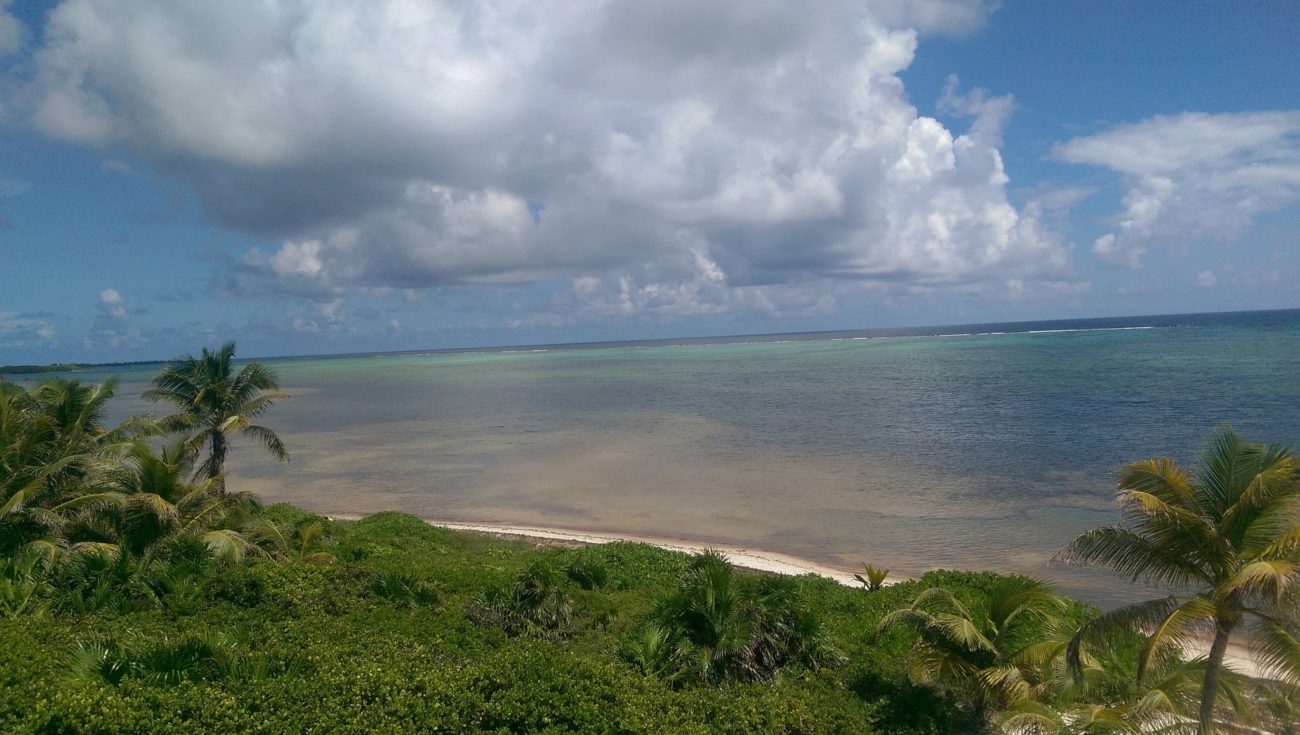 All work and no sleep, sunshine, freedom, or vegetables makes Greg a raging lunatic.

I had several friends jokingly suggest that my two months of writing and voluntary isolation while house sitting at #theYucatanExperiment could go horribly wrong. Not vacation-misadventures type of wrong, but The Shining type of wrong. The experiment did derail somewhat, but as always, I’ve lived to tell the tale in a greasy blog post.

And while the house machete was used only to sever palm fronds and open coconuts, there were some times when I was tempted to hoist the black flag and run amok.

Like Orwell said in Down and Out in Paris and London, “Fate seemed to be playing a series of extraordinarily unamusing jokes.” Rather than enjoy myself (after all, the second-largest barrier reef in the world was within eyesight) I began counting down the days to end this awful deployment. Eight weeks later, I bounced an old Dodge truck down that jungle road with my backpack beside of me and never even considered looking back.

But it wasn’t all bad. I did make some long-overdue progress on a book, assuming I can find an editor brave or stupid enough to risk eye injury from reading it. And many lessons were learned. Granted, some were the types of lessons you learn when stubbing your toe in a dark room, the kind you could have probably lived without. But all life experience is salty and delicious. I’ll take it.

So rather than the usual, I’ve decided to focus on those important lessons here:

Lesson #1 : Always Get It in Writing

All freelancers know this. But for some reason, I didn’t apply this infinitely important wisdom to house sitting. A fatal mistake. Actually, what I was doing, by any amount of etymological finagling, could never be deemed “house sitting.”

I was running a full-on, three-unit vacation home, off season, in the middle of jungle nowhere, with destructive storms pounding the place. I ended up providing hundreds of hours of free labor in a place where scores of people are begging — actually stopping my truck to ask — to work for between $15 – $20 per day. Go figure. Meanwhile, paying guests caught in the middle were depending on me to salvage their fragile vacations by investigating exciting issues such as raw-sewage smells and inexplicable mosquito infestations.

Bad solar cells and a bad battery (unknown at the time) plus little sunshine made keeping the system charged practically impossible. I literally lived by the light of my solar lantern for weeks. Rather than a Wilson as Tom Hanks kept close in Castaway, I had a LUCI — even better. I’ve always been a fan of tarsiers, and I’m convinced my eyes have finally enlarged enough that I’ll be accepted into their nocturnal fold the next time I apply. 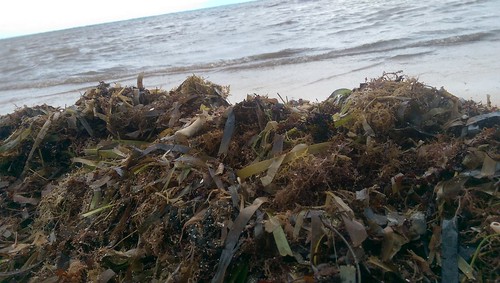 The entire Caribbean coast is under a massive onslaught by the stinking stuff — good news if you’re looking to make $15 per day shoveling it, bad news if you’re a travel writer with other aspirations for the day. 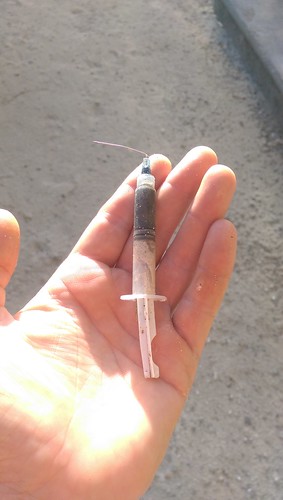 At least every other day, I singlehandedly moved between 1,000 and 2,000 pounds of sargassum and rubbish off the beach after storms. A wet, sandy wheelbarrow load of sea grass weighs at least 100 pounds, probably more. On some days I moved 20 wheelbarrow loads — literally a ton — usually before 8 a.m. I actually dreamed about shoveling sargassum and can still smell it from time to time.

The problem with sargassum is unprecedented this year. If you’re thinking of vacationing anywhere on the Caribbean coast, check out what’s going on with this stuff before you commit. World governments are subsidizing cleanup in popular places to save tourism. But if you go somewhere remote, all bets are off.

You know that you’ve made it when you find yourself on your hands and knees picking up medical waste on a beach in Mexico — for free. I kept thinking about all those people who warned me 10 years ago that quitting a “good” job at IBM would lead to something like this. 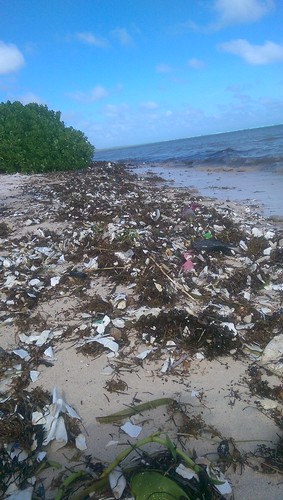 I’ve survived unsurvivable situations; served as an Army forward observer (quite a dangerous job); became a self-taught engineer without going into debt for school; designed enterprise networks for IBM; taught myself to trade stocks; became a homeowner; became a home seller; traveled the world extensively; became a published travel writer and photographer — I’m proud of what I’ve crammed into 40 years on this planet.

But cleaning up the filth of mankind on a Mexican beach — for free — launched me into a Poor Me pity party that bordered on epic depression.

So what do you do with hundreds of pounds of plastic flotsam when you’re in the middle of nowhere? You burn it, of course. Never mind that the nauseous, blue-gray smoke can give cancer just by looking at it, or that we were in a national park filled with enough species of migratory birds to possibly rival Sri Lanka.

When I would light the big pyres, birds in the trees above would go absolutely berserk. I tried to convince them apologetically that I wasn’t the enemy, that I was usually on their side, but that’s hard to do when you’re still holding the can of gas.

The good news is that by not packing out the rubbish, a millionaire was saved around $4 that would have been charged by the local dump.

Lesson #4 : Paradise Is a Personal Thing 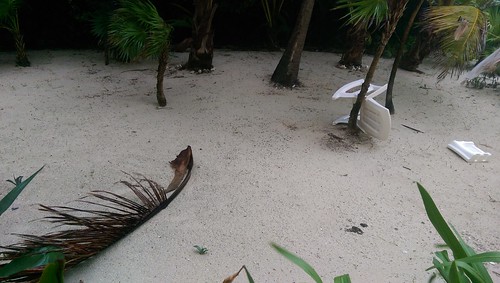 It’s completely subjective. Two of my guests loved Xcalak so much they decided to marry on the beach there. Years ago, the synapses for “paradise” crossed the brain to connect with the cranial region where Xcalak was stored. Once that link is formed, you’re willing to overlook all the imperfections and shortcomings of your personal paradise. I’m very guilty of doing this.

In 2006, the islands in Thailand became my personal paradise. Of course there are a myriad of things to hate about the place — the resurgence of man buns, for instance — but I still remember my sweetheart from a different era: when she was sane, beautiful, and had all her teeth. While one person sees Xcalak as an exotic, Mayan nirvana, I see a garbage-strewn hellhole and village teeming with bad food and hateful people.


I’ve already been in plenty of situations where I began talking to myself. Many people experience this, and chatting yourself up isn’t actually all that worrisome. But in this instance, I was having quite a good conversation with myself when a third Greg popped up and interrupted.

“Hey, who invited this asshole?” I asked Greg #2. He didn’t know, so we booted the newcomer before things really turned ugly. The human psyche is an impressive thing, but stretching it beyond its elasticity could lead to the proverbial snap. Better not to proceed so far down the rabbit hole that you interrupt something important.

By the time my first vacationers — a family of five — arrived three weeks later, I had already weathered 18 days and nights of howling wind, rain, isolation, darkness, and sleep deprivation thanks to an overly alert guard dog. Even giant bats were battering the windows at night. My theory is that they were desperate after so many consecutive days of strong winds, so tasty insects had to be grabbed wherever possible. Every day the going got a little more weird. 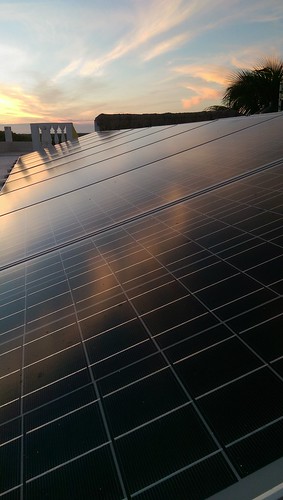 I’ve often been told, and was even half convinced, that adding routine to my daily life could somehow improve it and cause me to become more productive.

I now question that logic after #theYucatanExperiment. Rising every day at 6 a.m. or earlier and proceeding through insipid maintenance rituals that began and ended with feeding the dog, really didn’t do much for morale. My dopamine receptors asked every day, “Is that it, boss? You’re joking, right?” Eight weeks of monotony were occasionally broken up by four snorkeling trips I made and by two scorpion stings received. Other than one potentially explosive day when a small, blue flame danced up the side of the freshly filled fuel tank on the generator, I had to make my own entertainment.

I fed the hermit crabs, tried to guess which window would break next (four in total were broken by wind), opened coconuts to drink, and made nighttime patrols; thefts in the area are common. Strange noises in the bush at 2 a.m., the dog barking in full alert — I’d arm myself and go investigate. It’s a great way to squeeze some adrenaline from dried up glands but terrible for sleep.

I also learned that monotony of diet is bad for morale — a point well covered in Tom Neale’s An Island to Oneself. In the last weeks, I literally ate beans. Just beans. True, I could have driven the two hours each way and spent $50 in gas to go buy something marginally better from the shops in town, but I opted to save the time and money.

On a side note, Mexicans seem to be crazier about putting MSG into food than Asians, even.

The first sting, top of my hand on the third day there, didn’t produce any venom. The second sting, on the bottom of my foot, packed a temporary punch. I stepped on the little scorpion while burning yard waste, and it did what it knew how to do — can’t blame it. Despite the inconvenient location, I didn’t have any adverse effects to the sting. Not even a face twitch. After 10 years of adventure travel and creature encounters, my first scorpion sting was slightly disappointing as a nonevent. 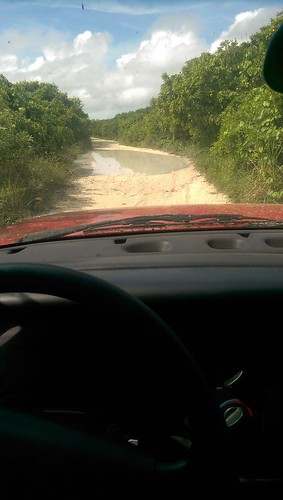 George Orwell said, “It is fatal to look hungry. It makes people want to kick you.” Well, not only did I look hungry, I made the mistake of shouting over and over again that I was hungry. Not for edibles — although, having something to eat other than beans would have been nice. No, I was starving for energy. I needed an ear. Sympathy. Pity. Something from those in the rear who were close to my heart, the same people who couldn’t understand how or why I could be so depressed in such a beautiful place.

Instead, I was considered as being ungrateful for the lifestyle I enjoy. Calls and contact dried up when I needed support the most, effectively executing a boot-on-the-back, muzzle-to-the-head, coup de gras of the messiest nature. A severance of two important personal relationships, people who can’t be replaced. Sloppy work on my part, but the tab has been paid.

Despite what the Travel Channel says, being near a tropical beach is not the solution to all of life’s problems. True, the scenery was indeed gorgeous. But it doesn’t really matter how elegantly your beautiful date dresses when she’s holding a strangled kitten in each hand. The end result is the same. 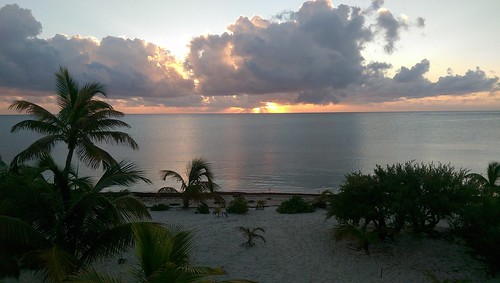 Although the nature of lessons learned tends to be from negative experiences, I honestly don’t regret spending fall in the farthest reaches of the Yucatan. All experience is good experience, and I did hone some survival skills that may come in handy one day when zombies begin hatching from the sargassum.

I came home a few days ago to mercifully warm weather. Getting off a plane from the tropics with Christmas music and decorations in the airport to welcome you home conjures confused-but-joyous emotions.

On my last flight of the year, from Chicago to Lexington, a businesswoman noticed that I was the only one in flip-flops, “You look like you’ve been a few places lately.”

Thinking back over the seven countries these flip-flops have walked this year, I grinned. 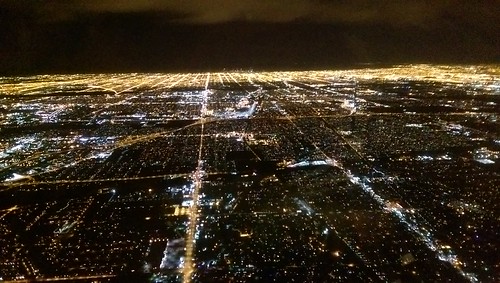 Chicago from the window of the Freedom Bird.

.
Previous Post: The Yucatan Experiment Begins
Next Up: 10 Years of Vagabonding: A New Adventure