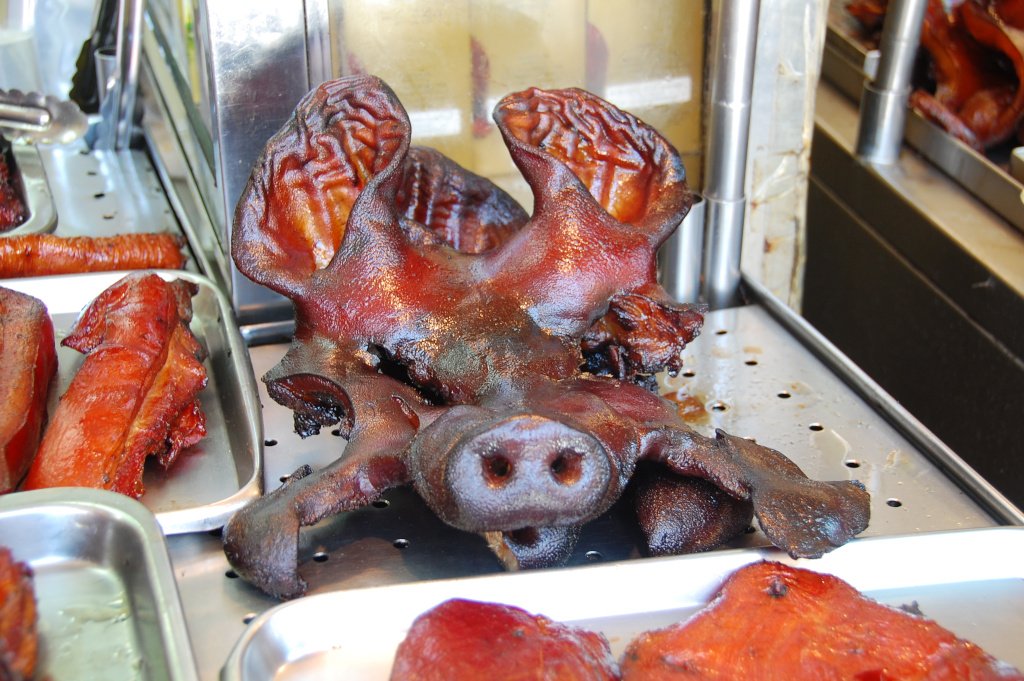 Food in many parts of the world, particularly where there isn’t much to eat, can be loosely defined as anything you put into your mouth that doesn’t kill you. Some of this weird travel food I’ve encountered over the years is proof.

My vegetarian friends may want to avert their eyes: If food walks, crawls, swims, slides, or oozes, it’s fair game. And I’ve probably eaten it or had it offered by well-meaning folks.

This file hardly covers all the weird travel food that has slid down my gullet. Some things I consumed (such as Tibetan butter tea when seeing the 14th Dalai Lama at his home) were too repulsive to capture.

Sometimes I was too busy eating to pull out my camera, or too sick after eating whatever it was to care about taking a photo (hence the need for a travelmate from time to time).

Warning: If you’ve got a squeamish stomach or don’t like to see fuzzy little animals turned into food, here’s a better list of good vagabonding food that I’ve enjoyed.

Enough blah blah disclaimer and on to the nasty pictures of weird travel food. That is why you’re here, right?

The Most Terrifying Travel Food

Let’s kick off this list of weird travel food seen in the field by addressing the elephant in the room, or in this instance, the pig face in the room.

Holy mother of all that is good and decent in this world. This thing belongs in Leatherface’s wardrobe from Texas Chainsaw Massacre, not on a family’s table. I found this pig face waiting to be consumed in a market in Chinatown, Bangkok. I hovered around hoping that someone would negotiate to buy it, or at least try it on, but no luck this time. (Bangkok, Thailand) 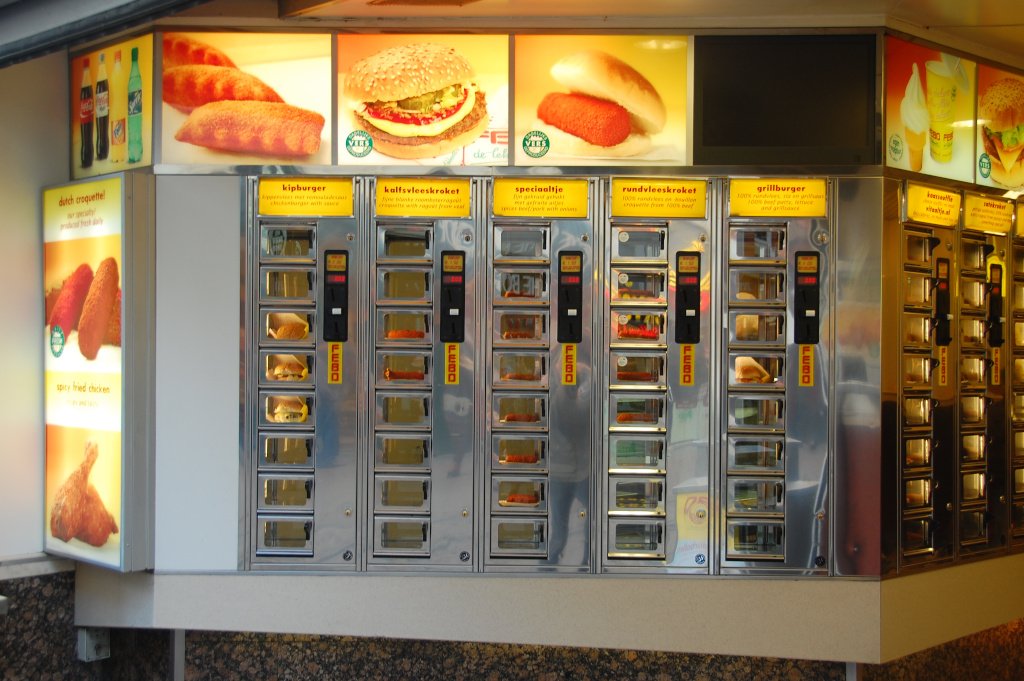 It doesn’t seem fair to my Dutch friends to follow up the face with their beloved vending food, but I find it equally inedible unless you’re on the brink of alcohol poisoning at 4:30 a.m. The famous Dutch automatiek known as FEBO has been serving up bitterballen, croquette, and other RDFOs (random Dutch fried objects) to stoned tourists and drunk people since 1941. Don’t get me wrong, I do like bitterballen, but I prefer them not to be handed over by a robot. (Amsterdam, Netherlands) 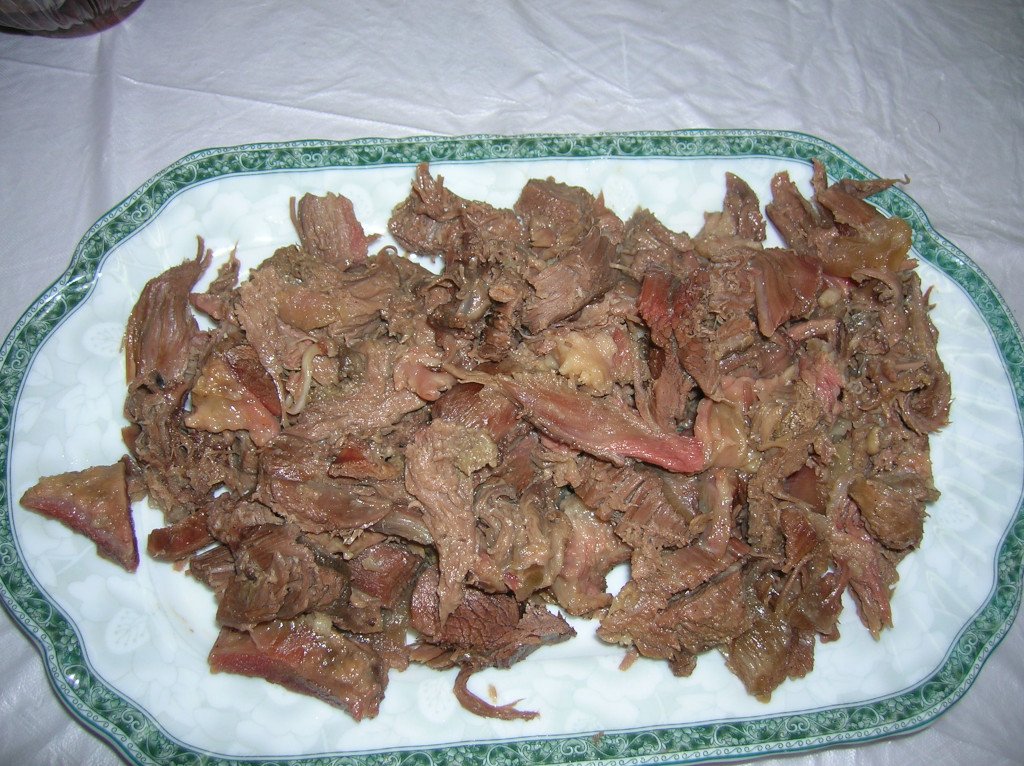 My first ever plate of man’s best friend (I’ve now had it three times) was and all that I feared: squishy, fatty, and disgusting. Now I have a better understanding of why man’s best friend still wanders freely in villages where people are starving. (Beijing, China)

Note: There is a sinister, illegal, dog-meat industry in Asia. I obviously don’t support that, however, I’ve found myself in places where dog was consumed out of necessity. In one Indonesian village, a dog was hit by a motorbike during my visit and subsequently prepared for me, the guest. 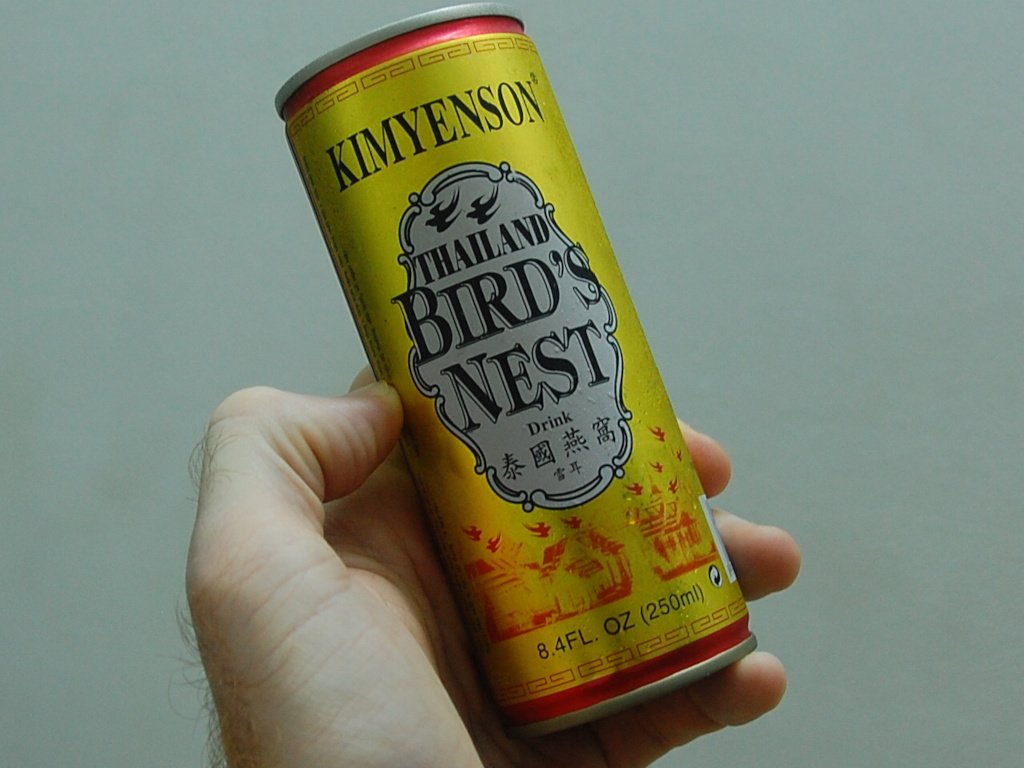 As if turning saliva from cave swiftlets into an expensive soup wasn’t bad enough, some ingenious Thai or Chinese entrepreneur decided that bird spit would make a fine, carbonated beverage. Wrong. The smell of the hiss as I opened the can made me wonder if it was full of decaying bird feathers. (Saigon, Vietnam)

Chicken Hearts on a Stick 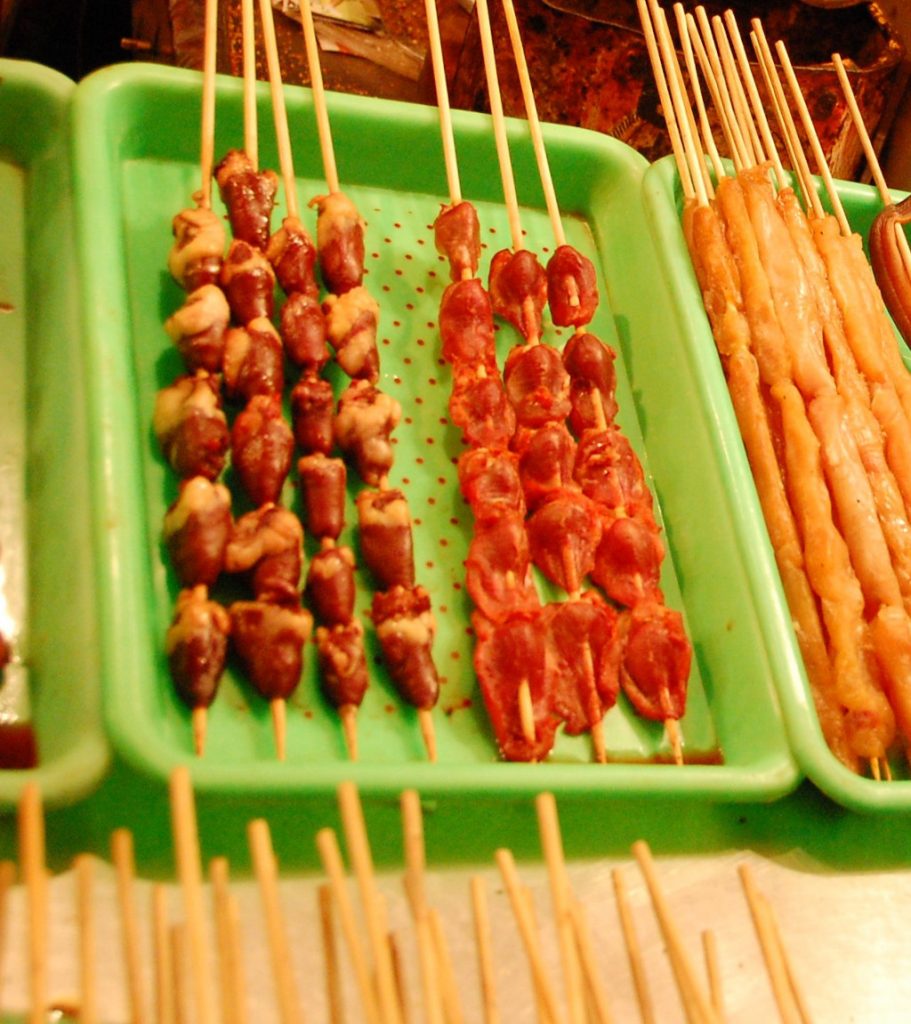 These chicken hearts I found in a Chinese market were actually edible and enjoyable. Each one burst with salty, metallic blood and I had to spit the hard little valves out. (Chengdu, China) 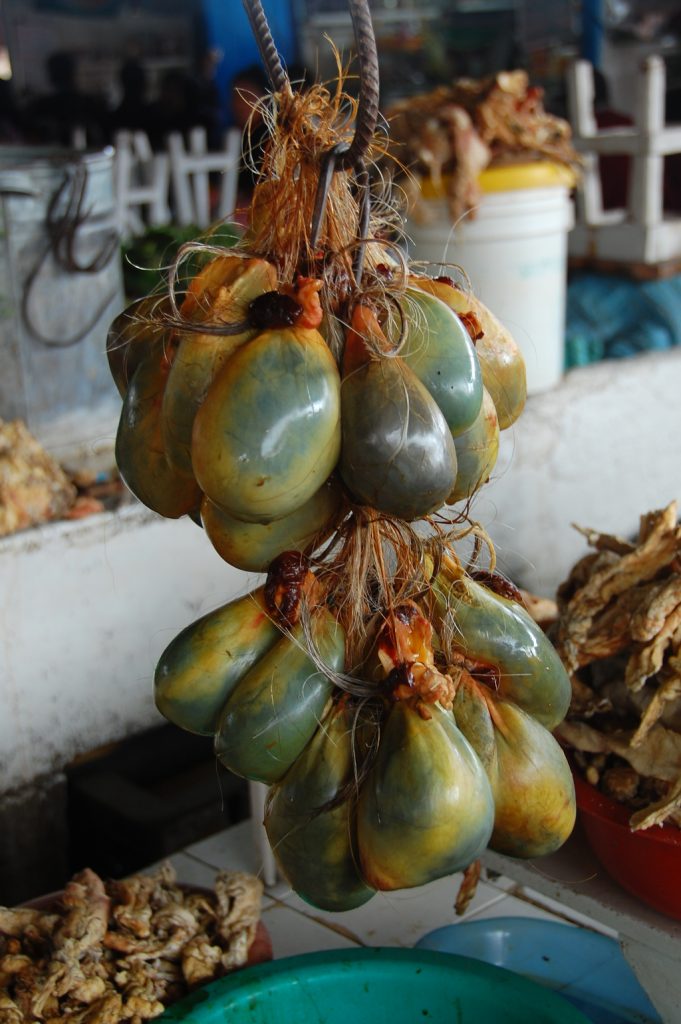 The bulls in Peru actually survive having their balls removed; it makes them more docile and they have the chance to pursue their dreams of opera as star soprano singers. Plus, they’ll never have to worry about being shipped off to trample tourists and Spaniards in Pamplona. Seeing the pubes still attached really didn’t make them any more appealing. (Cusco, Peru)

Scorpions on a Stick 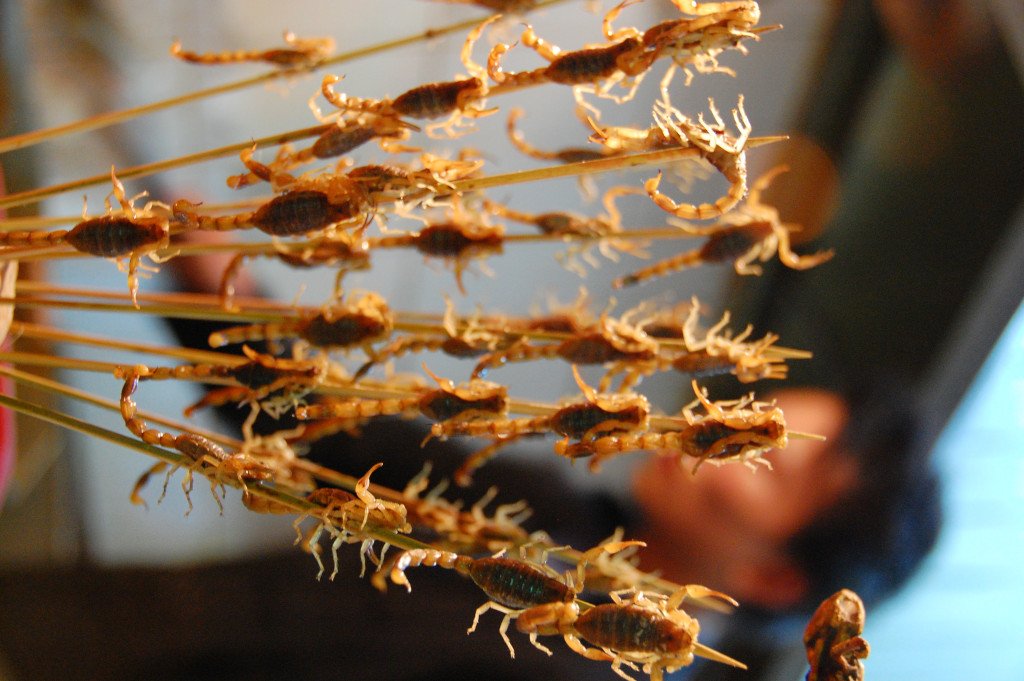 I was more than willing to try these scorpion kebabs in China but there was only one problem: THEY WERE STILL ALIVE. Messing with any creature that survives being impaled on a stick for extended periods of time is asking for trouble. In fact, they would sometimes sting passerby that leaned in to look at other food. Every survivalist knows that the most dangerous scorpions are the smaller, translucent ones. And having my face paralyzed by my food makes for lousy dinner conversation. (Beijing, China) 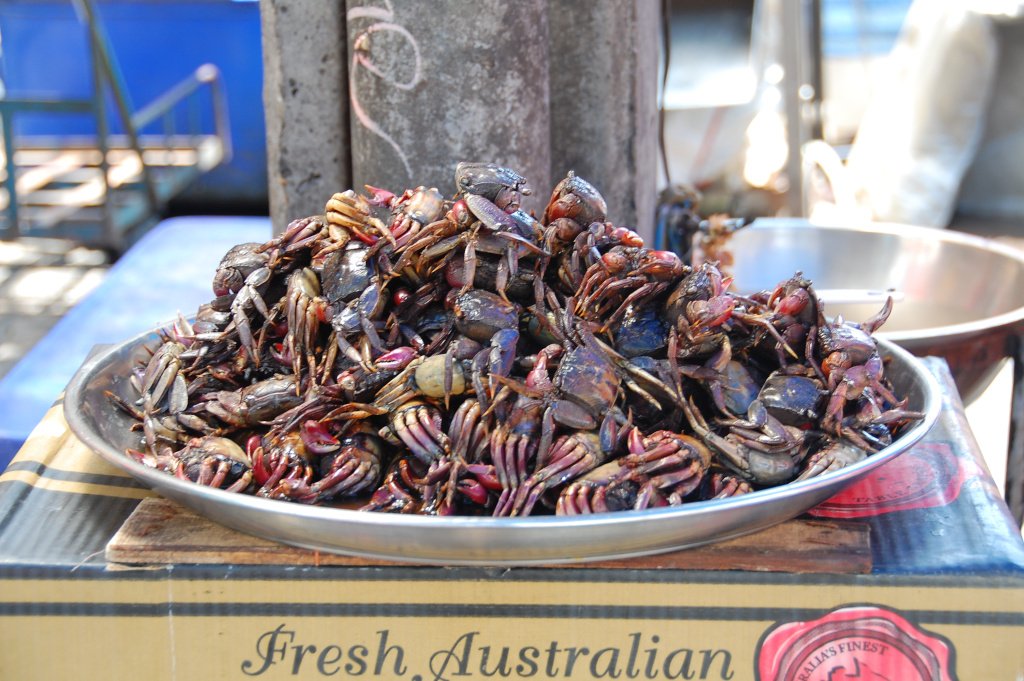 Normally, a big plate of fresh crabs would be a very good thing. Unfortunately, these weren’t fresh or Australian as the box they are sitting on implies. These grumpy little mud crabs came from the Chao Praya River in Bangkok and really thrive around the pipes that dump raw human sewage into the waterway. (Bangkok, Thailand) 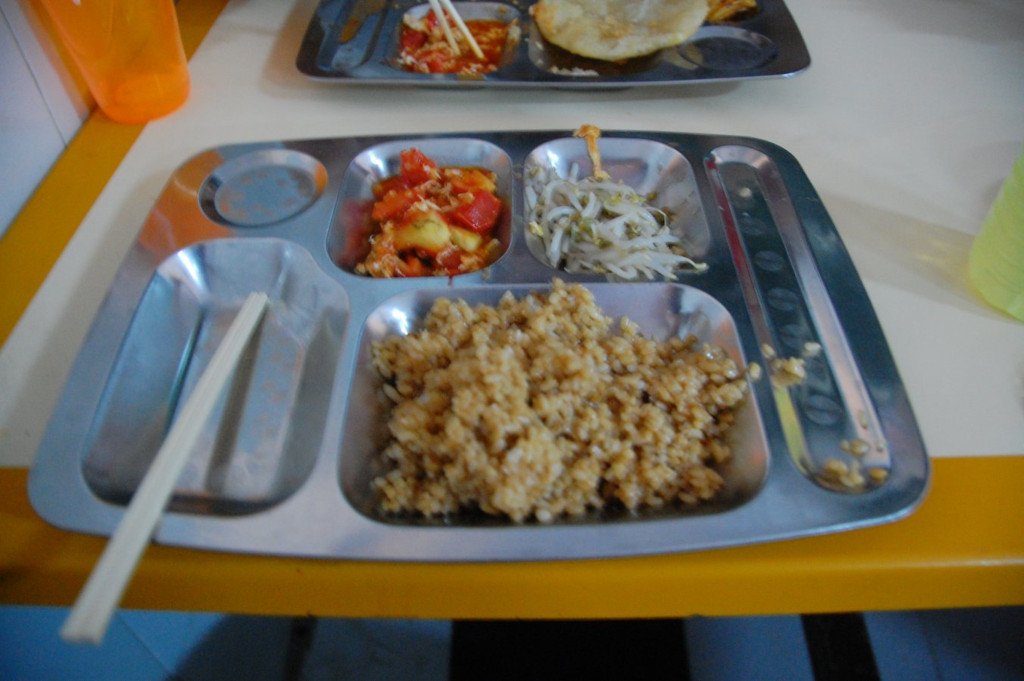 This tray of prison slop was my breakfast every day for a month at the Shaolin Temple school where I studied kung fu in China. No wonder the monks train hard to fight; they have to be pissed off starting every day with this stuff. I know I was. When you have 4,000 hungry students to feed, I guess you don’t have much time to ponder the culinary arts. (Xiao Long Wu Yuan in Henan, China) 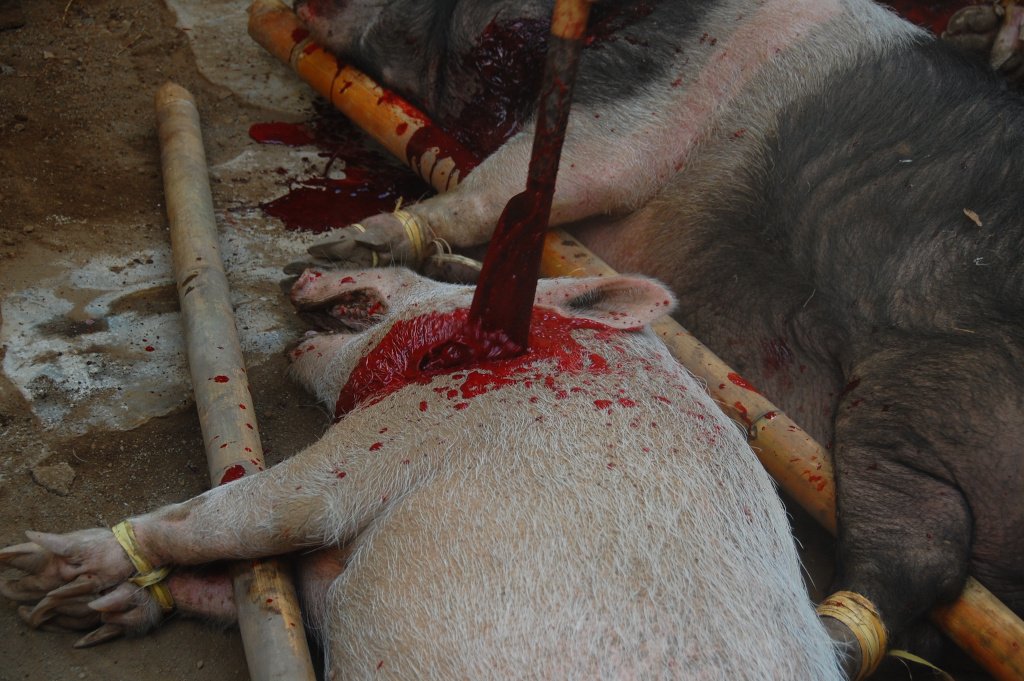 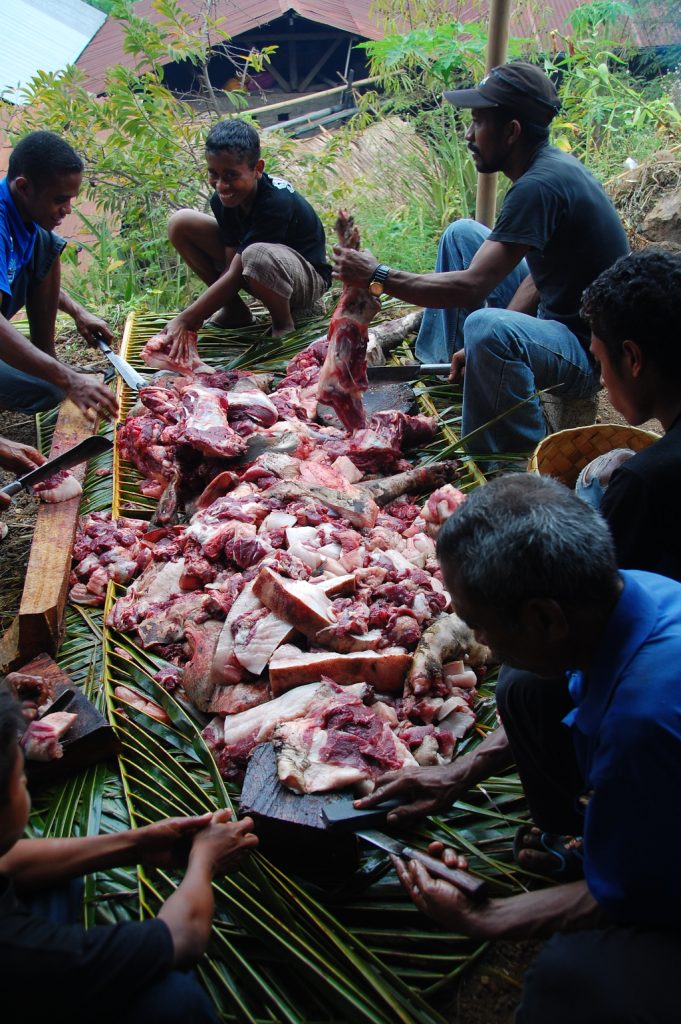 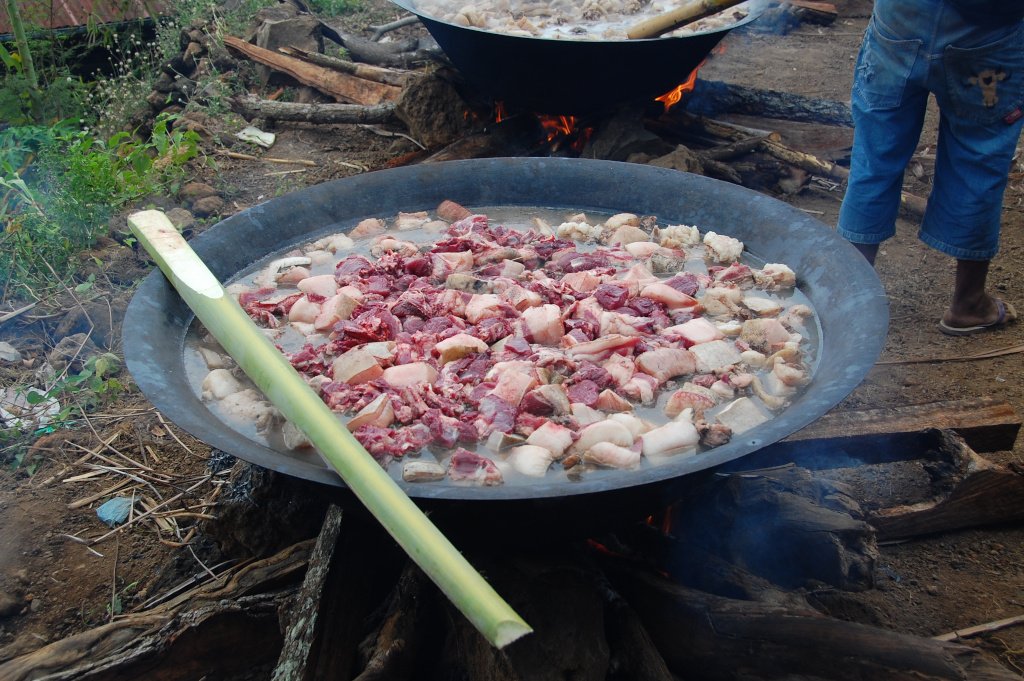 Hey, you were warned. These pigs were slaughtered while I was staying with a family in a remote, Indonesian village. The boiling cauldron of pig fat wasn’t dumped on storming invaders; the gelatinous stuff fed me for two weeks. Fortunately, the family I stayed with was so dear and kindhearted that I barely thought about the lack of refrigeration. (Flores, Indonesia) 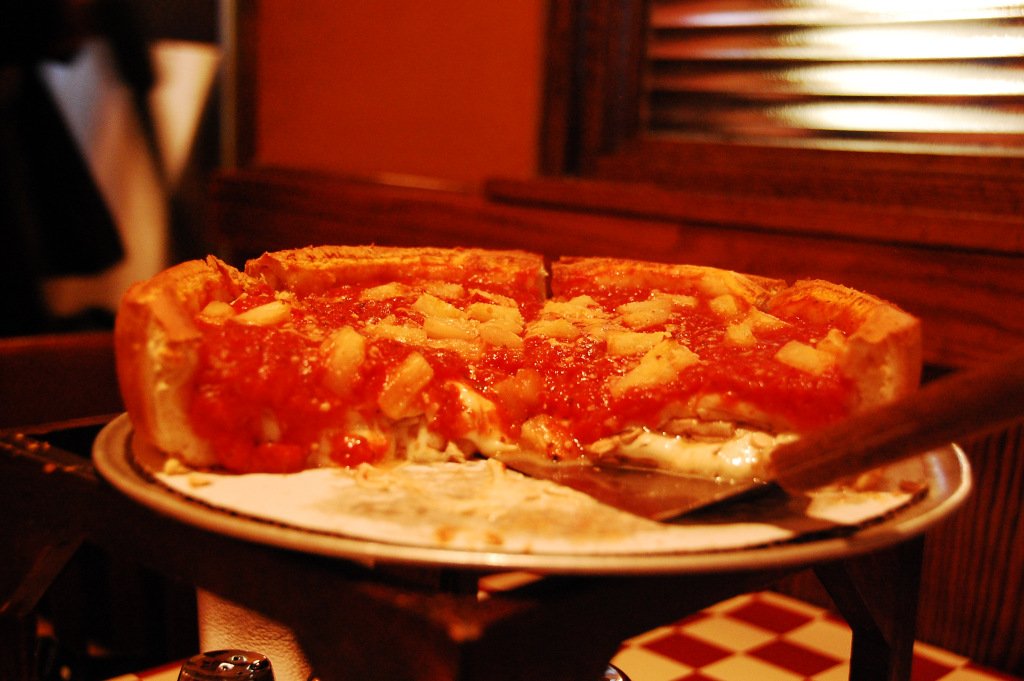 Chicago-style pizza is one of those things that seem like a good idea at the time but soon turn into tapping out “kill me” in Morse code with your head from your quadriplegic coma. The weight of each slice was astonishing, and at least half of that weight is cholesterol. But I admit, it was a tasty way to suffer. (Chicago, USA) 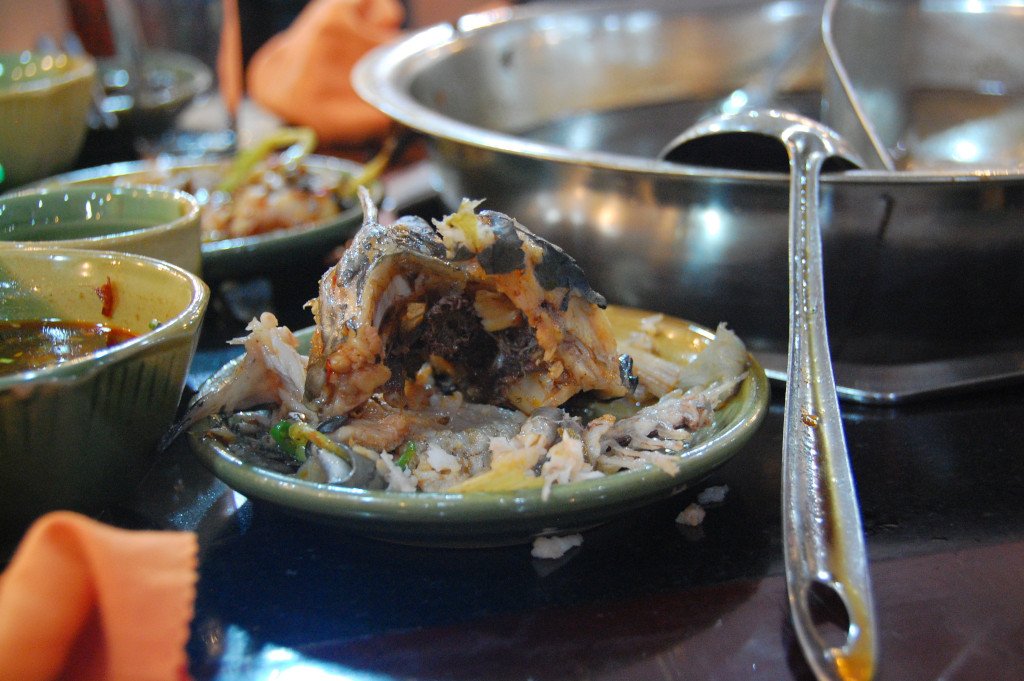 As man of the table, I was given the honor of eating the best part of the catfish — the head — after it was pulled out of the hotpot oil. I nibbled the whiskers off, poked around at the eyes and brain, then finally gave up on the smelly thing as everyone else around me enjoyed delicious catfish. The good parts. (Chengdu, China) 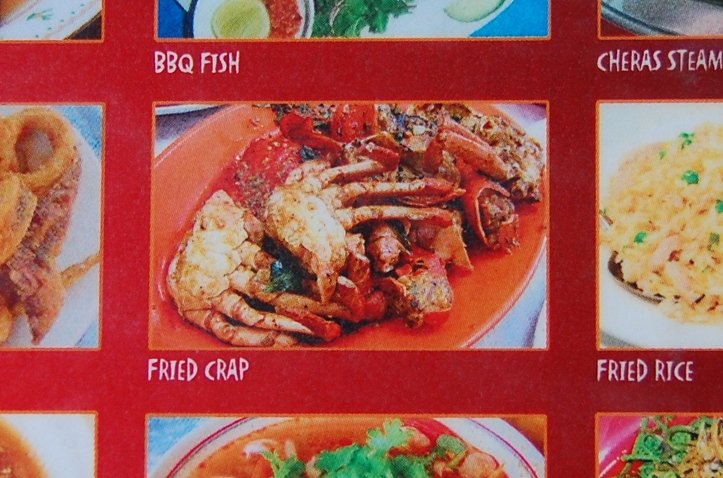 Be Very, Very Careful in India 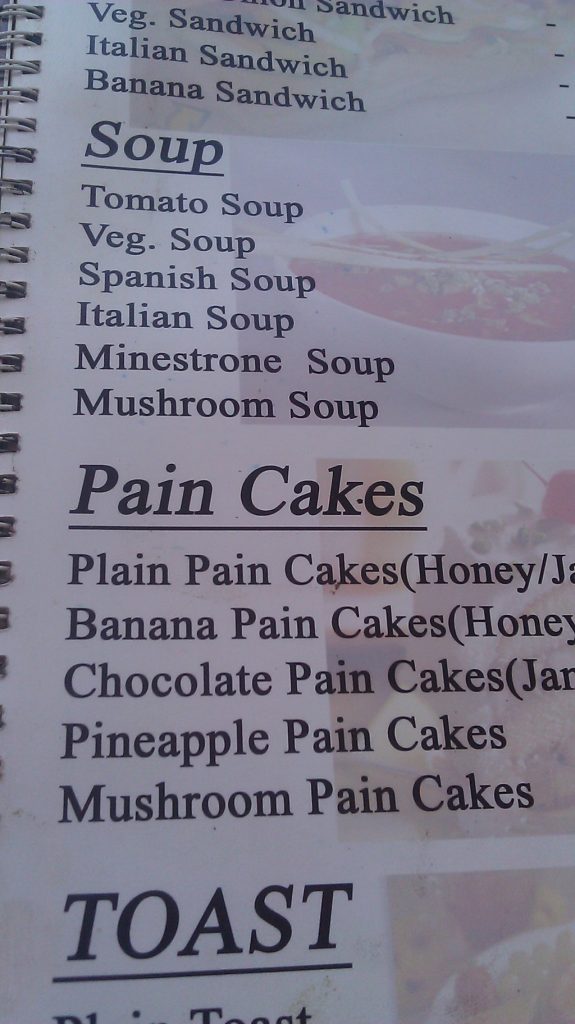 When an Indian restaurateur warns you that a particular food item will cause pain, run like hell. They aren’t joking. (Jodhpur in Rajasthan, India) 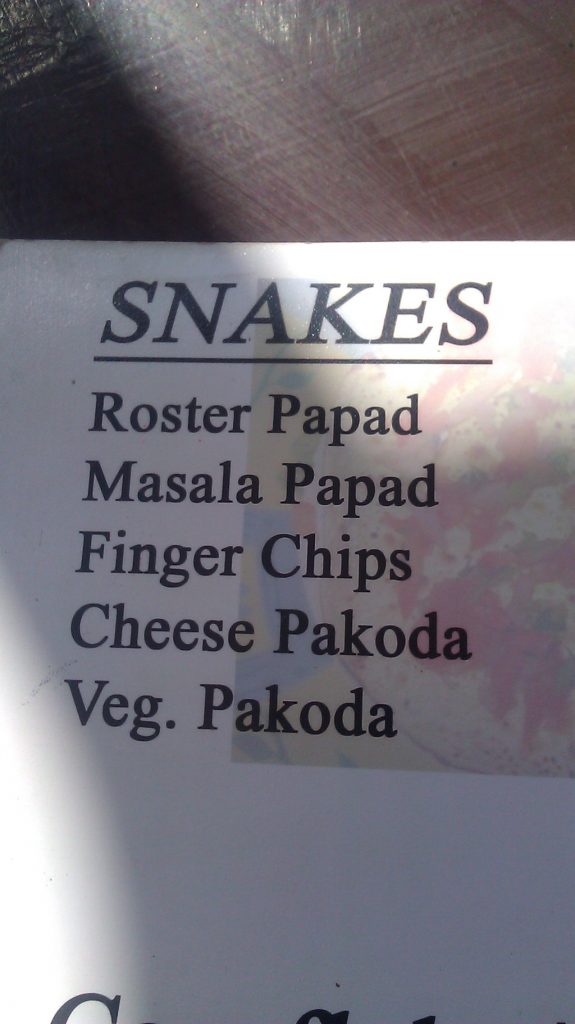 Another from the same Indian restaurant. Maybe they cater to masochists. (Jodhpur in Rajasthan, India)

Rodent on a Stick 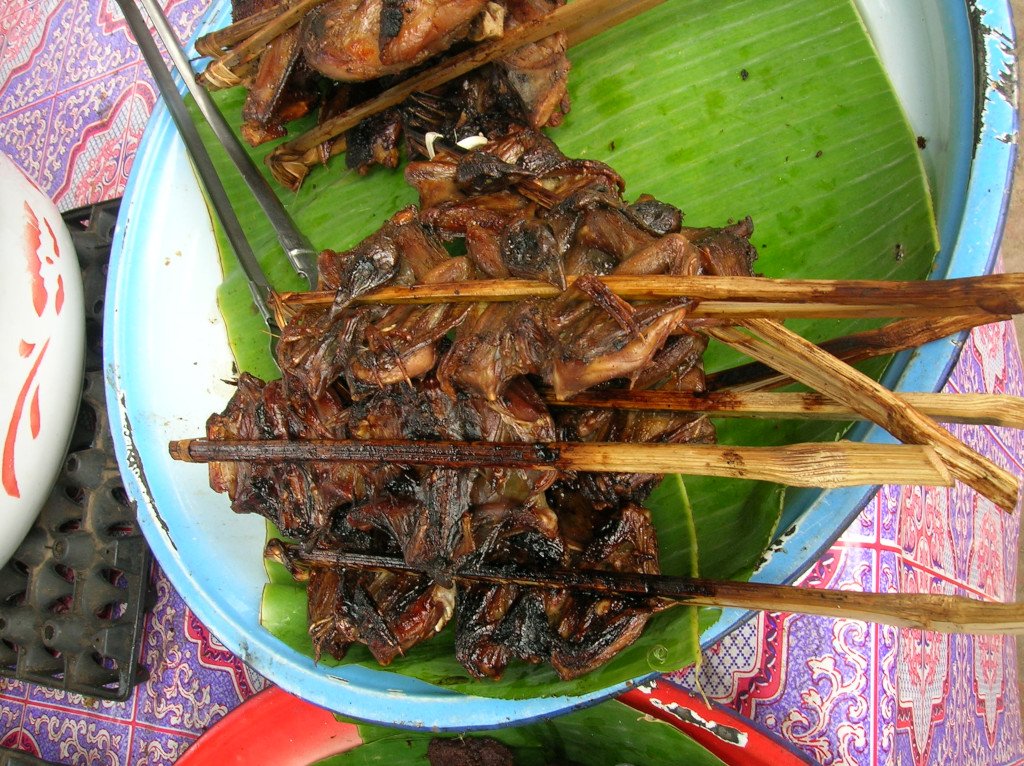 These barbecued bats on a stick gave me one of my worst cases of food poisoning yet. I laid in bed for a week and begged for a call to the embassy. In fact, they are the reason that there aren’t more frightening entries in this list of grotesque foods. The lesson learned? Don’t eat winged rodents sold at street markets. 2020 update: I know what you’re thinking, and no, it wasn’t me. I ate my bat in 2006. (Vientiane, Laos)

The McDonald’s Thing That Should Not Be 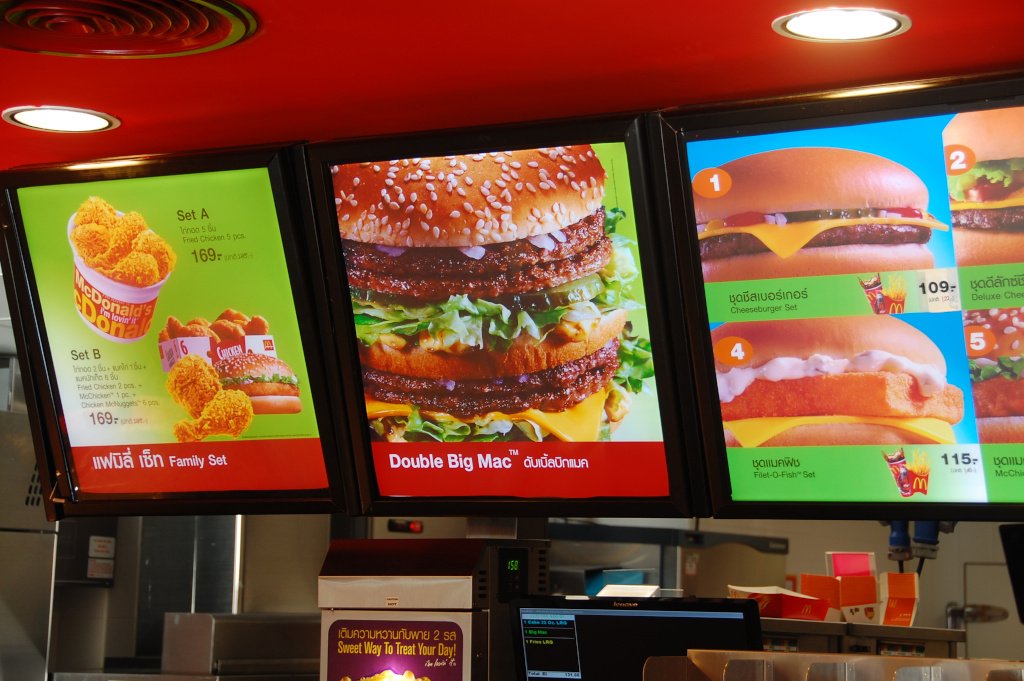 A double Big Mac! This weird travel food and Thing That Should Not Be is only available in Thailand and a few other select countries where skinny, depressed people want to punish themselves. The Double Big Mac is probably illegal in the U.S. Even McDonald’s isn’t cheeky enough to release them in a country where angry moms would sue after their kids developed additional chins. Give me a cauldron of pig fat over this any day. (Chiang Mai, Thailand) 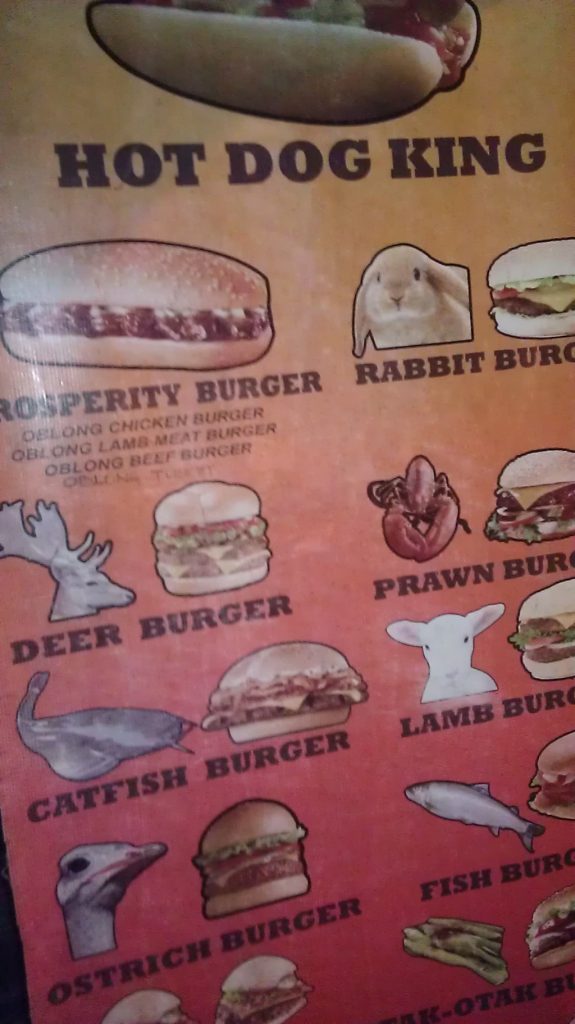 Apparently, this restaurant will throw practically anything into the meat grinder. The fuzzy bunny and lamb really make these burgers that much more marketable to families with kids. And why is it called Hot Dog King when all they seem to sell are burgers? Oh…wait, Burger King was already taken. (Kuala Lumpur, Malaysia) 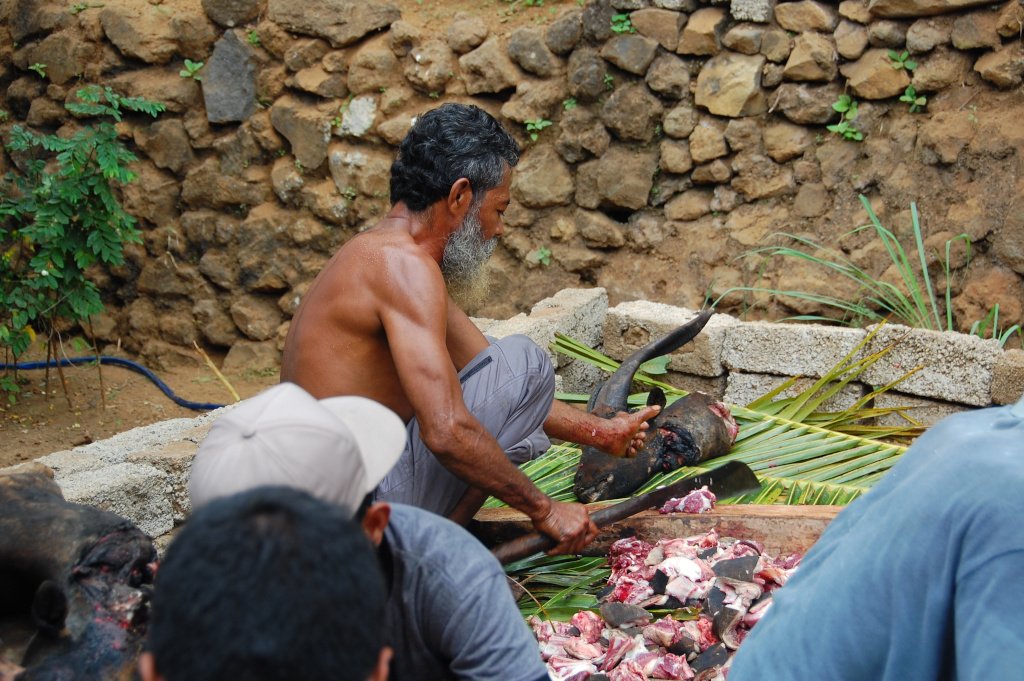 Another from the remote Indonesian village near Adonara. When a muscular man, son of a headhunter and quite possibly one himself at a young age, tells you that goat head is for breakfast — you eat goat. (Flores, Indonesia) 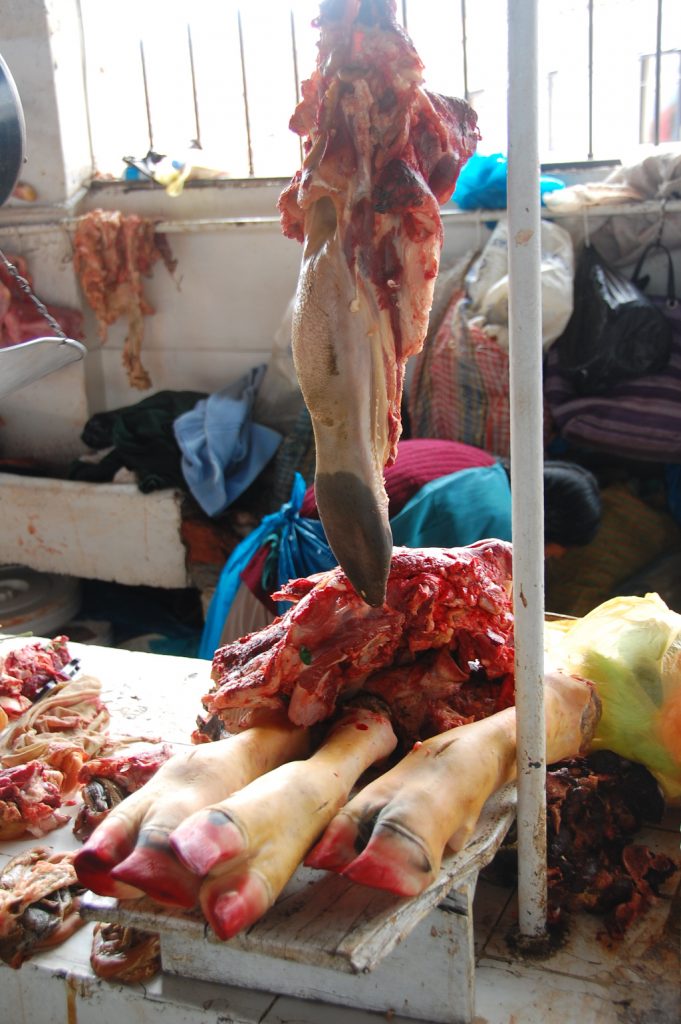 We took turns cooking group dinners at the hostel, so I had to run to the market in Cusco for groceries. I begged my partner to buy one of these hooves, carry it through the hostel common room where people were waiting for us to serve dinner, and let me photograph expressions of horror. No luck. But aside from the poo that was still stuck on the bottom, they didn’t look half bad. (Cusco, Peru) 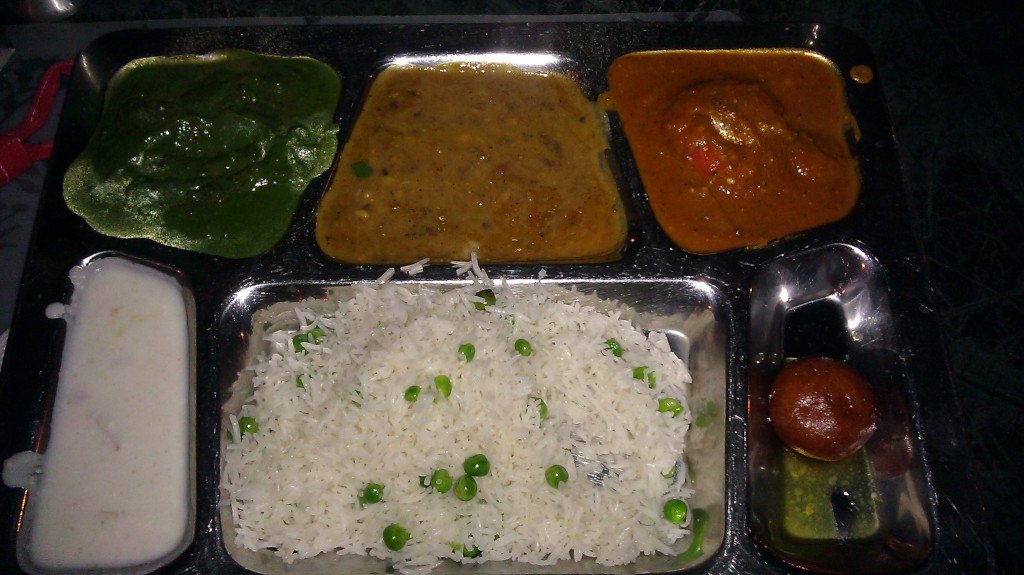 The first sign that Indian thali sets weren’t for me should have been the metal, prison-tray presentation (remember the Shaolin school?). Instead, purely out of necessity, I consumed scores of these damn things for nearly a month in Rajasthan. The rice and dessert ball are excellent; the rest has the texture of something squeezed out of a sick baby’s diaper. (Jaisalmer, India)

The Spaghetti From Hell 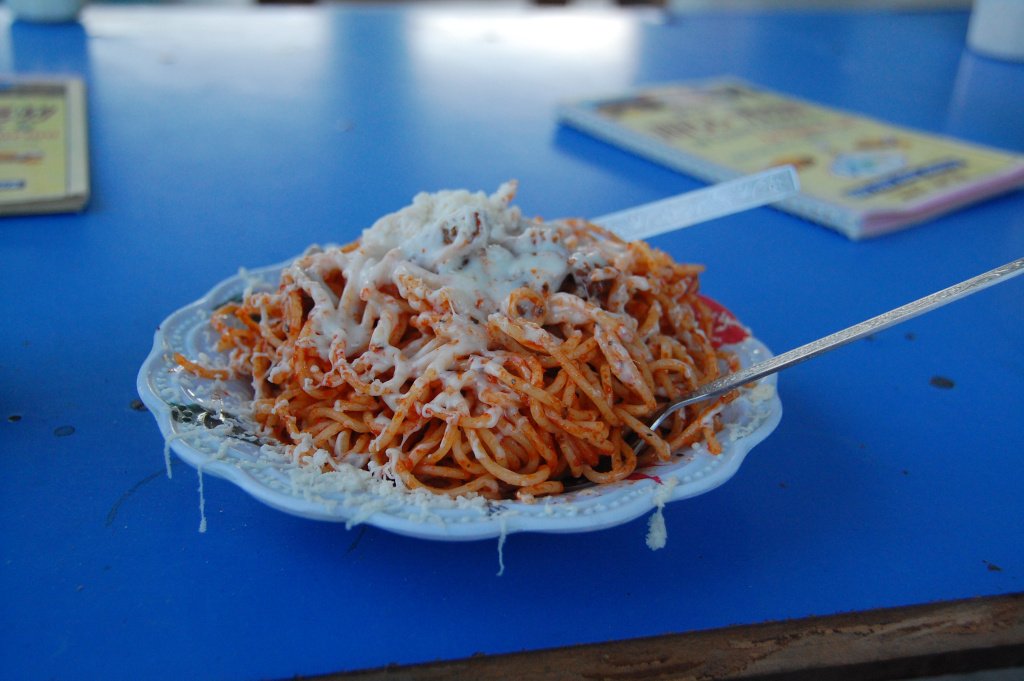 Another horror from India, this cheese-covered plate of old spaghetti actually squirmed and made squishing sounds without being touched! Yes, I know I shouldn’t have asked for Western food in Rajasthan, but I had been there for months and eaten one too many thali sets (see above).

Even given the weird travel food already listed, this remains one of my worst meals on record. Now I know why Gandhi didn’t eat for 116 days: he probably tried Indian spaghetti and gave up on food for life. (Jodhpur, India) 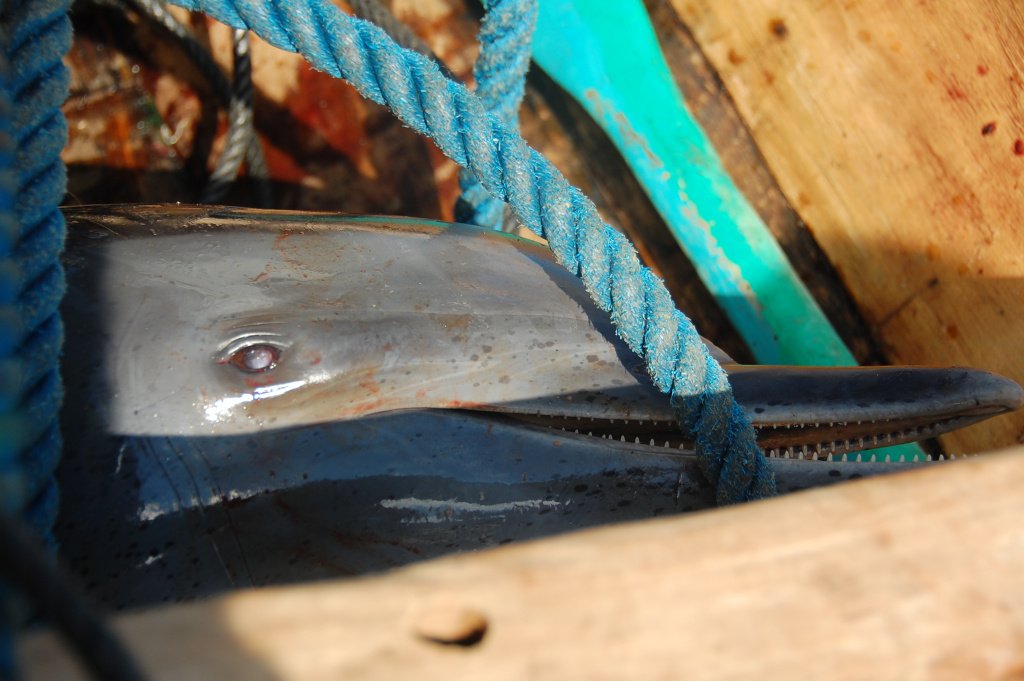 Yes, I went along with fishermen who were harpoon hunting for dolphins. Actually, they were hunting for whales, but this dolphin was in the wrong place at the wrong time — thankfully. I’d rather see a dolphin taken than a whale, but this remote part of Indonesia was given the green light to take whales by hand for sustenance.

After seeing the ribs showing on the hungry kids that greeted our boat, I didn’t mind helping them drag Flipper up on the beach. The meat is oily and terrible; not for me. And it contains more mercury than tuna, enough to make you forget who you are for a few hours after eating it.

And that’s it! Now that you’ve seen some of the weird travel food I’ve encountered, go enjoy some much tastier good vagabonding food. Food is a big part of any trip, and (thankfully) it isn’t all about pig faces.

Previous Post: Hiking From Old Manali Through the Solang Valley
Next Up: Travel Food: The Good Stuff