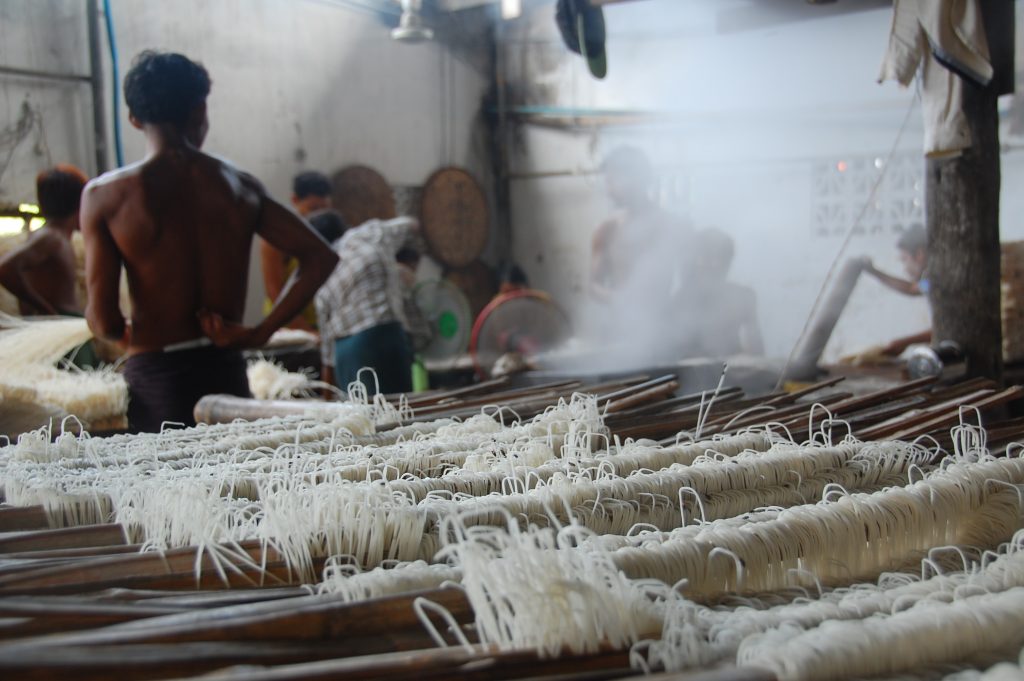 The Shan noodle factory in Hsipaw, a small town in Burma, was a literal sweatshop.

I was drenched within minutes as moisture poured from my body. Despite the sauna-like conditions, workers were cranking out rice noodles at an alarming rate.

For some reason, the friendly staff readily invited myself and some friends inside. With neither a tour nor spoken English, we were encouraged to snap photos as long as we didn’t get in the way of the human hurricane of activity.

Shadowy brown bodies would emerge briefly between clouds of steam bellowing from hand-operated presses. They’d smile at me and my friends with betel-stained teeth, grab up an armload of noodles, then disappear again in a roar of steam. 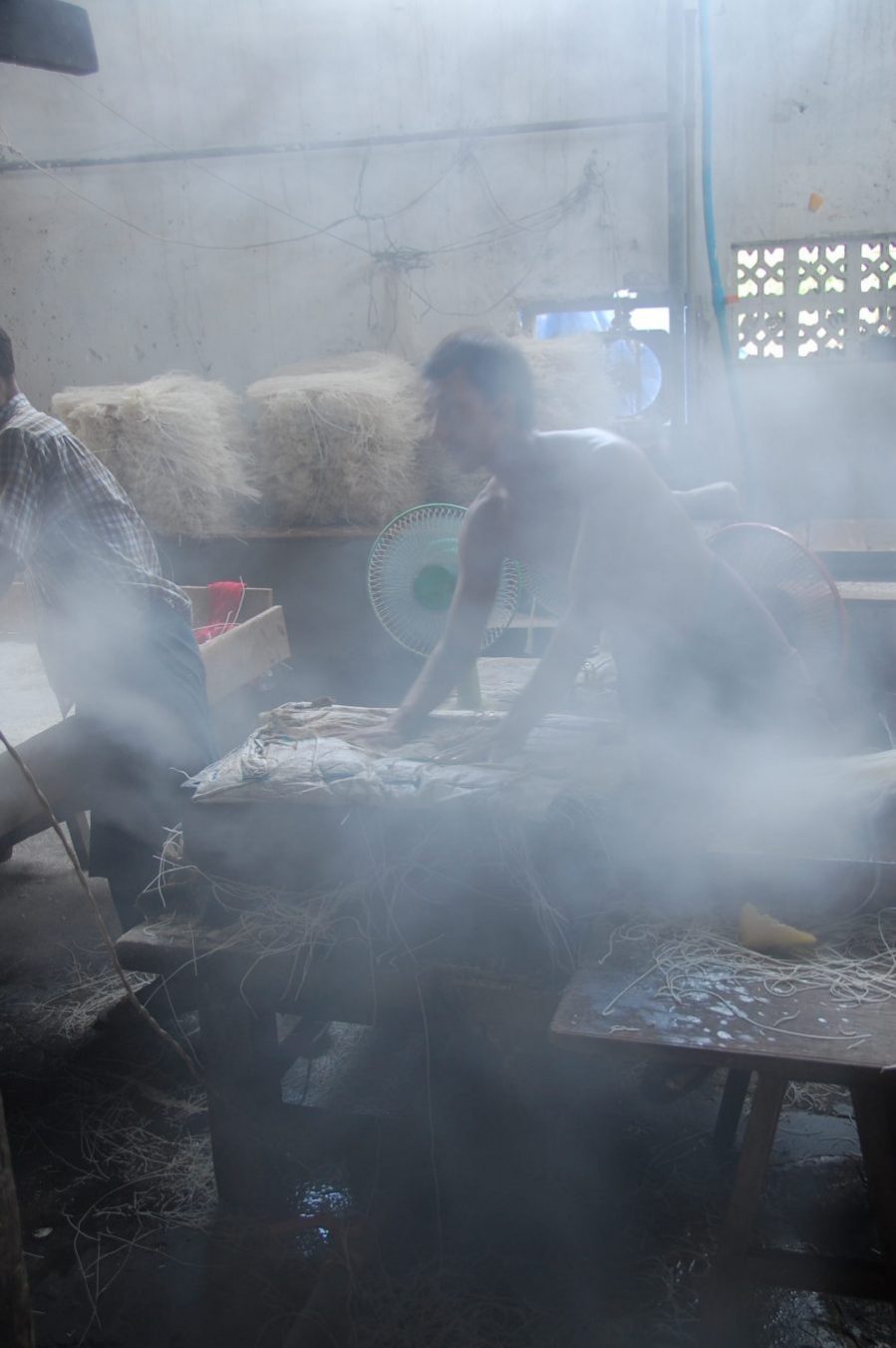 Noodles were protruding from baskets, boxes, machines, and wooden drying racks. The place looked like the mother of all noodle bombs had gone off.

Given that I’d already consumed at least my weight in delicious Shan noodles while traveling in Burma, seeing the source of all noodledom was an unexpected treat. I did my best to capture the chaos before my Nikon fogged up from the conditions. 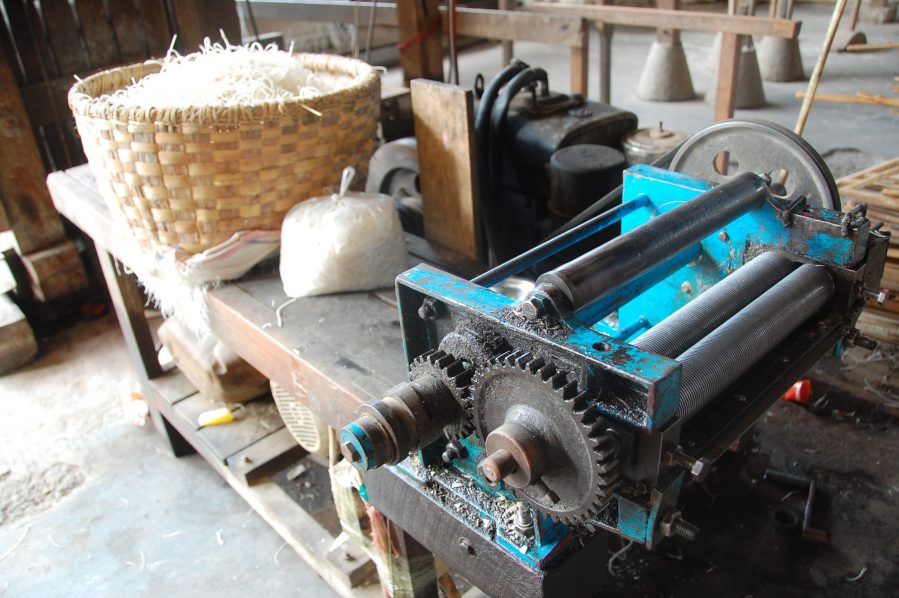 Why a Shan Noodle Factory in Burma

Rather than the usual, I’ve decided to begin sharing some “lost” memories in a series of photo essays. This week is about visiting a Shan noodle factory in Hsipaw, Burma. Pretty random, but anything involving copious amounts of noodles is exciting, so …

These side adventures that punctuate my trips are part of the essence of vagabonding travel. Unfortunately, they’re often omitted from this blog due to lack of time, bigger things to write about, or attention span.

I’m pretty sure I sent the Googlebot crawler to therapy with my last few travel adventure stories. Developers are still scrambling with repairs after it had to navigate the dark SEO jungle of this blog. 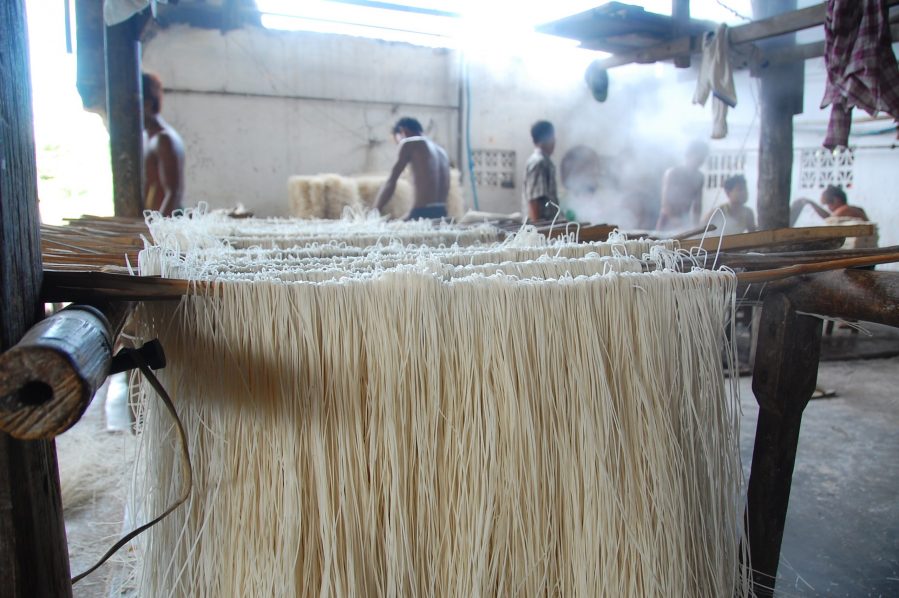 So far, I haven’t written much here about Burma. I thoroughly enjoyed the country, but my two-week trip there was like a flash in the pan during an eventful year.

Burma was one of seven countries I visited in 2015, the same year I turned 40, ran with the bulls in Pamplona, lived on a permaculture farm in France, drove the Normandy coast, and did some off-grid housesitting in the Yucatan where Hurricane Patricia kicked my butt.

It was a busy year, but one of my best on the road. 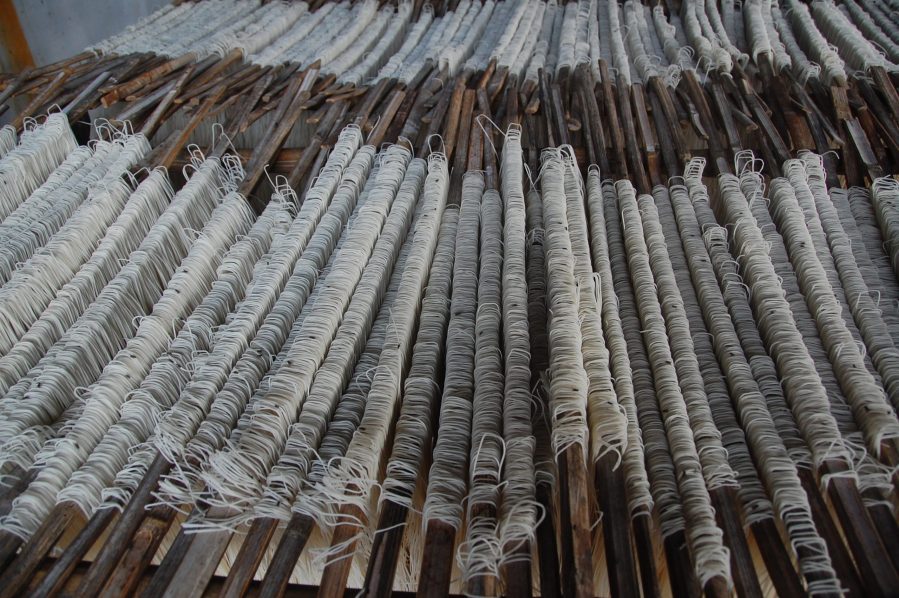 Burma, or Myanmar if you prefer, was exceptionally memorable. Moving around Southeast Asia’s largest mainland country takes time, and I didn’t have enough of it.

Getting to the small, river town of Hsipaw in the distant Shan State was a worthwhile investment. No less than two of the slowest, bounciest, most romantic overnight train journeys of my life were required. The scenery through the open-air windows was among the best I’ve seen blur by in Southeast Asia.

Hsipaw turned out to be my favorite place in Burma. Sure, Bagan had lots of temples. And I enjoyed getting lost many times in Yangon and Mandalay. Almost getting into trouble in Pyin Oo Lwin was also a highlight. I could still be rotting away in a Burmese prison in a place friends and family couldn’t pronounce. I’ll save that George Orwell misadventure for the next short story. 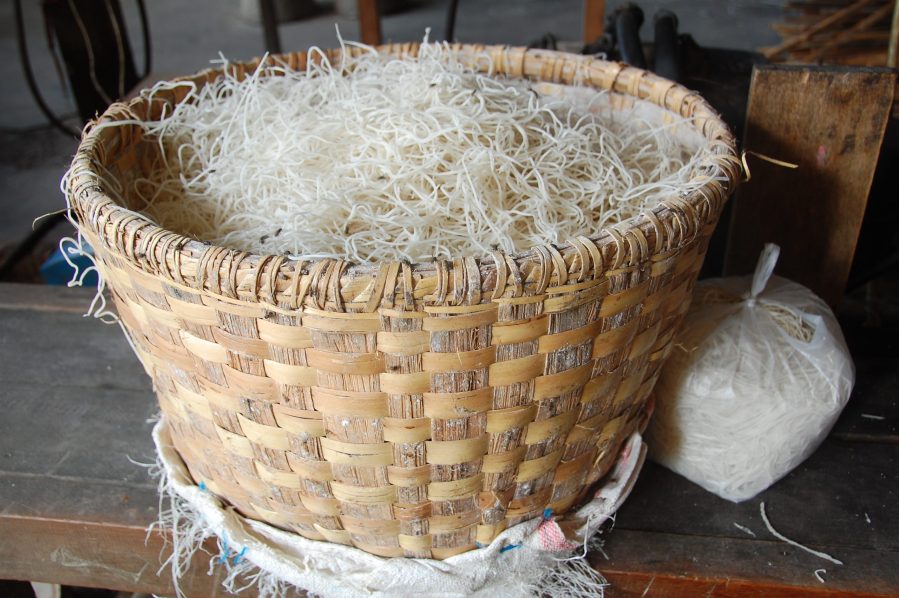 Many Mouths to Feed

Little did I know while traveling in Burma, I was also quietly hosting a thriving community of parasites. The opportunistic bastards ganged up on me thanks to a jungle river in the National Protected Area in Luang Namtha, Laos.

I was filtering the brown river water to drink but swam in it one night. The leeches were easy to see and pick off, however, that wasn’t the case with the hitchhikers inside of me.

Nothing hurt, but I was choked up with mucus for over a month. I pretty well left a slime trail across Burma. I didn’t know at the time it was an immune response to the invaders.

Hosting my microscopic friends was an interesting experiment. I could eat as much as I wanted, and I took full advantage.

For a couple of glorious months, I consumed more delicious food—including kilograms of Shan noodles—than any other time in my life. Fortunately, I was in Southeast Asia where food is inexpensive.

I fed my cravings day and night (often with noodles) but continued to lose weight. I thought maybe vagabonding had somehow blessed me with super metabolism. Not a bad prospect while turning 40. Little did I know I was getting a lot of help.

Despite the fun part of consuming everything within reach, my energy levels kept hitting new lows. The little buggers turned rowdy. They had begun stealing nutrition and were eating me out of house and home (my body).

With our symbiotic arrangement broken, I went to a hospital in Chiang Mai, Thailand, and unceremoniously nuked them with a handful of pills. 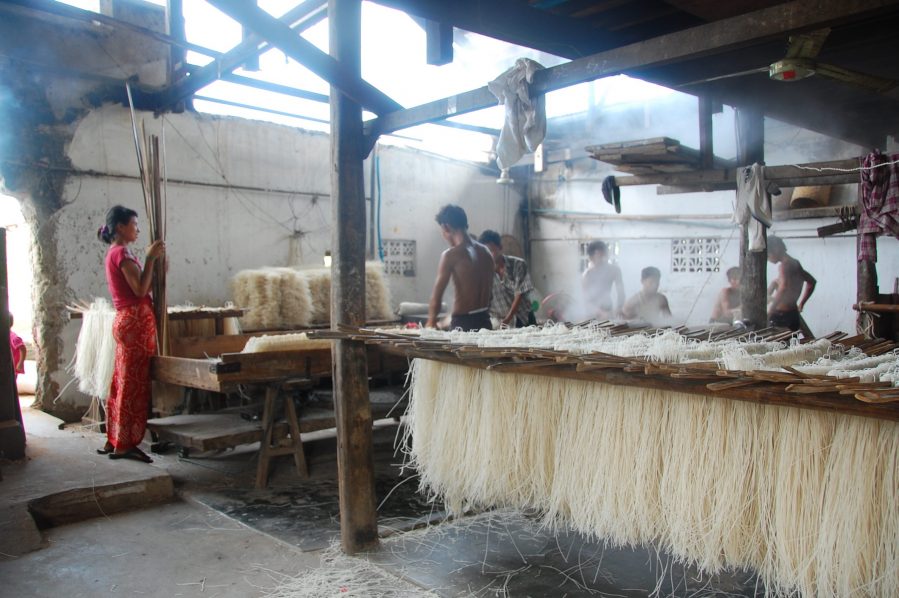 What Are Shan Noodles?

First, the Shan people (or “Tai Yai” in Thai) are Burma’s largest ethnic minority. Among their many culinary talents (here’s a nice page about Shan food), they know how to make some damned good noodle soups and salads. I enjoyed them often and wholeheartedly put them in the good vagabonding food category.

Like most travelers, I ate my delicious $1 bowls of Shan rice noodles without properly considering the labor, love, and literal sweat that goes into making them.

Us Westerners too often assume gigantic machines churn noodles out by the reel, day and night. At least, that’s what I see when the Discovery Channel or History Channel go inside food factories to film.

Not in Burma, and countless other places. Every single delicious noodle you slurp in a simple restaurant has probably been touched by humans at some point.

The rice used to make these rice noodles was also planted by hand by a stooped-over human who spends long days standing in muck beneath a hot sun. I now try to pause and give thanks for those people before I enjoy eating the results of their labor. 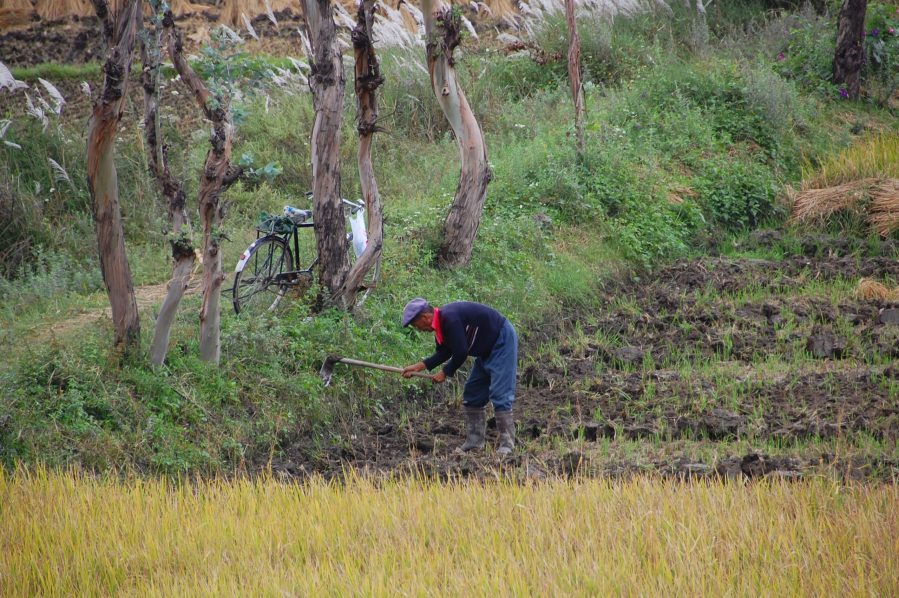 How to Visit the Noodle Factory

I don’t know of any post-pandemic caveats so adjust accordingly. Before 2020, any travelers who wanted to visit the noodle factory in Hsipaw only had to turn up there during working hours.

There are no tours, receptionists, or scheduling. Just make your way there, smile, and ask if you can see inside. You’ll probably need to use some charades and gestures. Pointing in Southeast Asia is rude, so gesture with your full palm turned downward and fingers together.

If you get invited inside, stay out of the way. I had the distinct feeling noodle quotas had to be met. Unlike modernized food factories with conveyors and giant robots, the Shan noodle factory in Hsipaw is powered by nice people and cooking fires.

Smile at the workers, snap some pictures, wipe your sweat, say thanks, then exit. 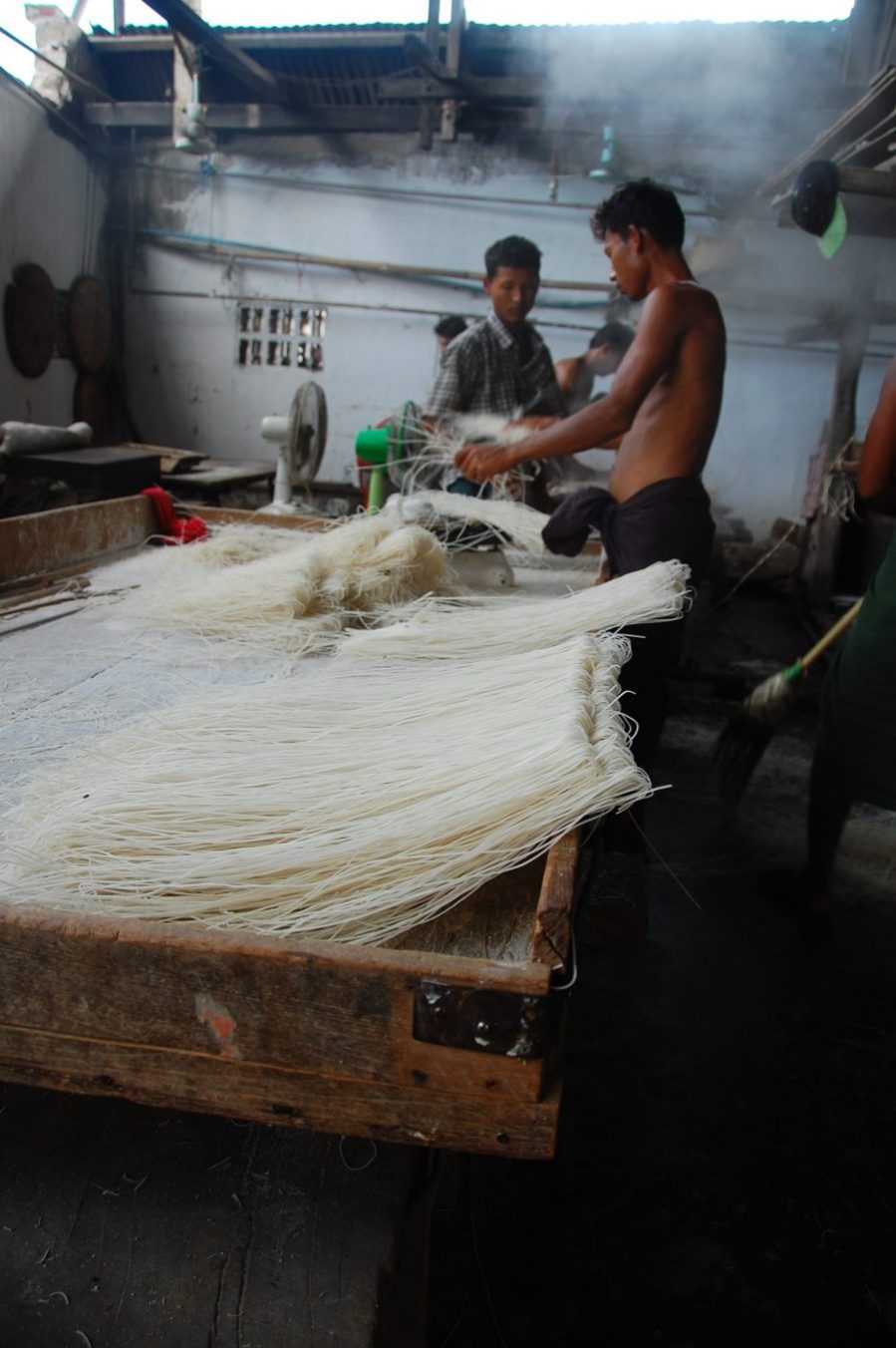 Where to Find the Noodle Factory in Hsipaw

Hsipaw isn’t that big. Depending on where you’re staying, getting to the noodle factory is an easy enough bicycle or motorbike ride. You could also probably walk and enjoy sights along the way.

Google Maps isn’t entirely accurate for Hsipaw, so take that into consideration.

The hand-painted sign is in Burmese. You’ll just have to look and listen for a buzz of activity inside one of the wooden structures. 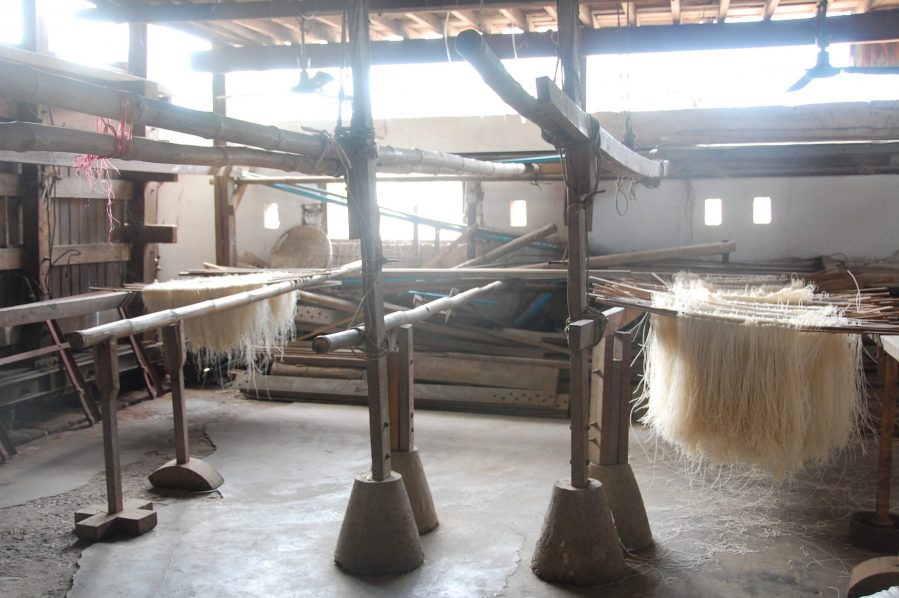 If your road dead ends at the Tar Boat Monastery, you missed the right fork.

These are terrible transliterations, but if you want to try asking for directions or write the script on a piece of paper:

Here are some decent directions to the Shan noodle factory in Hsipaw (with photos and location on Google Maps). 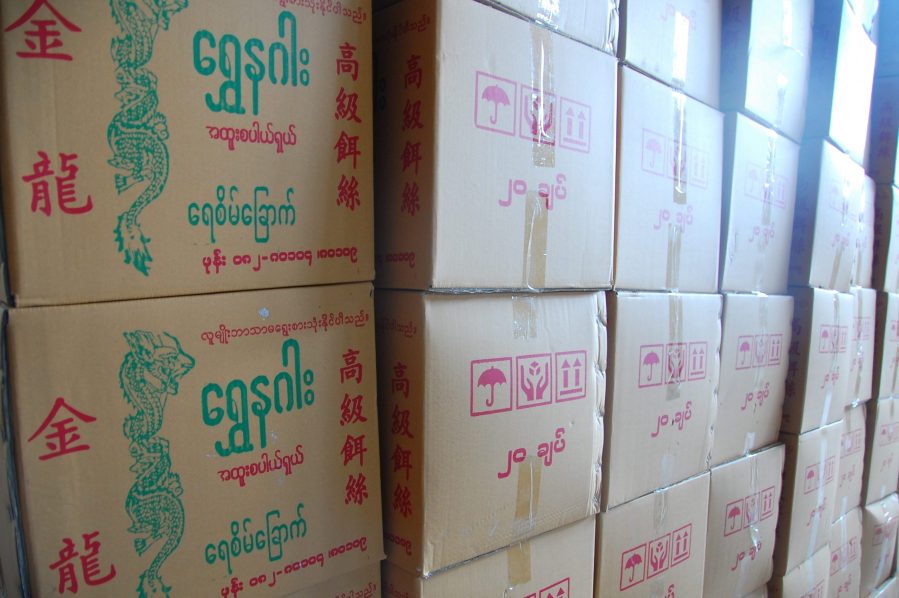