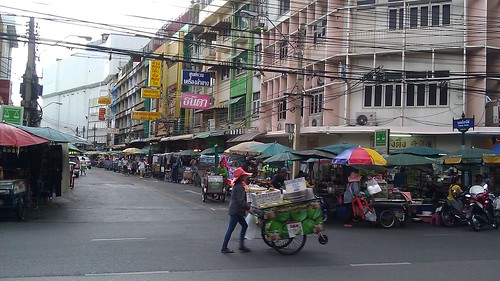 Bangkok felt strangely familiar. The shadow of a lover I once knew, maybe from a dream, long ago. The groove was there, but climbing into it was going to take time. Unfortunately, I never got a proper chance. Something more than bamboo splinters from my tattoo was lurking in my veins…

I lasted two days on the ground before the fever set in. Who knows where these things come from, but the timing was terrible. Just as I was getting back into the holy-crap-I’m-in-Thailand-again mindset, I found myself confined to a tiny guesthouse room in Bangkok. My concrete cell for 48 hours. I could lie in bed and touch both walls with my hands. Sweating out and delirious, I watched the slow-turning ceiling fan above me for more than 24 hours. A scene straight out of Apocalypse Now, but I didn’t even have a mirror to punch.

No food. No water. Another 24 hours passed. I could hear the familiar sounds of travel coming from reception downstairs. Buckles snapping; plastic bags crinkling; cigarette lighters clicking; drunken French laughing. No one knew I was there in that room above them, decaying away. Not a nice feeling at all, but realizing that no cavalry is coming to the rescue, that there will be no smiling faces to bail you out, really makes you dig deep. Survival instinct dragged me out of bed. I oozed down the stairs, bought water, drank all three liters, and returned to my room. A guesthouse phantom who will hopefully pay before he leaves.

When I was finally able to wander around a bit, I noticed that something strange was afoot in the streets. Bangkok has changed, or rather, the types of travelers here have changed. There is a small sprinkling of backpackers, and the obligatory gorgeous Scandinavians who come to escape winter, but for the most part, budget travelers are a minority. Chinese wandered around in hordes, armed with selfie sticks. Russians plodded the streets in high heels. Money-slinging European families outnumbered solo travelers at least three to one. Prices reflected the change in clientèle, but you’ve got to pay to play in the high season.

The older travelers here look like they just got back from a safari. Olive-drab, quick-dry pants with scores of zippers. Indiana-Jones hats and utility belts. These guys look like they’re ready to do combat in the floating market. On more than one occasion, I had to wait 10 minutes behind someone as they worked the complex buckle system on their amphibious utility sandals. I finally squeezed past Low-speed Joe just as he was digging around on the bat-belt for a multitool to get his sandals unfastened.

You can tell a lot about a traveler just by looking at their shoes.

Regardless, it feels damned good to be back! Love or loathe it, all travelers end up buzzing back toward Bangkok’s flickering glow eventually. 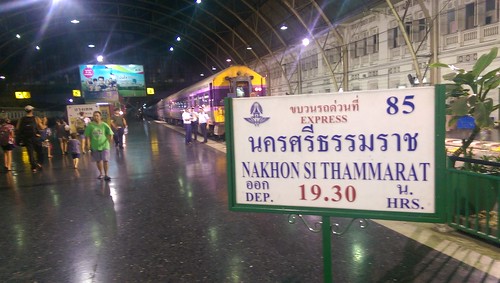 If I was feeling 25 percent better when I left Bangkok, I was 75 percent better on the train. Thai trains are my favorite, and my top bunk was a cozy womb. My diesel mother rocked me gently to sleep with a click-clack lullaby as rice paddies and forgotten villages whirled past outside. The air smelled of green chlorophyll and life.

I hit 110 percent alive on the boat to Koh Phangan. I agree with Theroux’s romantic sentiments about train travel, but boat travel trumps them all. Racing across the Gulf of Thailand on a rusted ferry with your nose pointed at an island is a damned good feeling. Particularly when the metallic sounds of shovels scraping away a record snowfall permeate home. 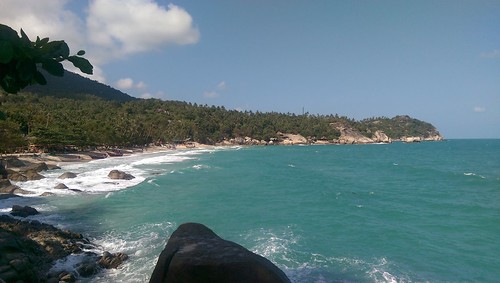 Thankfully, I hit Koh Phangan between moons, so Haad Rin was amazingly quiet and douchebag free. Travel in Thailand during the busy season is cyclical: people head south before the full moon for the big party, then west to the islands or north to Chiang Mai directly after. I visited the Danish girls in Same Same, then grabbed a speedboat to Haad Yuan, the next beach north. My old health haunt, The Sanctuary, was overrun with yogis and yuppies, so I ended up in a bungalow farther down the beach. My winter skin, now a deep purple, peeled off layer after layer as those delicious UV rays worked their magic. I had a reunion with Laura, a great catchup after more than a year. 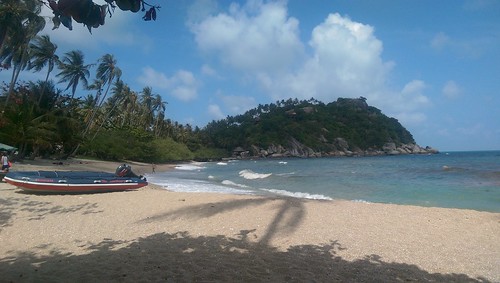 Next stop: Chiang Mai, then Penang for a visa run. 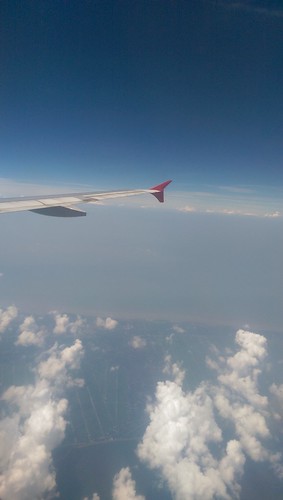 The ground crew loading the luggage onto the plane looked more like train robbers than airport employees. The Southeast Asian sun is anything but gentle, so workers wear big hats and cover their faces with bandannas. These masked men were steadily slinging suitcases onto the loading conveyor, just beneath my window seat in 22D. Our plane was hungrily gobbling up luggage as fast as it could. I watched with sleepy interest mainly for one reason:

I could see my backpack.

There it was…my well-worn companion, half buried beneath a small mountain of Hello Kitty suitcases. As the loading continued, the bandits plucked every bag from around mine accept three or four, then they inexplicably turned off the conveyor. My interest levels perked up. A tractor was backed up to the luggage wagon, and suddenly my bag was whisked away by a runway-crossing maniac behind the wheel. Another masked maniac yanked the conveyor away, and I heard the luggage compartment beneath my seat slam shut.

I pressed my face against the plastic window of our plane, but it was too late. Had they looked up just slightly, they would have seen a single passenger, sat in 22D, with an unexplained gasp of horror on his face.

Now I’ve had pretty good luck with baggage not being lost over the years. And given that I have a six-hour layover in Kuala Lumpur, I’m quite sure that the airline is competent enough to get my stuff to Penang – my final destination. But there’s just something way more comforting about knowing that most of your material belongings are on the same plane as you. Or, at the very least, in the same country. 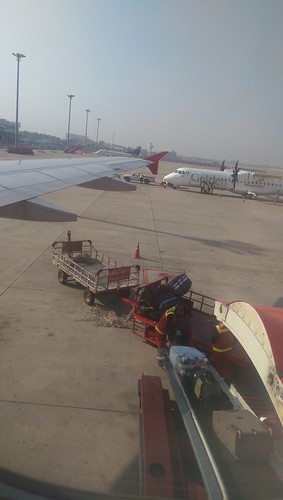 Seeing underpaid workers whisk your backpack away is like pulling the curtain aside at an Indian restaurant to have a peek inside the kitchen. Or analyzing what’s inside of an egg roll. You just shouldn’t do it. Better to enjoy your chana masala without knowing what goes on behind the scenes. The same applies to the inner workings of airlines.

As I focused on positive, bag-attracting thoughts to manifest results later in Penang, I became keenly aware of a constant thumping on my seat from behind. Then a set of two-year-old lungs let out a 200-decibel wail that was probably heard all the way in the cockpit. I’ve never heard anything so terrifying, and everyone on the plane recoiled in horror at the same time. It even scared the hell out of all the well-behaved kids on the plane, who now didn’t dare make a peep and get confused with this bad apple. A cacophony of screaming punctuated with gasping coughs, chokes, and wavering shrieks, the little monster was a tantrum ninja. He was a masterful puppeteer with auditory misery as his strings. An angry Scotsman stomping the living hell out of his electric bagpipes couldn’t have produced such horrible sounds.

We were still on the runway at sea level, so no little-hurting-ears concessions were given. With only a few hours of sleep the night before, I knew what I had to do.

A long-standing tradition on Air Asia is to change to better seats as soon as the fasten-seatbelt sign goes off. On prior flights, I would sometimes hold the barf bag in my hands at the ready, feigning sickness, just in case some unscrupulous individual entertained the idea of taking the empty seat next to mine. Sometimes opossum-like hissing sounds work, too. But this scenario was completely different. Every passenger within a six-row radius, front and back, was thinking the same thing. We all eyed the seatbelt indicator like Olympic runners, butts in the air, waiting for the starting pistol to be fired.

When the good captain dinged that light off, I was the first out of my seat. By the time the sounds of unclicking had finished throughout the plane, I had already scored a seat in the very back, the last row all to myself. I quickly armed myself with a barf bag and bared fangs, just in case. My eyes were already red for good effect. No one dared joined me.

Arriving in Kuala Lumpur, my home for six hours, was pleasantly surprising. LCCT, Air Asia’s grungy old hub airport, was finally put out of its misery last June. The new KLIA2, where I stepped off the plane, was delightfully free of rats and people living permanently in the terminal. Similar to arriving at Changi – Singapore’s gorgeous airport – I had essentially flown into a lavish shopping mall teeming with food choices. I quickly found an organic ramen noodle place and followed that with a Padang eatery for some Indonesian food. I even grabbed a bag of juicy oranges in the supermarket for $1.50. The first shots have been fired on my mission of gluttony in Malaysia.

With eco toilets that actually flush paper without turning into geysers, recycling bins everywhere, and lots of power outlets, they really did a good job on this place.

Air Asia’s smiling, red-clad attendants famously double as models for the in-flight magazine and company promotions. I’m sitting in their home base. This probably isn’t the best place for getting any work done.

Previous Post: A Midnight Run to Atlanta
Next Up: Goodbye for Now, My Sweetheart (Long Beach on Koh Lanta)