Vagabonding Resumes: Back in Bali 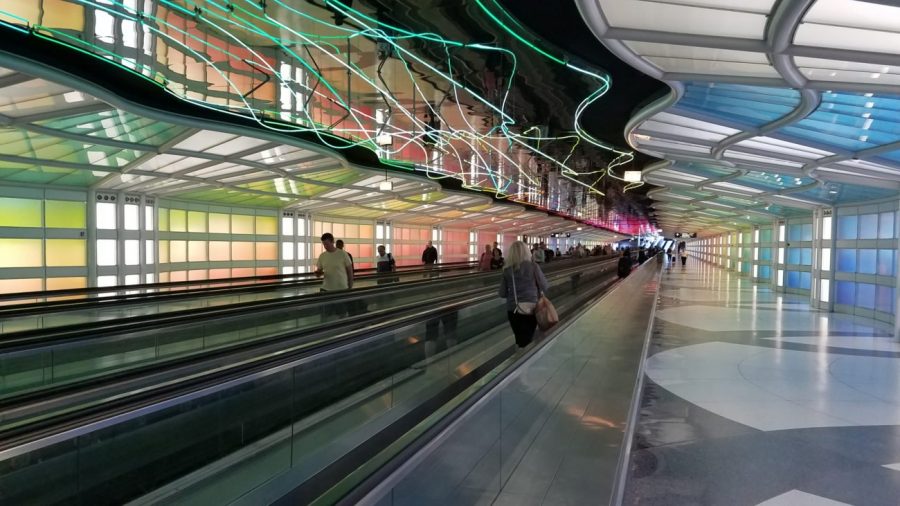 Everyone seemed to be looking at me as I glided through O’Hare International Airport in Chicago. I slowly became aware of the unwanted attention.

It was a strange phenomenon. So I straightened my back and held my head higher. I was making a statistically improbable amount of eye contact with strangers walking toward me in the terminal. As I raced along, the amount of attention increased, and so did the paranoid analysis in my head.

First things first, I crept a hand to my jeans and did a stealth check of the button fly. All good.

Maybe with my newly grown long hair, people thought I resembled someone familiar. After all, I had dressed a bit nicer, per Shanghai Ken’s sage advice for receiving better treatment in transit. I balked when he first gave me this travel pro tip, thinking surely cargo shorts still held some clout as they once did in turn-of-the-century Amazonia.

Today, I’ll be the first to admit: dressing the part while in transit actually works. Our disastrous China Eastern flight to Bangkok in 2012 had put us unexpectedly waylaid in a Shanghai room together. I looked like a desperate backpacker. I was forced to drink Chinese tap water. Other passengers fared much better.

But despite new effort, my jeans and button-up were no match for the business travelers transiting Chicago in silky suits.

Why were fellow passengers still staring, sometimes with mouths slightly agape like fish? Could it be admiration? Horror? Was it because I looked like the Crypt Keeper after a sleepless night and early start at goodbyes with loved ones?

I began to doubt myself. Maybe it was all in my head. Travel bloggers are the worst kinds of narcissists, ranking just behind social-media influencers and television evangelists. I’m guilty. I like to pretend my mom doesn’t just refresh her browser thousands of times to drive up pageviews.

I had to stop using Google Analytics; they were onto us.

I decided to seize the weirdness as a positive opportunity. Smiling at strangers is good karma. Ideally, they’ll pass it on, causing a compounding cascade of smiles that fly around the world until a horseman in Mongolia finally gets his. Makes sense from an auto-suggestion, Law of Attraction point of view, too.

A man in a suit was walking my direction. We had already made eye contact, so I attempted a warm smile. Cheeks lifted and eyes squinted with a creak. Sinew pulled on muscles yet-to-be-used on this morning.

Instead of the intended gesture of goodwill, a twisted, toothy, wolf-like smile was produced. I imagine I looked something like Batman’s Joker.

With great effort, I held my smile. The businessman visibly jumped. His cream-colored iPhone nearly flew out of his hands, and his pace quickened as he looked over his shoulder. Simultaneously, a middle-aged woman nearby yanked a child to the other side, putting her thick hipbone between me and the valuable offspring.

I was still pondering the strangeness of the morning when my United jumbo took flight with a mighty bounce of its aluminum wings, tilting solemnly toward the west, which as American travelers know, ultimately leads to the East.

I was Tokyo bound. 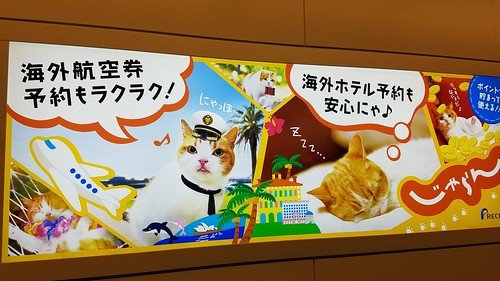 My ANA flight, operated by United, was perfection. And I’m not being sponsored to write this – they’ve seen my web rankings.

Rather than kicking people off the flight, United was kicking butt. I usually dig all the way to my appendix for the lowest, bile-colored reserve of hatred for nearly all of the airlines based in the U.S. But somehow, United and the Japanese-based All Nippon Airways pulled me back into the light.

From check-in to the final moments on the plane, I received nothing but courteous, rock-star treatment. Not bad for my cheapest ticket to Asia in 11 years.

The real wasabi and slice of raw salmon atop my meal sealed the deal. Even eaten from a plastic box, it could have held its own against Japanese restaurants at home.

That’s usually the case on airlines based in Asia. Food is serious business. I’ve eaten unfamiliar oddities on Korean Air flights that still remain unidentified. The meals arrived with a terrifying-but-delicious assortment of pastes in metal tubes, and a small bag of dried seaweed; sprinkle to taste.

When given a choice between the “Korean/Japanese/Sri Lankan meal or the Western meal,” as is often asked, always go with the unknown. Unless you’re on China Eastern – assuming they remembered to load food onto the plane in the first place.

The smiling cabin crew pushed a laden cart down the aisle twice an hour. I noticed that every carton of juice had a happy panda on it. That was pretty well all the nutritional information conveyed, leaving sugar content a mystery.

I typically chose the red panda, but alternated to the orange occasionally. Green tea came in torrents in case one of the pandas was inflammatory for my back.

Spanning 1.5 days – two attempted sleeps – this was my longest jaunt to Asia ever. Despite abundant legroom, sitting for 30 hours jumbled up the discs in my back. But even twisted to near paralysis, my second return to Asia in 2017 was overall delightful.

One of my movie choices was Let Me Eat Your Pancreas; the description was in Japanese. As tempting as that sounded, the food cart was on its way, and I didn’t know the genre. 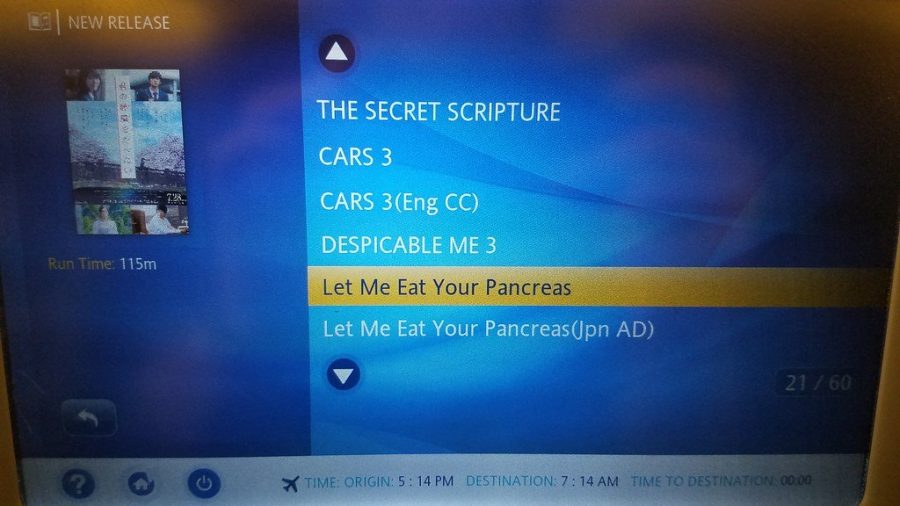 I opted for Despicable Me 3. Good choice. I found out later, ironically enough, that Pierre Coffin – the French-Indonesian co-director who voices all of the minions – is giving a talk in Ubud here on Bali next week. I’m going to meet him at the Ubud Writers and Readers Festival.

Tokyo’s Haneda Airport made me wish I had built a stopover between connections. It was wonderfully relaxing. Japan takes priority; I’ve waited long enough to open this treasure.

Haneda, like I’ve seen Narita, was orderly and functional in the early morning hours. The water machine purred health advice into my ear as I leaned forward for a drink. The high-tech toilets promised all kinds of delights at the push of an emoji button. Even better, there were strange ads featuring cats on the walls.

As I write this in Bali, looking at flowers floating around on a Buddha pool, I’m only just barely aware that Mount Agung, a large volcano 45 miles (73 kilometers) north of me, is heating up for the first time since 1963.

But aside from the lower-than-usual number of Western tourists, you would never know it. The only thing spewing shit in the air these days seems to be the media. 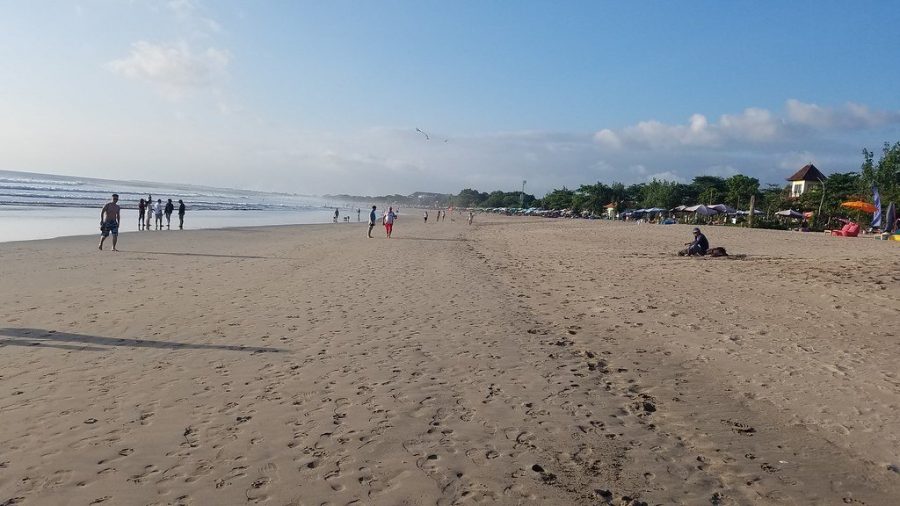 Vagabonding resumes. The sky above me is cloudless. Diving with giant mantas is just a few days away. I think I’ll be just fine swapping fall foliage for banana trees and rice terraces this year. 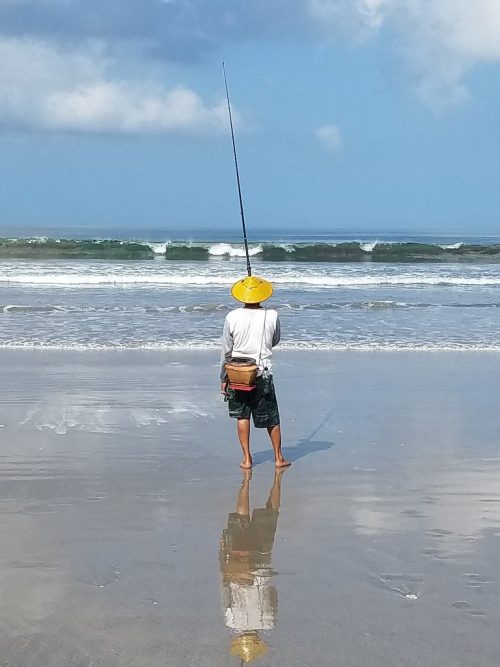