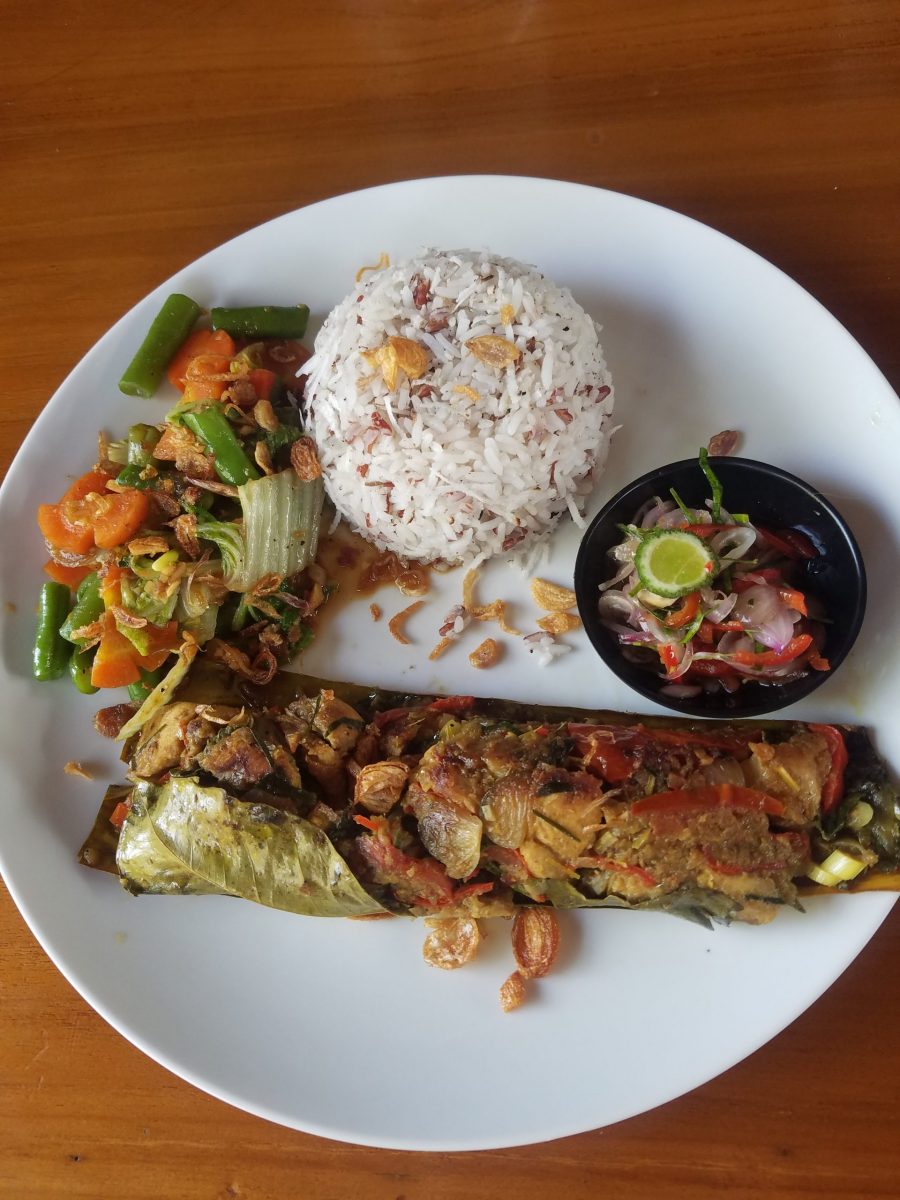 Eating new and unfamiliar things is obviously a big part of seeing the world, so I’ve decided to compile a portfolio of travel foods and meals I really enjoyed while vagabonding.

No matter how simple, some of these were the best meal experiences of my life. As Anthony Bourdain said:

Good food is very often, even most often, simple food.

Forget the chemical-laden, processed junk Americans too often call “food.” That stuff keeps the pharmaceutical companies in business. I’ve eaten some pretty bad and weird food while traveling, but at least it was made by humans, not machines fed with pink slime. Give me the delicious travel foods below any day. 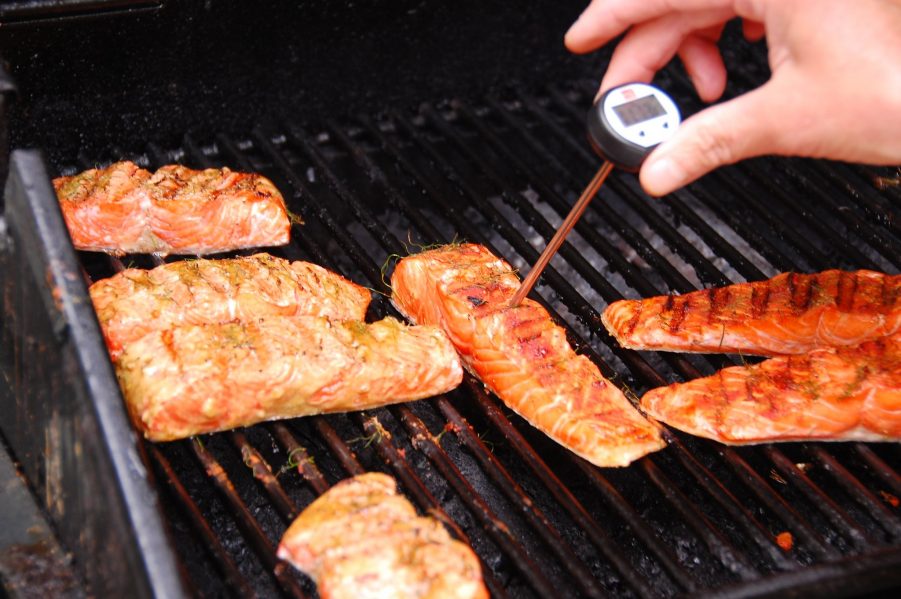 Unlike pink-dyed, farmed salmon, this freshly caught Alaskan Salmon made my head spin with omega-3s. It was grilled to perfection by an Alaskan. (Anchorage, Alaska) 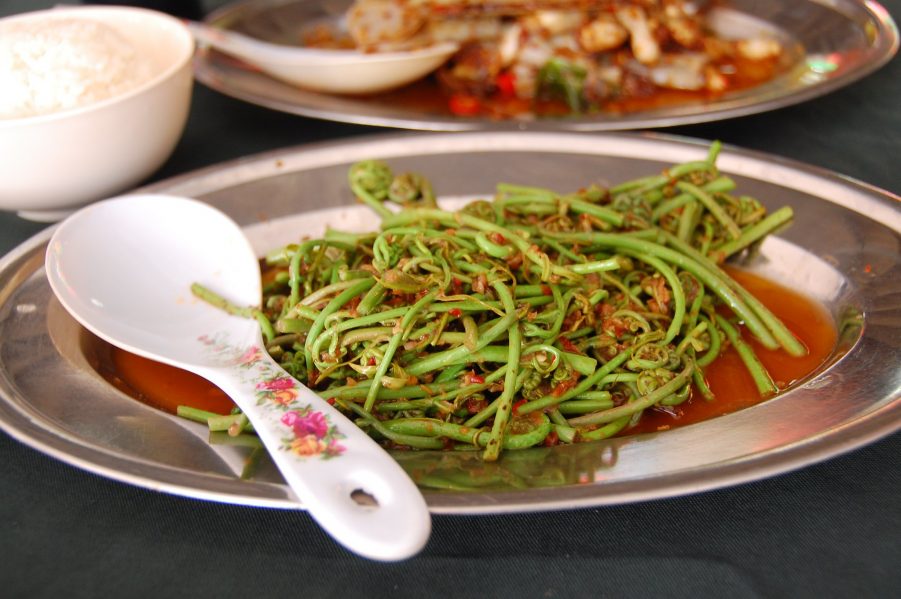 Midin is a jungle fern/vine that grows in Borneo. It’s nutty and stays crunchy after cooking. Delicious, and who knows what wonderful micronutrients it has absorbed from the rain forest. You’re essentially eating a plate of tasty medicine. I got to see midin growing wild in the jungle while kayaking in Sarawak. (Kuching, Borneo)

Steaks in the Alaskan Backcountry 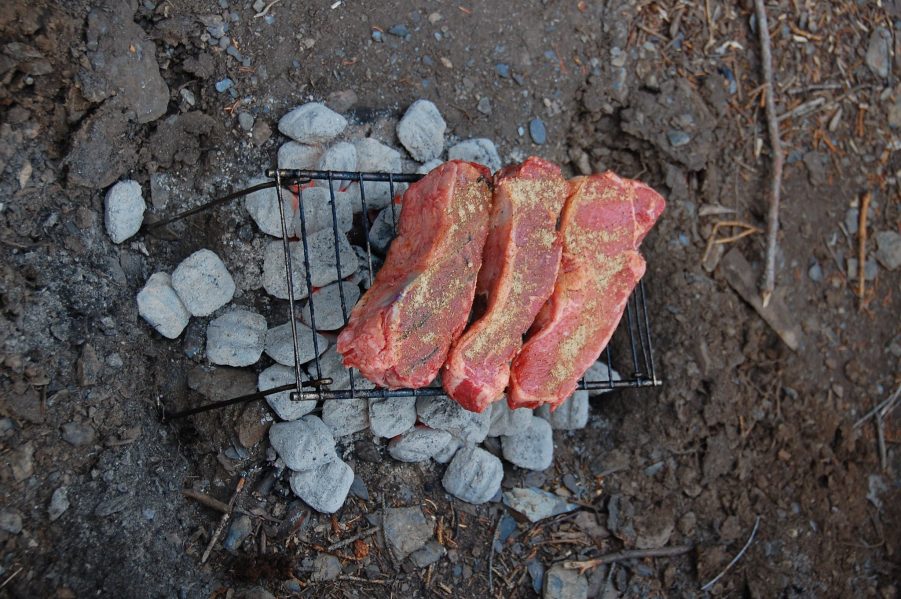 Bloody steaks cooked over a campfire deep in Alaska’s bear country. They took a long time to cook but were the best of my life! The smell of them cooking outside must have taunted a lot of grizzlies. (Backcountry, Alaska) 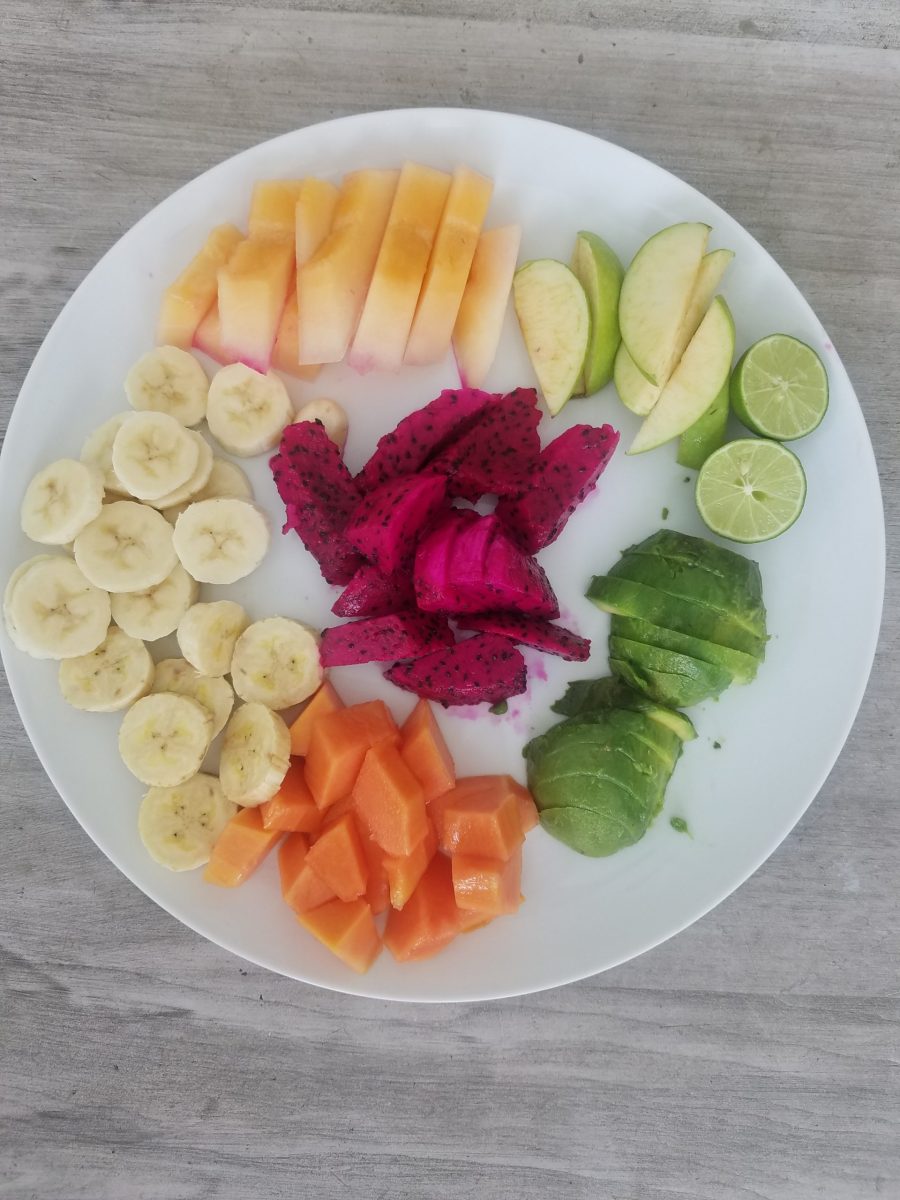 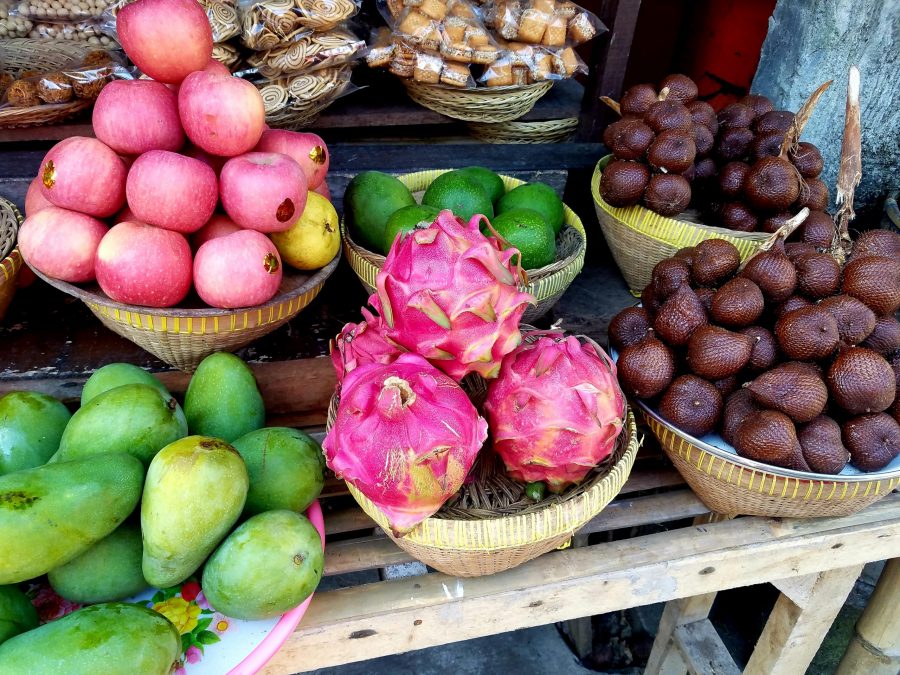 The fresh fruit in Southeast Asia deserves its own post. For the most part, fruit is cheap, abundant, and tastier than at home. I use vividly colored fruit to keep my immune system strong while traveling in remote places. The scaly fruit in the basket on the far right is salak, better known as “snake fruit” from a type of palm tree — one of my favorites. (Everywhere in Southeast Asia) 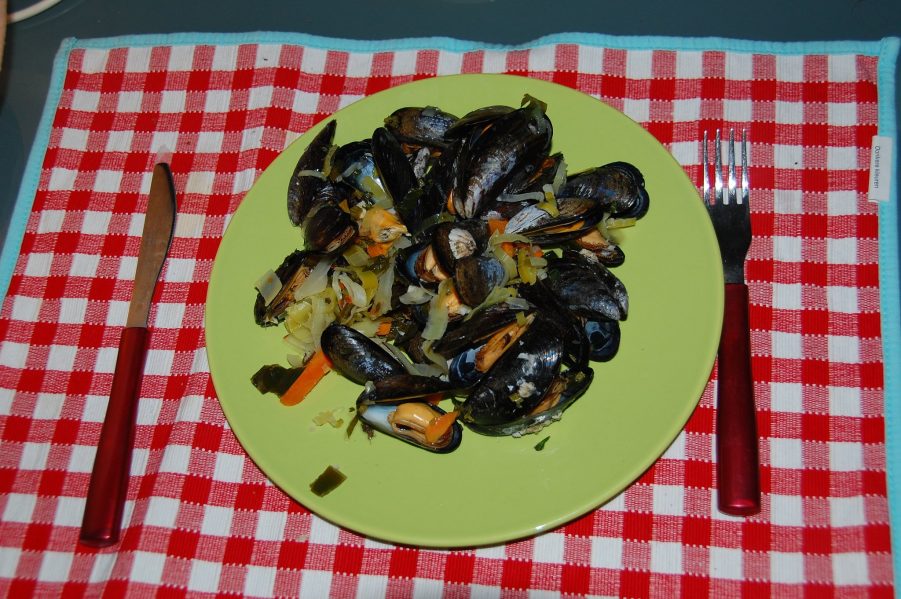 Wine-steamed mussels prepared at home by a serious seafood eater in Amsterdam. The Dutch are compensated for crappy weather with cheap, delicious shellfish. Sounds like a good trade to me! (Amsterdam, Netherlands) 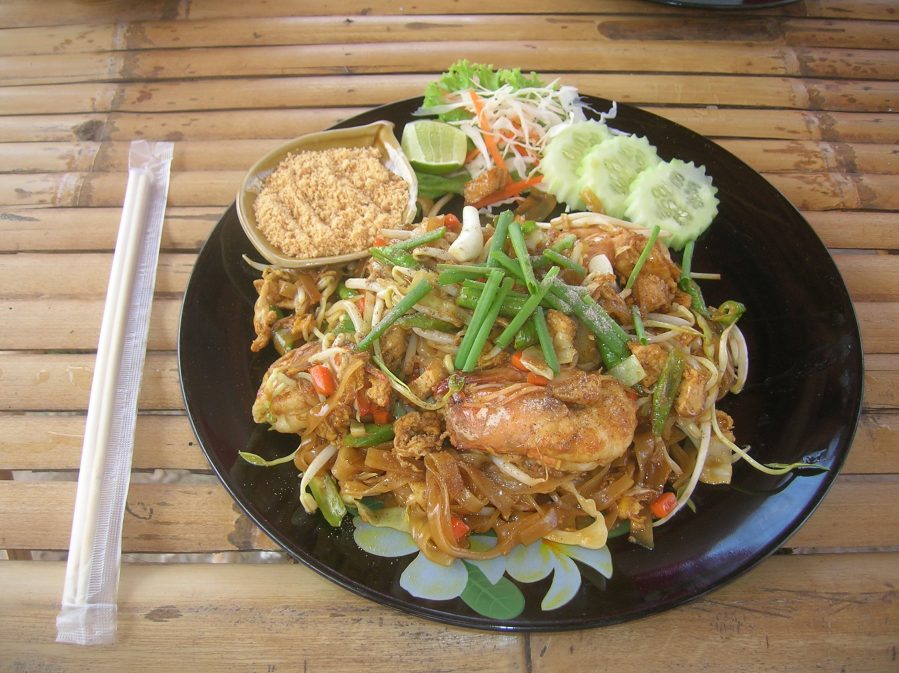 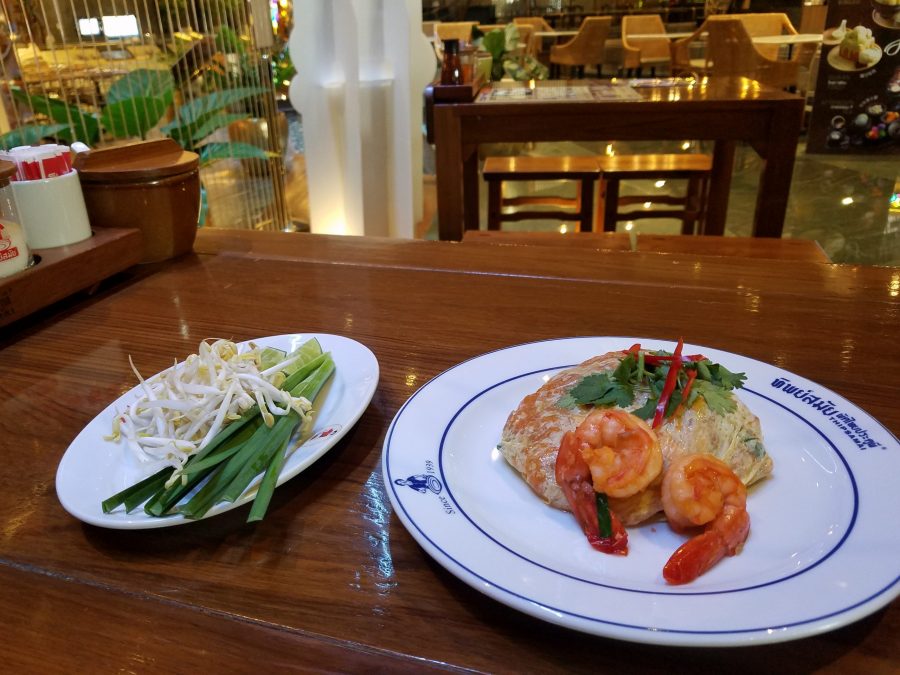 You simply can’t beat this classic. The most famous dish from Thailand is famous for a reason: it’s incredibly good! The pad thai chicken above (top pic) was $4 — on the pricey side for pad thai in Thailand. On my first trip to Thailand in 2006, a pad thai from a street vendor cost around 25 cents. Traditional or “presentation style” pad thai (bottom pic) is often wrapped in an omelette and includes tiny shrimp inside. This was enjoyed at Thip Samai in Bangkok, technically my first Michelin-starred restaurant. Yes, you can find pad thai and even street carts in Michelin’s Red Book now. (Bangkok, Thailand)

Sushi and Sashimi in Bangkok 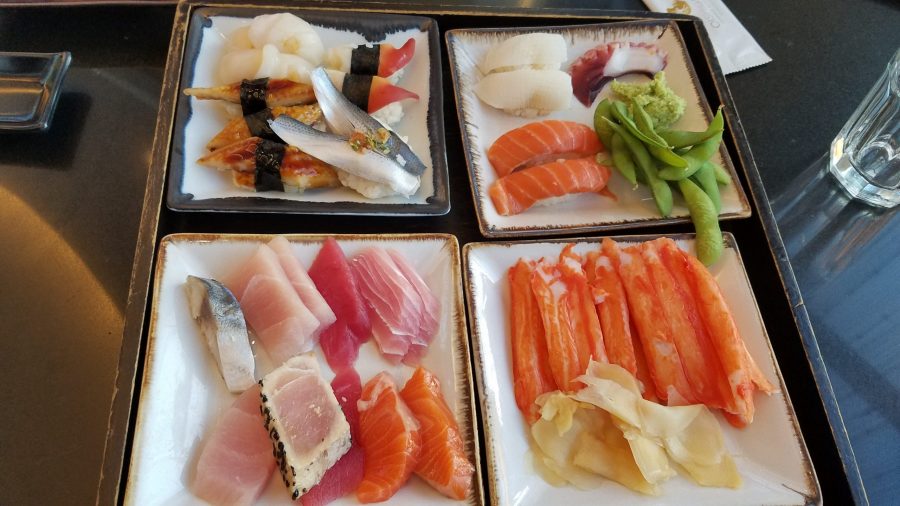 This was at an all-you-can-eat sushi place in Bangkok. Sure, it’s not as proper as a sushi-counter experience in Japan, but I’m pretty sure I left the place buzzing from all the omega-3s. Or maybe it was mercury poisoning. Either way, I ate an obscene amount of raw fish and am probably banned from the venue for life.

Nasi Padang at Warungs in Indonesia 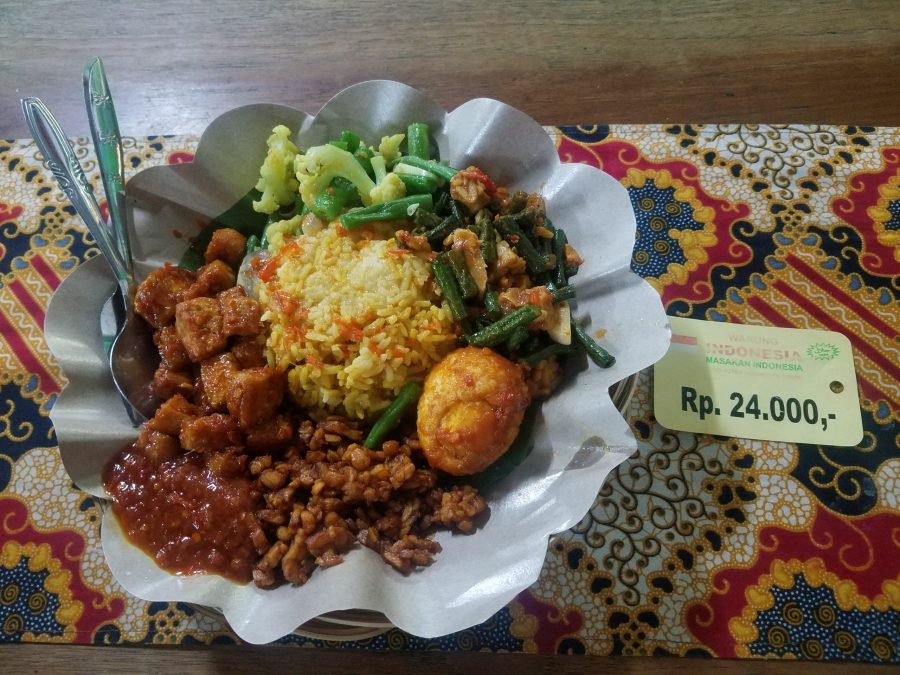 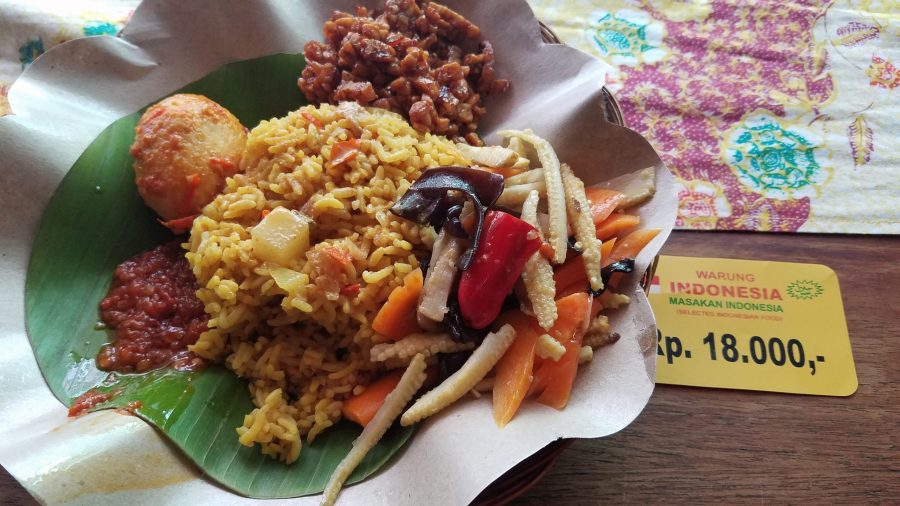 Nasi Padang is hands down my favorite way to enjoy Indonesian food. Warungs serving this style of inexpensive fare are found everywhere. The food is on display; you only pay for whatever you add to your rice. The meal at the top includes two kinds of vegetables, fried sambal tofu and tempeh, a sambal boiled egg, nasi kuning (yellow rice), and delicious homemade sambal for $1.60. These eateries were in tourist areas, so utensils were available. In some warungs, you eat only with your right hand then was it in a communal sink afterward. (Kuta, Bali) 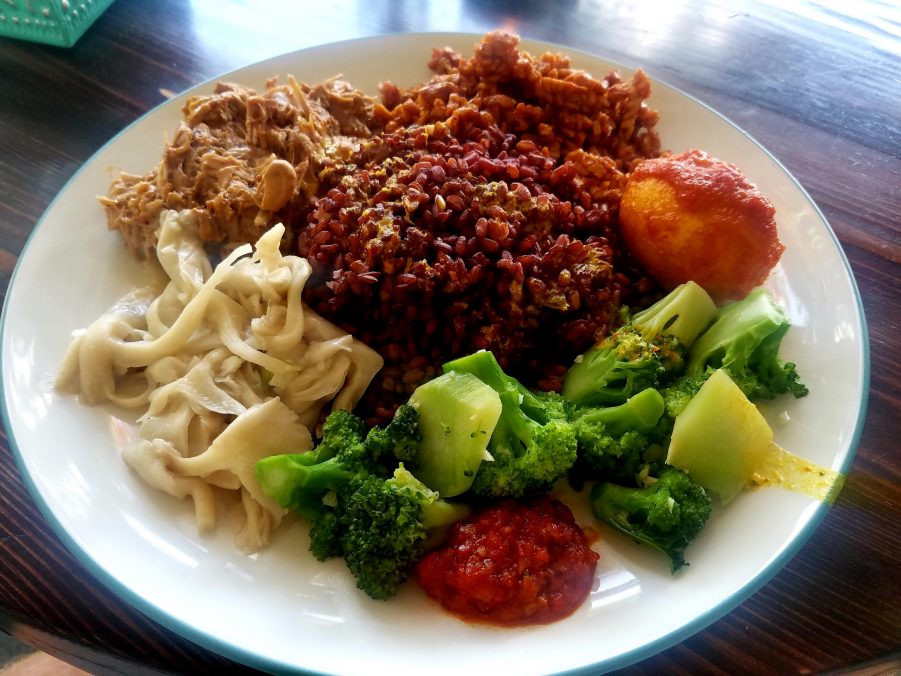 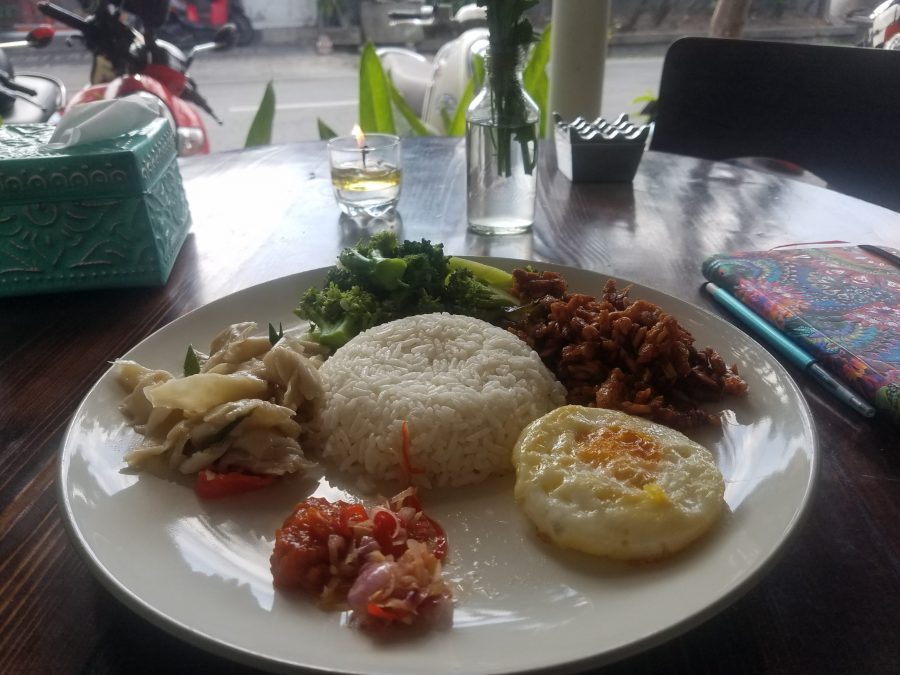 Not all warungs in Indonesia are “simple.” These newer, hip warungs are often just as good. I stayed just across the street from my favorite warung in Bali, Warung Local on Jalan Batu Bolong in Canggu. I ate healthy, delicious food there daily, never paid more than $4, and never got a bad stomach. The plate at the top contains (from top going clockwise) fried tempeh, sambal egg, steamed broccoli, spicy sambal merah, mushrooms, and jackfruit prepared like pulled pork. (Canggu, Bali) 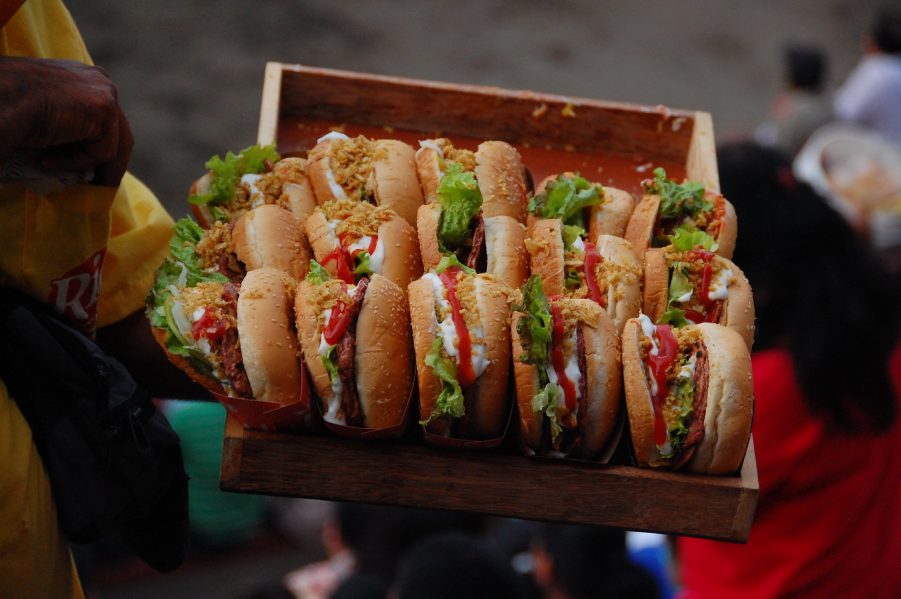 Colombian hamburgers (hamburguesas) are sold everywhere, but I ate my first while in the stands at my first bull fight. Not exactly healthy, but not bad for a $1 hamburger! Now I know what they do with the bulls after the match. I also didn’t realize that I would be running from them in Pamplona many years later. (Popayan, Colombia) 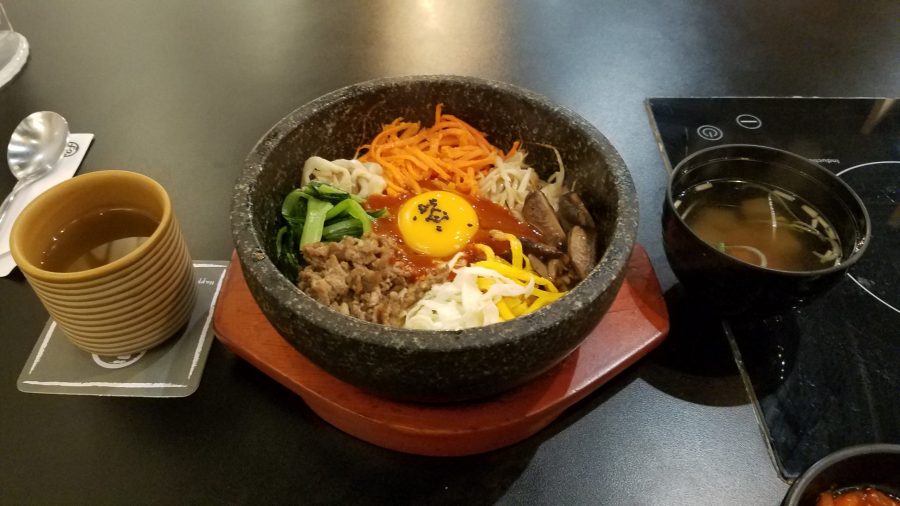 There’s just something beautiful and addictive about Korean bibimbap. The rice becomes toasted at the bottom of the dangerously hot bowl while you eat. The fermented gochujang paste is savory. The runny egg melts down. All the little side dishes with pickles, soup, kimchi, and other mysterious things are a nice bonus. (Kuala Lumpur, Malaysia) 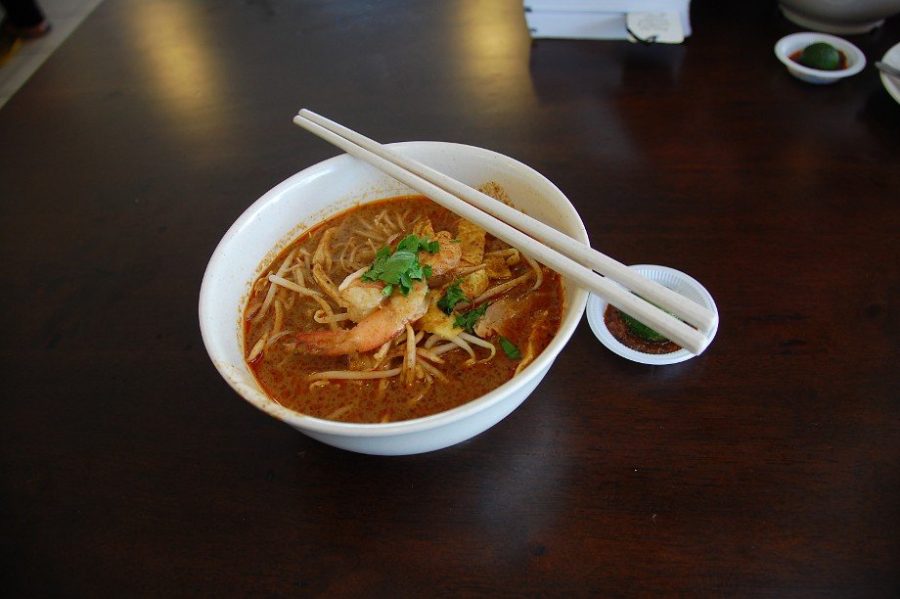 The coconut-based noodle soup known as laksa is famous in Southeast Asia. Many variants exist (e.g., Singapore, Kuching, etc), and each has a fierce following. People are willing to fight over whose style of laksa is better; don’t get them started. The Kuching variety is delicious, but it’s heavy! Technically, there’s more saturated fat in this variety of laksa than the average Big Mac, but coconut milk is a helluva lot better. (Kuching, Malaysian Borneo) 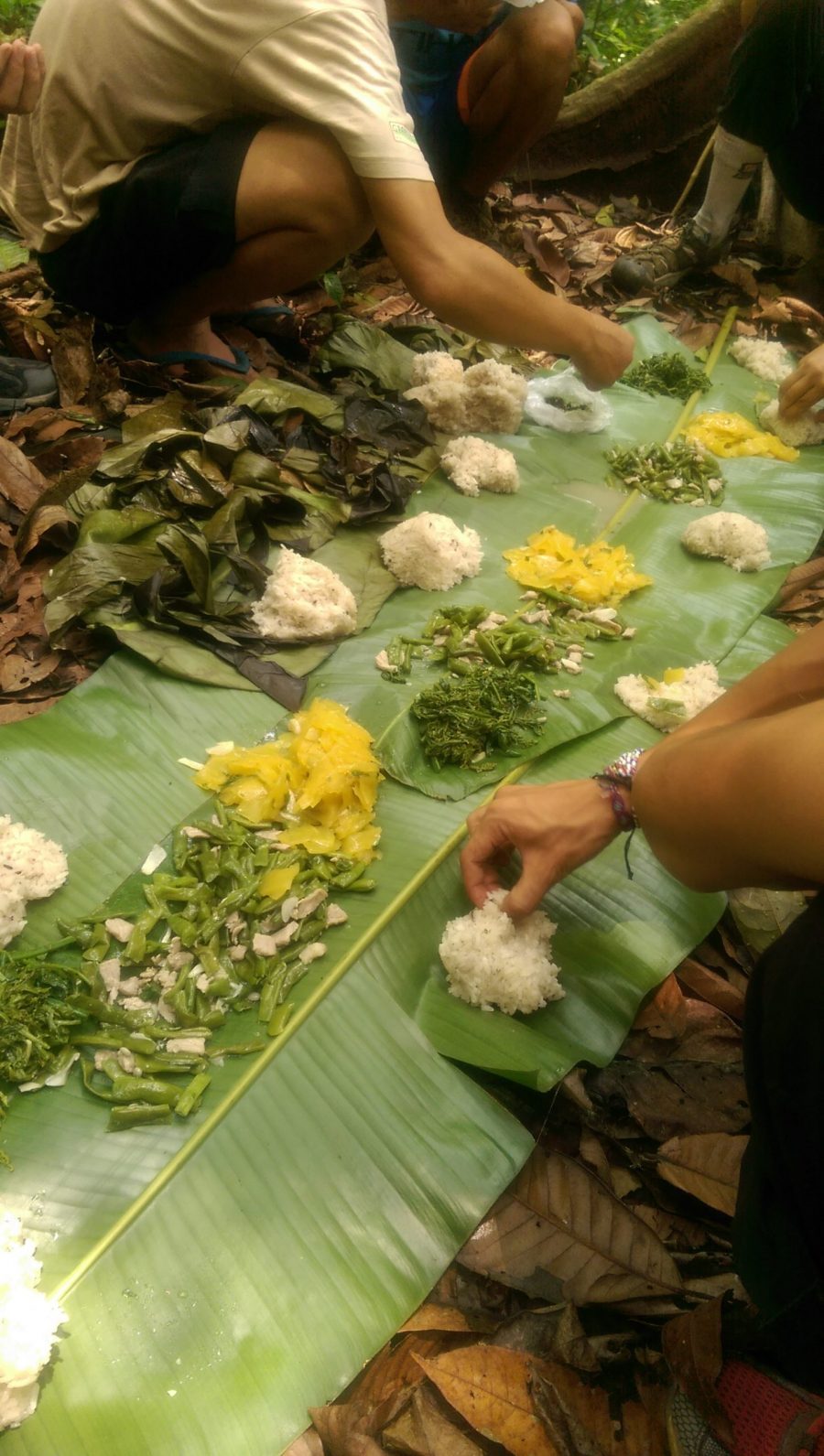 Sometimes, what makes a meal so memorable isn’t the food itself, it’s the circumstances. In this case, the meal I shared with some fellow jungle trekkers in the Luang Nam Tha Protected Area of Laos was one of my favorites. We ate with dirty hands from a banana leaf spread on the jungle floor as scores of leeches wriggled on the leaves around us. The food, cooked in the field, was tasty, but we had to eat quickly before the leeches and biting ants carried us away. (Luang Nam Tha, Laos) 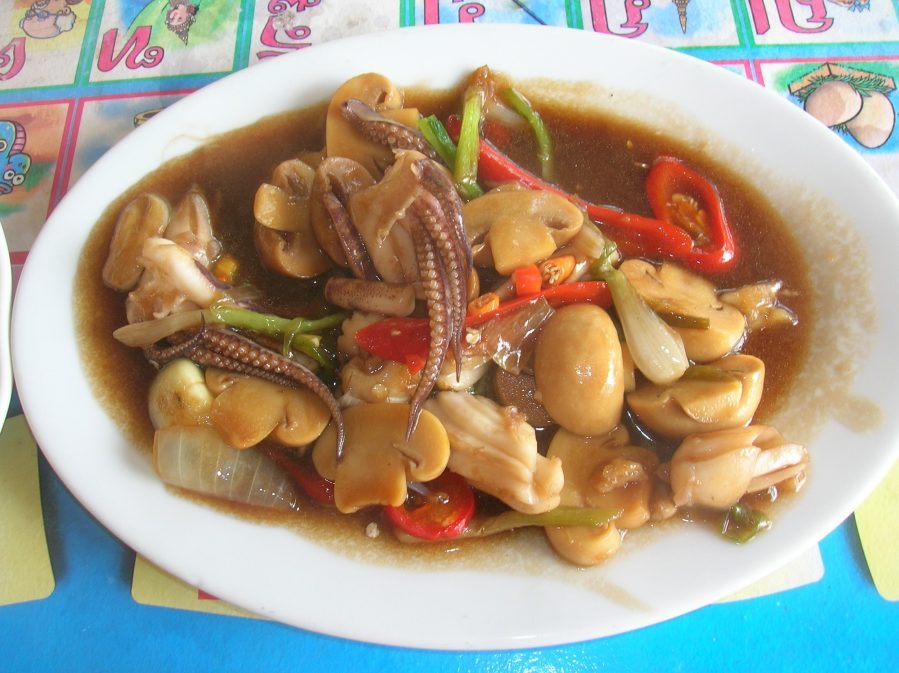 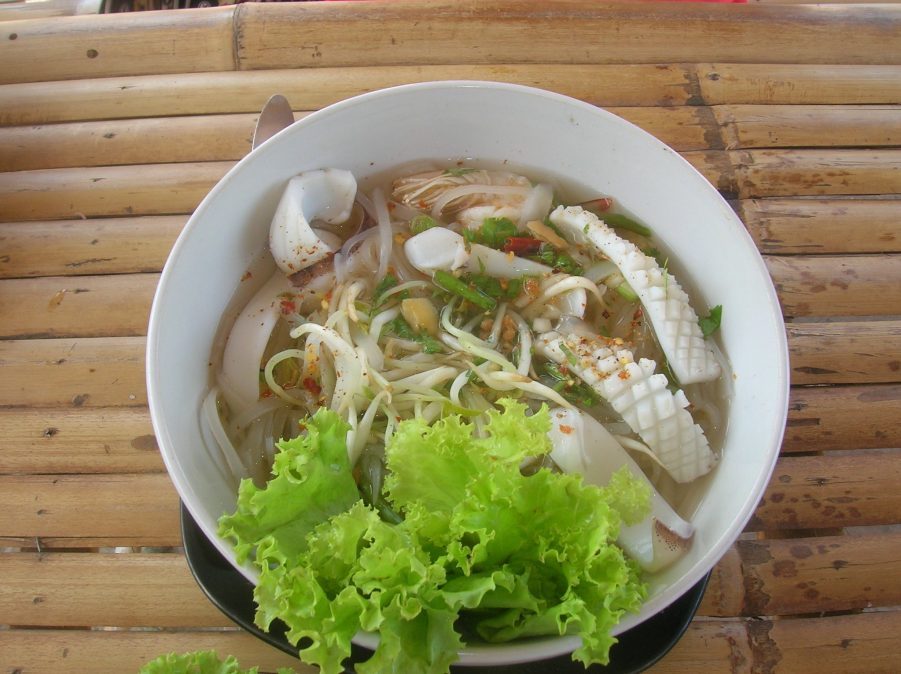 In my opinion, tentacles = happiness. This spicy stir-fried squid and mushrooms (top picture) in Thailand was some of the best I found. Koh Lanta, my favorite island retreat, is a great place to enjoy fresh squid. You can see the glow of squid fishing boats light up the horizon just about every night. The squid noodle soup (bottom picture) was so fresh that the tentacles melt in your mouth. This squid is nothing like the rubbery “calamari” we too often consume in the West. (Koh Lanta, Thailand) 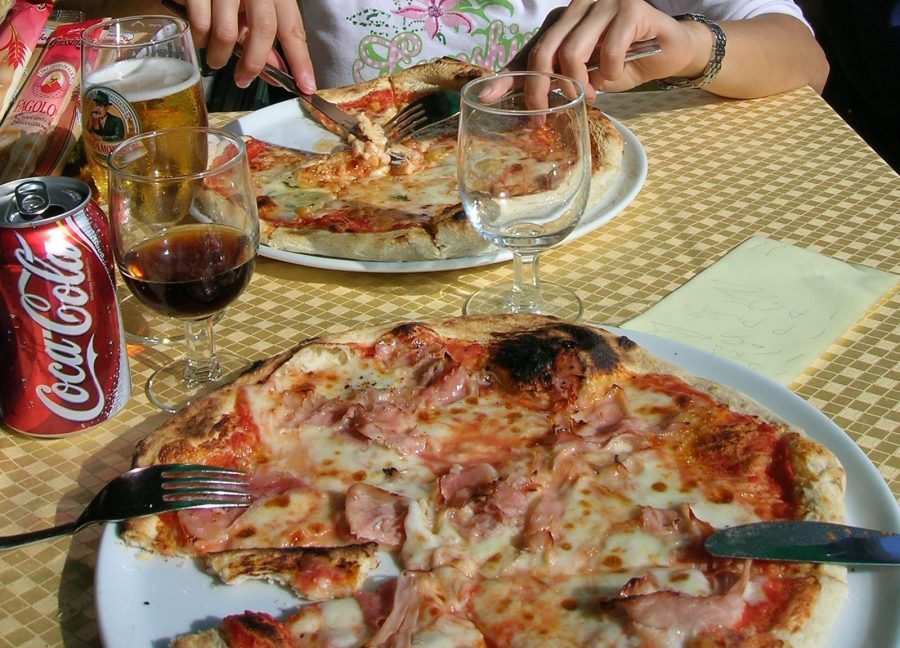 Real, wood-fired Italian pizza, even when burned crispy, is still better than those squishy grease-frisbies that Pizza Hut mass produces and tosses out. Unfortunately, they’re the most widely known American pizza chain abroad. Italian pizza, on the other hand, is performance art that begins by watching a man with a lot of arm hair toss and catch the dough. (Brescia, Italy) 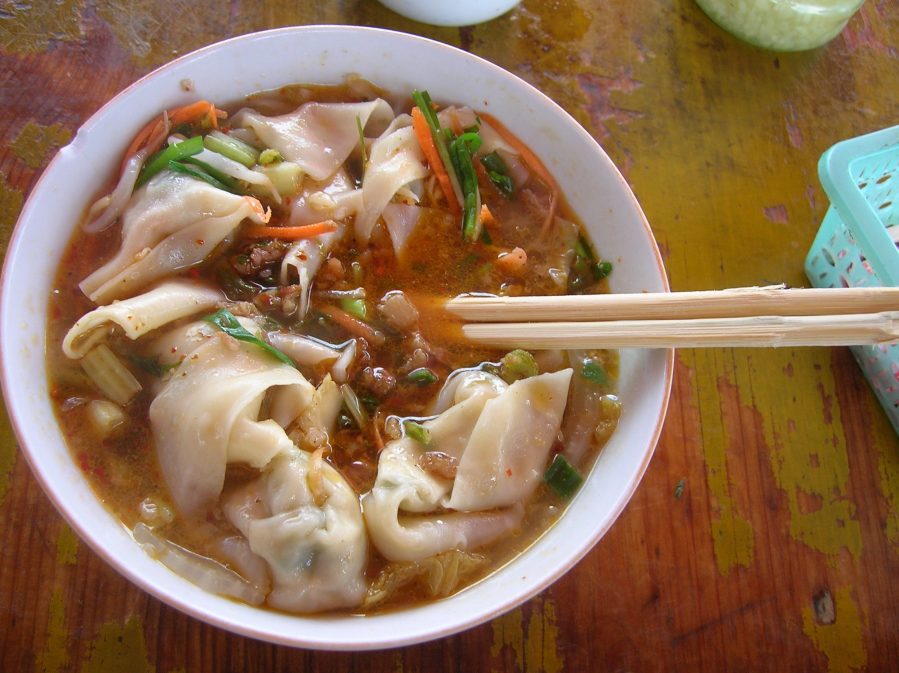 This wonton soup I ate in Yunnan, China, was nothing like what you see at the average Chinese buffet. The wonton noodles were handmade every day. The soup also contained black fungus, minced pork, bok choy, and shallots. I enjoyed this meal after a day of exploring Yunnan and cycling the countryside. This was a very memorable bowl of noodles — and I’ve had quite a few! I’ve even watched them being made by hand at a noodle factory in Hsipaw, Burma. (Yunnan, China) 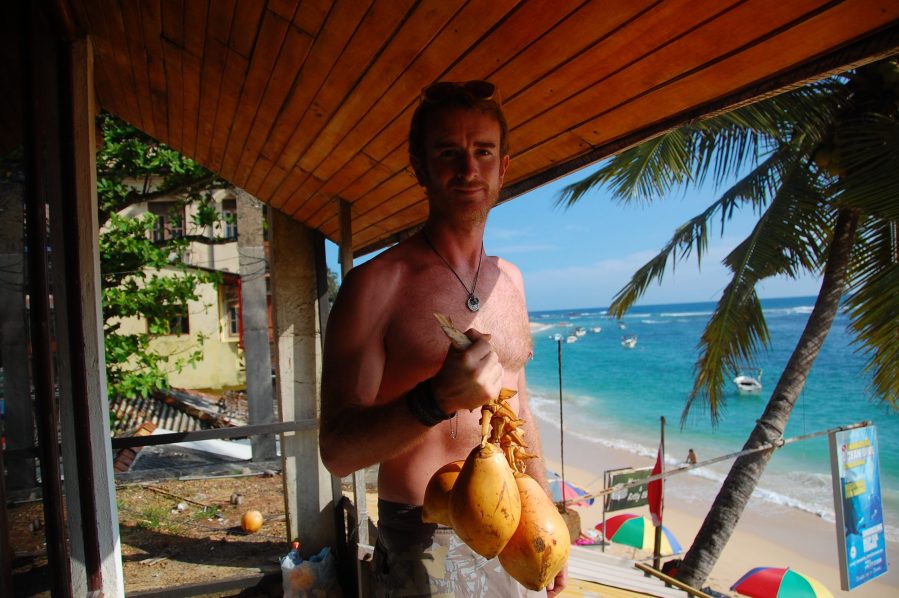 OK, technically not a meal, but I have to give mention to one of my favorite sources of sustenance. These yellow king coconuts are almost free in Sri Lanka, assuming you don’t buy them from a scammer on the beach. I regularly picked them up from the ground.

Unlike green coconuts, these are primarily for drinking and don’t have much flesh inside. I learned to open them with my knife and drank at least two every day. Sometimes I dumped them over my hair and skin in the shower. Coconut water is full of electrolytes and considered critical for survival in tropical places. Fun fact: King coconuts were once used for field-expedient IVs during World War II instead of saline solution.

Now, go forth, and enjoy some noodles!

Previous Post: Weird Travel Food: The Ugly Stuff
Next Up: Meeting People in Hostels: The 5 Types of Travelers