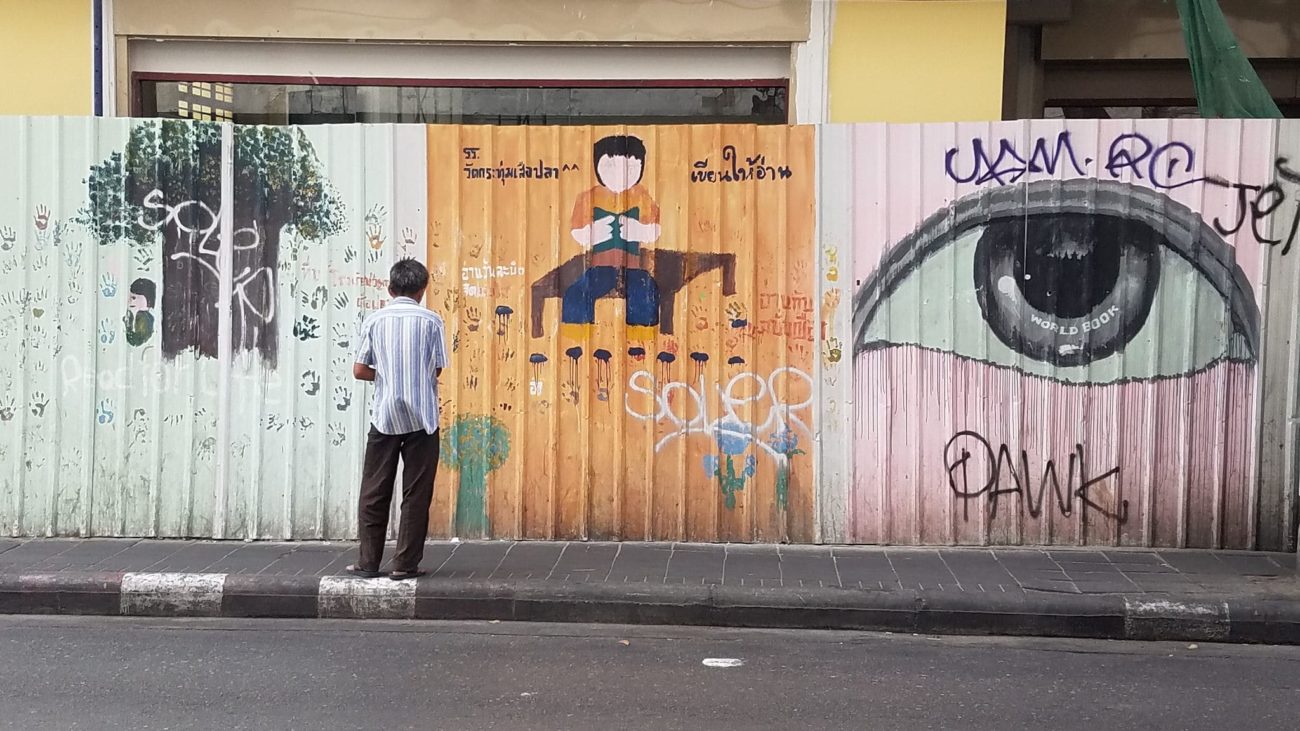 In this instance, the little things that crawl on you. It was the presence of a small ant harmless picking its way through my leg hair that lifted a solid, good-to-know fact out of the haze in my brain:

I am back in Bangkok.

Sure, ants do occasionally hitch unauthorized rides while I’m at home. But not in February, and not often in the big city. That ticklish twitch was enough to cut through the exhaustion of 26 hours of travel. It put a smile on my face after nearly 48 hours without sleep.

The last night at home was tough. There had been no rest the night before my 05:00 Uber to the airport.

Then, there was fear.

Fear, not because I would soon be alone, a world away from loved ones and Trader Joe’s. Fear because Delta refused me at check in.

This wasn’t the first time that Delta had skyrocketed my cortisol levels just two hours before a long-anticipated flight to Asia. Same as the first time, they weren’t happy with my lack of a Thai visa. Getting one isn’t easy in Kentucky. The nearest Thai consulate is in Chicago. And the last time I mailed my passport to the Thai consulate there, someone f*cking stole it. 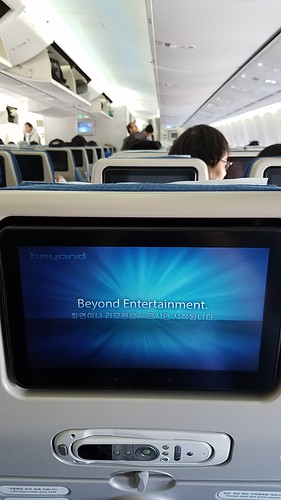 So now I take my chances with each airline. Spin the no-visa-no-worries wheel. They all have different policies. Interestingly, the Asia-based airlines could care less. Delta slapped my hand. Everything hurts a little more at 0-dark-30 in the morning.

I patiently explained that Americans receive a visa exemption to Thailand for 30 days. I had proof of funds. Immigration officials like funds. I could exit Thailand overland; easy to do. Airlines don’t like to consider buses and trains as valid modes of international travel. Inconceivable.

Vagabonding concepts often aren’t compatible with big bureaucratic systems. This subculture just doesn’t compute. There’s a reason I leave the country each year immediately after doing my taxes: the IRS has probably organized a manhunt.

The Delta software flagged me as an unwelcome anomaly. One with long hair and wearing flip-flops in February — double whammy.

Or maybe some nervous tick gives me away. I’m always twitchy at check-ins now. They make me feel vulnerable. Exposed to database glitches, company policies, and the whim of underpaid Reality TV watchers in clip-on ties. I once survived the deadliest typhoon in history but barely survived an airline’s idiocy immediately afterward while trying to get home in 2013.

By complete miracle, enough phone calls were made to connect someone in possession of both rank and sound mind — a rarity in big corporations. Even tougher in the dim, pre-coffee hours of the morning. She passed the word that I would be allowed to board the plane this time.

Sure, I brought this extra stress on myself. But driving to Chicago to get a Thai visa was out of the question. An unfortunate inconvenience. Lexington has great Thai food for a city its size, why not establish a Thai embassy nearby?

Brother and sister were later removed from office in a rather not-so-optional way. My state is famous for bourbon and racehorses, not producing Asian prime ministers. It isn’t really even known for exemplary education. Just look at the twisted perversions I call sentences.

After Atlanta, life got way better. My 787 Dreamliner flights were works of art. Everything was orchestrated beautifully. I enjoyed the perfect long-haul flight to Seoul, down to me getting a row all to myself for 16 hours. At one point in the flight, I even caught a glimpse of Siberia as we flew over.

Although EVA Air won me over last year with food, movies, and Hello Kitty, Korean Air is still near the top of the list. If you’re savvy enough to avoid the Western chicken-or-beef regurgitations served in foil, the Korean food options are outstanding. 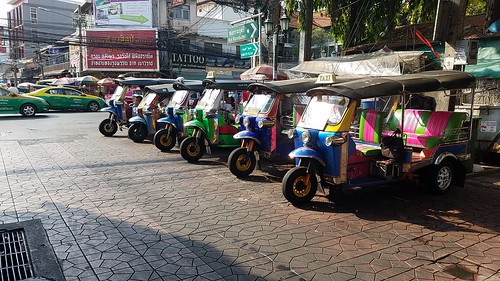 Oil was already boiling in front of an apron-clad woman. Her utensils produced metallic scraping sounds on a wok. A mangy dog was chewing on a menstrual pad it had pulled from the trash.

I am back in familiar territory. Things are just the right amount of crazy here.

The last weeks have been a busy blur. What’s left of the L4-L5 disc in my back is broken again. That weak link in a body I need for a few more years is a good reminder that being able to walk truly is a luxury. I’m very grateful to be able to keep wandering this earth. I prefer to do so on my feet, but I’ll crawl if I have to.

I don’t own much. But what I do own (a library) is heavy. With great knowledge comes great sorrow — moving it. Don’t ever offer to help me move. Even if I tempt with things like, “There isn’t any furniture (true statement) only a few boxes (also a true statement).” Run.

Thailand welcomed me back with the heat, stray dogs, smart cats, pollution, obscene traffic, and madness that I love. Although I’ve made this same entry pretty much yearly since 2006, I’ve learned a few new moves since then. Bangkok loves to twirl.

I even got in one last visit to Cheap Charlie’s before they close permanently due to good ol’ fashioned push-the-little-guys-out-to-build-a-skyscraper greed.

But cities are cities. Bangkok is fun for a while — but then it’s time to get out before sanity unravels into a knotted mess.

And as heat builds in Thailand during the hottest season (now), concrete begins to suck even more. Normally I would flee to Chiang Mai, Pai, and the north. But the air quality there is rotten with agricultural fires burning, despite the government’s annual promises to curb the practice.

So I’ve decided to add a new island to my repertoire instead. 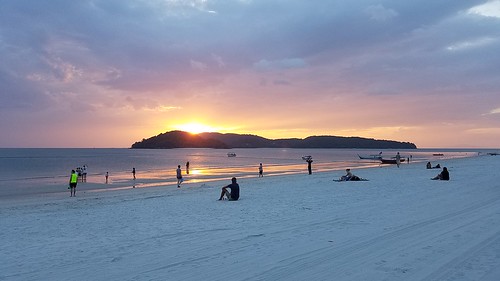 Rather than grab a motorbike and spin toward Pai, this year I ran to Malaysia — Langkawi of all places. I didn’t see that coming.

I dislike seeing a blob of island on a map that I have not yet visited. Especially when it’s in the Andaman Sea. The reaction is much the same as shining a laser pointer in front of a cat — a cruel and unusual temptation.

Even though I’ve sunburned on many islands in this region, I avoided Langkawi for 11 years. My Malay friends come here to shop and party. The island is duty free, so drinks and kitchenware are cheap. In fact, I’d say you can get the cheapest drinks in Malaysia here. I wouldn’t know about the Pyrex or Tupperware.

But this definitely isn’t like Malaysia’s Perhentian Islands. Or Kapas — an island I’m never supposed to write about. Both were heavenly last year. Shhhh…

Maybe I avoided Langkawi because it’s big. Nearly 95,000 people live here. And it’s plagued with logos I don’t want to see on an island. Starbucks. McDonald’s. KFC. And there are jellyfish; some will even kill you. Weighing the options, I’d still prefer to juggle jellies than suffer a slow-and-painful mutation at the hands of the Golden Arches. Chemistry sets have less ingredients.

I prefer islands without airports, but there is one here. Cruise ships stop here sometimes — another ill trait. You don’t have to hike up the big mountain in the interior…wait for it…there is a cable car.

Overall, I think I equated Langkawi as Malaysia’s version of Thailand’s Phuket, but that isn’t really fair. Sure, there are a lot of pasty people plying the beach in socks and Birkenstocks, but I’ve made plenty of bad choices, too. 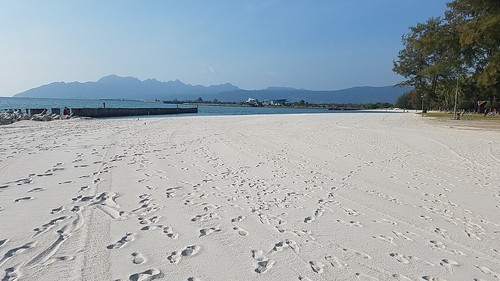 So far, there are many things to like about my first island of 2017.

The Muslim people here have been very nice to me, especially considering the rampant amount of tourism. Ironically enough, islands this busy back in Land of the Smiles are rarely as friendly. Asking for a napkin in a restaurant could get you stabbed on Koh Phangan.

I have not yet been asked a single question about American politics. This is a very, very good thing.

My Bahasa Melayu practice is going well here. I need it. Unlike in Kuala Lumpur where my victims immediately switch to English, the locals here patiently suffer through my brutalization of their fun language.

Langkawi is the largest of 104 islands in this archipelago. Only four are officially inhabited, but I’m hoping there are some hidden hippie colonies along the lines of The Beach (the book was brilliant; the movie, not so much). The other islands are pretty much just there to breed mosquitoes, which then fly here to feed on Russians in Speedos.

The main drag is easily escapable. Greenery and mangroves abound. Chickens run amok. Frogs sing loudly in the evenings. Roads in the interior are shady and just beg for scooter wheels. 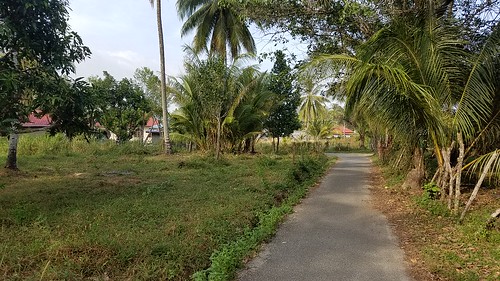 A good Indian meal in a nasi kandar place is $2 or less. The armada of green-lit squid boats off the coast every night is a beautiful sight: I enjoyed the freshest calamari dinner of my life for $3.

Sadly, real coffee is hard to find, and veggies are even more illusive. As Jim Morrison once sang, “I eat more chicken any man ever seen…” But there is a consolation prize.

The main beach here faces west. The nightly show is spot on. 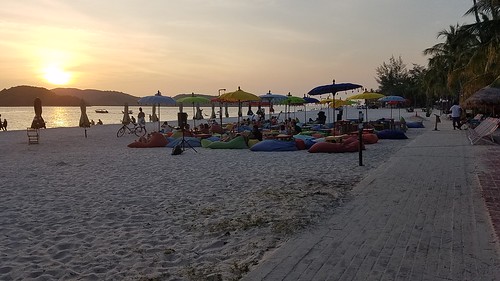 When I was very young, on one of the many family trips to Florida, my dad randomly gave some sage advice that stuck with me. I still remember that moment in the car. It’s especially relevant after gobbling vitamin D tablets in the U.S. all winter.

“Son, live in a place with palm trees one day.”

I’m looking at one right now.

Previous Post: Vagabonding 2016 Changed Everything
Next Up: Climbing Gunung Marapi in West Sumatra