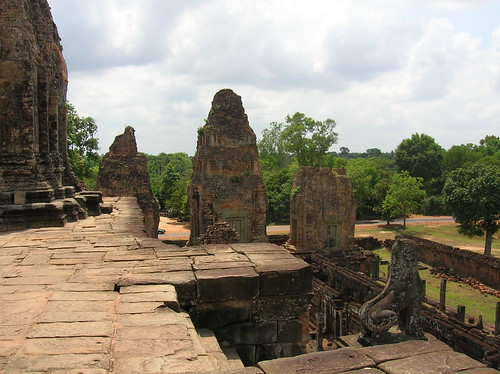 The Cambodian sun in April (the hottest month) is a force to be feared!

I spent the last of my three-day pass to Anglor Wat exploring around the temples again, this time at the temple where the movie Tomb Raider was filmed. It was amazing to see the huge tree roots that had just engulfed these temples and tore them apart over centuries. Some of the trees were easily 10-feet wide in diameter and they cast shade over the temple site. Moss and vines  creep up the stone walls. It’s no wonder they chose such an intriguing site to film the movie.

At one of the temples, I was surrounded by the usual mob of little kids selling postcards and bracelets. I had already purchased postcards from one of them. One of the boys could not have been more than seven years old and counted the 10 postcards for me in English, then French, then Spanish, then German. I was thinking…wow! I started counting in Mandarin Chinese to see if he knew and he finished my numbers up to 10! I would be willing to bet that he knew Japanese as well. How many adults do you know that can count to 10 in seven languages? Unfortunately, that’s probably all the education he is going to receive because his parents have him out of school to work the tourists.

A Cambodian police officer approached me on top of the temple, which was strange, the temple was small and really did not merit having security full time.

It took a minute for my rusty brain to comprehend that a uniformed police officer was asking me, like everyone else, to buy something.

I answered “no thank you.”

“No…you should buy a souvenir.” His face was serious.

He had something shiny in his hand. I’m thinking: what the hell is this guy trying to sell me? He gets close enough and I can see that he’s holding his badge! It took a full five or six seconds for me to realize that he is encouraging me to buy a souvenir, I guess from the kids…who knows.

My friend Kara was watching the whole event take place and wondering what the hell I was up to. I politely but firmly told the guy that I had already bought something and that I had spent a lot of money in Cambodia….which was the truth. After a lot of smiling at each other and me keeping my cool and confidence, he walked away and left us alone. My heart was racing because earlier in my travels I met a 19-year-old German girl who was robbed by a police officer here. Fortunately, this happened in broad daylight, and I got off easy.

My American friend Kara and I celebrated the end of our adventures by exploring Angkor What, the famous after-hours pub here until 3 a.m. It was probably the most dangerous temple that we have explored as of yet, at least feels like it! She is off today to Bangkok to meet her boyriend, so once again, I am on my own and a vagabond. I will never get over my addiction to the feeling of not knowing what the immediate future holds….

Previous Post: Angkor Wat
Next Up: Always an Adventure