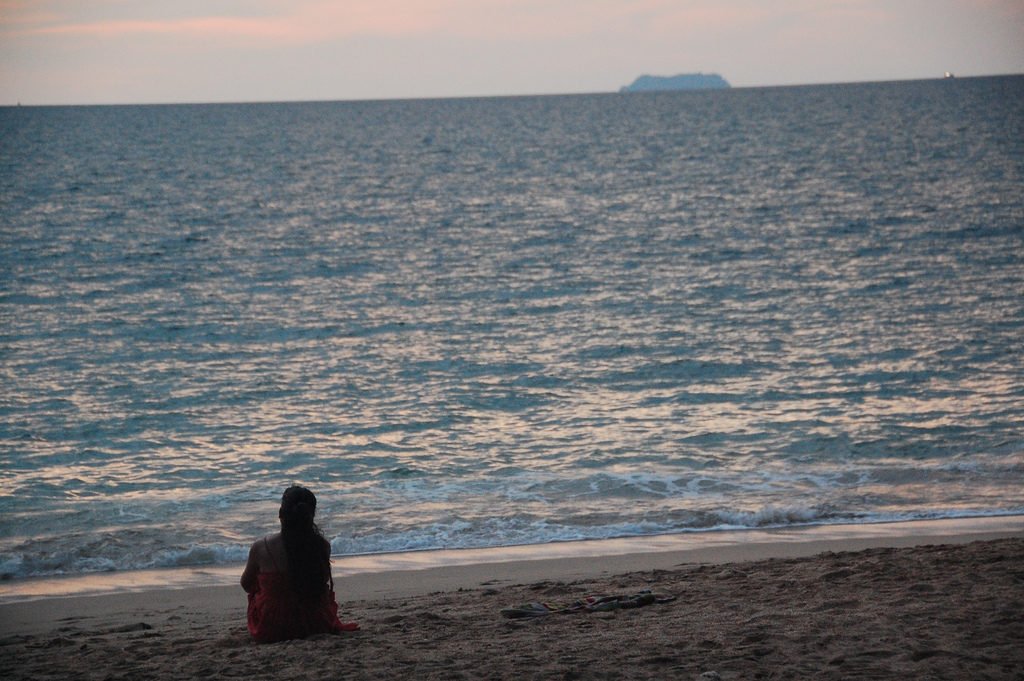 A jolt of unexpected excitement vibrates through my body. I struggle to keep it my secret.

I am sitting cross-legged on a sandy bamboo mat, watching another masterpiece of a Thailand sunset dismiss an island day. The owner of the restaurant is making his rounds lighting torches which pop and crackle around us with puffs of gray smoke. I steal a glance at my mysterious new friend.

I have only known my new companion for a few hours. She is friendly, Dutch, and quite beautiful. She has also just taken my hand for the first time.

Fate, luck, Celestine Prophecy…whatever label you give it, something brought us together randomly. Since we are both vagabonding, we know that this luxurious feeling won’t last forever. Our encounter was doomed before it started, and with each day that we spend together we know that one morning will be the last. The Devil will be waiting for two promised souls when the fun is over.

Knowing that we will owe a debt in tears in a few shorts days only makes the encounter that much stronger and more magical. In travel, you build relationships at light speed compared to the methodical navigating of social protocols at home. When you are backpacking, there simply isn’t time for any of the usual games. From the onset, there is a silent-and-mutual agreement that the road always takes precedence over emotion.

One day you both know that you will be divorced in exchange for a cardinal direction. You ponder momentarily, then you both fork over your hearts.

This has happened to me more than once, and some of the encounters have defined my entire trip to a country — even changed me as I stepped off the plane back in America months later.

Good or bad, I believe that none of these life-changing connections with people would have been possible had I been traveling with someone from home. I probably would have just eaten dinner with my travelmate and made no effort at starting a conversation with the solo traveler.

It may feel safer to partner up with someone from home, and I’ll admit that there were times I would have sawed off fingers for a familiar face, but you may be cheating yourself. I watched many people traveling in pairs or groups simply stick to themselves in a little bastion of cliquey comfort and safety, barely noticing the new culture or people around them. Many times they didn’t even look happy.

As a loner, I feel that I received an entirely different trip experience in the same place. I also feel that my trip had more resounding spiritual benefits rather than just “entertainment” value. I had time to get to know myself.

Whatever your travel style is, shake up your comfort settings at some point and give solo travel a try. At least for a while.

In many countries on the backpacking circuit (especially if you look different than the locals), you may have to try to be alone! So many times I only wanted some time to myself for reflection and updating my journal when a stranger sat down and started asking the usual questions: “Where are you from?”, “Where have you been?”, “How long are you traveling?”

It does not matter how introverted you are. It is nearly impossible not to meet new people when you are traveling alone. Plus, as a bonus, there is no debate on where to go next, where to eat, where to stay — for one of the first times in your life you are truly free.

As expected, I told my new friend goodbye and watched as she walked across the plank to a rumbling diesel ferry. All I was left with was an email and a lifetime memory, but when I felt the weight of my rucksack biting into my shoulders, I knew that it was time to move on. With every adventure that ends, a new one is not far away.

The sadness of the goodbye melted and suddenly I was smiling. No doubt she was sitting on her boat doing the same.