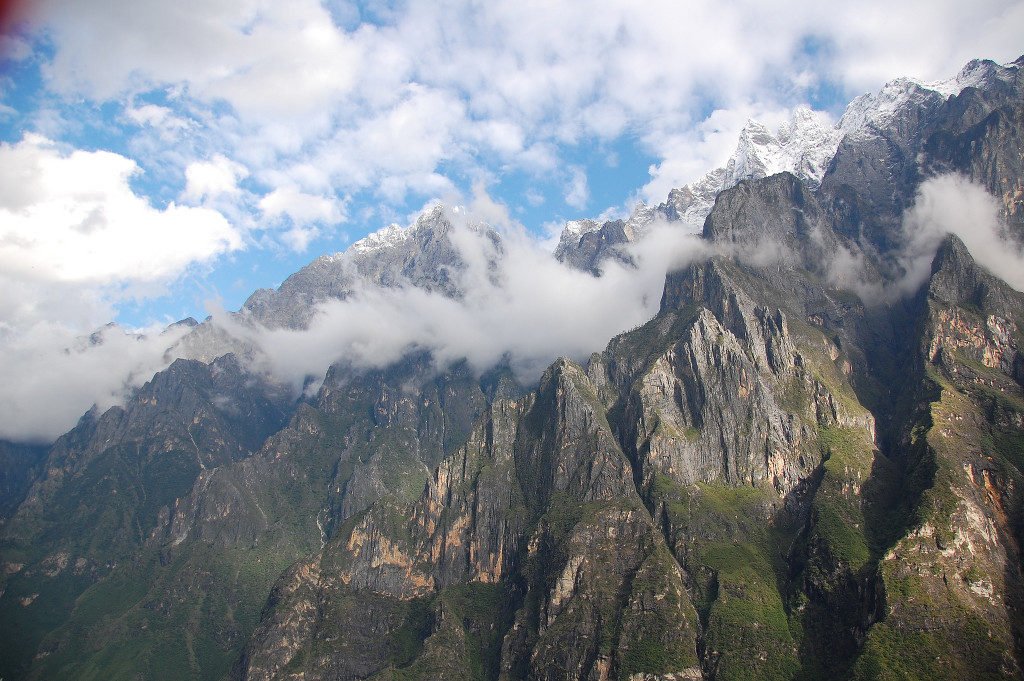 First, if you haven’t, read about Day 1 and Day 2 of my independent trekking in China’s Tiger Leaping Gorge.

The sun provided another perfect day for the last segment of our three-day trek through the Tiger Leaping Gorge outside of Lijang, China.

We left the Halfway House GH, which I was not too sad about. Unlike the Naxi Family GH in Lijiang, I have never encountered a more rude place to stay in Asia. They did have the most spectacular views, and a steady influx of travelers (maybe that was the problem), but the girls working there would roll their eyes and curse us in Chinese when we tried to order the overpriced food and drinks — crazy!

I soon forgot about the negativity though as we crossed waterfalls and made our way down some steep paths and out of the gorge. At the house, we picked up Fi and Steph from England, two girls I had met in Lijiang before, and happened to be doing the trek independently as well.

The scenery was even more beautiful than the last couple of days. It was a feast for the eyes and you would have to be a corpse not to feel the power rising up from the ancient mountains around us. 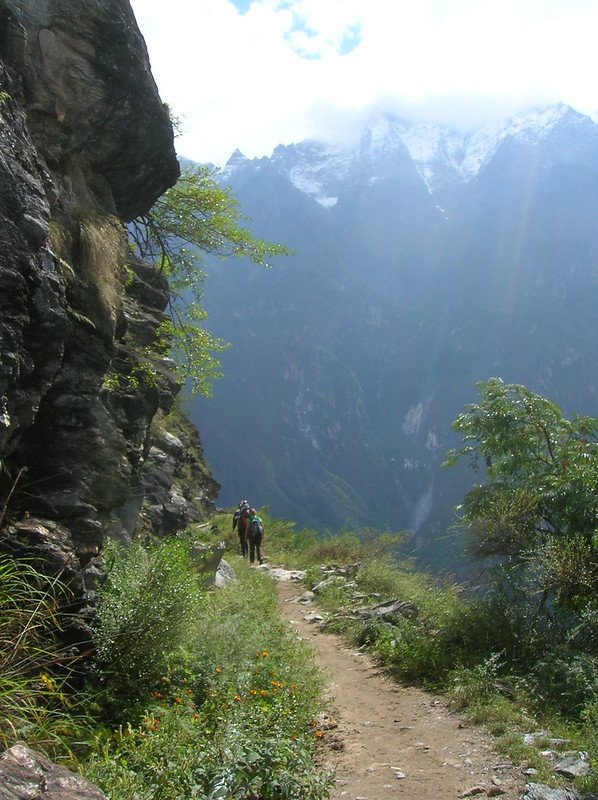 With all the downhill and rough terrain, my left knee was a throbbing mess. A painful reminder of my Shaolin kung fu training over a month ago in Henan. Where was Laura and her acupuncture needles when I needed her? Instead, Genevieve from Montreal provided some homeopathic medicine, which did help some. It was my first experience of taking white powder from a small crack-dealer-sized bottle…but she opened my eyes to a whole world of natural medicine which I hope to explore when I get home. How she travels with a bag of small mystery vials without getting busted, I will never know.

We made it to the road, where we found Tina’s Guesthouse and ate a wonderful meal, then hitched a long and twisting ride in a minibus back to the road junction to Shangri-la. It was the literal fork in the road, and we watched as Dave and Vicky walked away under the weight of their packs, on their way to Shangri-la (ZhongDian), farther into the mountains.

I actually managed to speak enough Chinese to our driver to get him to call a friend who would take us all the way back two more hours to Lijiang. Luckily, it worked, and we didn’t end up in the middle of nowhere with a group of people ready to hang me for my piss-poor Mandarin pronunciation. I felt like the rock star for pulling it off.

We dragged ourselves back to Mama Naxi’s GH covered in mud, sweating, and grinning nonstop. Earlier, I had seen veterans from the Tiger Leaping Gorge return at dinner time with stories as the rest of us all sat there waiting for our chance to experience the adventure. Now it was our turn. No doubt, people noticed that we were glowing with positive chi. We had just barely missed dinner, and I was met at the door with an angry Mama Naxi saying “you too late…no dinner!”

I said, “But Mama, we just came from the gorge.”

She looked me up and down to confirm — and could probably smell me too — then smiled and started clapping her hands and shouting orders to the staff of young girls in Chinese. They went buzzing into action and before we knew it, they were cooking an entire seven-course dinner just for the three of us. What a place!

I ate spicy chicken, ground beef, pork, mushrooms, veggies, tofu, and rice until I had to slump back into my seat to contain it all. The perfect end to one perfect trekking adventure. The Tiger Leaping Gorge is a memory that I will have forever.