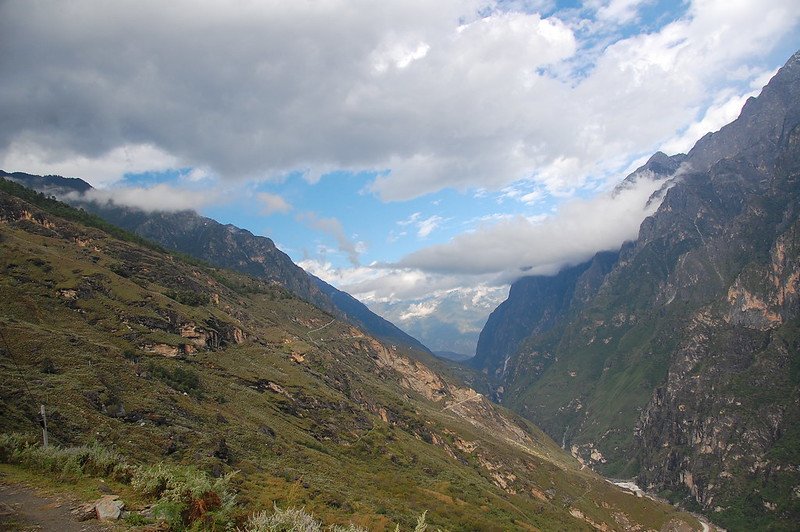 We left the Naxi Family Guesthouse and hit the trail for what turned out to be the best trekking day of my life.

We didn’t exactly get an early start, but it did not matter, and the owner of the guesthouse walked us down the trail with smiles, hugs, and wishing us a safe journey. That is the way adventure travel is supposed to be, and it makes me happy to know that capitalism may have its icy fingers in the Tiger Leaping Gorge already, but not everyone has sold out completely.

Unlike yesterday, we could tell that the weather was going to be spectacular. A ghastly mist was rising up from the Yangtze River 300 meters below us, and we were literally in the clouds that were clinging to the mountain. Soon enough, as the hours passed, the clouds lifted to reveal a sky that looked a lot like it does in Alaska: a pure-blue color that is unspoiled by pollution or humidity.

The mountains to our right, across the valley, were the most powerful and respect-demanding that I have ever been close to. They ripped up out of the earth with anger and sharp angles, then turned into a vivid green, and finished with points that were covered with the cleanest white snow. The blanched peaks contrasted perfectly with the blue sky and burned a mental picture into my head that will last forever — but I took 200+ photos anyway, just in case. 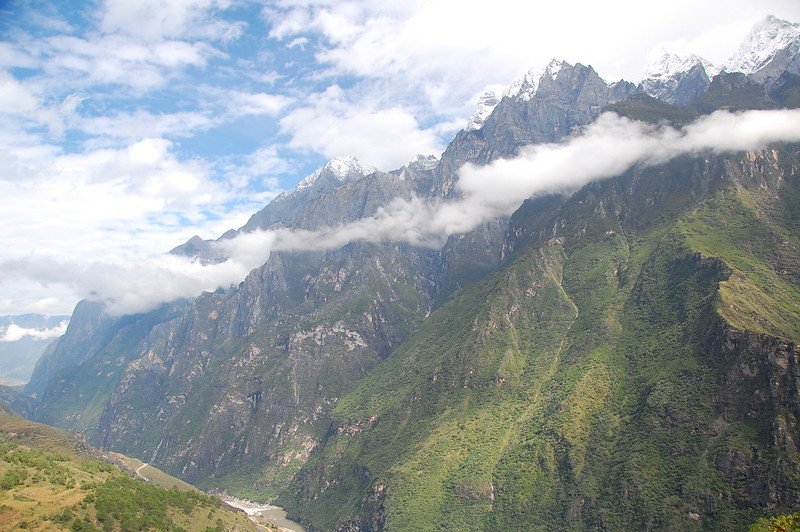 Along the hike, we passed herds of friendly goats that came down out of the rocks to check us out and nibble at our clothes when we weren’t on guard. They were tended to by Naxi shepherds, which didn’t exactly fit the stereotype of a mountain shepherd. One was dressed in his best suit and jacket, working in the mud, and another was sitting on the edge of the world talking on his mobile phone! 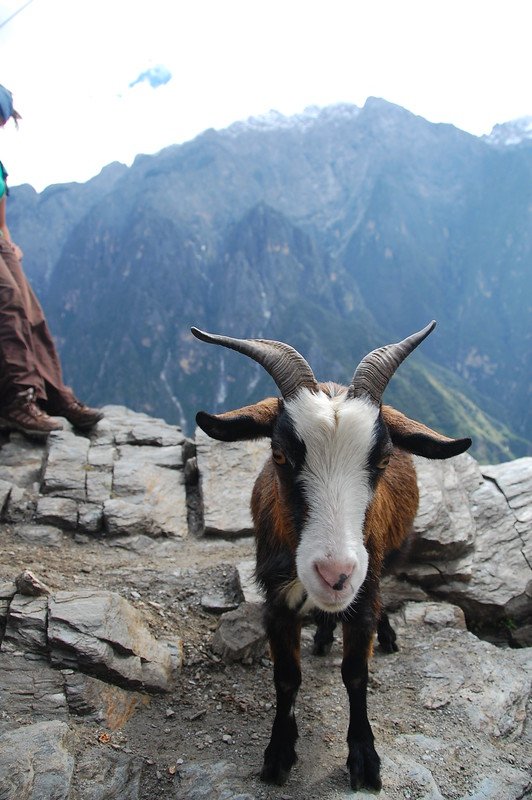 Sage and loads of herbs grow on both sides of the trail, and give the air a sweet fragrant smell, which reminded me a little of Dr. Ho’s shop in Bai-Sha. Sage wasn’t the only thing growing wild there either….we saw a two-meter-tall Cannabis tree!

I could literally see the mountain peaks generating weather, much like Denali in Alaska does. The wind would blow against the back of the massif, sending a cloud of snow and moisture into the air. Waterfalls cut their ways down the rocks to form the Yangtze River below. At some point it hit me that, with as many people and animals that depend upon the Yangtze River for life, I was witnessing the start of something. I was watching the birth of life here in this remote gorge. 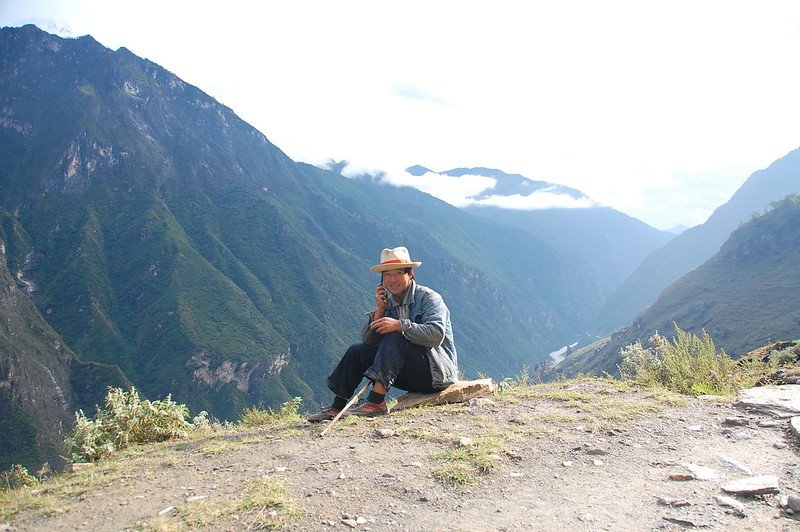 And now time for the bad news:

My happy thoughts were occasionally interrupted by the sounds of explosions in the distance. The Chinese were blasting, bringing rocks down to begin construction of a hydroelectric dam to go into service in 2008. The plan is to dam up the entire gorge, raising the water level, and brutally changing the entire path of nature here. Thousands of people are being relocated, but their ancestors’ graves and their birth homes will be under hundreds of meters of water within two years. Not to mention the thousands of animals which call the Tiger Leaping Gorge home.

Why? The factories in the south need more power. Those T-shirts, shoes, and other exports — most of which end up in America and Europe — must be produced at whatever cost. It looks like no lessons were learned from the Three Gorges project farther north a few years ago, and so history repeats itself. Unfortunately, nature and the Naxi people pay the price this time.

I was proud to be among some of the last people to get to walk the Tiger Leaping Gorge, and plan to write extensively about it — like everything else — when I can get to a place to do so. No doubt, what I have just said may get my blog banned in China, just as my Startbackpacking.com site was blocked by the People’s National Firewall.

Update: It was blocked! Haha

If this post gets me into trouble, then I’ll write again from Bangkok in a few weeks! 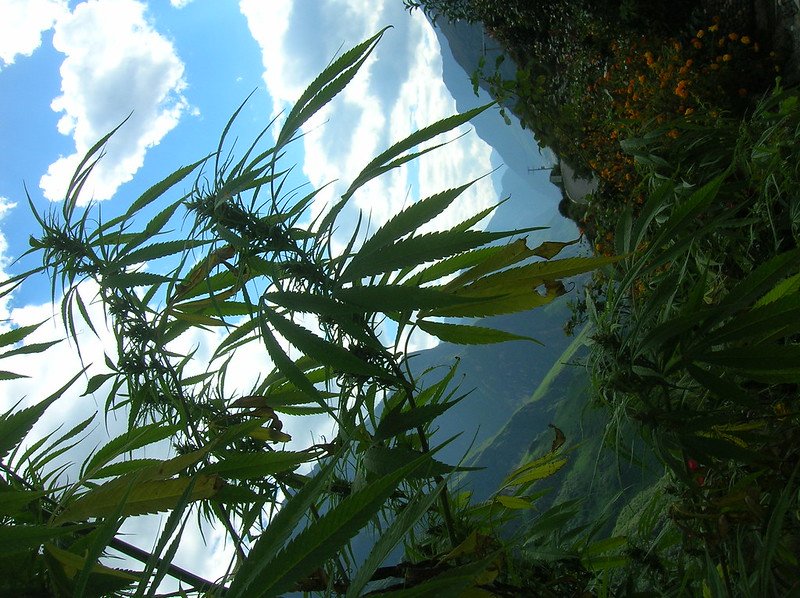