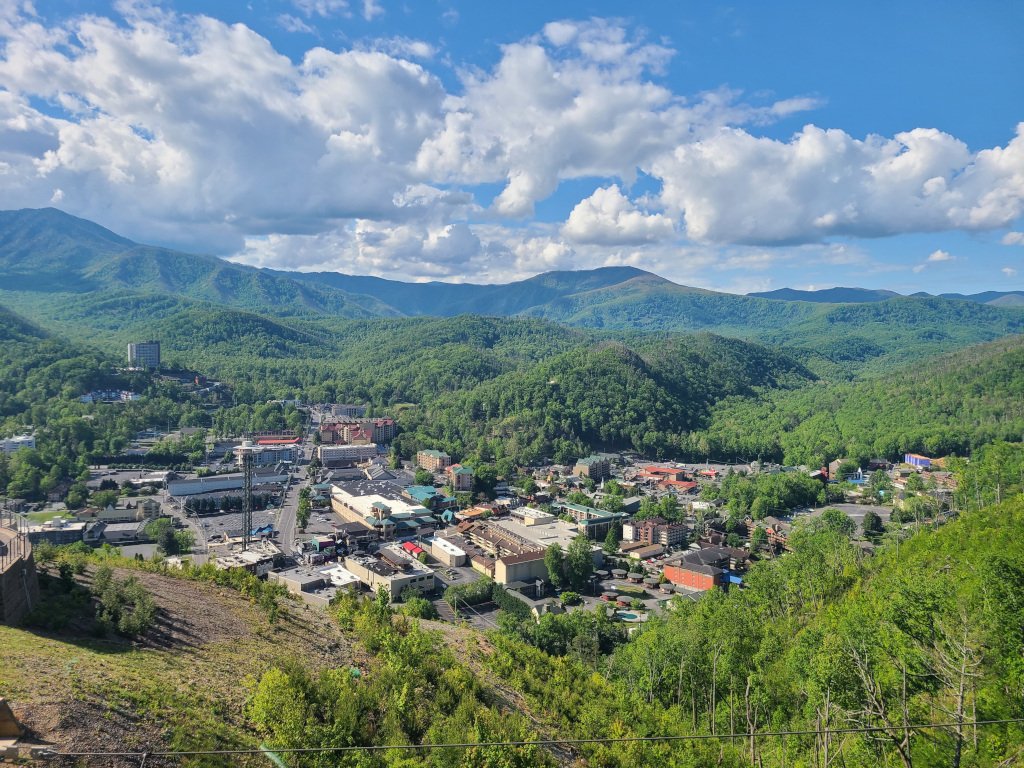 No, it wasn’t a large dog—that was a small black bear on the prowl!

I saw the bear, my first in the lower 48, shortly after having crossed the longest tree-based canopy walk in North America (880 feet)1. The day before, I had been surrounded by sharks. Admittedly, the sharks were happily swimming around a world-class aquarium, but I was still pleased to see my blacktipped friends again. They were good to me in 2006.

Sharks and canopy walks might conjure memories of Borneo, but I had these adventures while on a press trip in Gatlinburg, Tennessee. Really. If you aren’t familiar, the little tourist town serves as jump-off point for the Great Smoky Mountains National Park, the most visited national park in the United States2.

I’ve spent a lot of time in Gatlinburg and the Smoky Mountains. The vertical rock atop the Chimney Tops was where I first learned to scramble and climb as a teenager. Later, in my 20s, I used to hit the national park for trout fishing in spring then return to Gatlinburg in winter for the Christmas lights and shopping. I also brought a wide-eyed, fresh-off-the-plane Dutch woman there once while chasing the American Dream across the South.

We mostly behaved ourselves, but I never expected to receive an official invite back.

Despite having crawled Gatlinburg’s streets since the 1980s, I honestly had a lot trepidation before this trip. I nearly backed out.

Like many introverts, I’ve lost much of my social momentum over the past year. My last handshake with a stranger was in March 2020. The thought of being stuck in a mob of media folk was daunting. Even before the pandemic, if forced to choose between spending a day with bloggers or ill-tempered Komodo dragons, I’d probably choose the Komodo dragons. At least they don’t carry selfie sticks.

If anything, I’ve learned in the 15 years since I escaped Corporate America that getting to enjoy great things in life is often a matter of seizing one initial moment. You’ve got to befriend discomfort (link to my scienceofescape.com site) to grow yourself. That jittery -click- to purchase a flight or just saying “yes” to the unknown is what sets adventure into motion—then the good stuff starts to happen.

With that in mind, I packed the car and left Kentucky for the first time in 16 masked months. This turned out to be an excellent decision, but more on that later. 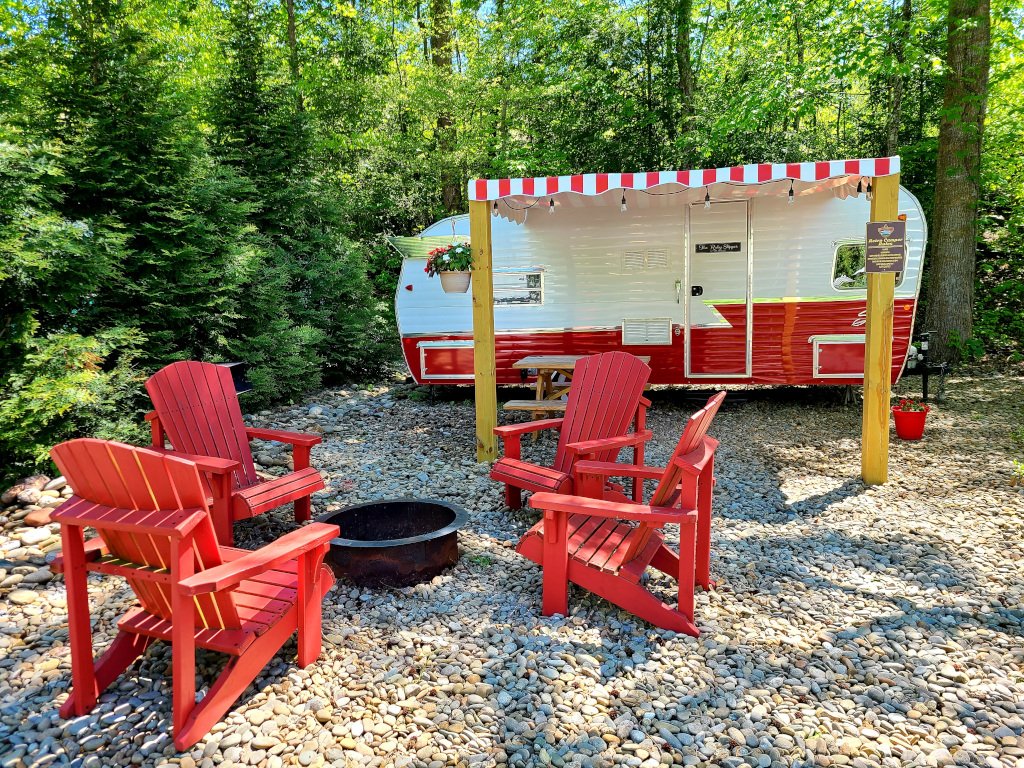 I spent much of the four-hour drive reminiscing about past trips. Although I’ve always been fond of the Smokies, I once relegated Gatlinburg as a place where I’d just eat and sleep between hikes. I remembered the Gatlinburg of 10 years ago, a place where people with dangling cigarettes stood in line for fudge or moonshine samples. In my eyes, it was a wasteland of T-shirt shops. All seemed to sell CBD, and a few carried ninja weapons.

Although the nostalgia is still real, I don’t need nearly as many ninja weapons as I once did.

But things are changing, and people are noticing. Believe it or not, Gatlinburg is now Tripadvisor’s number one trending destination in the United States.3 They keep breaking new records. I had such a good time there last week, I can see why. As I was expertly taught by Marci, my fearless guide, you’ve just got to do the right things. There’s a captivating subculture and plenty of substance beneath the sticky surface. Stay away from cotton candy wine (yes, it exists).

By the second day, I could feel the familiar tingle of my brain absorbing new sights, concepts, and culture. Man, how I missed that feeling! Enjoying novel experiences is like cognitive CrossFit for the brain. Those old vagabonding neurons knew exactly what to do and fired back up as if we were in Bangkok.

Even better, the dynamics of our diverse group exceeded expectations. They were much better than Komodo dragons. The eight of us came from all ages and walks of life, but somehow, against all forces of nature, we clicked. I don’t think I’ve ever said a somber goodbye at the end of a press trip before this one. And thanks to good leadership and colorful characters (without selfie sticks), I can say this was certainly my most enjoyable. 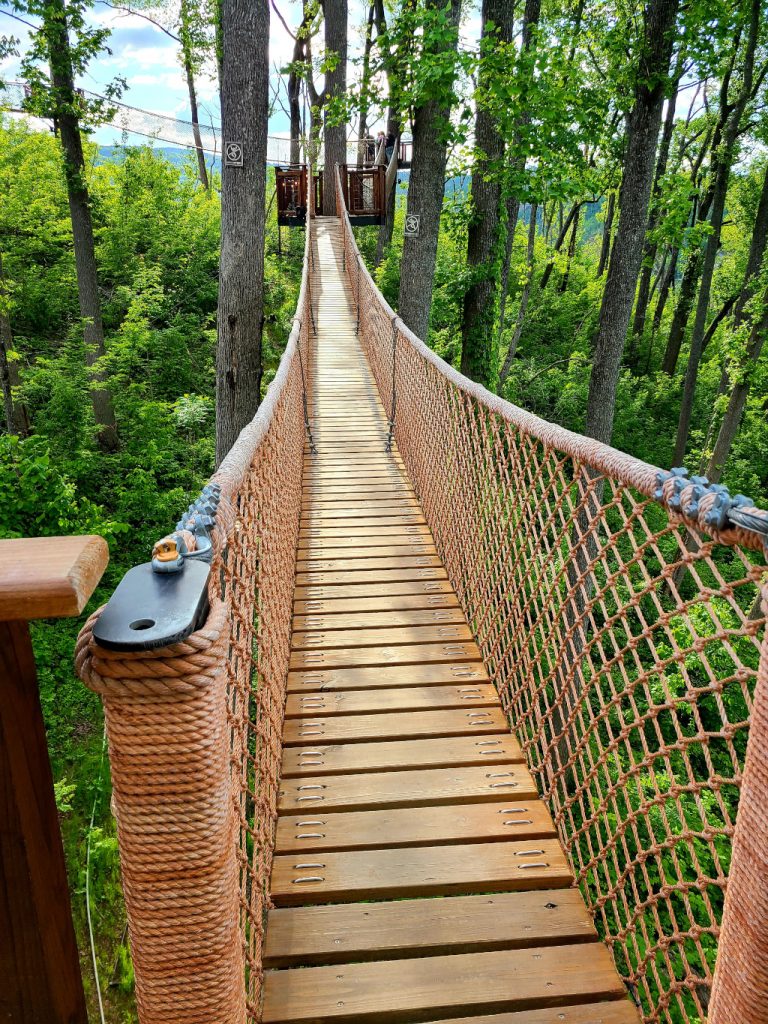 The canopy walk at Anakeesta 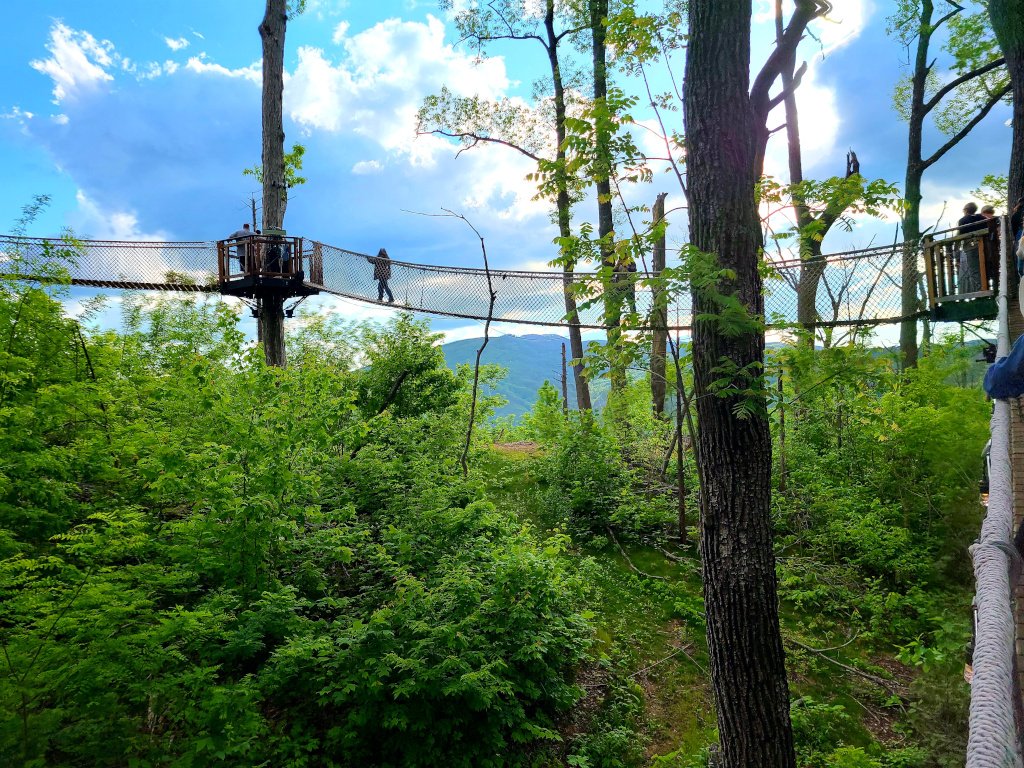 Within the first 15 minutes, I knew I was in good hands. The Appy Lodge, my base for the week, had an Appalachian Trail theme. The decor really had me craving another walk on the AT. Each of the rooms is named after shelters found along the trail. I was reminded of my frigid night in the Thomas Knob Shelter on Halloween 2014 when my pants actually froze to my body during a winter storm. I had barely thawed out a year later and didn’t want a repeat. So, just to be safe, I spent Halloween 2015 getting sunburned off grid in the Yucatan instead. There was no risk of frostbite at Appy Lodge; my room even had a fireplace.

Our first meeting was at Crockett’s Breakfast Camp, named for frontiersman David C. “Crockett” Maples. There I saw cast-iron skillets of food too big to lift or consume without injury. But what really stood out for me was the story of how Crockett survived a brutal winter storm (I can relate) but had to have his feet amputated (I cannot relate). Despite this setback, being the gruff old army bastard he was, he simply made himself two wooden feet, tied them on, and kept at it until age 88.4

Next, I got to meet bear expert Kim LeDozier, coauthor of the bestselling book Bear in the Back Seat. He taught me that you should play dead during grizzly attacks (luckily, it didn’t come to that during my bear encounter in Alaskan backcountry) but fight back against black bears. I’ll spare you gory details, but playing dead for a black bear doesn’t work as intended. Don’t do it. 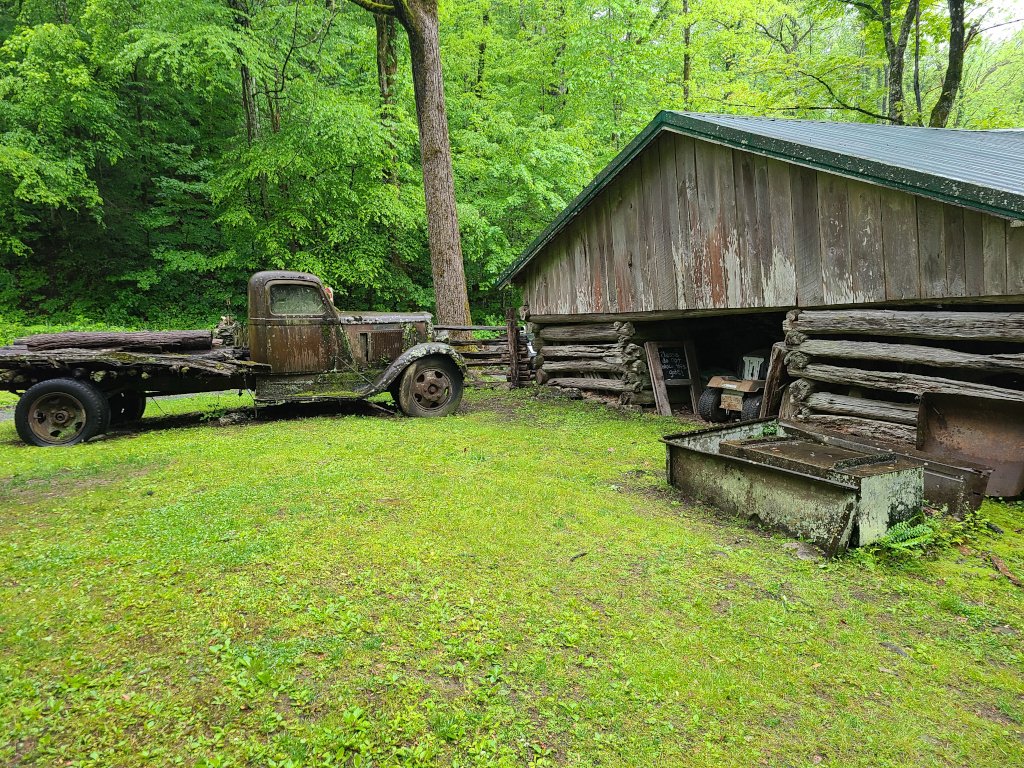 Ely’s Mill just outside of Gatlinburg

We only drove for 10 minutes to reach Ely’s Mill, a property built in 1925, but somehow it felt far removed from the main strip. A mountain stream rushed adjacent to the trail. A woodpecker added to the soundtrack. Wet weather had made everything an otherworldly shade of green. Mossy artifacts rusted silently in the Appalachian air. I felt like a curtain had been pull aside for a quick peek. How could such a magical spot be so close to town? How did I miss this place?

Maybe I had been too busy buying ninja weapons. 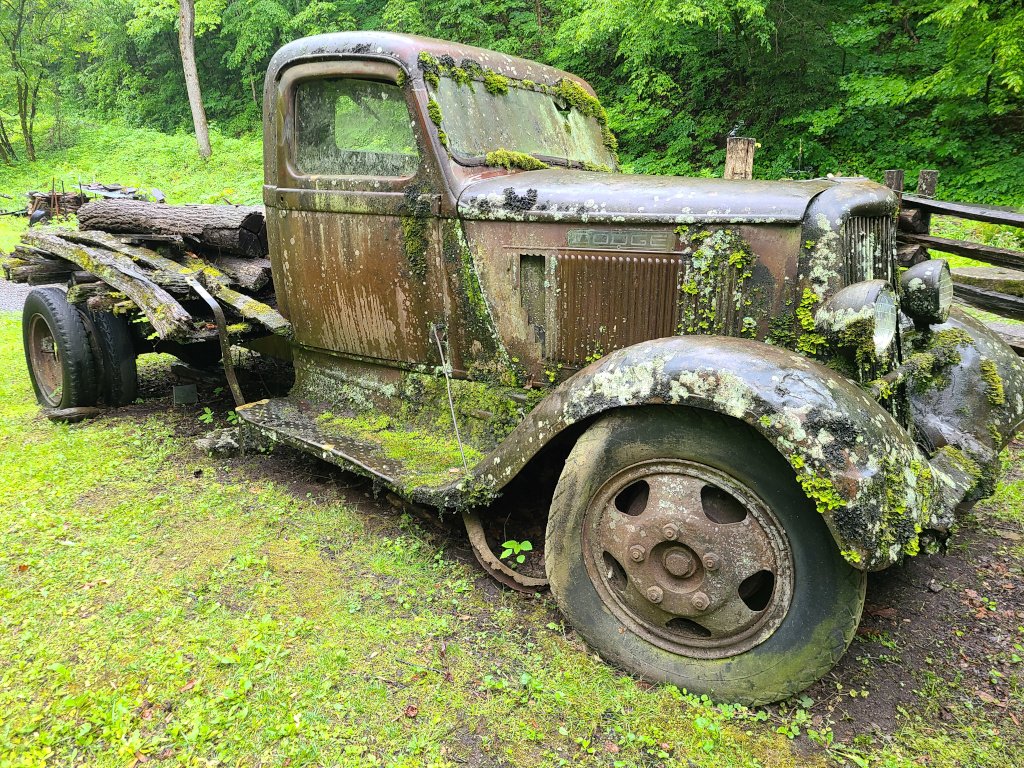 Arts and Crafts in Gatlinburg

As with anywhere in the world, your focus determines your reality and outcomes. If you spend all day in souvenir shops, you’ll leave Gatlinburg with a bag of Chinese tomahawks. Instead, if you visit the Great Smoky Arts & Crafts Community as I did, you’ll leave with something you’re proud of—and maybe some home-baked cookies. The eight-mile loop from Glades Road to Buckhorn Road was settled by artists and has been a thing for over 80 years. I can’t believe I missed it on so many trips!

At Cliff Dwellers, a gallery dating to 1933, I bought two gifts: an intricately painted gourd by Louise Bales and a leather bookmark marbled by Pat K. Thomas. I’d love to return and take one of the classes offered by these kind, talented ladies. I also watched a man work his gnarled hands to expertly make a broom fit for Tolkien’s Shire.

Artists along the loop have to be “juried” and meet stringent criteria. In other words, no frauds or imports allowed. Items are authentic and handmade. Even my lunch at Split Rail Eats was freshly prepared. For a gift or meaningful souvenir, go support these local artists.

My art from Cliff Dwellers Gallery

Back in town, I was treated to a tour of the Arrowmont School of Arts and Crafts by director Fran Day—an inspiring woman. The school was founded by a fraternity of strong-willed women in 1912 and has withstood everything from devastating fires to catastrophic funding issues. Making the visit even more special, I learned we were the first group allowed inside since the pandemic shutdown.

Arrowmont, like much of Gatlinburg, was nearly destroyed during the massive wildfires of late 2016. I got to hear the story of Bill May, the Executive Director, who defied evacuation and faced the raging fire with a garden hose before going for reinforcements. There were many heroes that night, but this is stuff straight out of Hollywood. Although two of the dorms were lost, the primary structures survived.

In some ways, Arrowmont was the birthplace of Gatlinburg.5 It was the site of Gatlinburg’s first schoolhouse, electric generator, telephone, healthcare, and newspaper. Thank you to all who did what they could to keep it alive.

Don’t get discouraged while running the gauntlet of tourist traps leading into Gatlinburg. Make your way through with haste—but not too much haste: That stretch is a happy hunting ground for Sevier County’s finest. Upon emerging on the other side, you’ll get a preview of the mountains, then you enter Gatlinburg from the north.

Gatlinburg is pleasantly pedestrianized, and many of the ugly utility wires were buried at great cost. Green initiatives are everywhere, even where you can’t see them. The bear-proof garbage cans are network connected and call home when full!

Yes, the strip is busy—and in places has a carnival-like, step-right-up atmosphere—but getting beneath the surface is easy. In contrast, cobblestone nooks like The Village actually feel a bit Bavarian. You can sit with an espresso and chat with strangers around a fountain. That’s what I did, and for a moment, was transported back to my time in Europe. 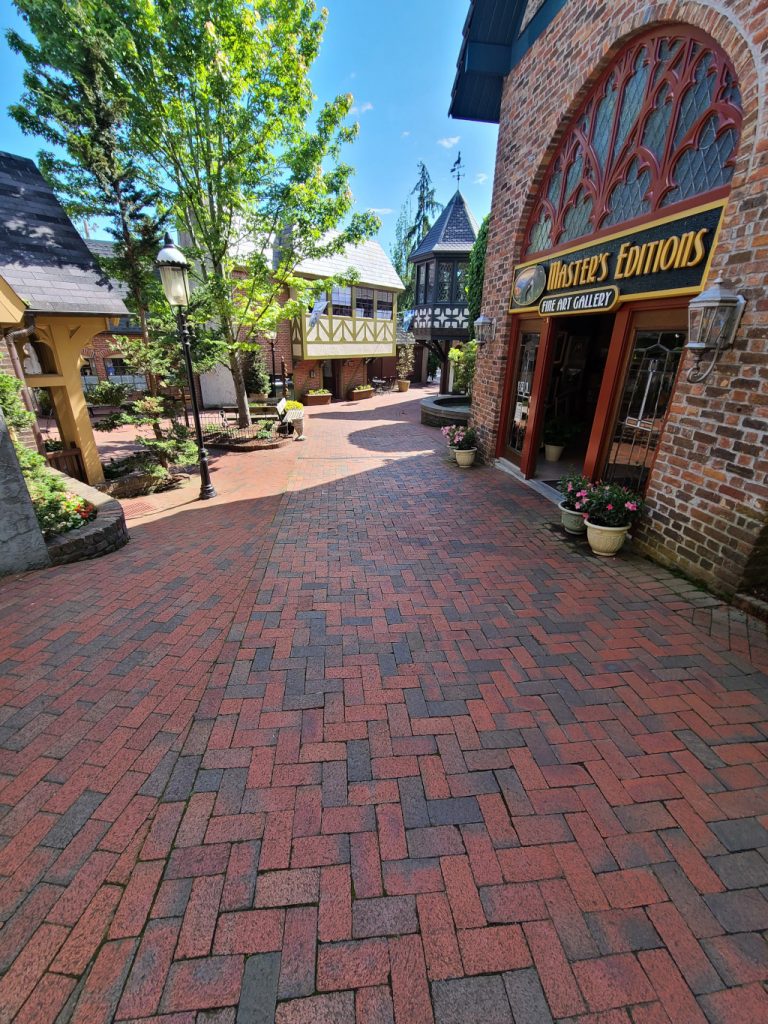 The Smokies are free, and they’re popular. In fact, the Great Smoky Mountains National Park had 12.1 million recreational visits in 2020. Coming in second, Yellowstone had 3.8 million visits the same year.2 If you want to see the synchronous fireflies or visit in July, you’ll need to book ahead.

Gatlinburg is so close to the national park you can literally walk or cycle out of town and into the mountains via a scenic trail; no driving necessary. In a little under two miles, you’ll arrive at the Sugarlands Visitor Center.

Drive a bit farther and you can stand on the Tennessee-North Carolina state line, or start walking on the Appalachian trail. The terminus in Katahdin, Maine, is 1,972 miles away—you’re going to need snacks. 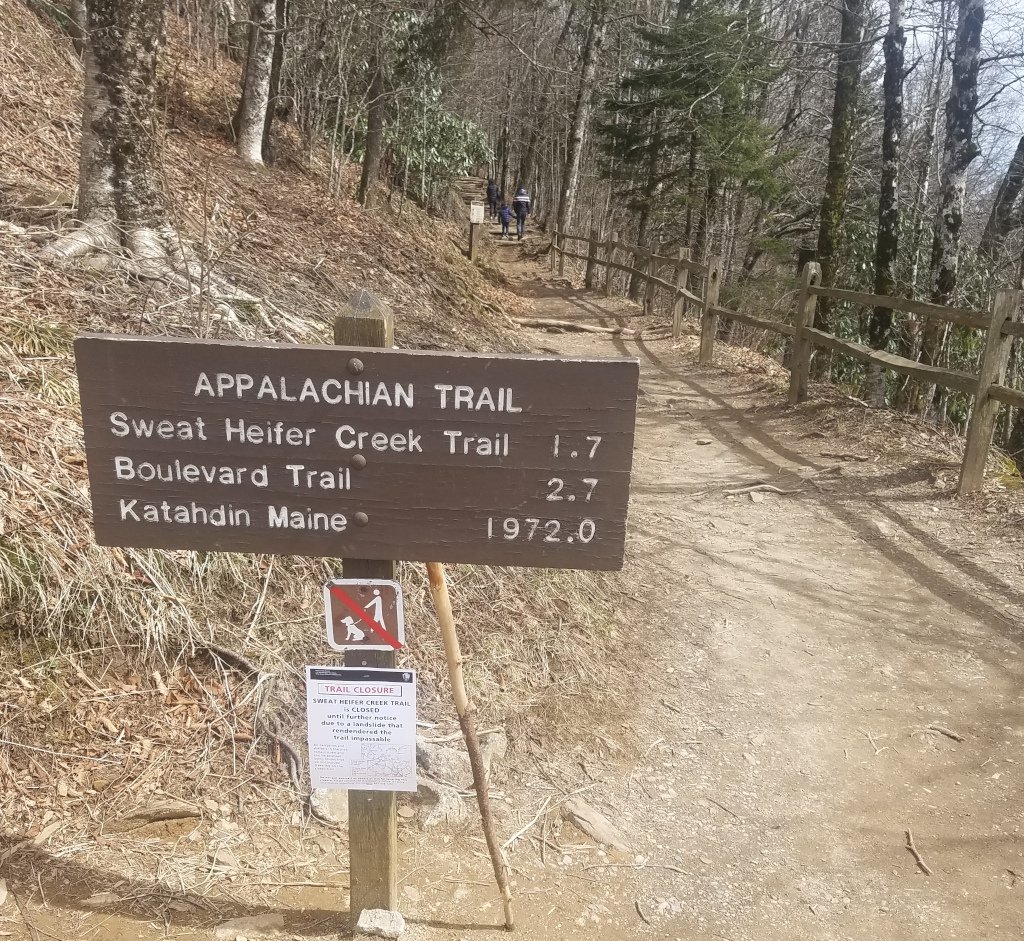 For one last adventure before heading out, I took the Gatlinburg Skylift up to get an aerial view of town. It’s been there since 1954 but ran as smoothly as ever. On the way up, my feet dangled over the Gatlinburg Inn where the famous song “Rocky Top” was written in room 388.

At the top, I crossed the longest pedestrian suspension bridge in North America (opened in 2019)6. Somewhere around the middle of the 680-foot bridge, you get the thrill of walking on glass panels. I paused to enjoy the view.

The wind had stopped, and the sky was clear without haze or humidity. My old friend Mount LeConte stood in the distance. Despite some tumultuous times in recent years, traveling was still as I remembered. Like Kerouac said in On the Road, “The world was suddenly rich with possibility.”

Looking out across those mountains, I realized everything was going to be okay. 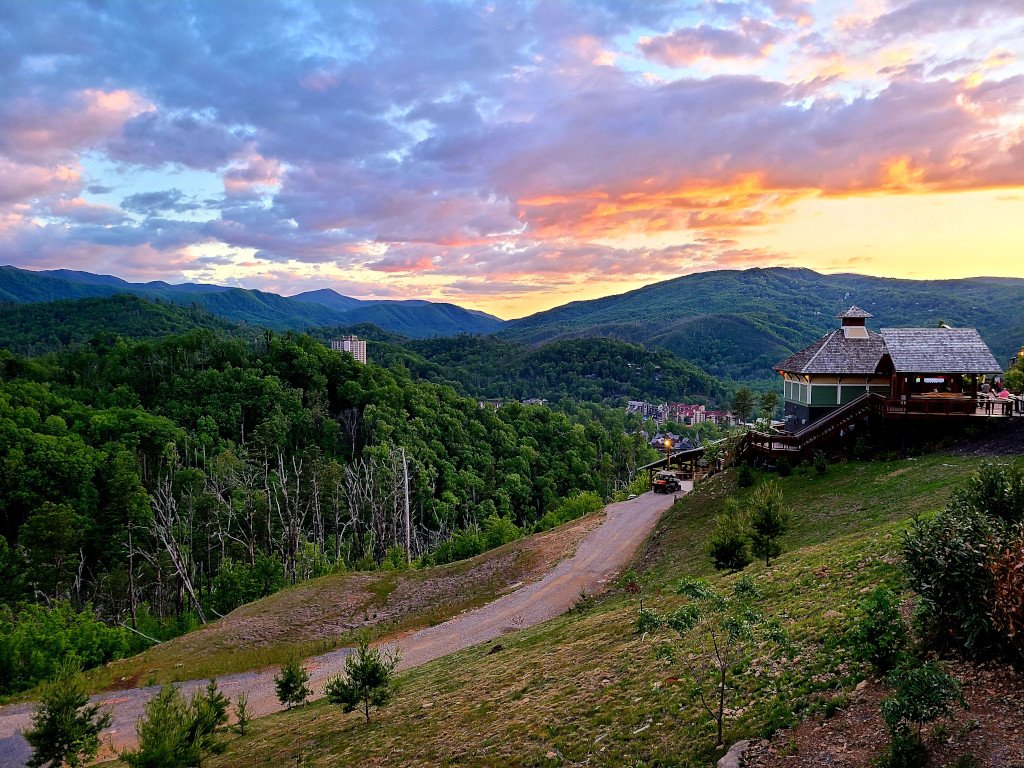 Disclosure: I was bravely invited as a guest of the Gatlinburg Convention and Visitors Bureau.

Previous Post: Shark Bay on Koh Tao, Thailand
Next Up: My Thoughts on Roadrunner: A Film About Anthony Bourdain