Thank You, Whoever You Are 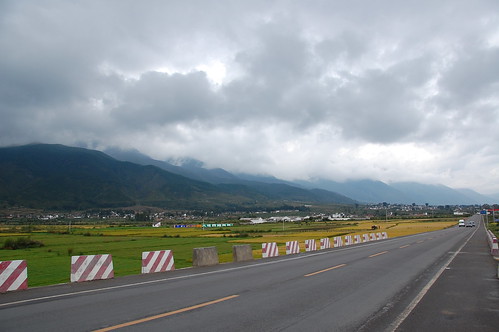 I was running down a narrow alley, chasing a crazed Chinese woman in her 40s.

She had my bus ticket to Dali in her hand and she had no intentions of stopping. We were literally pushing street vendors out of the way and my heart was pounding. I could barely keep up with her!

She was an angel.

I ate breakfast and hopped on bus #4 which was supposed to take me to the bus station where I had pre-booked my ride to Dali for 100 yuan. The woman at the hostel had told me that it should take 30 minutes to get there on the local bus, but an hour into the ride, I knew there was a problem. In fact, I was completely lost. As the time for my bus rapidly approached, I knew that I was totaly screwed. Not only were there no refunds, I would be forced to get another place in Kunming. A waste of money, precious trip time, and morale.

I decided to take a chance and showed my ticket to an older Chinese woman standing on the bus next to me. She didn’t even look that friendly! Her face lit up and she shouted at the driver, who opened the doors for us at a stop light. She snatched the ticket from my hand and went running into the middle of a busy street, where angry drivers lashed at us from all sides while holding down their horns.

At first, I thought she was completely mad, she was rambling in Chinese and ignored all of my questions. She stepped out in front of a cab to hail it for me, and pushed me inside. I expected that she was just going to give the driver directions to help me out, but she climbed inside!

She urged the driver to go faster and faster in angry Chinese, and that’s what we did. We were dodging bicycles and pedestrians with wild abandon and then I nearly smashed my face on the glass as the bewildered driver slammed on her brakes at a narrow alley. The mysterious Chinese woman threw money at the driver and we jumped out and continued our wild run through the alley. It was all that I could do to keep up with her while wearing my backpack. We rounded a corner and there it was:

The bus station I needed.

We ran through the station and she was yelling questions at people for directions in Chinese. We found my bus, which was already idling and ready to pull out. The cargo hold was locked and the irritated driver wouldn’t open it again, so I climbed on board with my pack. I told the woman xie xie — thank you — at least 100 times and she jumped off the bus. A moment later and she reappeared with a smile and handed me a bottle of water even! I could see the sweat streaming down her face, and she jumped back off the bus as it was backing out before I could even offer her cab money to get back to wherever she was going in the first place.

She had paid for everything.

Damn. What a good person. She completely changed my outlook and planted something inside of me that makes me want to help others as well. What karma. This place is full of surprises!

I couldn’t stop smiling as we pointed the bus west and I could see the sun hanging low in the mountains in front of me.

I know there is n0 chance of this Chinese woman ever finding me or this blog, but the world is a nicer place with her out there in the world. Thank you, whoever you are.

.
Previous Post: Music in the Park
Next Up: Arriving in Dali, China