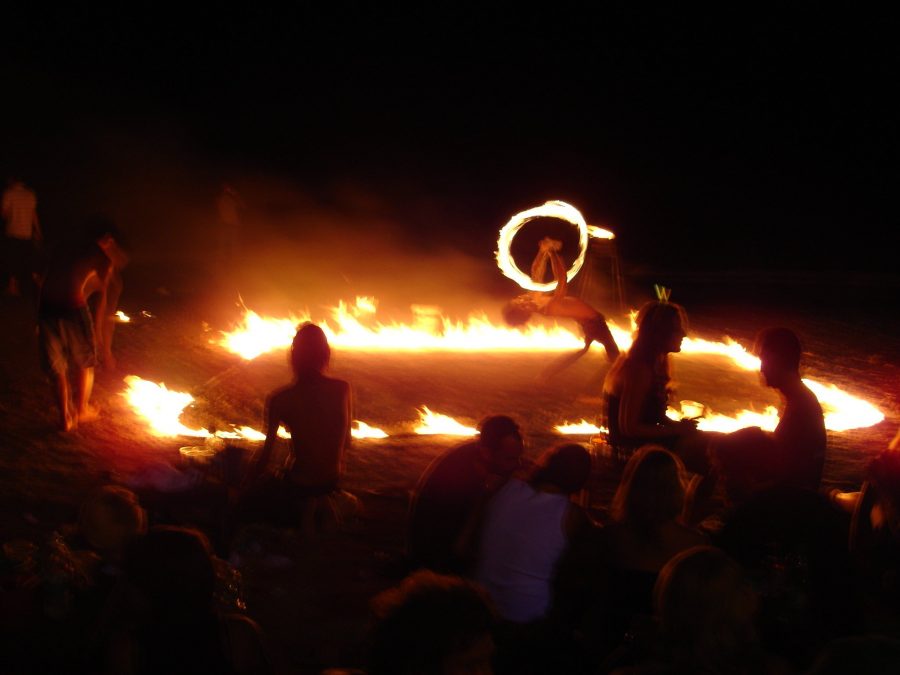 This post is about helping a traveler who was burned at the 2012 Full Moon Party in Thailand. And there’s a surprise update! The internet is a strange place, indeed.

Half-naked pagans probably did something similar thousands of years ago on some beach under a full moon. Only, unlike us travelers, they weren’t drinking from plastic buckets. At least I hope not.

Somehow, I still haven’t put a finger on it yet, but I found myself standing on the island of Koh Phangan, Thailand, for my third Full Moon Party in six years.

I must have killed too many brain cells at the first one or something.

I hate the Full Moon Parties in Thailand as much as I enjoy them. But where else can you watch the moon bring out the worst in 10,000+ strangers? One mantra that has served me well in life, the Army, and travel:

Go where the action is.

The Full Moon Parties on Koh Phangan have plenty of action. Generally, I’m on the Andaman side of Thailand enjoying life on Koh Lanta, my favorite island. For some reason, I answered the siren call of the 2012 Full Moon Party.

Thailand’s Full Moon Party is a perpetual train wreck that lasts until well after sunrise. Actually, some of the hardcore revelers begin dancing at sunrise when most of the kiddos have already succumbed to their buckets.

Not only can you not take your eyes off the train wreck, you just can’t help but climb aboard and ride it to the ground.

Oh, and there is fire at the Full Moon Party. A lot of fire. More about that later.

The Island of Koh Phangan in Thailand

Thailand — and particularly Koh Phangan — have changed a lot since I was first here in 2006. Technically, these travelers are “backpackers” only by definition because most bring along backpacks for their trendy attire. Long gone are the fisherman pants, guitar circles on the beach, and talk-to-everyone attitudes.

Instead, these new travelers come to “do” the Banana Pancake Trail for a month and never seem to adopt that long-term traveler attitude. Fashion, Facebook friends, and mindsets have all been brought over from England.

Nearly all travelers party — often too much — but these new travelers are essentially on a “spring break” for a month. They are only here because the drinks are cheaper than at home.

The sweet smell of weed no longer hangs in the air. In eight days, I saw only one set of dirty, unwashed dreadlocks. In eight days on Koh Phangan, I only met one traveler who was away from home for a year.

I had no idea I would miss those dirty dreadlocks so much.

Instead of hiding hair under a bandanna as travelers once did, the girls here spend an hour on their hair and paint sorority symbols on their bodies. The fraternity guys strut around like roosters with shaved, bulging chests hoping to attract someone dumb enough to mate with them.

I’ve never seen so many bad tribal tattoos on big biceps in my life.

It seems I have accidentally bought a ticket to Koh PhanDouchebag instead of the backpacker island I once knew.

I know I definitely sound like the jaded, crotchety traveler of old — and I am. But the scene on Koh Phangan has changed significantly.

Later, I met a long-time resident here who gave me some hope. She said:

Dancing at the Full Moon Party

Undaunted, I was determined to have some fun with these different travelers anyway, so I cowboyed up for my third party night in a row of watching the sunrise from a beach strewn with buckets and unconscious binge drinkers.

Like usual, I stayed in the famous Same-Same Guesthouse just off the beach. I met some nice travelers there at the warm-up party.

[2022 update: Sadly, my Danish friends had to sell Same-Same Guesthouse after the pandemic shut down travel.]

Awash in a sea of bumping hedonism, I instantly lost my newly met friends from the guesthouse. So I fought my way alone to the psy-trance part of the party, hoping to find a few more freaks and a few less douchebags.

I did. The bass literally rattled my vision. Psychedelic lights disoriented me, and I ground the soft sand beneath my feet like there was no tomorrow. I’m not much of a dancer, but in a setting like this, no one cares.

All was good for about 45 minutes. 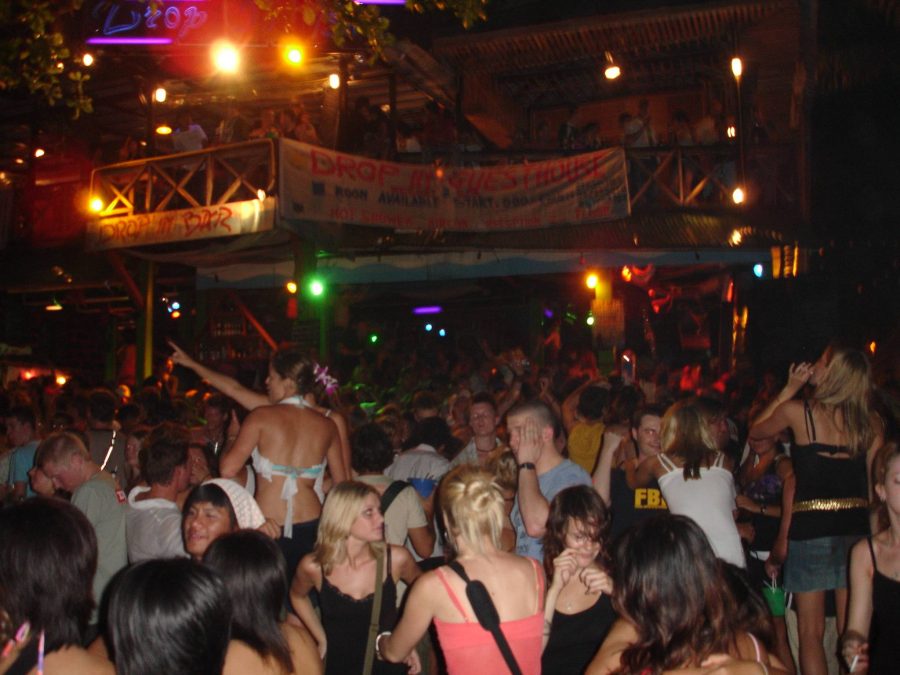 I should have known straightaway that the Irish accent was trouble, but instead, I took her up on the suggestion that we should go jump through the hoop of burning fire on the beach.

I thought, sure. I’ve done it before, and I could sacrifice some extra leg hair to the flame.

In general, I’ve found that “just saying yes” is the best way to make interesting things happen while traveling.

If someone ever approaches me and and asks if I’ll carry a kilo of something in my bum through the airport, I know to say “no.” But when someone asks about a mostly safe (in theory) adventure, I try to default to yes.

If you want more adventure, try taking the “yes” approach. You’ll end up with some stories to share.

Fire at the Full Moon Party

Everything at the Full Moon Party seems to be on fire or made to be lit on fire.

Tourists — particularly drunk ones — are openly encouraged to play with fire at beach parties in Thailand. Fire jump ropes, fire hoops, a two-story fire slide even. Yes, I said a fire slide. There are lots of creative ways to burn yourself here.

This is an absurd concept in the West, and it would probably cause a bar’s insurance representative to choke on his drink.

“You want to get people drunk and do WHAT with fire!?!”

A Traveler Gets Burned at the Full Moon Party

So we queued up and off she went with full bravado and speed into the fire. All started well.

Seconds later, I was running her to the sea to splash water on her smoldering legs.

The party was too dark and chaotic to notice how bad the burns were at first, but I knew that she was in trouble when I knelt down to splash water on her wounds. The skin hung loosely in big, bubbled blisters on her thighs. I could smell burned flesh.

I’m sure the salt water didn’t feel good, but it was all we had.

All around us people still danced and squirmed in ecstasy while she squirmed in pain. I knew it was time to evacuate.

The Clinic in Haad Rin

Third-degree burns can be a real buzz kill, so even though we had known each other only a few minutes, I found myself helping a screaming, hobbling Irish woman to the clinic.

She had no money, so I paid the equivalent of US $30 for her pitiful treatment, then carried her back to my nearby guesthouse because hers was on a different part of the island.

Like most smart travelers, she didn’t dare bring her phone or money to the Full Moon Party. She had lost her friends in the chaos.

The clinic in Haad Rin was overwhelmed with injured travelers who got drunk, climbed something to show off, and fell. Broken bones were aplenty.

As bad as the Irish woman’s burns were, they gave us some ointment, a handful of pain pills, and pushed us out the door. The clinic was in triage mode and didn’t want to fool with us.

My new Irish friend promised to pay me back but we never exchanged contact info. Who knows: Maybe I’ll get paid in karma one day. [See update below]

Confusion at the Guesthouse

We passed my neighbors, two English women, who were smoking outside my door. They who looked at us curiously as we hobbled inside. Understandably, given that I was helping my Irish friend walk, they assumed I had netted a drunk girl from the beach. We assured them all was well.

I could hear my neighbors talking, so I knew they could hear us through the thin, bamboo wall.

When I spread the burn ointment on my new patient’s wounds, she screamed at the top of her lungs: “Owww Owwww Owww…” but it definitely didn’t sound like passion.

Greg: “Just lay still, this will only take a minute.” (she was kicking her legs)

My Neighbors [in hushed voices]: “Oh my God, what are they doing?”

My Neighbors: [muffled laughter] “What the actual hell?!”

I can’t describe the look I received from them the next day. My reputation around the guesthouse is unrecoverable.

The painkiller the clinic in Haad Rin gave us spread threw her booze-thinned blood quickly. I now had an unconscious stranger in my bed, and I was too wound up with adrenaline to think about sleep.

What if the painkiller-booze combination caused something terrible to happen? I was afraid to leave her. Even watching her drift in and out of consciousness made me nervous.

And so, my 2012 Full Moon Party in Thailand ended almost as quickly as it began. I don’t even have an email address for the Irish stranger who left skin behind in my bed.

Thanks to this post and the power of the interwebs, I found her! Incredibly, one of her friends saw this post about a traveler getting burned at the Full Moon Party in Thailand, shared it, and amazingly, it got back to the Irish woman!

We are now Facebook friends and shared a laugh. I don’t know if or when we’ll meet again on the road. But she seems like a pretty serious traveler, so I think we’ll cross paths someday.

The road can be an unpredictable place sometimes, but I wouldn’t have it any other way.

Tip: For a psychedelic light show experience that doesn’t involve fire, buckets, or flying to Thailand, check out the Astra Lumina night walk at Anakeesta.