My Thai Massage in Chiang Mai – With Happy Ending 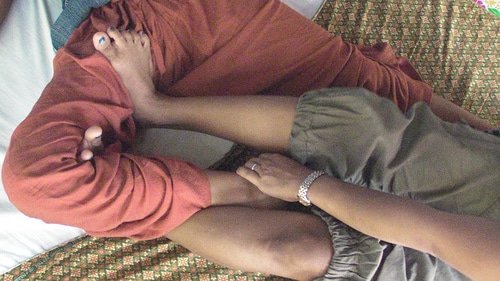 Disclaimer: If you’re really looking for a story with a happy ending (massage optional), go read about my happy escape from the corporate world (on my scienceofescape.com site) and what backpacking travel is really like. This story may not be as juicy as you hope.

I am writing this blog post in my head.

In fact, this post may be my only salvation. For the past 15 minutes, I have tried meditation, visualization, and everything else imaginable to take my mind off the fact that there is a woman sat on top of me.

Under normal circumstances, this would be viewed as a positive thing. But in this given instance, one of her thick arms is currently working its way up my leg, leaving a trail of tissue damage behind. Things are not looking good.

My only hope is that my travel insurance will cover the costs of a speaking computer such as the one Stephen Hawking used—I may need it to express myself once someone wheels me out of here.

This blog post, which is slowly materializing out of the pain-shrouded mist in my brain, is a distraction as I teeter somewhere between the abyss and instant enlightenment through suffering.

All around me in the darkened room are the sounds of exertion: popping, groans, grunts, and smacks of hands on bare skin. Not even a whisper interrupts the ambiance of what sounds like the warm-up for Roman gladiators about to enter the arena.

How did I end up here?

Just as when mortally hungover people flop around on the floor like dying fish the Saturday morning after a bender exclaiming, “I’ll never drink again!” they inevitably end up back in the pub a few nights later…

Here I am again.

I am attempting my second Thai massage in Chiang Mai. With neck and back aching after a 12-hour night train to the north, a massage sounded like a good idea at the time. Maybe it was the fact that the spa had a special: $3 for one full hour. Yes, Thai massage in Chiang Mai can be that cheap. Or maybe in a temporary lapse of judgment I thought I should give this world-renown style of massage another chance.

Maybe I was wrong.

For four years, I’ve been trying to forget my first Thai massage, and now I found myself sprawled on a mat again waiting to be squashed like a nervous cricket. My first Thai massage in 2006—performed by a woman with more upper lip hair than I have—broke any romantic notions of silk-robed Thai girls smelling of jasmine and padding around on tiny feet.

No, my masseuse smelled of garlic and cheap cigarettes. By the time that woman finished crushing me with her calloused banana-fingers, I realized for the first time what it was like to ooze out of a place like a slinky—bones having been crushed to dust. The old woman took such pleasure in giving foreigners pain that I was afraid she would employ mafia tactics by looking up my family to give them massages, too.

At least this time around, Lucy, my thirty-something masseuse, is a total sweetheart. She has soft hands, a warm smile, and a good heart. But she is also a sadist. Her pleasant smile makes her even more terrifying.

Pop! What was that?!

Thai massage requires the bending and torquing of joints and limbs beyond their natural range. Satan’s own torture handbook couldn’t compete with this stuff. Women with robotic hands strengthened over years of repetitive massage knead muscle fibers like putty. Sometimes you find your legs entangled with the therapist’s, both of you sweating, and wondering, “Gee, is that [insert joint here] supposed to bend beyond 90 degrees?”

Thai massage is the modern culmination of ancient medicinal brutality. Think of well-meaning doctors armed with saws during the American Civil War. Make no mistake: this is combat—and unlike UFC or mixed martial arts fights, there is no tapping out on the mat or screaming, “UNCLE!”

As my hour progresses and nerves beg for intervention to end this madness, I wonder if I will have permanent damage. The years of adventure have been good to my soul but not to my body.

My back—a little iffy anyway after a rock climbing fall—makes me nervous. When Lucy’s impossibly-strong fingers finally find their way to my groin, I had to stop her for the first time. A Gortex mesh—a gift from the surgeon after skydiving-gone-wrong in 2005—separates my guts from casual viewers. If Lucy presses down with all of her weight, she has the potential to pop me like a grape. I would hate to make a mess all over the lovely spa. Customers would surely lose their protein shakes.

Lucy complies and instead snaps my neck much like a ninja assassin would.

Despite Lucy’s best intentions, right now I am her puppet and my strings are pain. She is a master at pulling those strings. I’m certain she could make me do the moonwalk if she wanted. As she lumbers around me on the mat like a polar bear, I can’t help but look past the half-pulled curtain and envy my neighbor who has an attractive masseuse using pencil-thin fingers gently on his neck. Wait…is that bastard even smiling?

My hour passes languidly. As far as I can tell, we are nearing the end. At this point, my consciousness has left my body and drifted to the ceiling. Looking down, I can see some poor sucker really getting it…

But that shell, a quivering mass of numb flesh, is mine.

As I sit up, Lucy indicates that the massage is finished by smacking me with open palms. The blow to the head could have knocked out a Shaolin monk, but then something strange happened. A peculiar warmth—pure chi energy which was once blocked—began spreading across my chest and my limbs.

Either this is what the instant of comatose paralysis feels like, or something good has come of all this. Lucy knows her stuff after all.

Thai massage blends Eastern energy beliefs with deep tissue massage. I did not feel the warmth spread from toes to fingers during my first massage experience. The last time I remember this strange, tingling sensation of healing welling up from deep in my body was after getting acupuncture at my Shaolin school in China.

Whatever Lucy has done, it worked. As she helped me up, I was expecting to float back to the lobby on my cloud of new energy. Instead, it felt more like I was slinging numb, partially attached bags of meat—my legs and feet—in front of me.

My neck slumps, unable to hold the weight of my head. I’m quite sure that at least one rib is broken, and my spleen may be leaking. I am 170 pounds of chewed bubble gum. I must now get accustomed to crawling down Bangkok’s Khao San Road with no bones.

Not good, but assuming that I regain muscle control within the next week, not all is lost. My happy ending for this Thai massage in Chiang Mai was a cup of steaming-hot lotus seed tea. I feel renewed circulation warming my body. I also relish the thought of not having to do this again—at least for another four years.

I even tipped Lucy. Maybe she won’t go after my family.

Previous Post: Theft on Koh Lanta: Island of Thieves
Next Up: Some Notes on Backpacking in Hanoi, Vietnam