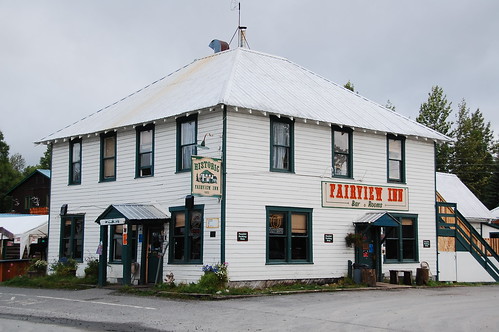 We rolled into Talkeetna, Alaska, in the evening, just as shadows were starting to become a little longer and the sun was getting a little lazier.

Being a proper road trip, we did not have a place to stay yet, which made dad a little more nervous than me probably. Dozens of times while vagabonding I have rolled into a town or island with no idea where I would put my head. And miraculously, things always seem to work out. If not, there is always the bus station!

The climbing town of Talkeetna is a tiny town with one main strip. You can stand at one end of the main road and see the other end of town. There are a couple of guide services, a tackle shop, a few small diners and places to eat, and the Susitna River flowing by carrying its gray volcanic silt from the mountains. It is also the type of place that you want to find while you are vagabonding. Despite being small, it was full of positive energy and chilled-out people.

Talkeetna is used as a base for people climbing Mt. McKinley in June and July. We had only missed climbing season by a few weeks, so things had not really shut down yet. After hitting a busy hippie pizza place — there were people table diving for left slices — and eating outside, our next mission was to find a place to sleep. There was a hostel in the center of town that was booked, but the nice, older woman named Pat allowed us to sleep in the detached bunk house for $25. Perfect!

The House of 7 Trees was definitely one of the nicest hostels I have ever stayed in the U.S., or anywhere for that matter; clean and cozy with lots of character. It was dad’s first hostel experience and a positive one, thank goodness. 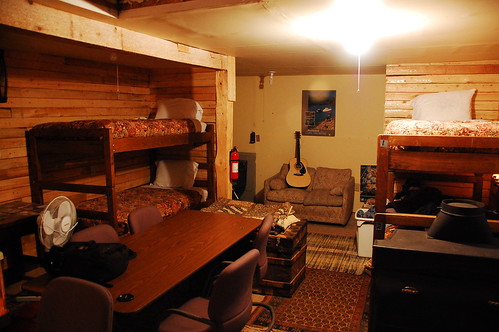 As usual, I wandered out after dad had called it a day. I knew if there was anything going on in this town it wouldn’t be too hard to find…so I did just that. I stood in the middle of the street for a moment and just listened. I could hear the faint sound of live music in the wind — and laughter — definitely the sounds of some good craic somewhere. The revelry was coming from a place called the Fairview Inn, and when I swung open the door, about 30 local faces turned in my direction and the Bluegrass music band all but stopped playing. There was a gasped silence for a moment as people tried to figure out who I was, then the place exploded back into dancing and laughter. I was the only tourist, and the only one out of probably 50 people crammed into this small historic building that was not dancing to Bluegrass music.

Wow, what fun! I made friends immediately with some pilots and bartenders that were just in Alaska working for the summer. They were all heading out in about two weeks and were determined to enjoy themselves and spend some of that hard-earned cash. I have no idea how to dance to Bluegrass, but I danced, and stomped, and clapped with the rest of them until 3:30 a.m.! Most of the people were working seasonally, but there were some hard-core mountain folk who had come into town for the throw-down. I met a couple of girls that had been living in a tent all summer and working. They were off to school back in the lower 48 in a couple of weeks. This was their fourth summer here!

Talkeetna turned out to be quite a surprise and everything I would want while vagabonding in the U.S. No doubt, 7 a.m. would come pretty early in the morning, but it was worth it!