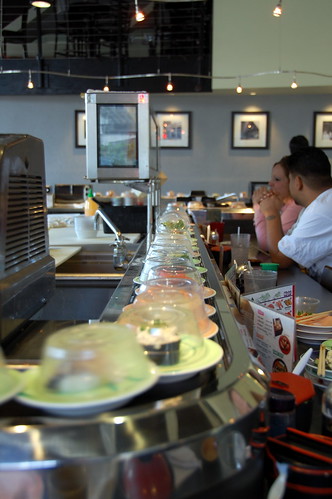 Another mystery box of divine Japanese goodness made its way around the belt in our direction.

I could just see the tantalizing tips of something hanging over the edges of the black box…are those suction cups…could it possibly be? YES!  Tentacles!

I grabbed the tiny saucer of raw goodness as it sped by me on the belt much like one protectively grabs their luggage from the baggage claim at the airport. Mine…all mine…and a blue plate at that — meaning the contents only cost me $2.00.

I devoured the fishy contents like a maniacal seal and stacked the plate onto our growing tower of empties that would be tallied at the end of the meal. So far, the sushi in Portland has my head spinning. 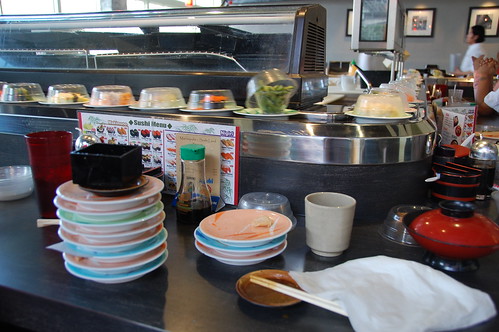 Or maybe it was the Wasabi. Leave it to the Japanese to create a sticky substance so disturbingly green, so undeniably evil, that it literally comes out of your eye sockets when you take too much in one bite. I am a certified wasabi addict and usually have the stuff seeping out of my pores for days afterward.

Once upon a very long, uncultured time ago, I used to resign sushi to the domain of costly Manhattan lunches and business eccentrics who were willing to pay more and leave hungry in order to impress their mates.

Now the times have changed; my tongue has grown up. And I would cross a continent — literally — to feast at a place such as this one. When my Alaskan friend Jessica suggested that we hit a local sushi place here in Portland for lunch, some primal synapse in my brain fired and I was overwhelmed with the desire to eat something that was happily swimming somewhere yesterday.

This was my first sushi in Portland experience and also my first go at a conveyor-belt-style sushi bar, or as the Japanese call it, kaiten-zushi. I saw sushi bars like this in Tokyo airport but not knowing the proper protocols or a word of Japanese, retreated to the relative safety of Western food. If I could only go back!

The concept is simple but brilliant. You pick a stool at the bar and watch as the Santoku-knife-wielding experts in front of you turn raw slabs of fish into artistic delicacies. The good news is that you don’t have to wait on them. In front of you zipping by at medium speed are tiny saucers of everything that you can think of. Fleshy sashimi, some edamame (soybeans), unagi (eel), boring California rolls (for newbies), and anything sushi-related your taste buds could desire are all tantalizingly within grasp.

When you see something that looks curious, you grab it, delicately dip it into your soy/wasabi concoction in front of you — and eat. And eat. And eat. It is far too easy to become mesmerized by the colorful saucers on the belt, and I found myself in another world just staring at the corner and wondering what would come next. The conveyor belt sushi is an excellent way to try new items, without having to commit to a large, $7 roll only to find out that you don’t care for it.

Our Portland sushi eatery of choice today was Marinepolis Sushi Land in the Pearl district, around 138nw 10th avenue. No…they did not pay me for that, but looking back I probably should have leveraged some free eel out of this article. 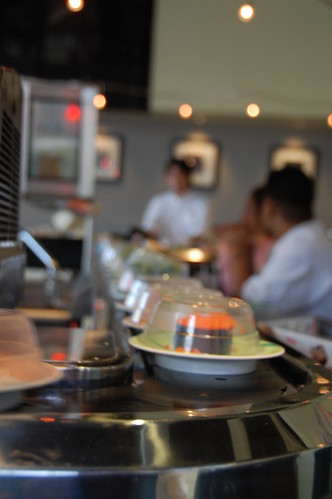 Before you know it, you have a leaning tower of empties in front of you and you have disintegrated into a sedentary, fish-eating monster much like Jabba the Hut. You at least share his preferences for eating, sleeping, and taking care of bodily functions in one place. Now, where was Leia in her golden bikini of every geek’s dream?  Who cares…there are still tentacled things to eat!

To just say that we ate sushi in Portland is a gross understatement. Conversation with Jessica was reduced to a few garbled slobbering noises. I was caught somewhere between a lucid fish-poisoning-induced coma and rampant hallucinations. At one point, I swear I remember envisioning gills on Jessica where her ears should have been. All this and not one drop of hot sake. Had they been sharp enough, I could have fallen on my chopsticks right then and there, and died a very happy man.

My stomach was groaning in protest as a small mountain of wasabi-covered rice began to expand and reach its full potential. Had someone outside made me laugh too hard, I’m quite sure a pink tentacle would have popped out of my nose and sent people running like hell down the sidewalk.

I vaguely remember cramming unagi eel rolls into my mouth as I was being dragged from the bar, kicking and screaming. Our bill came up to a whopping $10 each, not bad considering we had nearly just kept a tuna boat in business for next season. I wasn’t sure where we were heading next, but I hoped it was near the water. I must be put back into the water!