Up a Wild River in Borneo 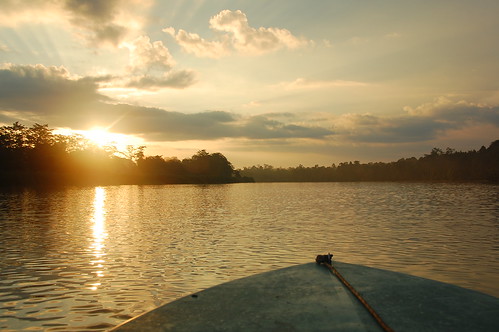 I turned up in the tiny village of Sukau in East Sabah, Borneo, not entirely sure what to expect.

The village — which pretty much consists of one narrow road — was basically shut down for Ramadan. So far, the Muslim fasting month of Ramadan has had little effect on my trip because the Chinese and Indians across Malaysia still eat. Suddenly I was happy for the emergency food (instant noodles) I was carrying around in my bag!

The tiny road in Sukau was lined on both sides with fruit trees and blooming flowers. The wide, muddy Kinabantangan River parallels the main road and is home to loads of interesting life — including 10-foot long saltwater crocodiles. I looked across the murky surface for a set of hungry, yellow eyes.

A three-foot-long monitor lizard waddled out of the bushes and onto the road in front of me — this truly was a wild place.

Three small guesthouses spread across the only road cater to travelers who — like myself — have come for a chance to view endangered species by boat. Guides run speedboats up the river into the inaccessible backwaters of Borneo where elephants, Sumatran rhinos, orangutans, and other animals do their best to hide from man.

When I turned up at my rickety, wooden guesthouse, no one spoke English. There were no reception, instructions, or signs of other travelers. The nervous woman simply handed me a key and nearly jumped out of her skin when I started asking questions in Malay.

Bhasa Malay, along with Bhasa Indonesian, are probably the easiest languages that I have encountered in the world. Between three months in Indonesia last year and three accumulated months in Malaysia, I can now butcher their language properly.

Through the perversion of this poor woman’s language and hand gestures, I found out that boats up the river cost around $10. The best chance of seeing crocodiles and wildcats was at night. After speaking with the boatman, I opted to go in the afternoon; the group before me spotted a huge python hanging in the trees. Any creature that rids the earth of one more macaque monkey is fine with me.

Armed with my camera, survival goodies, and a drybag in case we took a spill, I climbed into the little speedboat. The motor sputtered to life with a cough of black smoke and suddenly we were buzzing up a wild river in Borneo. As I watched the settlement disappear behind us, the sweet tingle of adventure started creeping through my veins.

My body radiated with chi energy and somewhere inside my primal brain a switch flipped over to survival. I felt back in my element. 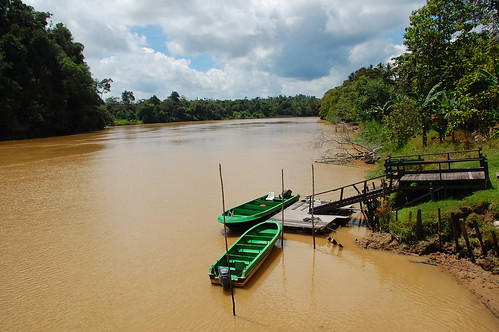 My warm hands gripped my camera as I scanned the riverbanks and dense treetops along the riverbank like a hunter. Muddy paths appeared now and then where crocodiles had slid into the water at the sound of our approaching boat; I never saw one. Just as the first sceptical thoughts of doubt about seeing wildlife hit my brain, the boatman stopped the motor. A family of orangutans was in the trees above us!

I saw my first oragutan a month earlier at the Semenggoh Wildlife Center in Sarawak, but the things were a pathetic site braving the camera firing line of tourists to take the fruit offering left on a platform. Nothing compared to seeing the real deal in the wild. Even better, one was carrying a baby; seeing an endangered species that had managed to reproduce on its own in the wild sent glee up my spine.

We moved on down the river and up a tiny side channel where I could almost reach out and touch the foliage. It was a great place to get ambushed. Every time the aging Evinrude motor on our boat gasped, I prayed that it wouldn’t stop. The leathery-skinned boatman was a hero. This guy knew his stuff; I would trust him in the bush any day. 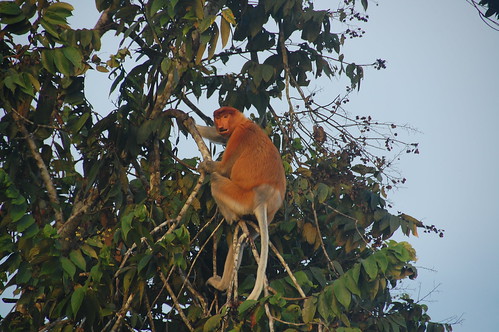 When he started making a barking noise at the back of the boat, I thought maybe he had finally had too much sun. Instead, a large tribe of proboscis monkeys — even more rare and endangered than orangutans — appeared in the treetops. He was calling them in!

The proboscis monkey is a pathetic site. Just as in the army, you can look at someone and tell that they probably can’t cut it. This creature was doomed from the start. Their huge noses, fat bellies, and ridiculous stances make them look a little too vulnerable in such a dangerous place. They look like crocodile bait. To make matters worse, the proboscis monkey can’t digest ripe fruit, which makes up a majority of their diet.

Yes, I was surrounded by fat, floppy-nosed, gaseous monkeys. 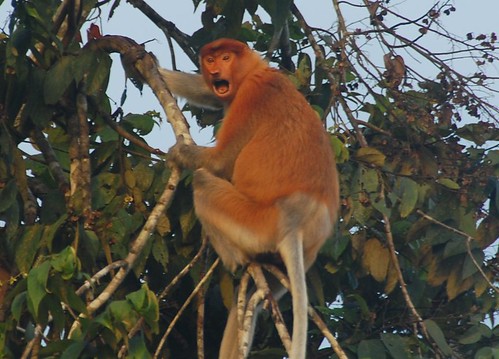 Only around 1,000 proboscis monkeys are known to still exist in the wild, and the population is still declining. I was looking at around ten of the strange creatures now — fascinating. One graying, fat-bellied male appeared with a harem of about nine females — maybe he was rich?

A little more exploring up the river turned up lots of long-tailed macaque monkeys and some red leaf monkeys.  Always my eyes went to the brown, muddy banks but the crocodiles were one up on us.

Around sunset we turned around and began heading back to the village. Along the way home we spotted several endangered hornbill birds and a pair of eagles. When I asked, I was told that it was the wrong season for the nomadic elephants which roam around the Kinabatangan River.

There are only an estimated 30 Sumatran rhinos in Borneo and 275 total in all of Southeast Asia. I didn’t really expect to see one. The effort to conserve the species was a disaster; 40 were taken into captivity in an attempt to breed them. Instead, most died without reproducing and biologists agree that they would have been better off left in the bush to do their thing. Amazingly, this extremely rare animal is still hunted just for its horn, which Chinese claim to be a cure-all natural medicine.

Malaysia wins the nefarious award of having the fastest-rising deforestation rate in the world. Logging — which I saw first-hand in Sarawak — and palm plantations are ravaging the rainforest faster than the animals can pack up and move. There are only two national parks in Peninsular Malaysia outside of Borneo, the rest of the jungle is fair game for whoever has the money. Once again, hearing a nasty statistic is one thing but actually coming here to witness it will give you a chill.

I thought of my young nieces and nephew — would they get to see some of the stuff I was seeing one day? How much will be left when they hit my age 25 years from now?

I left Sukau and the Kinabatangan River absolutely covered in mosquito bites, but with an intense new appreciation for endangered animals. Sure, seeing them on Planet Earth or Animal Planet while someone with an English accent narrates is a good thing, but viewing them in the wild will change your paradigm completely. 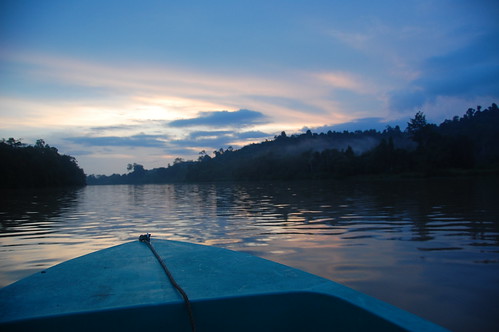