Yes, I took that picture. There are few things more challenging than trying to get 30 college girls to stop talking about their ramblings last night and cooperate for a single purpose!

About this time of year in 2007 I was busy dreaming about my trip to China when the phone rang. When I heard the voice on the other end of the line, my blood froze. It was Andrew, the producer from TPN for American Eagle’s Spring Break 2007.

“Pack your bags, you’re heading to Acapulco next week.”

Totally surreal, but somehow I had just won Bootsnall.com’s writing competition and earned my spot as a blogger/photographer/videographer for Spring Break 2007.

What I didn’t know at the time was that my first pre-paid writing gig would give me a backstage pass into a bizarre-but-real microculture behind the scenes for Spring Break. There exists a world of alternate identities, a hierarchy of popularity and “bosses” —  everything you would see on a typical Sopranos episode minus Tony and the violence.

I have been putting off writing this article for two years now, trying to figure out how to tread carefully without getting myself into a lot of trouble…but here goes. 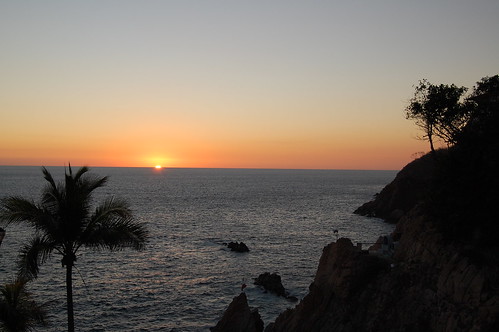 One short flight later and I found myself living the dream.

I had a house on a cliff overlooking the Bay of Acapulco. The open-air design had a bedroom and kitchen that opened directly into a swimming pool. From my dream home on the rocks I could see gargantuan cruise ships coming and going to help relieve the package tourists of their cash on cheaply made junk. My deck became quite popular for barbecues and parties. I even hosted a Texas Hold-em party with models and B celebrities from some of the MTV reality shows that were in Acapulco.

At night, as I sat outside under the Mexican stars smoking a spicy cigar, blacked-out speedboats would run the bay precariously hugging the rocks literally just below my house. There were no lights or markings, just the hum of the outboard and the orange glow of stealthy cigarettes. When I asked a local at work one day what that was all about he just pointed to his nose. 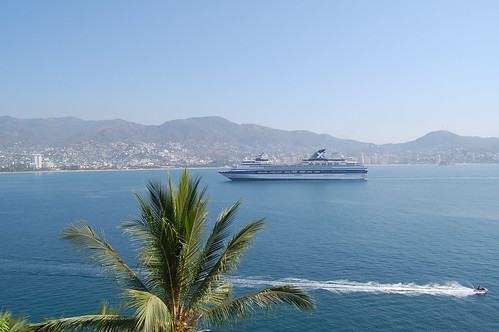 Acapulco, once one of Frank Sinatra’s favorite escapes, has transformed. Almost beat out by Cancun and less seedier places in Mexico, Acapulco is the aging, heavyweight of party spots — not quite as young and spry as it used to be, but it can still deliver a punch. After a decade or so of dark decline, two things are transforming the town back to a place for more than just the highrollers that filter down from Mexico city:

Jason and I stood shifting around the enormous crowd of well-dressed, affluent locals that were queued to get inside one of the most exclusive nightclubs in Mexico. We watched as a steady stream of Hummers and Ferraris would let out sport-coated mafiosos with long-legged supermodels clinging to their wealthy arms.

We were the only ones not speaking Spanish, and even despite our best efforts, we were terribly under dressed. Even the supermodels were being turned away by the bouncers, which incidentally were the largest, baldest, and meanest looking Mexicans I have ever seen.

Every ten minutes or so, they would touch a hand to their ear buds, then open the rope to a select couple. The mob would push forward but no one dared challenge these armed security mutants. We had all but given up and decided to go back to one of the Student City parties elsewhere in town to watch frat boys chant fight songs…

We spotted one of my local contacts met through Student City/American Eagle standing on the roof of the place in a white sports coat. Moments later, the bouncers were forming a wake through the crowd, specifically coming to get us! Jason and I looked at each other in disbelief. The Spanish chatter dried up as 300 surprised Mexican eyes took in the two white guys walking past the actresses and supermodels to go into the main entrance.

Once inside, I wasn’t sure if it was time to party or to prepare myself to be dumped into the Bay wearing some concrete shoes.

We went to the roof — which was the elite VIP area — and met my associates at their gazebo. The table was litered with expensive bottles; Petron, Stolichnaya, brandy. I’m also sure the cocaine was always chopped and ready. It was an experience. To tell the truth, the scene wasn’t really me; I would have preferred to dance in the sand below, but it was an experience — and a thrill.

A thrill that sucks people in during their two-month tour in Acapulco. I watched “normal” Americans down there for work just like myself become transformed by the power, lifestyle, and hierarchy.

Strangely, just because I was working with American Eagle and a newcomer, these local “contacts” which help make the arrangements between Student City and the local businesses adopted me straightaway. We partied together, we worked together, I was always given elite VIP status by these guys. They even invited me to hang out on their yacht.

Old 80s drug movies were always playing in the back of my mind. Would I be required to do a “favor” one day for these godfathers of Acapulco? Was there a horse’s head in my near future?

I hosted a big party one weekend at my house. The godfathers were coming to hang out with their white suits, cigars, the works. On the phone, one asked me what he should bring to be a good guest. I told him “whatever he wanted” (meanwhile saying a silent prayer that it wouldn’t be a kilo of coke or an Uzi).

“No problem mi amigo, I’ll take care of it.”

These aren’t the type of guys to show up at a party with a bag of chips or a veggie tray. They showed up with 20 live lobsters, fresh fish, and enough squid to put the damn things on the endangered list; probably a thousand dollars worth of seafood.

I told my new friends that they had done way too much, but he replied, “relax mi amigo, I had a seafood restaurant that owed me a favor.” Gulp. I made a mental note to keep these guys on my side.

And then there were girls.

And so, I was actually welcomed into the Acapulco empire. Days were spent shooting photos of students on the beach and writing up the madness in the evening. Every night was spent partying until my body nearly quit, then dragging home at 6 a.m. only to be back at the American Eagle Cabana at 10 a.m. the next morning.

My first week in Acapulco, I was pretty naive to what was going on behind the scenes — like a good ex-corporate, ex-army guy, I was just trying to do my job. Sometime in the middle of week two, however, as I was slowly accepted as an insider, I began to see the hidden microculture that exists within the Spring Break organization…

.
Previous Post: John Nance and the Tasaday Tribe
Next Up: Unofficial Rules of Vagabonding