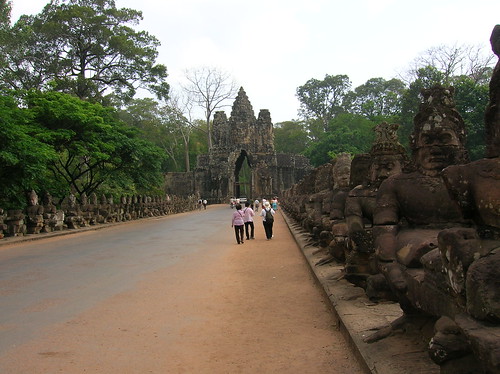 After a late-but-nice flight from Chiang Mai to Bangkok to Cambodia, I arrived in the tourist town of Siem Reap, closest to the famous Angkor Wat temple ruins.

The real name of the city in Cambodia is Siem Reap, which means ‘Siam defeated’ because of the bad blood between Cambodia and Thailand from wars past, but sometimes it feels more like Siem Rip-off to me because every time I touch my wallet in this country I seem to get financially molested.

The scamming started when I first stepped off the plane. The rather grumpy visa officials want US $20 as the visa fee; paying with Thai baht is fine. So I hand them a 1000-baht note and stand waiting for my change, the guy angrily tells me to move to the next queue. They had no intentions of giving me my $5 in change, so I snatched the note back off the counter and gave them my last US $20 bill to save the difference. A small thing, but so far, those small things have amounted to a lot of money for me over the past few days.

In fact, Cambodia being the poorest country I have visited, is also the most expensive by many fold. Almost all prices here are in US dollars and many are comparable to prices in the U.S.! A large bottle of water that was less than 50 cents in Thailand, can be as much as $1.50 here. Regardless, after reading books like First They Killed my Father, my heart goes out to these people. When the eatery is screwing me out of my proper change (which has happened several times already), I have to remind myself of what these people just went through during the Khmer Rouge.

I have never experienced such poverty. I had no less than six children walking behind me like some kind of twisted following, asking me for money. My heart went out to a guy missing a leg, I’m certain from one of the millions of landmines here. I reached in my wallet to give him a small bit of money. Before I got the note in my hand, I had people hobbling up to me, crawling to me, missing various arms, legs — sometimes both — all asking for money. Some were sincere, asking for water or food. Some just wanted money. I have given away more bottles of water here in the past two days just because I cant turn a man away when he is asking for water instead of money.

There is no social security system here, so the land-mine amputees who cannot work are basically screwed without resorting to begging. The mothers strategically use their children to gain sympathy. I am jaded because I witnessed a mother reach down and take a handful of wet filth from the street and rub it on a clean baby’s face. This was around the corner from the market and she was no doubt preparing for a ‘nights work’ in the market of begging from tourists.

Prices in every shop and restaurant being terribly inflated. This is the first place I have been in Southeast Asia that when you stop to look at a menu in front of a restaurant, the hostess starts bargaining with you and offering ‘special discount’ from the menu prices.

But there is a lot to see and do here. I just have to get used to doing it with a following of beggars, dirty children, and tuk-tuk drivers chasing behind me. Unfortunately, I know that this is not the ‘real’ Cambodia and that they are just a fledgling in tourism, but it’s hard to escape the ever-present draining of your wallet here. Angkor Wat, when it first became public in the early 1900s, seemed to only draw adventurers and rich tourists who would come from France and Europe in motorcades. With these prices, it seems like maybe not much has changed.

From what I can tell, Siem Reap is just a necessary evil to enjoy the ruins of Angkor.