I tried not to show any signs of pain as the boiling oil splattered across my body.

No, I was not on the wrong end of a castle siege, I was actually paying for this opportunity. Chengdu is famous for its food, so tonight a guy from the guesthouse talked me into trying a local specialty: the Sichuan hotpot. 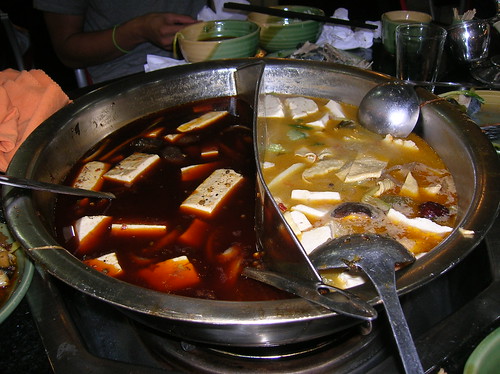 The hotpot in Chengdu is a little different than hotpots in the rest of China, but the concept is still the same. Gas burner in the middle of the table, giant cauldron of boiling oil, and you cook your own veggies and meat. In this instance, the only thing they offered in the restaurant was catfish, so we had over five kilograms (yes, more than 10 pounds) of catfish dropped into our pot along with tofu, noodles, veggies, and any other random object within an arm’s reach. They call it hotpot for a reason: every slip of someone’s chopsticks renders a splash of very unpleasantly scalding, skin-removing oil.

Since no one in the restaurant spoke a word of English, it took a group collaboration to even get that much ordered. Eventually, our struggling server invited myself and Anna — a French woman who decided to ride her bicycle across China — back to the kitchen to point at what we wanted. Wow.  An opportunity to see what goes on behind the scenes in an authentic Chinese restaurant?

At least before eating. It’s a bit like asking what’s inside an eggroll before you eat it. Some things are just best left a mystery.

In the kitchen, five startled cooks looked up at us foreigners and then went back to their task of bashing live and squirming catfish against a stainless steal counter in order to subdue them long enough to be gutted. There were fish guts everywhere, live fish, dead fish, and many of the cooks or kitchen help were smoking. Their two-inch ash dangling precariously off the end of a cigarette pinched in their lips as they hovered over food. 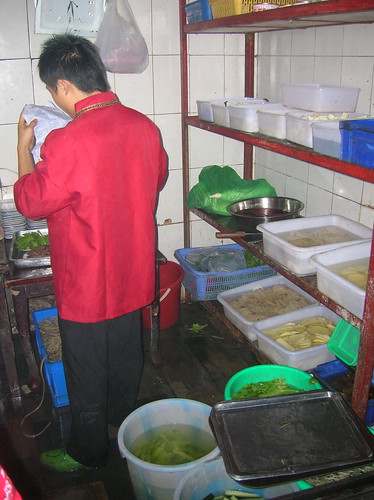 We were taken to the back where all the raw ingredients were kept. On the floor, midst some ash and cigarette butts, was a box of raw noodles. The chef actually got his leg entangled in them, stepped on them, then unwrapped himself and put the noodles back into the box for later cooking. I made a mental note not to order wide egg noodles.

After pointing out everything that we wanted to sample, we took our seats again and waited for the madness to begin. The server began the meal by giving me and my buddy the two heads of the catfish, straight out of the saturated fat…I mean…oil. Apparently, this was the best part and an honor. It was the first time that I have ever eaten the brains of a fish while the whiskers twitched and eyes looked at me. For being the choice part of the fish, there really isn’t much muscle or good meat in a head!

All and all, other than the third-degree burns I received on both wrists from myself and others losing items out of our chopsticks into the boiling oil, it was a great meal and one hell of an experience to remember. The total was something like US $6 each, expensive by Chinese standards — but then again, I have to find something to write about don’t I?

Previous Post: From Yunnan to Sichuan
Next Up: Happy Halloween from Chengdu