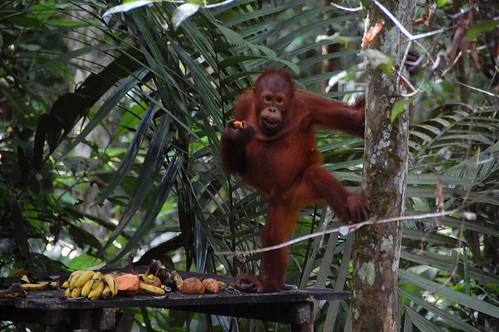 After being attacked by monkeys a few times already, even here in Malaysia, I’m not normally too thrilled at the prospect of going in search of them.

It’s not that I don’t think they are cute, it’s that one scratch from their poo-flingers or one bite on the hand from not letting go of my $1,500 SLR fast enough when they grab it equals rabies shots.

I made an exception today and went to the Semenggoh Wildlife Rehabilitation Centre just south of Kuching to see some orangutans in the wild. Orangutans are native only to Borneo and Sumatra. They seem to be friendly enough — for monkeys anyway. 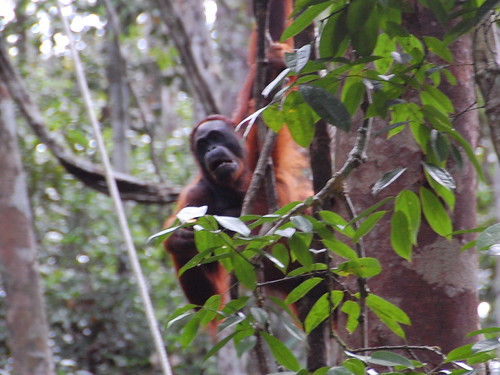 Getting to the wildlife center — what should have been a simple task — turned into quite the vagabonding mission. The usual bus that goes the 40 minutes south didn’t run, so I found myself taking another bus and sweating my soul out as I wandered around lost in the 100+ degree heat. A couple of stops to ask directions in Bahasa Malay — one of which I had to act like a monkey to make an old man understand — and I finally crawled into the center around 2 p.m.

Orangutan means “forest people” in Malay and sounds similar in English. For some reason, I can’t pronounce it right in either language!

Unlike zoos or tourist traps with animals in cages, the Semenggoh Wildlife Rehabilitation Centre was legit and has a big burden for the animals. Their first priority is to get the orangutans back into the wild rather than to keep them around.

In fact, much to my disappointment, they no longer allow people to walk through the refuge unescorted. You now have to hire a ranger to take your group in search of orangutans. I have enough hunting experience to know that six people — especially tourists — don’t have any chance of getting down the trail without sounding like a stampede. Orangutans aren’t endangered because they are stupid.

My dreams of stalking around the jungle with camera in hand were soon dashed.

If you don’t want to pay up for a guide, your only chance of seeing an orangutan is during the daily feeding time. It turned out exactly as I had expected: scores of tourists formed a firing line and opened up as soon as the first bashful orangutan finally showed itself. The rangers repeatedly told people to turn off their camera flash and to be quiet, but apparently those instructions were far too complicated.

Even cell phones were ringing while we stood sweating in the jungle waiting on these shy creatures to come get the fruit left on a platform. Appalling. These were the same tourists that took an air-con taxi from the Hilton in Kuching to the center while I sweated and did monkey-masquerades to find the place. I hope my smell offended them. 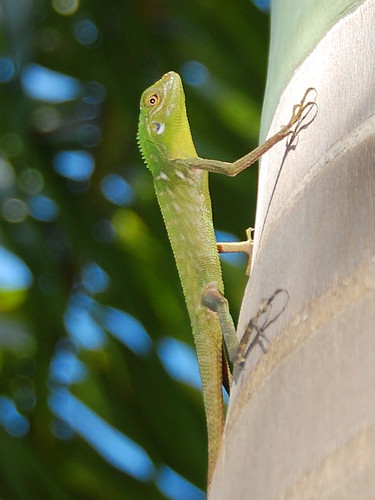 I did get a couple of photos but altogether saw only a small handful of orangutans. Even still, any day when I get to see an endangered animal in a natural habitat is a good day.

Lao Tzu said: “a man with no expectations is never disappointed.” I came expecting to walk around the jungle and instead found the Borneo equivalent of Disney World. No worries, there has to be some wild corner of Borneo left somewhere, and I’m going to find it.