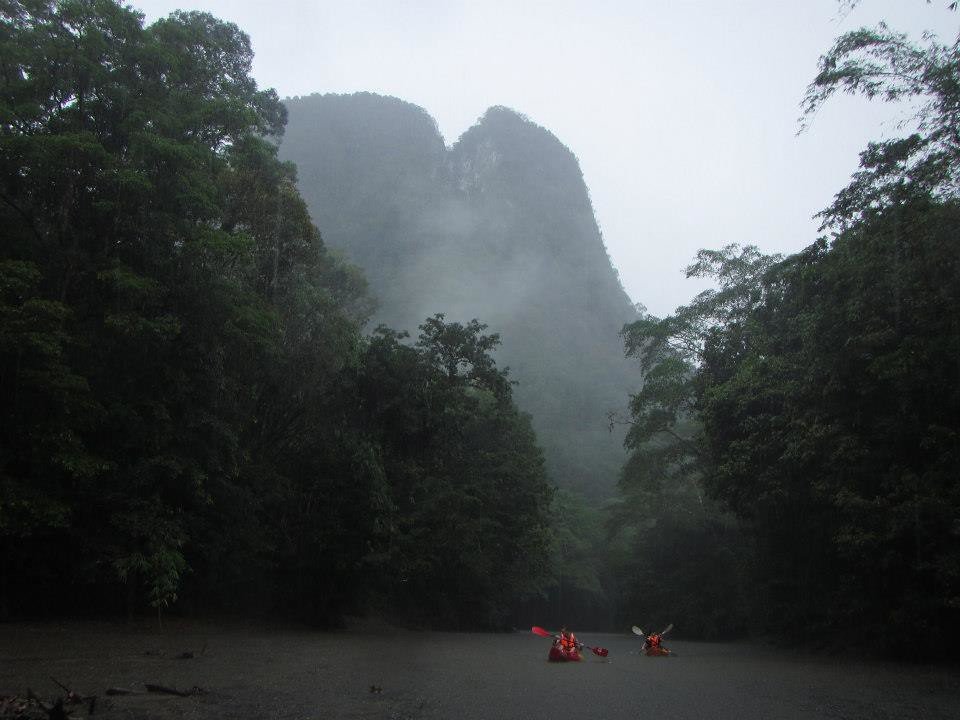 I flipped my boat in some shallow rapids while wild kayaking in Sarawak, Borneo. I came up laughing but knew right away that something bad had just transpired.

That same sickening twist in the pit of your stomach, the gut feeling of inevitability, when reality overcomes fantasy — the moment when you know that you’ve sustained an injury that can’t be shrugged off with some John Wayneism. The last time I felt the same was after a sizable wave showed me who was boss in Sri Lanka last year and bent my thumb to a new, creative and obscene angle.

This didn’t hurt as bad, but it was going to require unwelcome changes in my foreseeable future. I definitely had a new entry on my list of travel injuries sustained over years on the road.

As I lifted my knee out of the river and tried to right my kayak, there it was, something that you don’t see every day: my kneecap. A fraction of ghastly white bone was peeking through a gash surrounded by pink, watery blood. The wet, elastic skin opened wide, making it look worse than it really was. Getting stitching was inevitable. 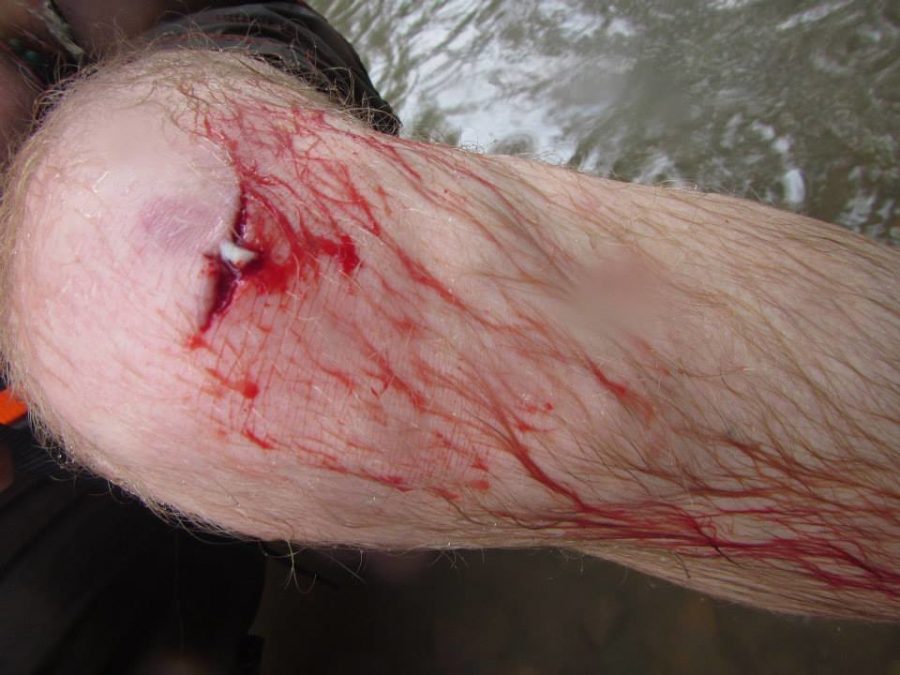 Each time water (of questionable safety) rinsed the wound, there it was again — my kneecap. I climbed back into my boat and tried to ignore the injury; the last thing I wanted to be was the one casualty in our group of four. The fact that I had plenty of kayaking experience and that my wipeout was less than spectacular in knee-deep rapids only added insult to injury.

We had all laughed as the tiny, unseen rock flipped my kayak in slow motion. I figured it would just be a good-natured dunking.

Regardless, I had to let our 18-year-old guide know, and to his credit, he expertly evaluated the wound and patched me up in the field despite the pouring rain. This kid was a total wilderness rockstar and as good a medic as I ever met in the army.

We paddled on. Hours down a remote river in Borneo near the border of Kalimantan, Indonesia, is the last place to whine and pout about an injury. No helicopters were coming; it was time to paddle out, and that we did so in the pouring rain. 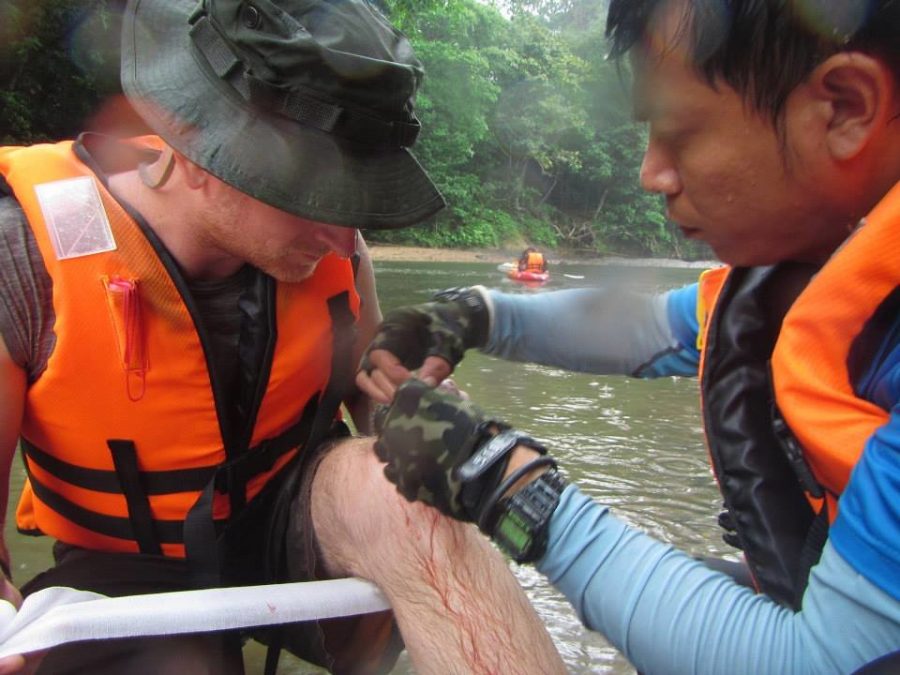 A Kayaking Adventure in Borneo

Even the rain and small injury couldn’t put a damper on this kayaking adventure in Sarawak, Borneo. As lush, jungle scenery passed by and steam rose from a mysterious mountain in the distance, I was high on adventure and life. Being in a place like Borneo’s rainforest just puts a fever in your soul.

The jungle infects you to push deeper, look a little more, learn something new, go to the edge. I must have been shown at least a dozen different species of unknown plants that indigenous people have been using as medicine for generations.

It’s hard to believe that men are willing to bulldoze all this beauty to make Mercedes payments.

A few of the jungle herbs were claimed to cure ailments ranging from diabetes to cancer. Not only are these plants full of unknown phytochemicals sitting quietly in the shadows of Borneo’s interior waiting to be discovered and researched by someone with a budget, they are disappearing. Big Pharma companies probably don’t want you to know that these forest people thrive despite not having a doctor available for days in any direction.

I like a soft bed as much as the next guy, but every minute spent at my lavish hotel in the city knowing that this headhunter’s playground of jungle and forest loomed nearby was like being eight years old again on Christmas Eve. I could feel myself growing softer while the jungle grew stronger. Mirrors would be punched out soon. Well, not really, but morning couldn’t come fast enough, and with it my ride to one beautiful adventure in Sarawak, Borneo. 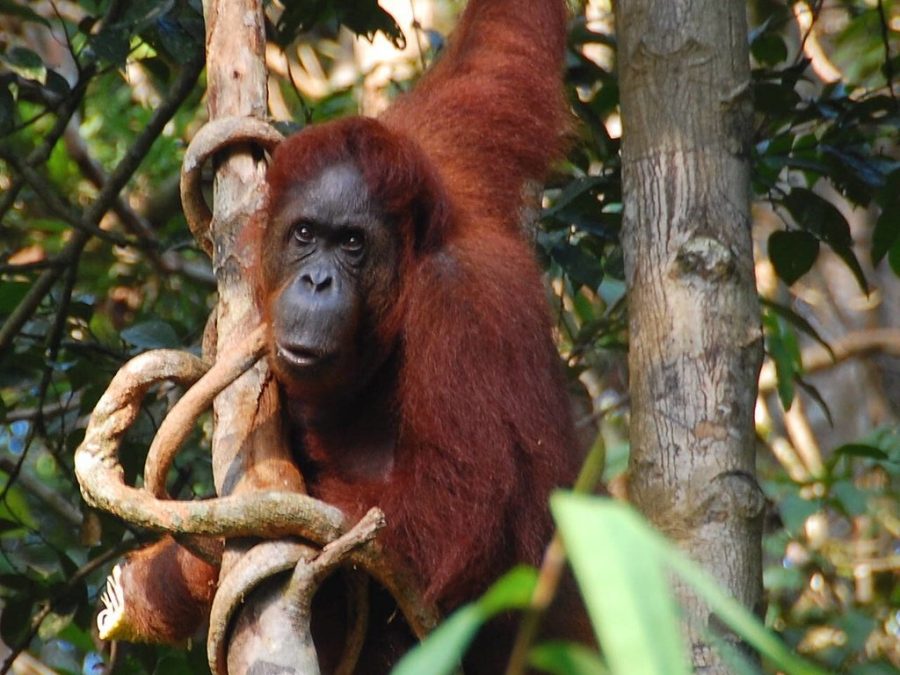 The morning began with my second visit to Sarawak’s Semenggoh Wildlife Rehabilitation Centre, just 30 minutes outside the clean capital of Kuching. On my last visit in 2010, I did see quite a few of the endangered apes, but this time was special. This time, Ritchie — the resident alpha male — made a rare appearance that both thrilled visitors and increased the rangers’ stress levels just a tad.

Born in 1981, Ritchie is one big guy, and his bulging arms are to be taken very seriously. When he took to the ground, everything with a sense for survival — smaller orangutans, tourists, and rangers alike — gave him a wide berth out of respect.

Lucky for us, Ritchie was much more interested in the jackfruit than he was in yanking random arms from sockets — something he could do without effort. Orangutans are peaceful creatures; however, like any wild creatures, they have their moments. I interviewed one ranger at the center who had just been relieved of a couple extra fingers by a moody female known as “Hot Mama” two months earlier. His fresh stubs really helped the warning message hit home. 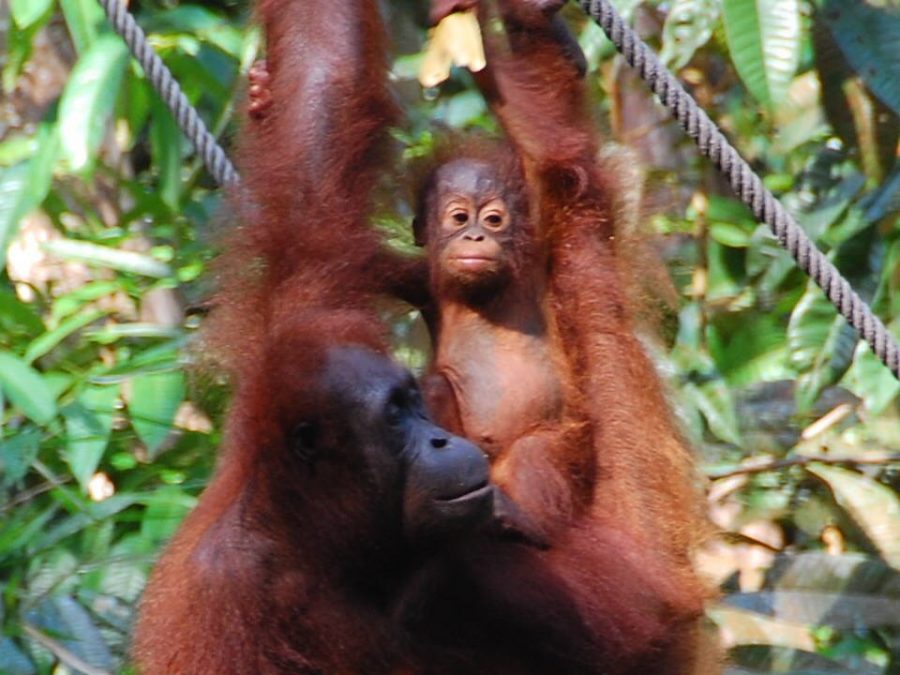 After confirming just how much I love these fuzzy, intelligent creatures, we drove to the Semadang Kayaking adventure center where I joined three other Malaysians on an adventure down the river. The low water levels of the river had me concerned at first; there appeared to be a lot of butt scooting in my immediate future.

Instead, the river opened up, water became deeper, and the wet jungle swallowed us. Vines drooped from trees, settlements along the banks were sparse, and only occasionally did we pass village fishermen grinning toothlessly as they showed off their catches. The white noise of the water pouring over smooth boulders was punctuated by cries from birds and the splash of unseen animals entering the river. I assume they have crocodiles here as they do in the Kinabatangan River in over Sabah, but I didn’t ask.

Seeing the rainforest by kayak has its advantages. You can go deeper into the interior, remain far more quiet, and you don’t even have to worry about things with teeth wanting to pick a fight every time that you stop moving. Most importantly, gliding along by boat keeps you quiet.

I went with a new-but-professional outfit known as Semadang Kayaking Adventure (www.semadangkayak.com) in Sarawak. When our friendly guide found out that I was interested in survival food and natural medicine, he willingly gave additional sweat just to locate plants and herbs to show me.

We took a couple breaks from kayaking throughout the day to check out riverside caves, a waterfall, and even walked through a village to eat lunch and see the herb gardens. We were well received.

As a bonus, the guide took scores of photos with his waterproof camera. No need to risk dunking your camera/phone or spend the entire trip worried about capturing the moment. They don’t even try to sell you a photo DVD at the end; it’s thrown into the package for free. All of these photos you see here were taken by my guide.

As a photographer, it was a big relief to not have to spend the entire day looking through a viewfinder. Instead, I could relax and enjoy the moment with my own two eyeballs.

I walked away from my kayaking adventure in Sarawak with more than just the obligatory Facebook pics. I learned about several new species of ferns, plants, and even a little about life along one of Borneo’s interior rivers. Unlike money or shiny things, once something this special is stored in the memory bank, it’s yours forever.

And as for the knee: If you don’t accumulate a few scars along the way, you just aren’t trying hard enough! 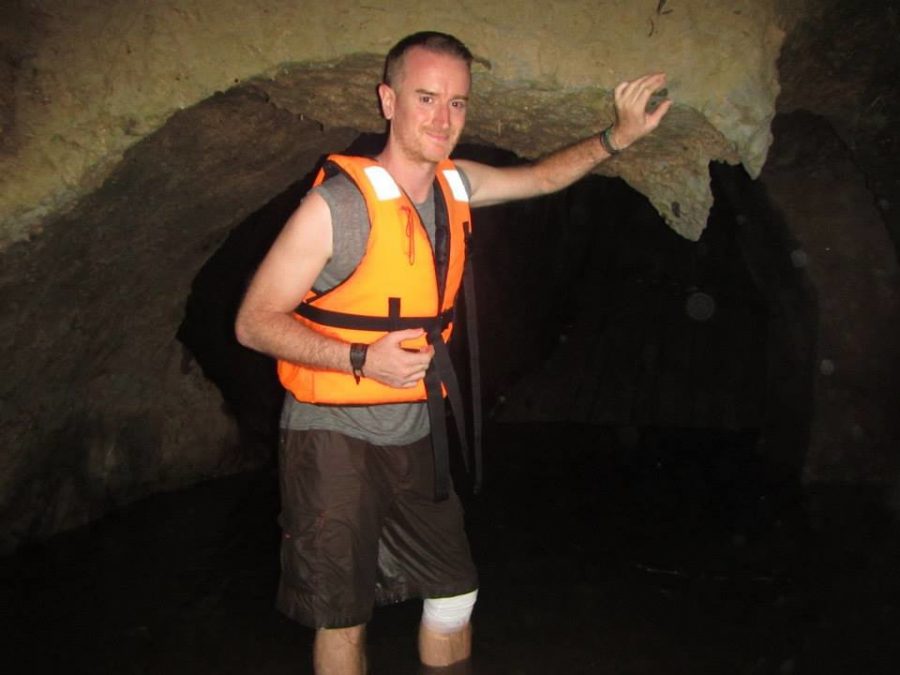 Disclosure: Airfare, accommodation, and guides were graciously provided to me by the Sarawak Tourism Board. These guys really want to show off their magical part of this world and I certainly can’t blame them.

Previous Post: Disney World: The American Dream
Next Up: Backpacking Travel in Laos