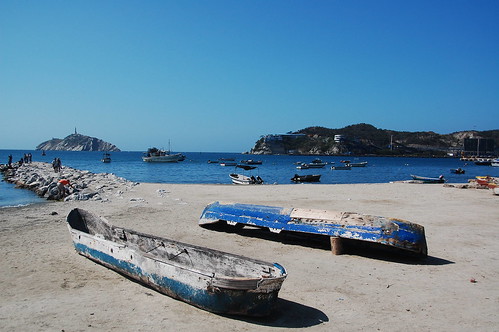 I had the eerie feeling that I was being watched.

As I dug through my pocket for enough pesos to make the taxi driver happy, I was vaguely aware that there were people watching me from every shuttered window and from behind the black-iron security bars of every hidden doorway.

It was 2 a.m. and I had just arrived in Santa Marta on the north coast of Colombia — what was supposed to be the grand Caribbean finale to my seven-week trip. For hours on the endless buses, Alex and I had talked dreamily of the beach bungalows, white sand, and sapphire water that were surely waiting to reward us for all the thousands of kilometers covered.

Instead of rum and booty shaking, we were greeted with graffiti and barbed wire.

At first glance, the place I had been deposited didn’t look much like paradise. The DMZ between gang territories would be a better way to describe it. Rubbish had piled up ankle deep on the abandoned street where my hostel was supposed to be. There wasn’t a soul in sight.

This was probably one of the most dodgey places I have been so far. Even war-torn East Timor has nothing on this place! The taxi driver wasted no time in speeding off to leave us gringos standing with juicy bags full of expensive cameras. With no map, plan, or machine gun, it felt pretty exposed to say the least.

Suddenly an American voice called out from across the street behind a set of metal bars:

“You shouldn’t be out on this street…unless you’re armed!”

The sign above him read “American Institute of Business” — meaning that he was an expat living here and probably knew his own neighborhood quite well.

Lucky for us, the sleeping hostel owner opened the double-gate bars to let us inside the dark — and seemingly abandoned — hostel. He turned lights on as we walked inside, literally crunching over leaves collected in the hallway. The place had been empty for a long time.

After busing back across the full length of Peru, Ecuador, and part of Colombia at a pace which would make the most seasoned of chicken-bus riders crack, this wasn’t quite the welcome we had expected!

I dropped my bags and was desperate enough to brave the streets long enough to go buy some water. The sleepy-eyed hostel keeper indicated where it was and told me in a whisper rapido! I made my way a couple of blocks past the cat calls of prostitutes and groups of young men milling around on the main street shouting things at me in Spanish. There were people face down, passed out in heaps of trash piled along the street. Still, midst all the chaos and stench, I could just smell a hint of salty sea spray coming from a block over. I was close.

After grabbing the water and quickstepping back to the hostel with a literal gang of guys walking behind me calling out offers to buy cocaine, I arrived back at the hostel with the owner already standing on the other side of the bars which were locked with a giant padlock. He hadn’t felt safe enough to leave the gate unlocked just for the five minutes that I was gone!

Even still, when the road throws you lemons, you throw them back at the harlot. I made up my mind to get out of town early the next day and head along the coast looking for paradise. With Jamaica just a short hop across the water, it had to be here somewhere.

Lao Tzu said: A man with no expectations is never disappointed.

.
Previous Post: The Nazca Lines of Peru
Next Up: Taganga, Colombia: Paradise?