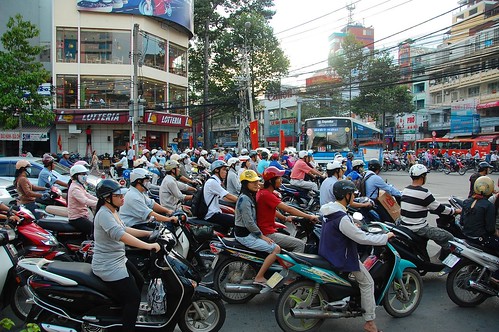 No…these aren’t the steps for a successful cliff dive. This is the sequence for something far more daunting and dangerous: crossing the street in Saigon, Vietnam.

I repeated this near-death ritual several times a day in Saigon, even keeping count of how many successful crossings that I had made for a while. After a few days in Vietnam’s biggest city, crossing the road has become second nature; I have even started looking forward to the thrill of walking in the road.

The noise and smell of sputtering motorbikes are synonymous with travel in Southeast Asia. However, Saigon caught me off guard. A literal endless sea of motorbikes fill the roads at all times. Forget darting quickly through a gap in the traffic; all darters eventually end up as road kill. There are no gaps in traffic — probably because people ignore the few remaining traffic signals that still work. To get across, you simply step into the traffic, raise your hands, and part the sea Mosses-style as people swerve and bump legs to go around you.

Note: This technique doesn’t work for buses — they do not swerve!

After two uneventful weeks of catching up on work in Chiang Mai, Thailand, I decided that it was time to shake things up a bit; I booked a flight to Vietnam.

A few hours in the air and I found myself staring at a border agent in the Ho Chi Minh City airport, visa paperwork in hand. Although the visa rules for Vietnam seem strict at first glance, if you have the dough they have the stamp. I was a little apprehensive about handing over my American passport at first. The grumpy, mask-wearing agent eyeballed me once, chose a couple stamps from the array scattered on her desk, and pounded my passport with 30 glorious days of access to Vietnam. No questions asked.

I walked out of the airport into my 24th (I think) new country and what is my third visit to a communist country. Like the other commie countries, I never had a single question or problem at the border. Forget Cold War stereotypes: I never saw as much as someone armed with a BB gun in the airport. I see far more machine guns — and get way more hassle — in Atlanta Airport when I try to come back to my own home country!

Although locals still use the old name, Saigon is now officially known as Ho Chi Minh City. Call me old-school or politically incorrect, but I still say “Saigon” as well. Ho Chi Minh was a murderous madman much in the way of Pol Pot or Chairman Mao — the less his name is said, the better. The same applies to still calling Myanmar “Burma.” 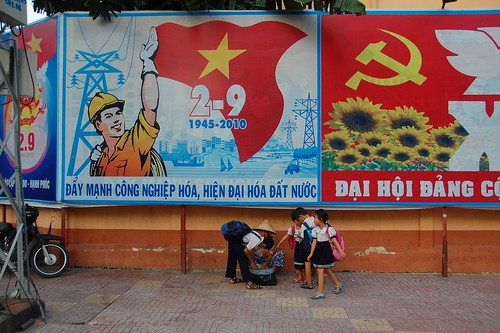 All lack of machine guns aside, I have entered Vietnam during an extremely communistic time. The city is practically bleeding with red hammer-and-sickle banners and loads of propaganda. This month marks the 1000th anniversary of Hanoi in the north, as well as the official celebration of Ho Chi Minh’s birthday. While not as big as in the north, there is to be a giant festival here with music, huge street stage, and fun for all. Large billboards and red posters depicting workers standing alongside soldiers, fists raised in the air, accent every building and intersection.

Much the same as when I entered Brunei earlier this year, I have come to Vietnam ice cold. I know very little about the currency, not a word of the language, and very little about the food or culture. I first realized this lack of preparation when I heard my landing gear squeak down on the runway and my arm hair stood up. As with every new country, the adrenaline had me buzzing all the way out the airport doors.

So far, Saigon has been amiable to me. The hassle levels — as expected — are far higher here than in Thailand or Malaysia. I am viewed as a celebrity cash machine when walking out on the street. Forget finding peace when you eat; beggars even enter restaurants trying to sell gum or fake Lonely Planets. I think everyone that owns a motorbike — around 9 million here in Saigon — has offered to rent it to me for the day. Despite the constant shaking of my head “no,” Saigon has a maddening vibe that would probably grow on me like a fungus if I allowed it to do so. Hell, I didn’t like Bangkok the first time either.

For the next 30 days — not nearly long enough — my mission is to get a proper taste of Vietnam…at least the South anyway.

Now, on to get my first steaming bowl of real pho – that alone makes the flight here worthwhile. 🙂

I will leave you with an interesting sight: people here seem to have an obsession with getting lice out of each other’s hair on the street. 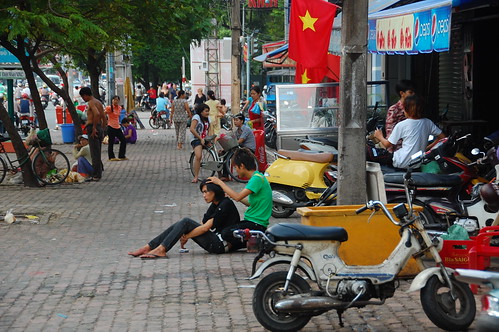 .
Previous Post: Ayutthaya and the Missing Buddha Heads
Next Up: Vietnam in a Nutshell: Vagabonding Summary