Running of the Bulls in Pamplona 2015 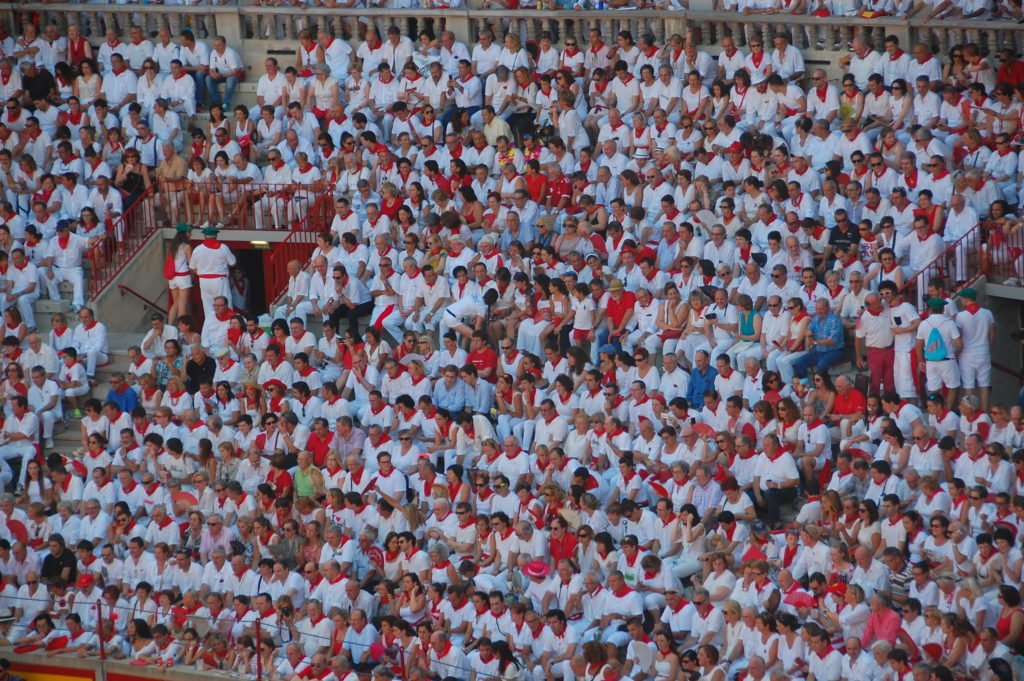 Part 1: If you haven’t read it, here’s what happens when getting ready to run with the bulls in Pamplona.

It was a relief when the police finally released us from the miserable holding pen.

As I walked around Dead Man’s Corner to choose my starting place to run with the bulls in Pamplona, the visual caused me to hesitate and gasp. Thousands upon thousands of people were waving red kerchiefs from balconies along both sides of the street. They leaned and gawked, hungry for a bird’s eye view of whatever carnage would shortly ensue beneath them.

I swelled with pride, but also a very solid dose of fear. There was a sense that I was about to do something big. And slightly dangerous. My hands were sweating. Joints were stiff from waiting around so long. Meanwhile, scores of eyeballs molested us from above, scrutinizing our every facial expression.

I did my best to feign nonchalant calmness, but a little stumble on a brick betrayed my wobbly legs. The street was very uneven. Soon, it would be the undoing for many runners.

Television cameras rolled as we crept forward slowly, tentatively shopping around for the best place to test fate on Estafeta Street. All of us were keenly aware that the timer was ticking.

A Running With the Bulls Lesson

I accidentally walked too far forward, saw the crowd amassed around the Plaza de Toros at the end, and had to turn around. Every step back toward the starting line I took, I knew I would have to make up — surely under duress. I backtracked around 200 meters and posted myself within proximity of the left wall halfway down the street.

That moment would stick with me for years afterward. It was a moment of truth, a gut check involving personal integrity. Many of the runners were literally planning to begin at the end of the course, running 20 meters or so into the plaza, entering as heroes, then bragging about running with the bulls for the rest of their lives.

Would they even see a bull? I wanted to do this right. And I surely didn’t want to have to get up the next morning to try again.

I chose my spot and began trying to calm my mind. 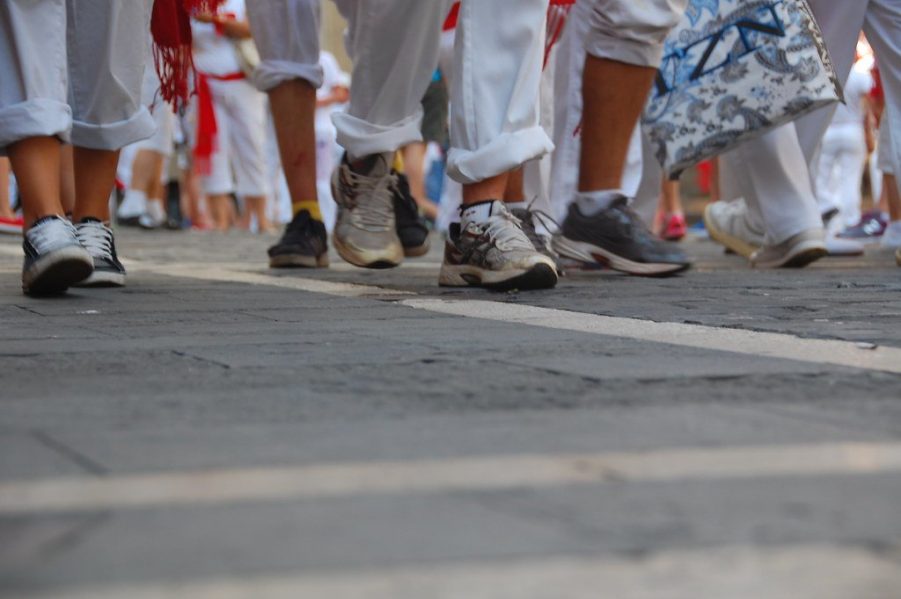 Minutes Before the Bull Run

Waiting, we jumped up and down in place; faces to where the bulls would be released. The next five minutes went like this: Check shoelaces. Stretch. Jump to see over the crowd. Look at the faces around you. Jump some more. Try to loosen stiff joints from all the waiting. Check laces again.

We went through this routine under the gaze of thousands — millions — considering that the run is televised worldwide. I was just about to check my laces for the fifth time when a single rocket popped in the distance, signaling that the gate had been opened. Somewhere out of sight, the bulls were now exiting their holding stall.

Knowing that the bulls were on the street but still out of view is a feeling I’ll never be able to describe.

A cheer erupted from the crowd. Runners shifted uneasily in place and jumped more than ever. Everyone looking over the next person for a flash of black or brown, anything to know when the tons of hooved hell would be tearing down the street in our direction. A few runners lost their cool and began to run prematurely. They ran past me while looking over their shoulders.

My hands were cold and shaking. Heart pounding. Ears ringing with blood pressure and adrenaline. A second rocket sounded, signaling that all the bulls were now on the run.

They were coming. And with doors closed up on both sides of the street, there was no place to go.

The Running of the Bulls Begins 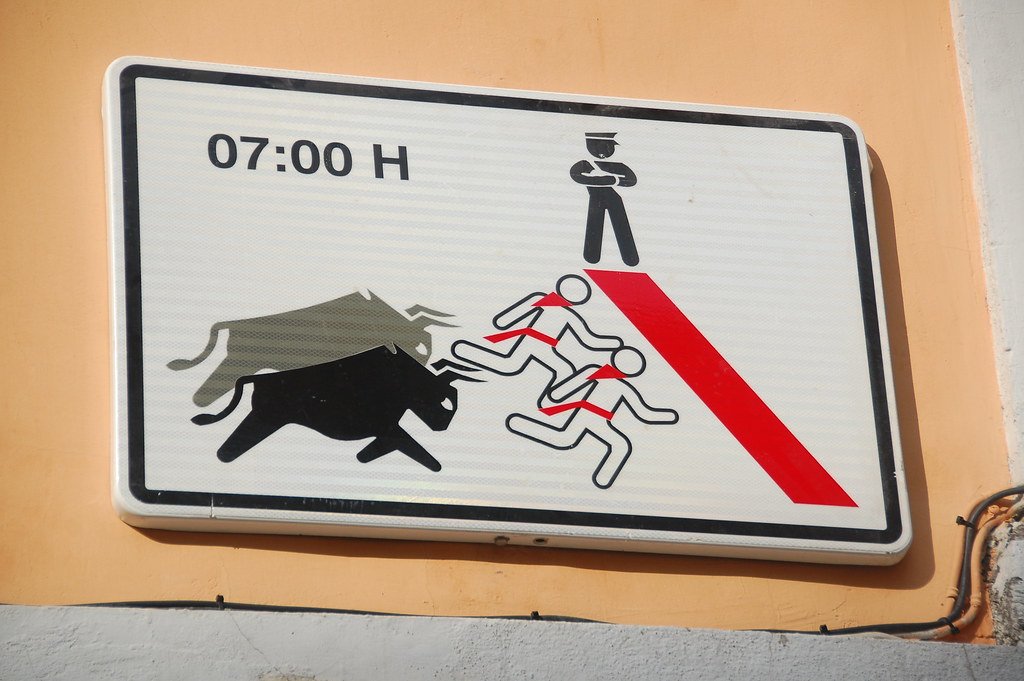 About half the runners started forward in panic. I waited, trying to determine when the others would begin moving. Wait…wait…a third rocket sounded. Wait…just when my nerves couldn’t bear anymore, mind screaming “survive you fool!” I saw a wave of runners down the street from my position turn, their faces deathmasks of fear and adrenaline. Someone beside me shouted “Go! Go!” I didn’t hesitate, only turned on my toes and began a mad dash pushing forward through the throng.

The noise was deafening. Both runners and spectators shouted at full volume.

I was engulfed and overtaken by a wave of humans within seconds, all sentient beings overwhelmed with a sense of self preservation. There was very little camaraderie and absolutely no bravado. I ran with my hand on the guy’s back in front of me; someone else had their hand on my back. We were such a tight cluster that one trip, one fateful misstep, would throw the whole works into a messy, life-altering disaster. The cobblestone street was uneven; a wide stride was impossible with so many feet and legs nearby. We shuffled for survival. I slowly became aware that I was shouting “Runnnn!” at the top of my lungs — I was also in full panic. 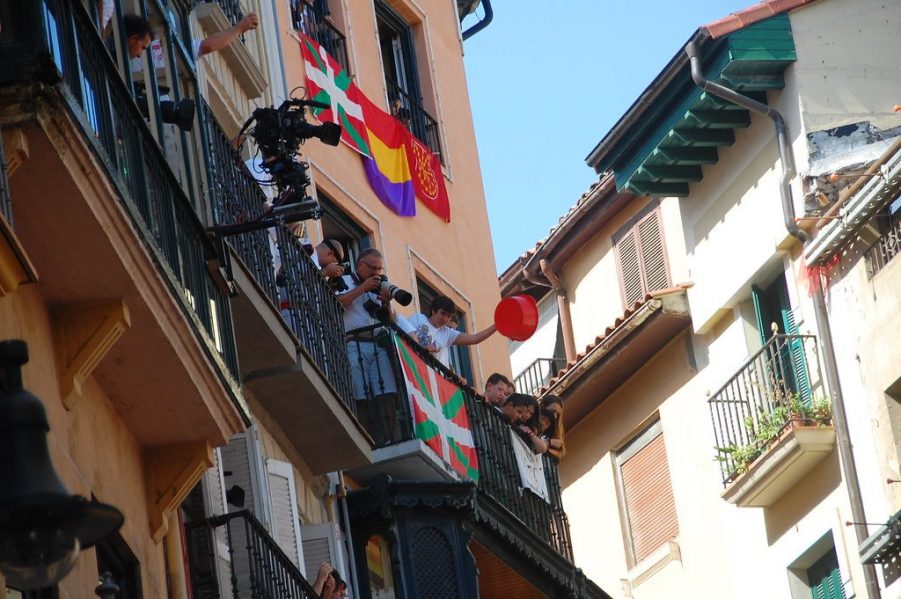 Then the inevitable happened. People began to tumble and fall. I could hear their cries. I jumped the legs of a guy who was already down, balled up into fetal position with his head covered by hands. My fleeting thought was that he couldn’t of possibly have been a first-timer. He was doing exactly what you’re supposed to do if you go down. Trying to get up would be a big mistake. I wondered for a split second if he was one of the nice guys I had been talking to at the starting line just a few minutes earlier. It was only later that I found out he was horribly trampled, despite staying calm and doing the right thing.

I’m embarrassed to admit that I was so concerned with running and not falling that I had no situational awareness. It was only when someone slammed me hard to the left that I saw the first flash of black and brown directly to my right. I heard the thunder of hooves and the deep pants of bovine breath filling giant lungs. I saw the horns. I could have touched the bastards as they rocked past me in a vortex of fear and fallen runners. They were right beside me. My entire body braced for pain. I expected to go down at any second, and my only prayer was that the runners wouldn’t step on my back to further damage the injured disk in my back.

Below is a video (not mine, obviously) from my run with the bulls. I’m somewhere on the left side of the street after the turn at 0:44.

Running With the Bulls Is Messy Business

Watching videos later, I learned that the bulls had swung wide around Dead Man’s Corner and had come up the left side of the street, my side, compressing us runners into a dangerous clog. Runners jostled and pushed for a position closer to the left wall, so when I saw the rump of the last steer pass, I moved more toward the center of the street where there was room. I never found a place to stop along the wall as you see many runners in the video doing.

Fortunately, I wasn’t in the way when one of the two bulls that had become separated from the pack came unexpectedly tearing up the middle seconds later and gored a guy from Chicago (the video can be seen here).

I broke into a full run up the middle of the street, gasping for air, past television crews and a crowd gathered at the entrance of the Plaza de Toros. I saw the two red doors still wide open — the objective is to get inside before they close the doors after the last bull. I thought for a quick second that, if the doors were still open, there must be at least one bull still to my rear. I felt a real sense of fear from the unseen threat. With a final burst of energy, I ran into the bullring and stopped dead in my tracks, heaving for air. 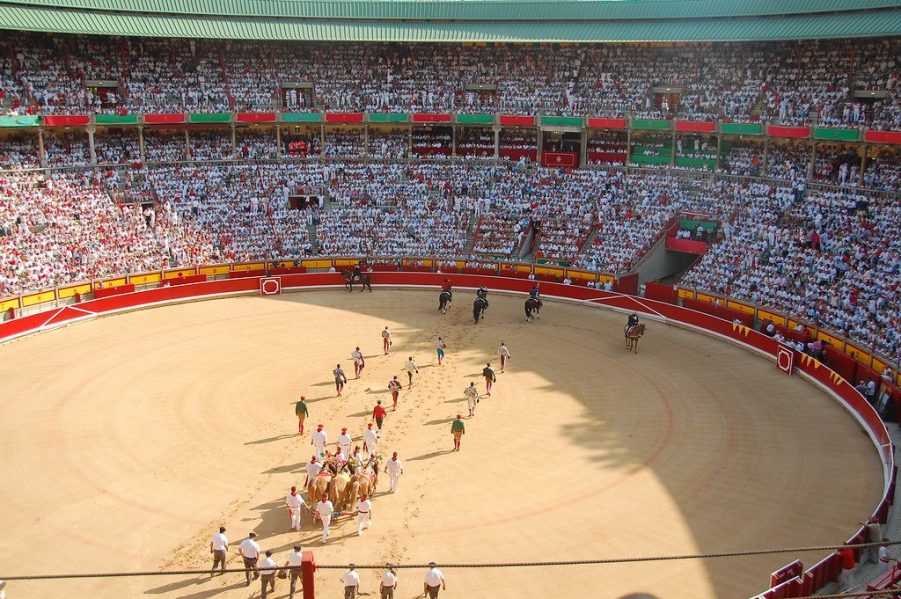 I’ve never seen anything like it: 20,000 spectators in the stands, all clad in white and red, cheered from above me. The sight was surreal. With the roar and thumping of my own heartbeat in my ears, I couldn’t hear what the other runners were saying to each other. I was close to passing out.

More runners poured into the arena, so I was pushed to the center. I found my Irish friend; his eyes were wide and full of madness. We high-fived and gasped for air for a precious minute. I’ve felt adrenaline a time or two in the past, but this time my body was pushed beyond capacity — shaken. It was wracked with bitter cortisol and buzzing with sweet survival. My face was literally twitching involuntarily, and my hands wouldn’t stop trembling. The surge made me high as hell, as if I were levitating. My knees struggled not to buckle beneath me.

Unexpectedly, an impact knocked the wind out of me.

I didn’t know what had happened when I was knocked to the ground. Once again, the runners were in a full panic and scrambling for the safety of the fences. The late bull had entered the plaza unexpectedly at full speed, and it wasn’t happy.

I got up and was slammed again into the wooden railing by a rioting mass. A surge of bodies pressed me against the fencing. [ I would find out weeks later that the pop against the railing actually cracked a rib! ] The bull made a complete circle of the bullring at full gallop and lowered its head, looking for a fight.

Maybe because we were all caught so off guard. I’m sure the scene did look humorous from above. But raising yourself up from the soft dirt of a bullring just in time to see an angry bull thunder past is hardly a laughing matter. I fought for position along the wall, but there was a real risk of being crushed by other people trying to get over.

I stood there just 10 minutes before deciding that I had played enough games with fate. The adrenaline and fear of becoming a late casualty left me exhausted. I wasn’t thinking clearly anymore. It was time to go over the wall. I clumsily climbed the fence with wobbly legs to the safety of the other side, then took a position to watch the runners who were still brave or stupid enough to play with the bulls.

After Running With the Bulls

Later, at a bar just outside the plaza, I met a guy who had been partially scalped by a bull in the bullring. I still don’t understand how it happened, and neither did he. A chunk of his scalp had been removed in the front somehow. We laughed about the injury; his hairline had been crudely modified for life (photo near the bottom here on this excellent San Fermin post). Like most of us runners, his hands were shaking as he held his well-earned beer at 10 a.m. and discussed the new scar.

When I exited the plaza past security into Pamplona’s bright daylight, I held my head up high. I was tired, sore, and stained — but buzzing with life. Alive. Later, I would once again be just another festival goer lost in a sea of red-and-white participants. But for now, I was one of the proud few to have ran that morning, a corredor con los toros. 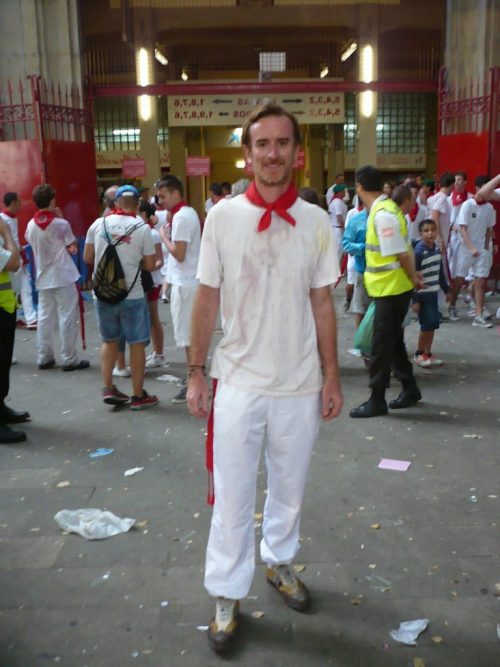 Previous Post: Getting Ready to Run With the Bulls in Pamplona
Next Up: Down and Out in Spain