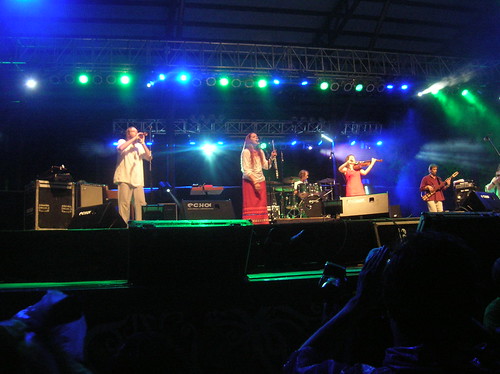 Thousands of strangers, dancing knee-deep in the mud under the close watch of a green mountain covered in clouds. The pouring rain was ruthless, waiting right until the first big act took the main stage at 7 p.m. before unleashing a torrent heavy even for the rainforest.

When the thunder cracked and the rains came, people — the smart ones anyway — ran to the stage rather than for cover. How can you come to something known as a “rainforest music festival” and leave clean and dry?

As I stood directly in front of the stage at Borneo’s Rainforest World Music Festival, I couldn’t help but grin as the rain dripped off my nose. Much classier than a Full Moon party — but every bit as fun — this was certainly the best music festival I have ever stumbled upon while traveling. 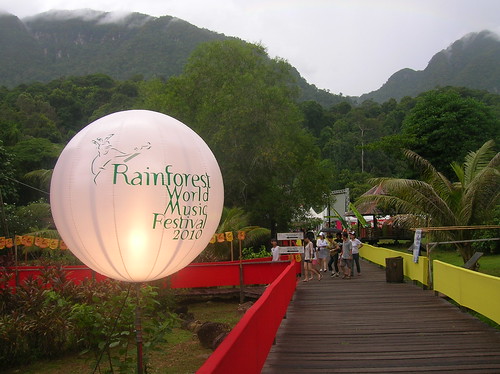 Bands from all over the world: Russia, India, Malaysia, and Africa played traditional-but-upbeat music. I probably couldn’t have pronounced half the names of the instruments, but I certainly danced to all of them. The highlight of the festival had to be the closing act, a Colombian reggae band with contagious energy that had everyone dancing, rolling, and playing in the sticky mud.

I danced so much my legs were sore and at some point around midnight I realized that the grassy field in front of the main stage had actually turned into a shallow lake. I actually felt a little bad for the folks attending the festival tomorrow who had to start out in the muck rather than help create it.

Disappointingly, there were no real crafts or handmade jewelry for sale at the festival; it was all the same Chinese-made stuff available for half the price in the shops. I’m still on a quest to replace my lost charms from Indonesia with something meaningful. Just like a good book, I suppose the right piece will come to me when it is supposed to.

On a positive note, I wore my Shaolin Temple kung fu shirt I got when studying Shaolin in China in 2007. I thought nothing of the Chinese characters on the shirt until several Chinese guys came up to me throughout the night and asked to have their pictures taken with me — all of us giving a thumbs up. They were all blown away by meeting a white guy who had trained in China. Although I was hardly representing myself well for photographs, it was a very proud moment.

True to most festivals, the food was expensive and total rubbish. I had only one thing on my mind for the 45-minute bus ride home.

I dragged back into Kuching around 2 a.m. looking like some kind of deranged swamp monster, leaving a trail of mud and slime everywhere I went. I stumbled into a 24-hour McDonalds (it sounded like a good idea at the time) and despite the stares from the staff, croaked my order across the counter. My wet money stuck to the counter, but I was “rewarded” with two hamburgers. Like a good American, I have officially eaten my quota of McDonalds’ rubbish for the time being.

My clothes are permanently stained brown and I’m still finding mud in orifices, but wow what a night to remember! 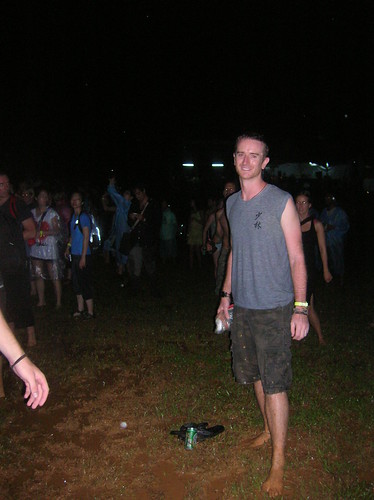