Prison Break – Going Over the Wall 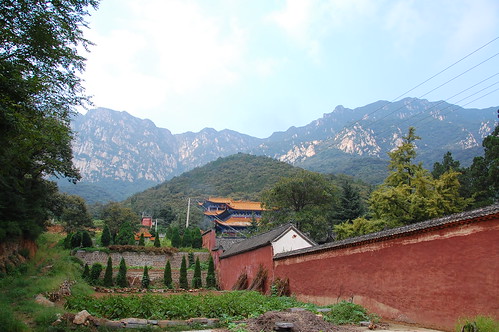 There has been a breakout.

I knew that something was up when for no explainable reason, training on Friday turned soft. Our morning run was more or less a glorified shuffle and forms training was shortened so that we could “go clean our rooms”– sifu talk for “go hide.”

The promised room inspections never came (good thing because mine smells like wet dog). My spidersense had the hairs standing up on the back of my neck when our training day Saturday turned into a “field trip” up the nearby TaiShi Mountain. Sure, it was still more than a 12-kilometer uphill walk, but we were allowed to bring cameras, guitars, food, and smiles. The weather was perfect, almost too hot really, and I got a little sunburn. No complaints here though, it beats the hell out of sweating away in the training yard with everyone else.

Then in formation on Saturday night, all of my fears were realized. They had been soft on us the last few days because they were prepping us for a nasty blow. Our sifu stood in front of our group and told us that no one would be allowed to sign out on Sunday, our usual day off. Suddenly, the smiles and giggles from the trip earlier stopped as we let the news sink in. The tactic worked, and we retired to our rooms with only murmured resistance. The explanation given was that there was a serious virus going around town and they did not want it to get into the school. One look at the mess hall and the smell as you walk in the door should be an indication that all evil viruses probably start here. They say that the flu starts in China every year as a new mutation and then spreads around the world, arriving in the West around the time of our usual flu season in November and December.

I believe viruses are born in the filth of my kung fu school.

Put 4,000 Chinese kids into one place, don’t give them a way to properly wash their hands (no soap) or teach them any ethics (it is perfectly acceptable to pull your pants down and piss on the wall in the yard) and imagine what happens.

Was there really a bird flu epidemic popping up outside the safe confines of our school? The internet is not a reliable source of info because of the censorship, so a few people began calling home. The Sanda (Shaolin boxing) team here decided to take matters into their own hands and went over the wall on Saturday night. They made it to ZhengZhou, had a much needed night of partying, and did not return until Sunday afternoon. They were promptly met with a welcome party of sifus ready to kick ass and spent three hours in our small common room being yelled at. We watched in hysterics as the sifus actually STRETCHED OUT just outside the door before going in to yell at them…! It may have raised a lot of trouble, but if you ask any single one of the escapees, they will tell you that going over the wall was worth it.

The price of freedom.

Like I said before, we are all here because we want to be, but to reduce our simple human freedoms while at the same time, enforcing such a rigid routine, is very prison-like. Many of the students are backpackers and many are going to crack, I have a feeling. Things are going to get ugly. Hell, I might be one.

When Sunday came around, I made an escape of my own, but directly out the front gate. With some fast talking, a sifu from another group signed off for me to go to the internet cafe and park. Woohoo! Not exactly a party, but at this point, I will take what I can get.

Hard training, I can digest, but loss of personal freedom I cannot. Amanda warned me that authority here will lie directly to your face, and now I have seen it many times. I’m not worried though. Now that I know the rules, I can play just as well.

.
Previous Post: An Update from the Inside
Next Up: Dont Be Afraid of the Pain