The mirror from a speeding motorbike left a red mark on my right arm. I saw the driver nonchalantly bend it back into position to ready for impact with the next pedestrian.

I focused my attention back to the Lonely Planet map I had cut out of the monstrous, five-pound tome on India. The map was wrong; my guesthouse wasn’t where it should have been in the maze of dirty alleys, rooftops, and passageways.

Stopping to study the map was my first mistake in Paharganj, New Delhi. Everyone knows you shouldn’t stop moving on the street. Never stop moving!

I had slowed down just enough to allow the begging women, limp kids in their arms, to grab onto me. Merchants and hustlers, all of which knew I was a newbie because of the airline luggage tag waving from my backpack, smelled fresh meat and moved in for the opportunity.

I had already heard horror stories of how the kids are borrowed, rented, and even drugged to appear weak and lifeless so tourists fork over money. Strong drugs would be the only way they could have remained so lifeless in the chaos of Paharganj. Supporting this nefarious industry is a bad idea. Don’t do it.

I slipped between the beggers as they argued over who got to rip me off first, nearly stepping into a fresh pile of steaming crap from a stray cow. The revered animal that produced the green obstacle stood motionless, staring at me and chewing indignantly. We met gazes for a brief moment; it was completely unaffected by the insanity swirling around me.

I turned around to bust three dirty little boys throwing rocks at me, full force, from a nearby rooftop. The little monsters were pelting the back of my legs with stones, then hiding behind cover. I did my best to use my backpack as a shield, then jumped back into the endless stream of honking traffic to lose them. The noise was deafening.

I was told over and over that India would be an assault on my senses, but I had no idea Paharganj in New Delhi would be a literal assault on my body — well at least until I ate something that I wasn’t supposed to. 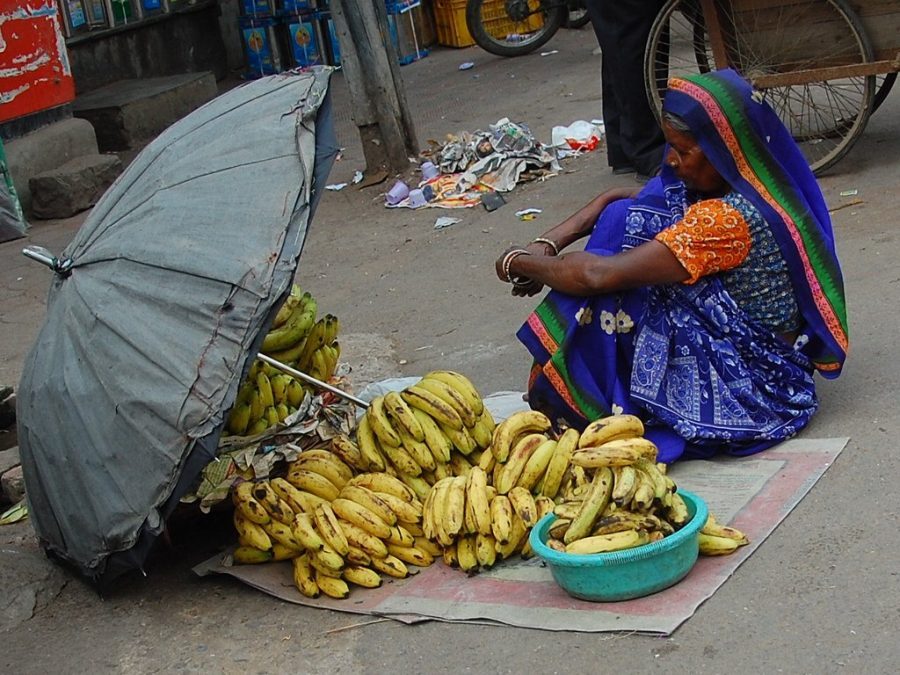 “Assault on the senses” is often used to describe India to the uninitiated, but it’s far too weak of an expression. Onslaught or complete devastation of the senses would barely do more justice. Think: all out nuclear war!

I could say that my welcome to India was a rocky one, but that wouldn’t be fair. India is a massive subcontinent, and so far all I had seen was Paharganj — a small, dirty slum in New Delhi that is now the backpacker district. Call it their answer to Khao San Road in Bangkok, a place I also hated at first but eventually learned to love.

Paharganj is so chaotic, otherworldly, and downright miserable that it’s also laughable. Who would have thought that dumping a bunch of lost, newbie backpackers with pockets full of travel funds into a hellhole of a slum in New Delhi would be a good idea? Was it some sort of cruel, twisted joke?

Still, I wasn’t a victim. I chose to begin my time in India here, mainly because it was touted as the best place for budget travelers.

There was a pretty good idea in my head that I would get my butt kicked in India for the first few days. I was 100 percent right. A place like this has a steep learning curve, even for experienced vagabonds.

Even still, I remember that I thought the same about Bangkok at one time, as well as remote parts of Indonesia, Beijing, Egypt, and lots of other places where people stare at you. Now those places don’t phase me.

A woman dumped a bucket of some horror from a second-story window onto the busy street below. She ducked inside to avoid the angry shouts from people she splashed with her filth.

The cacophony of horns continued to blast all sense of direction right out of my tired brain. I was lost.

My rucksack suddenly became heavier. In my peripheral I could only see a thin, dirty arm holding onto it, and me.

My Guesthouse in Paharganj, New Delhi

I finally found my guesthouse and regrouped up on the rooftop, sweat making brown streams out of the dust on my face. Paharganj is full of rooftop restaurants and cafes where travelers hide in the shadows to watch the madness below. They’re our sanctuary.

Rooftops are the only safe haven because you sure as hell won’t survive sitting or standing on the street for long!

I didn’t expect much from my guesthouse, just a sanctuary and a place to sleep and shower. It served it’s purpose, but unfortunately, like everyone else in Paharganj, the owner tried to rip me off.

I made the newbie mistake of paying for several nights without demanding a receipt. The next day, a different guy was working at reception. They claimed I never paid. Now, I was faced with two options: pay again or insinuate the staff member — a man with a key and access to my room and laptop — was a thief and a liar.

Always get a receipt.

The few travelers that I encountered, the people I was hoping would show me the ropes for India, were largely useless as well. Most were newbies and just as freaked out as I was — experienced travelers know not to stay in Paharganj.

I saw numerous women travelers literally run in off of the street, stressed expressions on their faces, and go straight to their rooms. The few I met told me how many times their breasts were grabbed by oily-handed men on their way home.

I sure didn’t expect Thailand’s Khao San Road backpacker scene when I arrived, but I highly suggest staying somewhere else in New Delhi when you visit. Stay anywhere but here.

Paharganj is a place where threadbare dreams come to be crushed into the dust by rattling rickshaws.

In fact, the only time I saw someone smile in Paharganj was when they were taking money from someone else’s hand. Money seems to be the universal hope for everyone, the substance that can deliver them from their dusty, horn-blasting misery.

Extreme poverty makes people desperate, and Paharganj is a place of poverty. Residents enter a survival mode where they no longer care about anything other than money. This causes them to do things like dump buckets of mop water onto pedestrians two stories beneath them.

I believe Paharganj in New Delhi is the culmination of bad karma, a place where humans have quit caring and created a living hell. Again, they are desperate.

For instance, show owners and vendors refill bottles with tap water — you have to check the seals. Then you have to stand your ground and vehemently argue for another bottle. They are willing to poison fellow human beings with parasites to get 15 cents closer to escaping this place.

Every travel writer is guilty at some point of spinning a miserable place into a positive light. I decided to sum up my feelings about backpacking in Paharganj with this potential marketing campaign.

Here’s how the India Tourism Board could promote Paharganj as the next big honeymoon destination. This should also confuse the hell out of Google’s ranking algorithm. 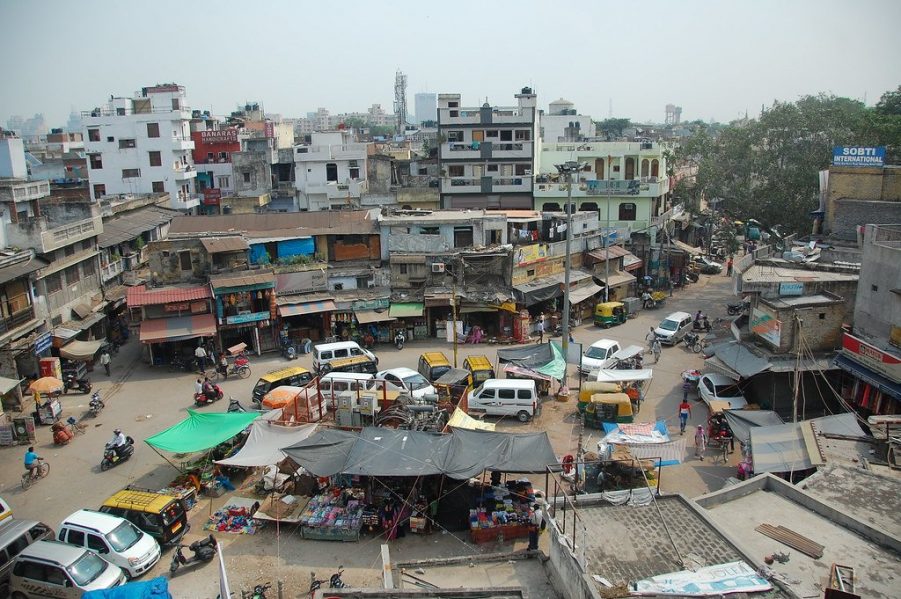 Want something different for you and your new wife? Looking for new food and an unforgettable experience? Well, forget quiet islands and sunny beaches, we’ve got it all!

OK, enough of that…

Now that I’ve thoroughly talked you into a honeymoon in Paharganj, here’s the bigger picture:

Don’t think for a minute that I considered Paharganj the best that India could offer.

Much of the world’s amazing secrets and philosophies originated in India then crossed the Himalayas into China, including the Shaolin, energy studies, and kung fu that I have trained for decades. Despite the deterioration of humanity that I encountered in Paharganj, this subcontinent is magical.

And despite having only three months to sample India, I’m going to find some magic. I booked a nightbus north to the green foothills and snowy mountains of the Himalayas where levitating gurus and masters still hide and the 14th Dalai Lama resides.

After years of waiting to see India, I have arrived. Unfortunately, in Paharganj.

Previous Post: One Too Many Flights to Kuala Lumpur
Next Up: Seeing the 14th Dalai Lama in McLeod Ganj