What Is OBX? The Outer Banks in North Carolina 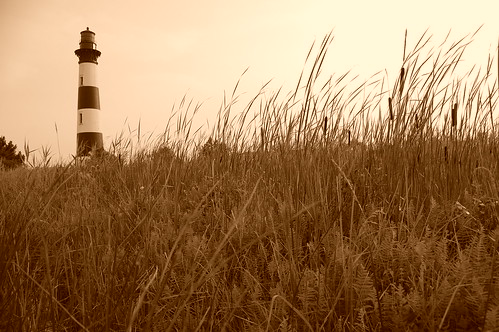 I used to wonder what is OBX after seeing the stickers on cars around town. Now I know: It’s the Outer Banks, North Carolina!

Rather than beat you down with a chronological account of vacation, I’ll just share some nifty pics and highlights from our recent trip to the Outer Banks, North Carolina.

The tiny strip of islands off the coast of North Carolina was about what I expected. Suburbia families from DC and the northeast piled out of SUVs, baked to a lobster red around pools, and argued over which miniature golf place to go next.

I guess I was mostly expecting a scene similar to Hilton Head: vacationers, golfers, and a few crusty kite surfers and expats meeting nightly in a dive bar — which inevitably I always find — with a guitarist playing Brown Eyed Girl for the 1,000th time. Instead, what I found were totally abandoned beaches after dinner time. Not even the odd campfire or beach party was to be seen for miles up the coast.

Good for the nesting sea turtles, bad for a guy wanting to meet people. 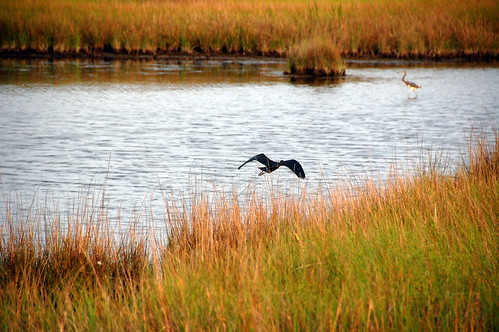 Instead, weary parents corralled their sunburned kids into SUVs with cargo carriers on the roofs and set off to eat dinner at places where waitresses are required to wear flair buttons on their uniforms. Each evening I was pretty much left alone either in the hot tub or with my crabs on the beach.

And big crabs they were! I did manage to catch a few that were dumb enough to hold their ground rather than run like their fellow smarter decapods, but first glance told me that the tiny amount of meat on the claws was hardly worth stinking up the condo to boil them.

My nervous family was much relieved; I guess I have to wait to play survivor man.

All lack of interesting people aside, I did accomplish the primary mission of this trip: to secure some much needed family time before departing for Asia.

We managed to explore a lighthouse, dodge snakes, hike through some wetlands, see Kitty Hawk, learn all about the Wright brothers, and my favorite: walk across some scorching sand dunes very reminiscent of any desert I’ve been in.

I did find a hang gliding place, but after watching a handful of poor souls go running across the sand dunes, jump into the air, then collapse into a crumpled heap, I decided to save my $120. Not to mention that they were attempting their first flights on the hottest day of the year. I’m not sure if they were running to gain lift, or were simply doing their best not to blister their feet in the 130-degree sand. Either way, the 30 feet or so of flight they achieved hardly looked worth the sweat required.

I guess taking flight strapped to a canvas will have to wait. 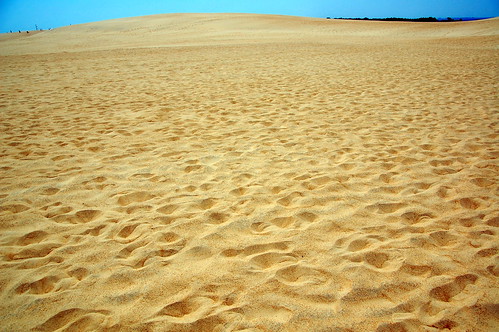 As the hang gliders fell one by one to heat exhaustion and lack of wind, we hiked around the dunes in sand that nearly turned the bottom of my flip-flops into a melted, rubbery goo.

The still-freezing Atlantic Ocean didn’t seem all that bad after a day of waiting for the AC to cool down the inside of a scorching minivan. I did get to see a pod of dolphins swimming in bounds up the coast; I only barely missed being in the water with them after one breathtaking dip to cool down. The ocean was nearly as cold as my shelter during a winter storm on the Appalachian Trail — maybe a degree or two above cardiac arrest.

The highlight? You know you’re getting older when one of the highlights of a trip turns out to be a meal. We ate the mother of all seafood feasts at a dingy-yet-pleasant restaurant on the fishing pier. After encountering some of the marketing hooplah, I expected a touristy experience where a man dressed in a plastic lobster suit may or may not be the greeter. 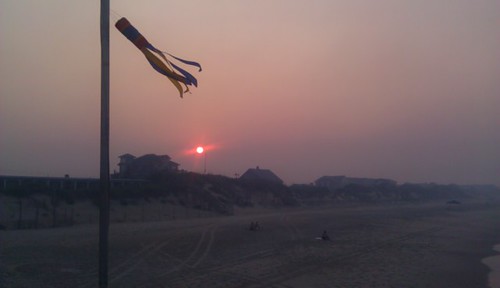 Instead, the front of the restaurant was a smelly bait shop, where a crusty-but-friendly old fishermen — who should have been missing a hand or an eye but wasn’t — answered a few questions for us.

The seats were rough, wooden tables on the pier with a view (and smell) of where food really comes from. No, kids, not Wal-Mart or the Captain D’s fish-producing robot — we were watching people catch dinner.

Fist-sized scallops, oysters, sea trout, and gigantic shrimp were arranged with love on the heaviest plate I have ever seen in my life. The birthday feast was placed in front of me and at some point in my fervent gluttony of Omega 3s, gritty oysters, and fish bones, I obtained the buzz that only eating copious amounts of expensive food can achieve; absolute nirvana. No amount of cocaine could accomplish this sort of buzz, but then again, the cocaine probably would have been cheaper. 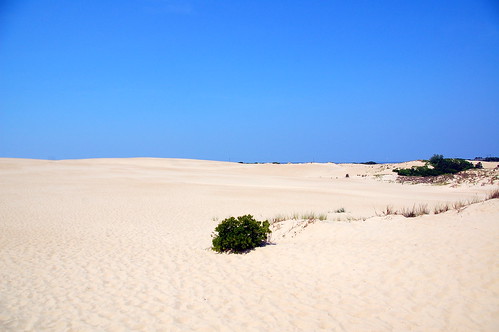 I had to watch my step as I swaggered down the pier after dinner to watch people fish; I was as drunk as some of the unsuccessful fishermen out there. My heart struggled to squeeze viscous fish oil through my veins rather than the usual blood.

Not that there was any doubt to begin with, but this seafood feast confirmed the notion that I MUST live by the sea and eat fish daily — preferably fish that I spear myself. Let it squirm, wiggle, ink, swim, bite, or sit silently on the bottom in a shelled fortress waiting to be pried open; I will kill and happily devour anything that comes from the sea. Yes, I even ate a dolphin once; although, it wasn’t nice tasting or my choice.

So, all in all, the Outer Banks (or OBX as the oval-stickers on the SUVs advertise) wasn’t really all that bad. Getting to see a new place in the U.S. with my hard-working parents is a rare pleasure not to be taken lightly.

Previous Post: Home to Kentucky Again
Next Up: One Long Flight