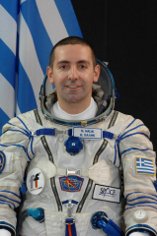 This is part two of my interview with Nik Halik, a vagabonding legend with a very purpose-driven life and an inspiration to many.

If you haven’t yet, go read my Nik Halik interview first for an introduction.

I was able to chat with Nik on the phone for about an hour about his travels to 112 countries as well as some of his adventures like going to space, flying in a Russian fighter jet, and sleeping overnight inside the Great Pyramid.

Nik advocates making a “bucket list” of dreams and adventures that you hope to experience and then causing them to come true by attracting positive things to your life with the right mindset.

No matter how difficult the goals may seem, start by making small systematic steps toward making each dream come true, then move on to the next goal on the list. Nik is mostly finished with the list he made as a kid…imagine the skepticism he met with when he said that he wanted to become a rock star or go to space</em??

Just for fun, here are some highlights from our conversation:

Where are some of the favorite places that you have traveled?

Nik answered that he loves Morocco, the Middle East, and South America because you are “forced to assimilate” yourself.

After traveling so many places, where would you most like to live?

Nik currently has homes all over the world, including Australia, Greece, and the U.S. I asked him where he preferred to live and his answer was that he “still hasn’t found where he wants to live…and would live in space when the option becomes available.”

Since you’ve been a rock star, what are you playing on your iPod right now?

Not surprising, Nik was listening to some hair bands (I like the guy already) as well as Radiohead, Enya, and even Yanni!

Talk about some of the places that you’ve been:

Nik loves Antarctica and has been there five times already. The Titanic (of course) and he was one of a very small handful of people to sleep overnight in the Great Pyramid (inside the sarcophagus, mind you!)

Did you get any sleep inside of the Great Pyramid?

Nik answered, “not much…a little.” He was kept too busy with a strange vision and supernatural experience that changed him.

Do the Russians think you are mad?

He answered, “yes.”  Maybe it has something to do with the fact that he has deep dived to the Titanic with them, trained as a cosmonaut with them, and experienced zero gravity and MACH 3 with them! Why the Russians?  Well, you won’t exactly find the ability to do all those things at Disney World.

In 112 countries, have you ever had any “close calls”?

Nik was nearly kidnapped in Bogota, Colombia, a few years ago and suggested that I “dress like a backpacker” rather than a businessman to not draw attention to myself.  He told me this the week that I was on my way to Bogota…!

What did you think about running with the bulls in Pamplona?

“I ran twice. The first time I fell on my face in about 8 seconds. Try running with the locals who know to start farther down the path rather than where all the tourists begin.”

After getting banged up on the street with some not-so-happy bulls close behind, I applaud him for getting back up and doing it again the next day! The most difficult part…? Surviving the party!

What advice can you give to people in university?

“Travel a couple of years before you jump into the workforce. Get to know yourself first…you will come back far more mature.”

Nik’s book The Thrillionare details some of his adventures (like mountaineering and tornado chasing) and gives a very motivational insight into his way of thinking. I am reading it for the second time and will be writing a review.

Nik recommends that we list our goals and then share them with others to be held accountable. Set specific dates for when you will take that big trip rather than just talking about it, and be sure to do research to help “internalize” that goal.

Previous Post: Interview with Nik Halik
Next Up: Vagabonding in Washington DC