36 Hours on a Bench Seat to Hell 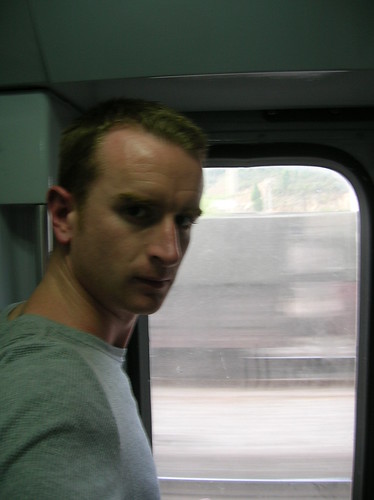 My friend Amanda wrote on her blog that third-class train travel builds character.

If that is true, then I’m going to be canonized one day after this trip.

I walked out of the Beijing train station on Monday with a smile on my face because I had actually managed to book a ticket from start to finish in Chinese. My Mandarin is hit or miss here, depending on the listerner’s dialect, education level, and exposure to foreigners. I know my tones are a disaster. I had much more success speaking Chinese in Beijing than I did in the poor Henan province.

I was smiling, feeling like quite the vagabond…but not for long.

I found my train the following afternoon and prepared for the long journey to Kunming. I purchased a “hard seat” which is the cheapest ticket and is not such a luxurious way to spend a night. The seats lean forward at a slight angle on purpose, which makes it completely impossible to dose off in any position.

The lights are on bright overhead, no dimming allowed. I am convinced that they have an office here for “the People’s Engineering Corp to Ensure Pain for Foreigners” or something like that. I didn’t care; one night and then I would be standing in the warm, balmy south of China where the food is better and the mountains are nearby.

First, I sat on my bench seat with a bunch of very poor laborers who were carrying their belongings in giant rice bags. They were all curiously dressed for National Day in dirty suits. It seems that everyone puts on their best clothes to travel the train. They alternated between laughing at me with gaping teeth and/or pulling my leg hair. Man-fur is a strange thing to the smooth Chinese, I guess.

At first, my patience was holding up, but as then they proceeded to get hammered (drunk) on the cheapest rice whiskey from a plastic sports bottle, they got louder and louder, and it was obvious that I was the focus of most of the laowai jokes. The train was crowded and the aisle was a constant churn of people with needs. One guy needs to get hot water for tea, another goes to the bathroom, another digs something out of his bag overhead for the third time — everyone is coming and going at all times. The attendants are trying to push carts through with food for sale and everyone is shouting and pushing to see what they have. This is no different than a busy intersection in Beijing: complete and steady chaos perfected in a way that only the Chinese can maintain. I am surprised someone didn’t try to bring a bicycle through the madness.

I have been in plenty of situations like this, not a big deal.

I shut my eyes, and went to a semi-happy place with my iPod. When I woke up, I asked the train attendant in my best Chinese when we would arrive in Kunming. He told me “10.” I smiled, not bad — that was only in a few hours. Sure enough, 1 p.m. rolled around and I was starting to think that maybe we got lost. Just two hours delayed or something. Then 10 p.m. rolled around, and I knew he wasn’t talking about 10 p.m. — he was talking about October 10 — a full two days and nights after we had left!!!

My hands were shaking as I flipped through my guidebook and found a rail guide in the back. Sure enough, this was a 3200-kilometer journey. I was practically going to the farthest corner of China that I could by rail…and I was doing it under the worst possible conditions: in third class after a major national holiday. Oops. Maybe I should have looked at my map closer.

I was on a 36-hour train ride in third-class hell and there was no getting off.

For the next 20 hours of my trip, I had the farmers first laying their heads on me to sleep, then putting their feet on my bag, and eventually in my lap. Way more intimate than I had planned for our first date. There was no where to go. I was the only foreigner and there wasn’t an English-speaker on board. I spent a very lonely two nights and one day without croaking a single word. I had brought no food along, so I opted to eat nothing but a bag of oranges and drink water for two days. It was a good detox for my body after the holiday in Beijing! I never even thought of getting hungry — I was usually too stressed.

I am getting used to all of the attention in China, but I was even more of a spectacle than usual. When I opened my bag and pulled a book out to read, there was an audible gasp throughout the cabin and then immediate chatter in Chinese. The same thing happened every time I pulled out my iPod: all eyes were on me at all times. I might as well have had a snake coming out of my nose or something…people acted like they had never seen a book before!

Just when I thought things could not get any worse, a Chinese kid with his crotch hanging out wandered up the aisle. I tried to hide my face so that he would walk on by, but he had his foreigner radar tuned straight to me. He walked up, put some newspapers below himself, and then entered a perfect kung fu ma-bu or ‘horse stance’ and started taking a giant crap. The whole time his brown eyes were locked on mine. Chinese kids do not wear diapers, they have holes cut in their pants which allows them easy access to relief — anytime, anywhere.

Smart, but disgusting. And definitely not what I needed as I was hanging on the frayed ends of my sanity by mere threads. I jumped out of my seat, stepped over his mess, and went to the little area between the train cars where you are not supposed to stand for long. I was half hoping that they would break apart and I would hit the tracks to end this 36 hour nightmare.

I even contemplated jumping from the train.

I hid there for hours. Doing a little dance as the cars swayed and rocked when we went around turns. I put my mind back to nicer places and waited for this hellish train to finish burning up the kilometers.

I really hope Kunming is worth it. I am getting soft like the noodles!

Previous Post: Back to Work (If You Call It That)
Next Up: A Kunming Welcome