The Nazca Lines of Peru 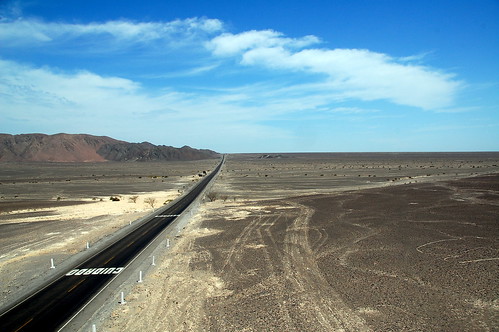 “A man with no expectations is never disappointed.”

I wish I would have kept those words from Lao Tzu in mind when I went slightly out of my way to Nazca, Peru, where some bored Nazca people scratched interesting geoglyphs into the desert outside of town around 200 BC.

With no modern equipment, no GPSs, no airplanes, and no satellites, this amazing tribe managed to…well…scratch a few crappy shallow lines in the sand and call it a day. The lines sound mysteriously fascinating and theories — mostly from people who have never visited the lines — even abound of the pictures of animals, people, and geometric shapes being drawn for the benefit of extraterrestrials to see!

The Nazcas were a charming group who lived even before the Incas and were quite fond of severing each other’s heads — which they carried around as trophies. Apparently, they took time out from a busy schedule of trying to survive in the desert, scaring the crap out of their neighbors, and everyday life to draw some pictures in the hard, red clay of Peru.

The Nazcas were even known to practice trephination which is a fancy way of saying that highly qualified witchdoctors would cut holes into people’s skulls — while they were still awake and conscious — for medicinal or spiritual purposes. I guess it wasn’t a good idea to complain of a headache after a long day of scratching lines out in the heat. 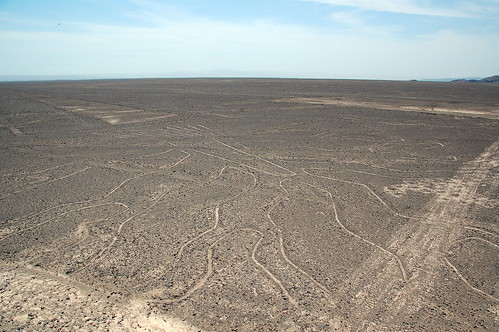 In the town of Nazca, which is actually quite pleasant and touristy, you can book tiny airplanes to fly over the lines. Travelers that had taken the death-wish flights pretty much said the best part of the experience was the crazy flying done by the pilot to entertain them, rather than seeing the lines.

The flights were much more expensive in the off season, so to save money we decided just to catch a bus ride through the desert and hop off once we saw the “Mirador” or tower for viewing the lines. We couldn’t have asked for a clearer, more beautiful day, and the sky was a shade of blue that only the desert can provide.

Maybe I’m being too hard on the Nazca lines. After all, they are quite old. Maybe it’s the fact that they are about the size of the average backyard, not sprawling for kilometers as you would expect. Perhaps it’s the fact that there are four-wheeled ATV tracks criss-crossing over and around the lines in the desert which distract from the archaeological fascination. Hell, what place has a chance of being the follow-up act to the ruins of Machu Picchu? I highly suggest that you visit the Nazca Lines first, on your way to Cusco rather than after.

Maybe it’s the fact that I sacrificed a trip to Ica, where you can hire a sand board and ride down the largest sand dune in the world for a wild shot of adrenaline? Instead, I chose to stand and look at some lines in the sand.

I guess it’s the latter, but after Machu Picchu, I was feeling mature and all grown up in my adventure and was craving some more archaeological treats rather than eating sand and breaking bones trying a sport I’ve never tried. There wasn’t time to do both, so I chose Nazca. Oops.

Luckily, the side adventure wasn’t a total loss. The Nazca Lines are located way outside of town, and after negotiating a local bus heading in that direction, Alex and I were the only people there to climb the rusting tower for an aerial view. The walk afterward made it all worth it. The newly paved road stretched as straight as an arrow to the horizon with nothing but desert and distant mountains on either side.

Walking through the desert with no supplies, 50 KM from town, and the sun burning down on our necks felt like a vagabonding dream. Signs warn that there are still landmines thoughtfully dotted around the rocky fields, so we kept to the road before thumbing a ride with a long-haul bus which was passing in our direction.

The lines might have been a bust, but walking through a heavily mined desert with no plan for transportation home made it all worth it. What a feeling!

I will leave you with a picture of the most bizarre parking space I saw in all of Peru: 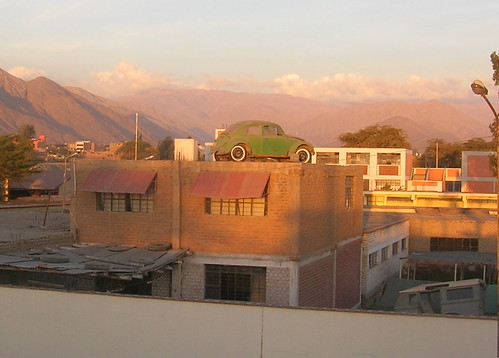