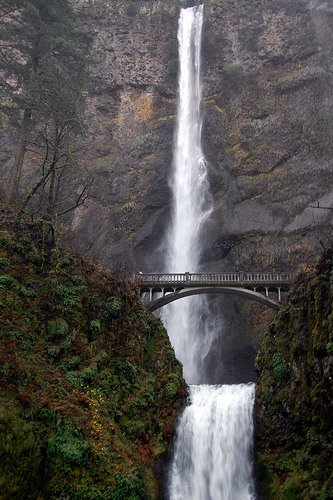 The only thing they like better than waterfalls is taking farang guests to see their waterfalls, which are sometimes no more than a dried-up trickle. When trying to figure out something interesting to do outside of the city today, we both agreed: it seemed like a waterfall kind of day. So off we went to see Multnomah Falls, the most iconic waterfall outside of Portland.

I climbed out of bed on this drizzly, overcast Sunday expecting the worst after the late Bootsnall party, but it never came. No heart palpitations because of too much Redbull, no headache, no sore muscles from the 10+ miles of walking yesterday. On the contrary, I was ready to get out of town and into some of Oregon’s famous wilderness, rain or no rain.

Thirty minutes later after booking a rental car on Priceline, I donned my Gortex South Face (fake North Face) purchased in China last year for $30, and we hit the wet streets to find out the hard way that sometimes it’s the journey and not the destination that turns out to be interesting.

What we had not counted on was that somehow we had managed to book a rental car in some unreachable, parallel-dimensional corner of Portland that would be our undoing. It turns out that our car was sitting somewhere near the airport, a nice one hour away or more. One hour on a good day.

After taking the suggested train stop trying to find this place and climbing out into a literal downpour, two things occurred to me:

First, my trusted Gortex South Face had failed miserably. Very unwelcome, numbing, 40-degree water was leaching through the material and I was immediately soaked underneath. The blasted fake had kept me semi-dry while hiking Tiger Leaping Gorge last year but at some point along the way the cheap coating had just given up and now I was paying the price in body heat.

Second, we were standing in an Ikea parking lot. WTF? Our trusted train had just deposited us in the middle of freaking nowhere in a flooding Ikea parking lot — not what either of us had been expecting from the rental agency’s directions. I watched with dread as our bus sped away into the grayness towards the airport.

As I stood there dripping and shivering, I distinctly remember a conversation before I left that had gone something like this:

“It rains a lot on the east coast…so, should I pack an umbrella?”

“Nah…do it like the locals and just bring rain gear. Only Englishmen and sissies need umbrellas.”

Whenever trying to decide on fashion or an accessory, I usually ask myself WWJWD? What would John Wayne do? Who knows, but I’m pretty sure it would involve leather, a cigar, or whiskey…no sissy umbrellas. And so the umbrella was left at home.

Moments later, Amanda reached into her bag and a neat black shape popped over her dry head with a rebellious snap. 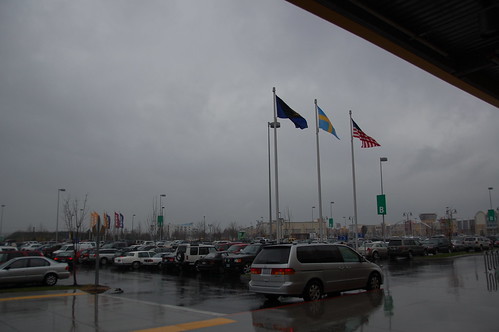 Unfortunately the umbrella wasn’t a London or NYC-style device the size of a beach umbrella, so it would only fit one under. WWJWD? He’d probably not be standing lost in a strip mall for starters! 🙂

And so we wandered around the parking lot blindly looking for the glimmering hope of a Thrifty sign, but it never came. The Indian guy on the phone had given Amanda cardinal directions, we were to walk northwest after exiting the train.

Like a real traveler, I pulled out my handy compass, shot an azimuth, and determined that northwest was across the parking lot and across the busy, raised, eight-lane freeway. We had managed to book a car in a place that could only be reached by car!

After six years of training in the Army as a map-reading, compass-toting Forward Observer, I used to pride myself in getting where I wanted to go. Amanda has more years of travel experience than I do, and between the two of us, our intended hike in Oregon’s wilderness had somehow landed us in a Swedish department store.

As Amanda got on the phone and tried to figure out how we were supposed to cross eight lanes of traffic to get to our car, I was having flashbacks of eating at the Ikea in Stockholm. Mmmmmm….raw fish, mustard, and berries — I miss Swedish food.

We resigned ourselves to catching the bus onward to the airport and then from there taking the Thrifty shuttle to the other non-existing Thrifty lot where our car supposedly sat waiting. When we finally arrived at the lot, the guy behind the counter charged me airport tax…making our rental comparable in price to others downtown that would have been much easier to get to. I told him that neither of us had flown and explained our entire adventure (1.5 hours and counting) of finally reaching the place, but his response was:

“You came from the airport — you pay the tax.”

Logical, but I still wanted to feed him a knuckle sandwich.

He did turn out to be extremely helpful in giving us great directions to stay off of the interstate and make the drive more enjoyable.

Our tiny car was just large enough for 2 people and 2 bags and so we drove off into Oregon’s outstanding wilderness only a couple of hours before the gray sky gave way to black. 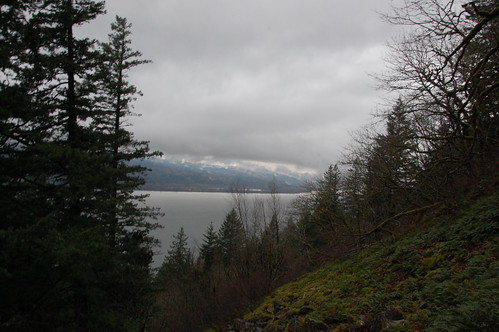 We proceeded directly to Multnomah Falls, which at 620 feet, is the nation’s second tallest year-round waterfall. Very cool. The drive was nice, despite the rain and windy roads, and the hike was spectacular.

As we huffed along the steep, curving path, the landscape transformed into something ghastly yet beautiful. Green moss covered twisted black trees and sprawled across boulder-strewn fields. We were nearly the only ones hiking thanks to the weather, and it gave time to soak things in without interruption. Some of the trees were ancient: three people holding hands could not have encompassed one of the giants. The air was cool, smelled green, alive, and so clean…I could taste the life with every deep chestful.

With the mist and dark limbs overhead, the forest looked like something you would encounter just outside of Mordor. It was evil, beautiful, ethereal. No wonder they recently filmed scenes from the movie Twilight here — it looked like a place some vampires would set up camp, teenie-boppers or not.

It dawned on me then that had the weather been clear, this place would not have been the same at all. I was actually glad that it was raining, chilly, misty…it suited this place — and myself — just fine. Inexplicably, I felt that all was right with the Tao in the universe in this corner of the globe at this given moment. A surge of buzzing happiness overtook me and I couldn’t stop smiling at the top of the falls…the crazy two-hour, unexpected adventure to get here had been more than worth it. 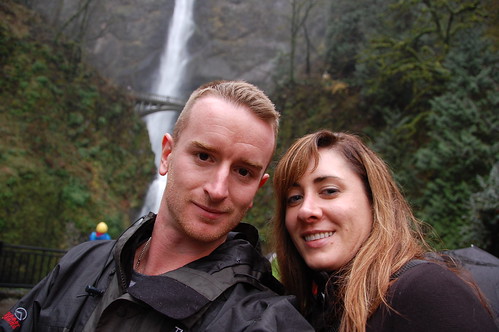 We didn’t have enough sunlight to linger, and after having been cold and soaked for so long, I didn’t mind starting back down the slippery trail towards the city. I knew that underneath those glowing lights there was strong, sacred coffee waiting to warm my fingers and brain. And there just had to be some kind of ethnic food waiting to be sampled.

Today life was wet, cold, and unpredictable, but I honestly wouldn’t have had it any other way.