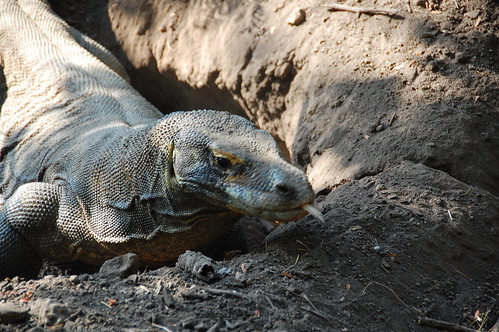 Update: I actually won a Solas Best of Travel Writing award for my experience with the Komodo dragons on Rinca Island. (it’s a better read than below)

I was staring down a full sized female Komodo dragon just a few feet from her nest and she was hissing at me.

She made a few steps in our direction just to emphasize the point that we were pissing her off and she could kill us with just one bite.  My guide, a 16 year old boy armed only with a big stick, took a few steps behind me as I took some rapid fire pictures.

It reminded me in a strange way of watching the grizzly bear in Alaska just a few meters away through my viewfinder while everyone else with good sense had already moved around behind me.
I wandered around Labuanbajo until around 13:00, trying desperately to find someone, anyone willing to share a boat ride with me over to the island of Rinca.  I rarely came across white skin, and when I did they had already been there via the 4 day boat that I was supposed to take from Lombok but had to skip.

The last thing I wanted to do was hang around this dusty ramshackle town waiting on travelers so I made a snap decision to just take care of business and get myself to the island one way or the other.  It was one of those nice moments when you feel the chi well up in your body and know that you can do anything.

I marched down to the waterfront past all the stares and did my best to charter a boat using my extremely limited Bhasa Indonesian.  I actually spoke more Indonesian than the captain spoke English which is scary, so we agreed on an outrageous price of US $40 (which normally would have been split between several people).

As we walked along the busy dock we passed quite a few sea-worthy looking vessels. I started getting a little nervous as we came to a line of decrepit looking boats.

My boat was large enough for several people but the rotting boards probably would not have supported much more weight than my own.  The paint was peeling and rusty nails poked out here and there when the loose wooden planks shifted.  To top it off, I found out the grizzled old captain wasn’t even going, he was leaving me in the hands of his 2 teenage sons.

I took a good look at the boy in charge, and despite his youth I could see the experience in his eyes.  He looked like he didn’t want to drown anytime soon – we at least had that in common, I tried it once in Kuta and it just didn’t suit me.  I went with my gut rather than the Lonely Planet which boldly warns not to take boats without radios and lifejackets because the waters around Komodo have some of the strongest currents in the world.

Radios…lifejackets….I would have felt safer with just one of the floaty styrofoam ring things hanging from the sides, but there was nothing – not even an old tire!

After struggling with the engine for a bit, it roared to life in a cloud of vicious smoke and nearly vibrated the boat apart. The boy pointed the nose toward one of the distant islands and two hours later I was pulling up at Rinca.  It occurred to me more than once that I was the only one on the boat and also that I had just bought a one way trip to an island full of semi-dangerous animals.  It was exhilarating watching our boat fight the currents and bouncing across some of the most dangerous water in the Indian Ocean – even more that I was alone!  I was planning to spend the night on the island somewhere and then hire a cheap ride back in the morning, surely there would be a dive boat or something on its way back to the harbor.

In Rinca, which is part of the Komodo National park and a World Heritage Site (translated as “overpriced”), the ripoffs started almost immediately. Just to come onto the island you are out $20 for an entrance ticket, “boat parking”, guide fee, etc. Disgusted, I made my way to the “cafeteria” located in the small camp on the island because I had skipped breakfast and lunch.

No food.  The cafeteria only sold water and peanuts.  I have no idea why they tell people there is a cafeteria on the island.  If you are planning to go, pack food!  I pondered my options for about half an hour which pretty much were catching dinner myself or going hungry.  One of the rangers felt sorry for me and produced a single pack of Ramen noodles from his rucksack, which I cooked and ate slowly to savor every last drop of MSG. It would probably be my only food for 24+ hours.

After lunch, I met my 16 year old guide.  A young kid always smiling with a nasty scar on his cheek.  Only 16 and he already has a more manly job (and scar) than I do so we got along great.  We set off past the few lazy Komodos that hang around the camp looking for garbage and made our way to the dusty trail. There was a large group of fanny-pack wearing older Germans on the trail in front of us frightening wildlife off for miles, so my guide looked at me with a grin and said,

“You OK, no trail?”   I nodded my head. I was really starting to like this guy.

We cut off the trail and lost the German tour immediately.  Rinca is hotter than Labuanbajo and within minutes, I had so much sweat dripping around me that it made the grip on my camera slippery.  We pushed through jungle and waist-tall grass, surprising lots of wildlife along the way.  We spotted scores of water buffalo (the dragon’s favorite dish), four wild boar with tusks, two deer, and then the grand prize….

The giant female waddled down the path in our direction.  Other than a hiss and lots of tasting the air with its tongue, it never acted aggressively.  It seems hard to believe, but these cumbersome looking lizards can run down a water buffalo over short distances, so if it decided to freak out getting away could be harder than it sounds.

She passed within a few feet of us but continued on until we came too close to the dirt hole in the ground that she called home and the dragon turned back in our direction.  We gave her lots of room.

They discovered just a couple of weeks ago that Komodo dragons (which can live up to 50 years) actually do have venom glands. Previously it was thought that the nasty bacteria in their mouths is what killed people.  Imagine how you would feel within close proximity of a poisonous snake, but now give that snake legs to run, a huge jaw full of teeth, and a body the size of a big crocodile.  Just being in the bush, only myself and a guide, was a small shot of adrenaline.

Almost on a queue, a monkey lunged out of the tall grass right at my feet and I jumped like a schoolgirl.

Before the day was done we spotted 11 more of the dragons in various places, several in a mostly dry riverbed that we hiked up for a while.  A majority of them were just basking in the afternoon heat, too hot and lazy to do anything, especially to eat a tourist.  I don’t blame them, I was so exhausted after just two hours of trekking and sweating that I could have joined them.

Talking to my guide, it turns out that despite their appearance and reputation, the dragon’s aren’t the big killers on this rough and tumble little island.  The island is actually full of poisonous snakes, including mambas and cobras which take out a couple unlucky people from the village a year.  They also don’t do much in the heat, but considering that for most of the walk I couldn’t see my feet in the tall grass, I thought about it a lot.

We finished our trek just before sunset and after thanking my guide many times, I made my way back to the boat dock.  The Germans which were just leaving had only spotted one dragon (the ones around camp don’t count).  I didn’t want to break their hearts so I said we saw a “few” and left it at that.  As they boarded their big chartered boat, I stripped off my shirt to go for a swim and get some of the sweat off.

“Yep, I’m sleeping on the island.”  I couldn’t have been more proud but pretended it was no big deal.  Evidently I was going to be the only tourist sleeping on Rinca island tonight….thank you low season.  I jumped off the 10 ft dock into the obsidian water below, and despite the nasty petrol leaking from the boats and floating garbage, it felt great.  I stayed in the water until I could see the reflection of the Southern Cross in the black water and climbed up the dock.

I sat there drying off under the stars, just myself and a handful of non-English speaking local men.  The petrol was burning my skin, the mosquitoes were feasting on my back.  There were a million stars above me.  Monkeys were screaming in the jungle behind me….and I was alone.

It took me a while, but finally – this was real vagabonding and I couldn’t have been happier.

The others were boat captains or local workers, no one spoke English but they accepted me somewhat. We smoked sickly-sweet Indonesian clove cigarettes and they taught me lots of new words in Bhasa. I paid close attention, considering how much I have had to use the language lately.  I mostly sat alone listening to them talk for hours and looking at the stars and occasional satellites drifting through the sky.  I thought about how those same satellites might be transmitting television back to people somewhere sitting on a soft couch and not even knowing that an island like this exists.

As a complete unexpected bonus, a 4 foot long cobra swam by in the black water below us, exactly where I had been swimming half an hour earlier.  Apparently this doesn’t happen too often, everyone chatted about it excitedly and I used my flashlight to illuminate it until it swam out of view.

To use the “toilet”, you had to take the big stick with you, that was the rule.  I walked just far enough off the dock to take a piss and realized that I was standing directly under the World Heritage Site sign.  How many people can say they have relived themselves under one?  🙂

I slept on the deck of one of the boats, gently bobbing in the Indian Ocean under the stars and will never forget the experience.

Previous Post: Welcome to Flores
Next Up: To Reuteng