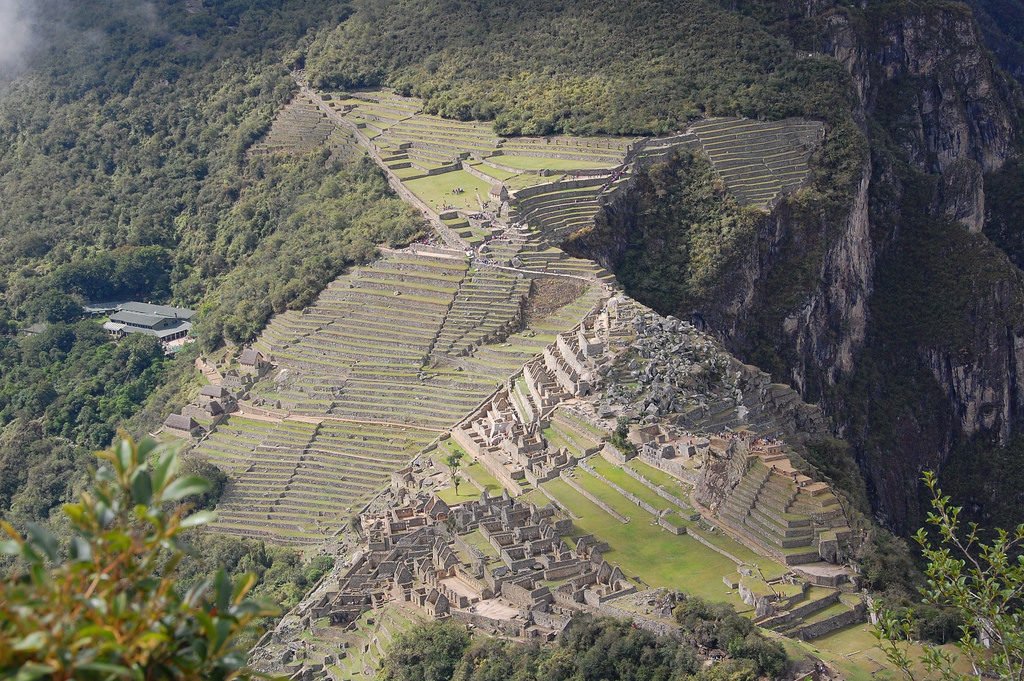 My legs were still a little sore from our hike down the tracks when the alarm went off at 4:15 a.m.

Those who know me know that there are very few things in this world of ours that will make me leave a warm, dry bed so early. The motivation this time was the extremely old ruins of the Inca city in the clouds: Machu Picchu.

This blog post is almost pointless. Without any way to share pictures, it’s futile to try to describe the feelings and views I had at Machu Picchu. All I can say is that the three constant weeks of dangerous-and-hellish bus rides across the full lengths of three developing countries were well worth it. Wow.

Imagine a city carved of stone when there weren’t metal tools, situated above the clouds, and surrounded on all sides by mountains. The scenery and the elevation were both breathtaking. Dazzling green steps spill down the side of the mountain where they once kept their crops. My conclusion is that these guys were obsessed at cutting and moving rocks. The messed up thing? For all the work done, the Incas barely got to enjoy Machu Picchu for 100 years before they disappeared!

Ingenious waterways and gutter systems still working today keep everything a brilliant green. Temples, housing, and even a big stone altar (the perfect shape and size for human sacrifice, which they did practice) make your imagination run wild as you walk the same stone streets this race of ancient people walked so long ago.

I can confidently say that even with modern machines, tools, and methods we would have one hell of a time building a place like this. To think that they did it all back then using the stars, stone tools, and without work animals is mind boggling. To me, the feelings I had standing among the Machu Picchu ruins blows away anything I felt looking at the more famous pyramids in Egypt. 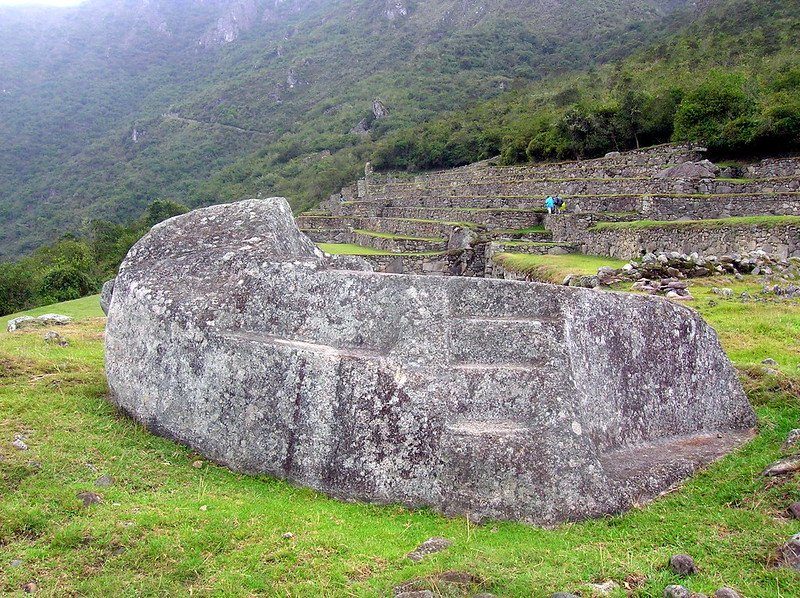 I looked for a long time in the drizzling rain at the stone altar used for human sacrifices.

It had small steps cut in the side for the priest that put him about midsection of whatever poor fool was lying on it for the last time. I looked from the altar out at the mountain scenery and tried to imagine that as the last views some people had before an obsidian knife found its way inside of them…

We practically ran up the stone stairs that morning to the front gates. It took a little over an hour of constant stair climbing, wheezing, and hearts pounding for oxygen, but we beat most of the other travelers and all of the buses to the top. Katrina, who was up an hour earlier, actually got #1 stamped on her ticket as the entrance number…a nice accomplishment.

Only the first 200 of us were allowed to climb up the small Huayna Picchu mountain which actually raises above the site. We queued up and at 7:00 a.m. we were granted the “privilege” of yet another hour of grueling stairs straight up the mountain behind Machu Picchu which allows the whole site to be viewed from above. This is where all of the famous pictures of Machu Picchu are taken.

My legs were shaking and my clothes were drenched despite the morning mountain air being chilly. I can’t imagine what my knees will feel like in a few months, but we were among the first group camping out on top and waiting for the clouds to lift from the site. The swirling mist was like something straight out of a Hollywood movie and was the perfect compliment to such a mystical setting. Eventually, the clouds lifted enough to get some pictures and see Machu Picchu in its entirety. Once again, there are no words.

After resting for a bit and fueling up on granola and Snickers to stay alive a few more hours, we made our way back down to the main site and spent the rest of the day just wandering the ruins in an exhausted state. The pictures from above were nice, but to me, nothing will ever replace running my hands along the smooth stones that so many people called home back then.

This city was so indestructible, so untouchable, yet the Incas still took the time to build up a drawbridge on the mountain approach. They didn’t take any chances, despite no army in its right mind ever attacking such a citadel. Instead, the theory is that it wasn’t weapons that made this race vanish mysteriously, but a virus or disease — probably delivered courtesy of the Spanish explorers from back then. Despite all their best efforts at defending their glorious city, they had no idea what hit them.

Of all the world wonders that I have been blessed enough to see while vagabonding the last three years, Machu Picchu is probably #1 for me — even ahead of Giza, Angkor Wat in Cambodia, etc. I think it is the setting of the place that did it for me…no wonder the city stayed secret for so long before farmers in the area finally let the word out. Without airplanes or satellites, you wouldn’t have a chance of finding this place hidden in the top of the mountains.

We stayed at the main site long enough to notice minute details that probably escape most of the tour groups. For instance, the stone bricks for the temples were cut so precise, you couldn’t squeeze a hair between the stones. The housing area, on the other hand, was cobbled together loosely — they obviously put a lot of emphasis on whatever their religion.

There was even an astronomical observatory and I used my compass to confirm that one rock carved in the shape of an arrow actually pointed due south — no doubt set up using the stars. There was another mysterious rock that was said to be an energy vortex and many people had their hands out around it hoping to feel the energy in the place.

I did my best, but I couldn’t sense anything around the rock…then again, borderline exhausted I didn’t have much chi to work with.

In the afternoon, the place filled with tour groups wearing bright hats and following flag-carrying leaders around speaking in a variety of languages. As things got crowded, we took that as our cue to leave and started down the slippery stone steps in a pouring rain. By the time we reached town, the sun was barely still shining, and we literally collapsed in the first restaurant on the way to recover and absorb some of what we had just seen. 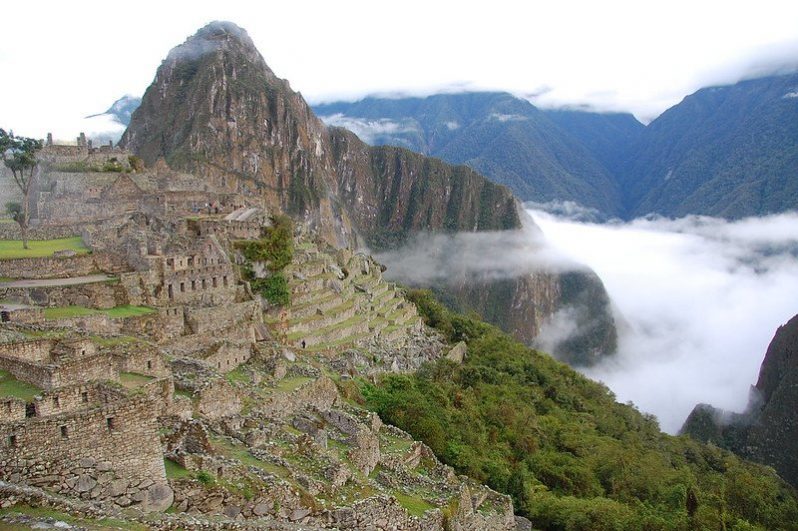 I highly recommend coming to see this magical place. If you are in South America, do it, even as a budget traveler it’s well worth the astronomical expense. I haven’t felt this interested in the history of a people or place since Egypt, and one of my first priorities after getting home is to pick up a book on the Incas to learn more. You can’t see something like Machu Picchu and not leave amazed at how much these people accomplished, no matter what their bizarre beliefs.

May there always be a road!

Previous Post: Whale Hunting in Lamalera, Indonesia
Next Up: My Opinion and Review of Taganga, Colombia