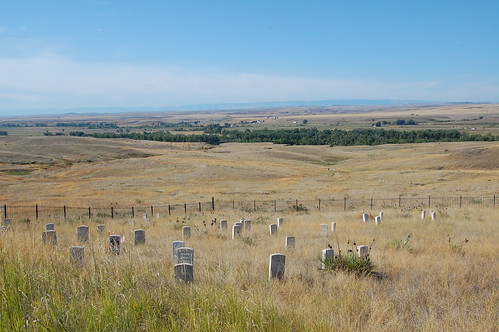 I was sweating slightly as I walked up the hill. Dead men once fell on each side of me.

The air held a sharp coolness but a perfect blue sky was letting in enough sun to keep me comfortable. In all directions, brown grass swayed across the landscape and the smell was clean with a hint of straw. Sometimes if given enough time on my own with few distractions, I can feel the energy in a place. Here, as I stood where most of the U.S. 7th Cavalry died, I could almost feel the fear and confusion. It was sobering to say the least.

After leaving Deadwood, we decided to detour north through Montana to the site of Little Big Horn, where General Custer made his career-ending mistake of taking on half the native Americans in the West — all at the same time. Unfortunately, like many arrogant officers, it didn’t only cost him his own life, but the lives of scores of soldiers fighting for him. 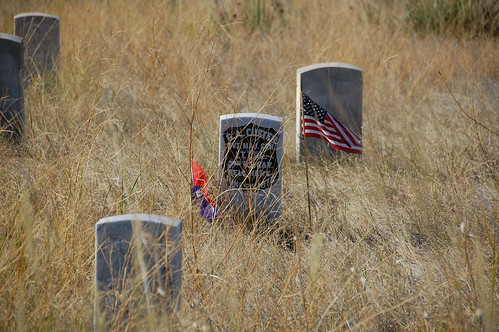 The weather could not have been any more perfect, but I could still feel the gloom growing in my gut. For starters, we were walking on the site of a slaughter. The grave markers denoted places exactly where each soldier had fallen, and countless hours of forensics have reconstructed the entire battle…which I was now replaying inside my head.

Men far more intelligent than I am have even found a way to do firing-pin signatures, allowing them to follow each and every rifle around the battle field to see where the panic-stricken men ran and when they fell. You could tell where they fell because there were no more shell casings. There was no such thing as being taken prisoner back then, it was all or nothing.

Aside from the gloom I felt on such a gorgeous day, I also felt a small spark of joy start to glow deep in my conscience. Once again, I am reminded of why I travel…to see history for myself and to put new lenses on my eyes. Sure, I was taught all about Custer’s last stand in school, but coming here and seeing it for myself gives me an entire new perspective. 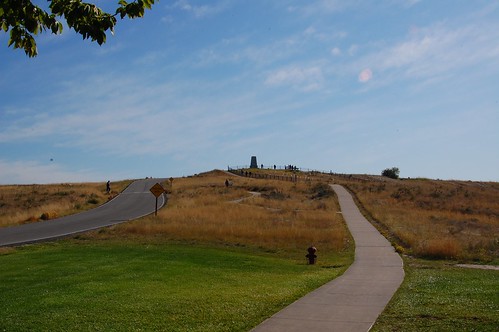 Here are some personal observations that I took away from Little Big Horn:

1) There was no last stand here. Most of the grave markers were on the way up the hill, where soldiers were shot in the back trying to get to what we consider to be the last stand. Hollywood would have us picture a brave group of soldiers atop a hill battering down wave after wave of advancing Native Americans…but in truth, it was a literal slaughter. Even the archaeologists agree now that the “last stand’ probably lasted no longer than five minutes once the soldiers reached the top of the hill.

2) Most of the soldiers fell in groups of two and three. Just like I learned in the ARMY, stick with your buddies. And that is exactly what they did down to the last minutes of their lives. A chill ran through my blood as I pictured guys trying to help their wounded comrades up the steep hill.

3) The remaining soldiers that made it to the hill all fell near General Custer. They either had enough faith in his charismatic leadership or were brainwashed enough to trust in the chain-of-command. Either way, they stuck close to their leader.

4) There were many Native American markers everywhere as well, and I appreciated the quote placed on each one: “while defending the Cheyenne way of life.” It is a good reminder of who was on this continent first.

5) Seeing all these markers of brave men on both sides that fell in such a beautiful place seems like such a waste of life. War is total confusion, and despite your level of courage or training, your chances of survival seem completely random.

If you manage to get to the battlefield, grab the audio tour CD from the shop. I usually hate those things and their annoying “beeeep” when you are expected to take some action, but someone was nice enough to hand us one on their way out of the park and it was extremely educational. I dare say it even enhanced the whole visit.

.
Previous Post: Bear Country USA
Next Up: Welcome to Yellowstone!