Laos and the Good Old Days 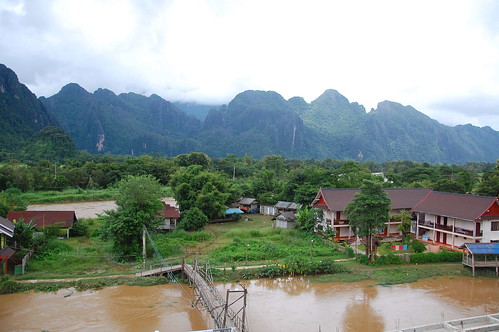 My minivan driver cursed in Thai as we rolled to a stop somewhere between Chiang Mai and Vientiane, Laos.

The engine gave up halfway through our 14-hour journey. There we sat in the dark, hostages of some unnamed place where only mosquitoes and their food live. We waited drearily for our rescue vehicle as rain splashed off the windows and temperatures inside began to rise.

Many red-eyed hours later, I was forking over my passport at the Thai embassy in Laos, which then subsequently closed for the Buddhist Lent holiday. I wasn’t going anywhere for the next five days, which in reality is four more days than necessary for hanging around Laos’ beaten-up capital city.

I probably gained five pounds just eating great food and sitting around French cafes for a week like some introspective colonist. What else was there to do?

I spent my first visit to Vientiane back in 2006 in less-than-ideal conditions. I was sweating in bed with three days of my worst case of food poisoning. I claim that one. It was my poor decision to eat a spoiled BBQ bat on a stick when I first arrived. So I welcomed the chance to find the “rugged charm” that guidebooks brag about. Or at least something to eat less poisonous than a winged rodent.

“Charm” is a very loose, relative term whored out by travel writers. I’m not sure if I found it. What I did find was some pretty decent food and far less red hammer-and-sickle flags that once adorned every large building the first time that I was there. Even the number of police on patrol with spray-n-pray submachine guns had dwindled down to a small handful.

Was Laos turning soft on me? Time to investigate.

My quick visa run from Thailand to Laos turned more or less into a three-week visa marathon as nostalgia took over and I decided to have a proper look around a country that I loved seven years ago.

Southeast Asia’s poor, landlocked country unexpectedly turned into a time capsule for me. I could hardly believe my eyes as I splashed through puddles on those same streets my worn flip-flops carried me on my first trip abroad. 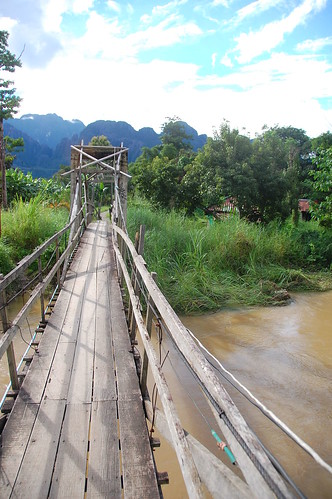 I had to check my passport again to make sure it was a Lao P.D.R. stamp that I had paid for.

Wow. Every traveler knows that places change. And every smart traveler knows to receive a place in the raw rather than comparing it to the first time they visited. Falling into the sticky web of comparison is a sure recipe for moody grumblings. I became entangled, but fortunately still managed to sprinkle in some enjoyment between bitter well-back-in-the-old-days complaints.

No return visit to a country can match up to the initial honeymoon feeling of your first time. I expected the excitement and good people I enjoyed in 2006. Instead, I found a nagging, hair-in-rollers country planted in front of a soap opera with cigarette dangling from lips telling me to take out the trash. Oh, and pay $2 for the opportunity to do so.

Yep, the honeymoon was over. 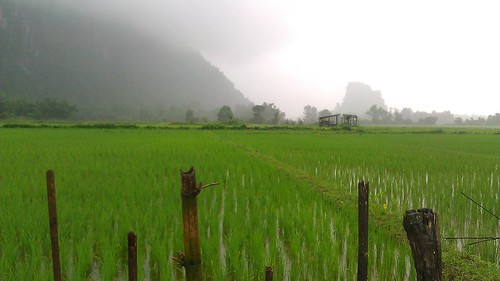 Laos’ first vulnerability is that it sits squarely on the backpacker trail in Southeast Asia. It’s far too close to Thailand to avoid the onslaught of mass tourism. Even short-timers manage to make it to Vang Vieng, where up until a government crackdown in November last year, was a crap bucket of drugs, debauchery, and vomiting tubers who managed to survive the Nam Song River.

There’s still some revelry, and marijuana is still available as a pizza topping, however, Central Laos has tamed down quite a bit. Here’s what I found in Vang Vieng in case you’re wondering what happened to your favorite party spot.

Rather than get into the very muddy, very swift river this time, I hired a mountain bike and rode in the pouring rain for a day. I did enjoy some adventure climbing around a massive, wild cave for hours. I may or may not have wandered in circles. As Daniel Boone, an American wilderness pioneer, once said: “I was never lost, but I’ve been turned around for three weeks before.” We’ll just leave it at that.

Any place with a route as popular as the stomach-twisting Highway 13 from Vientiane to Vang Vieng to Luang Prabang is bound to culturally mutate faster than average. Laos was no exception, and I’m afraid the coup de grâce came when the European Council on Tourism named Laos as the best tourism destination for 2013.

Western Europeans were paying attention, immediately changed their plans from Phuket to Luang Prabang, and were now munching on baguettes all around me. The cries in Dutch and French from snot-nosed kids in Batman shirts could be heard all over the city.

I had very enjoyable moments on this trip to Laos, but the general vibe and prices have sadly gone in the wrong direction. Someone will surely want to argue, but Laos is now more expensive for backpackers than their rich, bloated neighbor to the south: Thailand.

Even with hordes of berserker tourists sacking places faster than drunken Vikings, Laos is an extremely poor country. It’s not easy to survive as a landlocked entity anyway, but Laos has a unique problem. They have the highest number of UXOs (unexploded ordinance) left over from wars per capita than any other country. 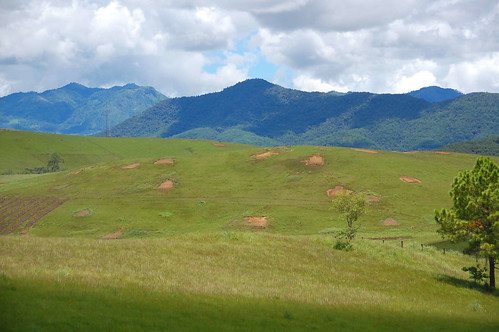 Bomb craters on a hillside.

That’s not a very good claim to fame.

They’ve got lots of unused land, but who wants to risk arms and legs to plant a handful of white rice? A brave few do anyway. Hunger can turn farmers into heroes, but the UXOs have stifled development outside of all tourist areas. What they do have is one hell of a river — the Mekong — and the plan is to dam it up for lots of hydroelectric plants. Excess electricity, which there will be plenty of considering that many villages barely use it, will be sold to Thailand.

An ecological nightmare in the works, learned from an even bigger friend of theirs to the north: China. Many rich shitheads will will get richer, but I have a feeling in 10 years those dusty villages along Highway 13 will still be just bus-window blurs punctuated by half-dead dogs and hungry kids. 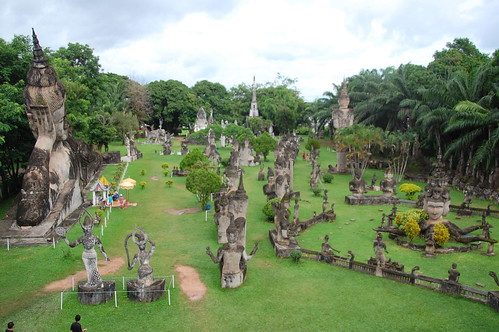 Still, Laos is worth a look — but do so soon. I did use my extra time in Vientiane to finally make it out to the Buddha Park — a bizarre, slightly creepy place constructed by a shaman who mixed Hindu and Buddhist lore to create one interesting garden. I also diverted an extra eight hours on the most winding mountain road devised by humans to the even stranger Plain of Jars. 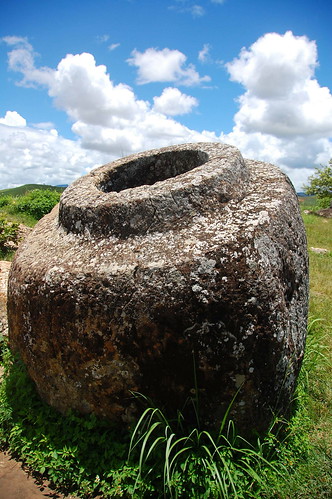 The Plain of Jars is a collection of sites that still have archaeologists baffled. People guess that the giant stone jars there are at least 2,000 years old. No one really knows where they came from or how they were used. Theories range from the jars being used as sarcophagi to giant containers for making beer or collecting water.

Seeing that there are hundreds of the jars, and each had to be made in the scorching, Southeast Asian sun with crude tools, I’m leaning toward the beer theory. 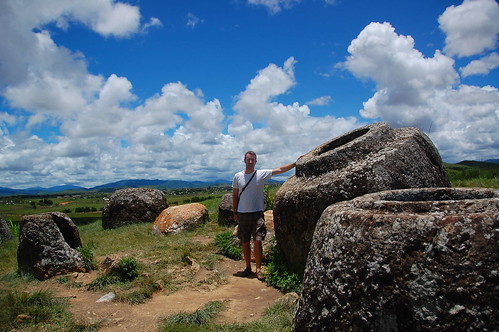 These things are big!

The entire plain is dotted with enormous bomb craters. Red-and-white UXO markers still exist from the many sweeps to clear munitions. Undoubtedly, many stubborn unexploded objects remain, and tourists who aren’t prosthetics enthusiasts should really to stick to the trails. Not a bad idea.

Some jars near to big craters were split apart, and others had perfectly round entrance holes from shrapnel with sizable exit wounds on the other side. Creepy stuff, and sad that these millennia-old artifacts were nonchalantly bombed. The equivalent could be compared to dropping bombs on Stonehenge in the 60s and 70s. 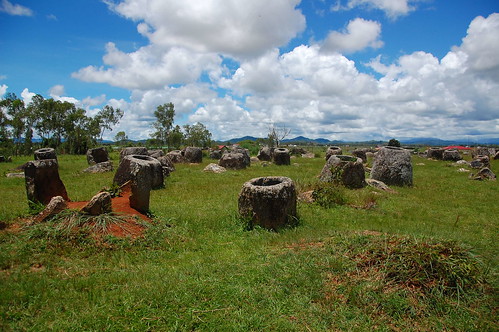 Luang Prabang, once one of my favorite places in all of Southeast Asia, is still nice, but families dragging suitcases full of cash and guidebooks have greatly inflated prices. Plus, the dollar has gone 20 percent deeper into the toilet since my first visit, making the place dreadfully overpriced for all but the most temporary travelers.

Renting a motorbike in 2006 cost me around US $5. Now the price was a whopping $15. Even without a discount, you can still hire a motorbike in Thailand for $5 per day; it costs only $3 in Pai.

All the usual sights and activities that were once free, no matter how small, now have ramshackle entrance booths staffed by bored people who demand money. Climbing to the top of Phou Si hill to watch a sunset, once free, now costs $3 for the 20-minute walk. 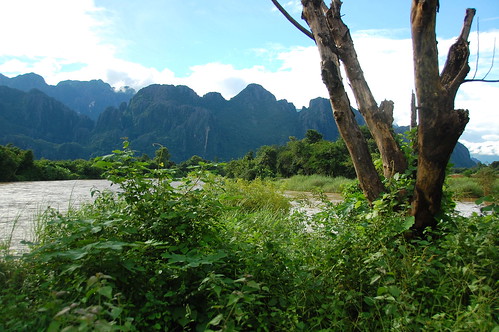 Vang Vieng was the same. Any cave, bridge, hill, waterfall, parking lot, or footpath that was once free, now costs a disproportionate amount of money to experience. Even taking a piss in the most nightmarish hole-in-the-ground toilet imaginable will cost you a quarter.

Small fees indeed, however, not a single penny is being put back into the site/attraction. A lion’s share of the money goes to make an entrepreneur’s nephew’s Mercedes payment. Meanwhile, Laos remains poor.

What hasn’t inflated in price is booze. Why is it that most of the oppressed indigenous people and minorities in the world conveniently have access to cheap, tax-free booze? To say that drinking in Laos is cheap is a grave understatement. Beer is cheaper than potable water in some places.

Same as travelers paid in 2006, a 640ml (big) bottle of beer costs around US $1 and a 750ml bottle of Lao Lao whiskey — essentially moonshine made from fermented sticky rice — costs exactly US $2.

And those are tourists prices; the locals can go blind and knock their livers full of holes for even cheaper.

Aside from the exorbitant price increase and friendly attitude decrease, I did manage to meet some interesting long-term travelers and made a foray to the famous Bowling Alley in Luang Prabang — the only place to party after 11:30 p.m. Watching drunk backpackers sling heavy balls down the wrong lanes then argue about who gets the points is still as entertaining as it was in 2006.

I happily made it back to Chiang Mai a few days ago, and despite the complaints, I’m glad that I got to see an old sweetheart of a country from years back. Even if I barely recognized her.

Luckily, time somehow sheds a sweetened, positive light on memories and I’ll probably be in love with Laos once again in a few months. Us Americans tend to cling onto and romanticize the “good old days.” The term “old fashioned” is always used in a positive reference, never to remember that teeth were once pulled using horse tools or that doctors weren’t really sure what half those squishy organs inside of you really do.

Laos…see you again in seven years. 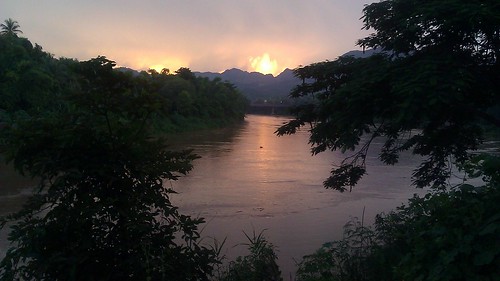 Sunset on the Mekong in Luang Prabang

Previous Post: The Rainforest World Music Festival
Next Up: Sunsets and The Machine