My First Encounter with Headhunters 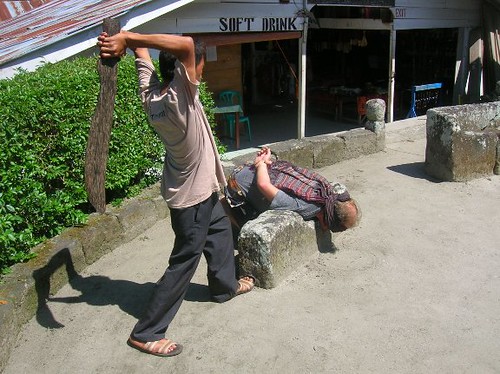 A quick twist of the throttle sent wind through my hair and vibrations from my buzzing motor through my body. Mile after mile of gorgeous volcanic scenery kept unfolding in front of me on what is perhaps the most enjoyable motorbike ride of my life.

On my left, farmers stooped in rice fields, knee deep in muck, while their buffaloes chewed lazily. Old churches with rusting steeples dotted the landscape. On my right, puffy clouds crossed the metallic surface of the world’s largest volcanic lake; a fisherman was throwing out weighted nets from his small canoe.

Just beyond the lake, green walls scorched with patches of sulfur and black jutted sharply to the sky, reminding me that I was indeed riding inside of a volcanic crater. The sweet smell of tall grass mixed with smoke from small cooking fires.

Moments of pure travel bliss like this don’t come often, but when they do, every penny spent, every life sacrifice, and every new line on my face are suddenly justified. 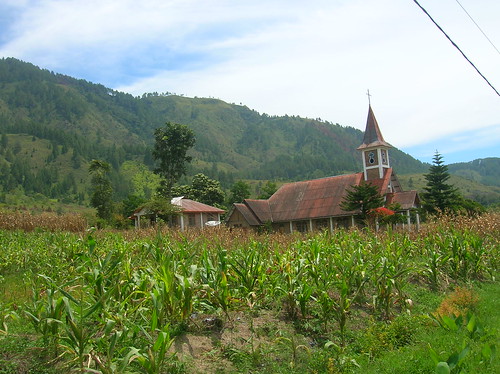 I was riding around Lake Toba in Northern Sumatra on the far west side of Indonesia.

The tranquility of the place today barely does it’s murderous past justice. Lake Toba is actually the largest volcanic crater in the world, and when it blew many thousands of years ago, half of the world’s population was killed off, either in the cataclysmic event or the volcanic winter that followed.

Just as Yellowstone is expected to destroy the world one day, Lake Toba never actually formed what we typically envision volcanoes to look like; no cute mountain with smoke coming out of the top. Lake Toba just exploded with unbelievable force sending dirt, trees, animals, and a few surprised inhabitants into the atmosphere. The ash and debris actually lowered the temperature of the Earth for over 1,000 years. 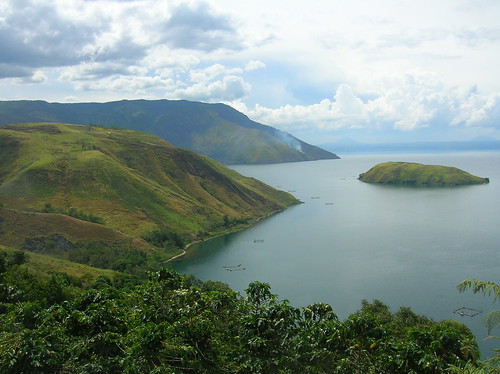 The lake is calm and beautiful today but it isn’t done just yet. A new volcano cone has formed inside of the first crater, pushing up from the depths of the lake, to form Samosir Island. I was riding my motorbike around a volcano inside of a volcano. Or, on an island on an island (Sumatra is an island). Amazing.

Despite being brutally deep, Lake Toba is still pleasantly warm enough to enjoy. While swimming and  diving from the wall at my guesthouse, I couldn’t help but think of the geological horrors and chaos going on beneath my kicking feet. This lake goes into the very bowels of the Earth, and at some point down there, fire actually meets water.
Lake Toba was settled by the Batak people who regularly enjoyed lopping off heads and barbecuing both colonists and missionaries. Where else should a brutal tribe of cannibalistic headhunters settle down? By the world’s deadliest lake, of course. 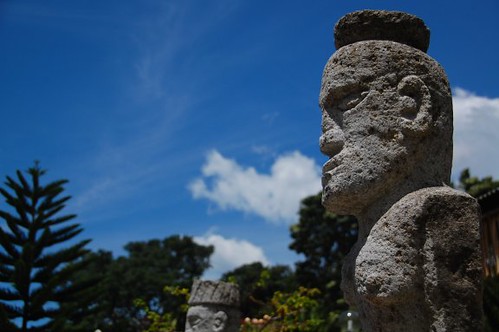 I rode to one of the ancient Batak stone circles where you can still see the chopping block and stone chairs set in a ring to watch the spectacle. A Batak man – who claimed to be an unemployed aeronautical engineer as well as a direct descendant to the Batak throne – gave us all a pleasant tour and head-chopping demonstration which literally made my skin crawl.

I always suspected, but now I know more than ever:  headhunters really don’t fool around.

First, the soon-to-be-executed were kept with the pigs in a hold beneath the king’s house – I’ve stayed in some really bad hostels, so that’s tolerable.

Next, the victim – we volunteered my Californian friend Chis, because he’s Californian of course – was bound and blindfolded, then leaned against a rock where a man beat the hell out of him with a stick to “rid him of his magic.”

The beatings, nicely focused around the groin because that’s where a lot of magic resides (who knew?) were designed to weaken the man but not kill him. Next, the man was brought to the chopping block and was relieved of his head in front of a live audience.

As if that wasn’t enough of a downer, the poor guy was subsequently chopped into pieces and distributed to whoever wanted them. Apparently people were not eaten for the taste, it was primarily so that you could absorb their magic and become stronger yourself. With most of the magic residing in the groin, well, you can guess what was considered the choice cut.

When I asked what someone would have to do to be executed like this, our guide said a typical offense would be to sleep with one of the king’s wives.

Seriously? In a village of 40 – 60 people living in shared houses where privacy wasn’t even a concept, could a guy really be that stupid? The lesson here: Don’t sleep with a king’s wife. Especially one that saw fit to orient his entire village around a stone chopping block.

Despite torrential rains dumping down nearly every evening, I’ve got Wi-Fi in a gorgeous guesthouse, a view of the lake, great new friends (Italian, Dutch, Croatians, and even a Californian), and headhunters just down the street.

I think I’m going to stay here a while.

Previous Post: Welcome to the Jungle
Next Up: Trouble in Lake Toba, Sumatra