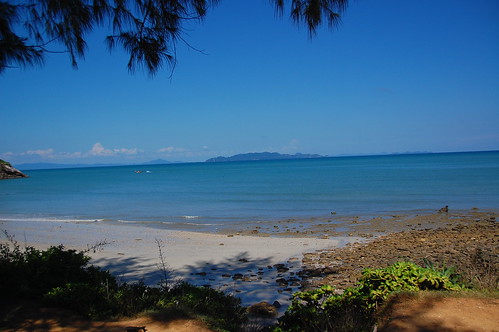 Let’s just pretend that there isn’t a gaping, one-month hole in my blog entries, shall we?

I have finally realized my overall travel dream – but there’s a catch.

Things are a little different with my traveling these days. Back in 2006 and 2007, life was good without the interference of electronic devices. Ironic, coming from a former hacker who always had to have the latest and most expensive phone/PDA/toy as soon as it came out. Hell, at one time I had no less than seven home-built computers running various operating systems humming quietly in my house.

The electric company had to make cutbacks when I sold them.

Now that I carry more gadgets in order to make a living than clothes in my bag, I’ve been on a quest to find the perfect island, a place not too busy and not too secluded where I could live and work in peace but not have to interact too much with people wearing only loin cloths.

Sure there are plenty of islands out there, but you typically have to choose between people wearing loin cloths or tourists wearing Speedos. Even worse, travelers wearing Full Moon Party T-shirts still talking about their prom exploits.

Not that I have anything against loin cloths and spears, however, typically the more loin cloths you encounter the less your chances of finding a reliable Wi-Fi signal.

Just like food, water, and Thai Redbull buckets, I need that juicy Wi-Fi to sustain myself and to keep my employer (New York Times’ GoAsia) from sending armed men with sticks to flog me.

After sweating more liquid than humanly possible in the humidity and stink of Bangkok for eight days, I had enough and knew that it was island time or risk an increase in insanity.

So, I wrestled with the idea of returning to Koh Lanta – my favorite island in all of Thailand and the world – for days. Supposedly the boat service had stopped because of the low season, and most businesses were supposed to be shut down for the year. Back when I was there in 2007, the internet was only a myth advertised by internet cafes with broken keyboards and the screech of connecting baud rates.

I decided to take a chance and my gambit paid off: I had faster Wi-Fi sitting inside my air-conditioned bungalow within sight of the beach than I do at home in the U.S.!

Yes, the island was mostly closed, but a few brave or confused travelers made the journey. For over a week, I had only two restaurants to choose from, but a third opened maybe because they heard I was staying there. I was literally the only guest in my bungalow – greatly discounted for low season – for some time.

I even managed to secure my manly survival skills by finding and opening coconuts on the ground for eating and drinking. I also spent several days buzzing around the island on my motorbike.

Talk about an office. Sure, I had more giant cockroaches and mosquitoes than the average office at home, but wow – few people at home can walk out of their door onto a literally deserted beach with soft sand and good swimming. A beach that faces west with incredible sunsets, even. 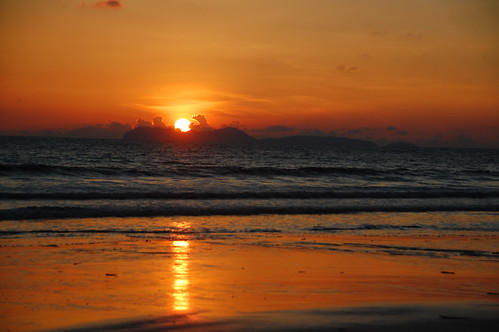 Many of my favorite haunts – bars, and restaurants from my three weeks on Koh Lanta in 2007 – were surprisingly still there. I had a lot of nostalgia walking the beach and having flashbacks of sitting in places and on the bamboo platforms in the sand. Unfortunately, every single place with no exceptions was not only closed but boarded up and in depressing disarray.

Regardless, I now have a new home on the west coast of Thailand; a six-year-long travel quest comes to an end and a dream realized. The final piece of my where-to-live-and-work puzzle has been sent to me.

The only bewildering thing to me was how much the island had been trashed. In literally less than a month of being off season, broken furniture and rubbish littered the fields and beaches. The damage certainly did not match the level of activity in a place. A pissed off Incredible Hulk teaming up with Chuck Norris couldn’t do this much damage in such a short time.

I started to think that maybe this goes on every year: Locals have one giant party to celebrate the end of a prosperous busy season by smashing everything in sight?

Soon I had an answer.

Unfortunately, I found out that secluded paradise comes with a price. And they close tourist islands for a reason. Within 10 days, Mother Nature decided to kick the crap out of my little piece of sand over and over again. When the rain began, it did not stop, and escalated into full-scale tropical storms with tree tops blowing down and roofs literally coming off the bungalows around me.

It’s hard to enjoy fast Wi-Fi when the power is off more than it’s on. I pressed forward, but in the end there just weren’t enough candles and bungalows can get pretty small – no matter how spacious – when the sky is falling around you.

I bailed out before my laptop fell to the same fate it did being connected to the power during a lightening storm in Sumatra last year. I made my way just a little bit north to Railay, an adventure paradise.

So, Koh Lanta, once again you’ve teased me with the prospect of a new, permanent home. At least now I know, and I will certainly be back.

Previous Post: I’ve Been Shanghied!
Next Up: Full Moon Burns