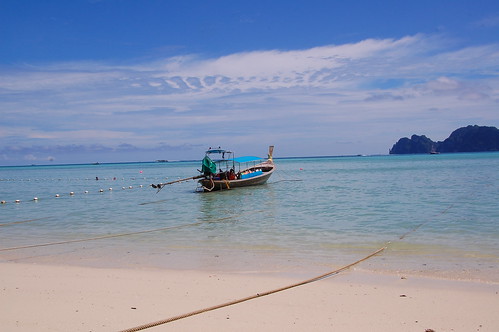 I went to the top deck of my ferry just in time as we arrived at the dock on Koh Phi Phi Island.

As waves slapped against the side of our boat, our powerful engines groaned in reverse; the smell of diesel exhaust was delicious. Deckhands threw massive ropes to the pier as we thudded into position. I was absolutely in awe. Limestone cliffs draped with greenery ripped upward out of the blue water — Koh Phi Phi is quite possible one of the most beautiful islands in the world. Even with this being my third visit to the island, the scenery was breathtaking.

My heart was pounding as I ducked below deck to grab my rucksack.

Koh Phi Phi — pronounced authentically “goh pee pee” — is a tiny island in the Andaman Sea on the west coast of Thailand; there are places in the island to stand where you can see water on both sides. The island is almost within eyesight of my all-time favorite Koh Lanta, but Lanta was pretty much closed for the low season. I chose to come back to Koh Phi Phi for a week of diving and partying — yes, even vagabonds need a break sometimes!

Koh Phi Phi was the most-devastated island during the 2004 tsunami. Things are reconstructed for the most part, however rampant development has spread its ugly tentacles all over this beautiful island. Along with the development came obnoxious travelers dragging suitcases and giving the locals a hard time.

This isn’t some secluded island to play Robinson Crusoe like those I found in Indonesia last year — the secret here is out. This is one of those places you take for what it is, bump elbows with the tourists, and have a damn good time anyway.

Luckily, I have hit Koh Phi Phi during the low season and things aren’t too busy. Sure, there are plenty of fedora-wearing, beer-clutching douche bags to clog the narrow streets, however, I was able to negotiate cheap accommodation in a gorgeous bungalow on the quiet part of the island.

Walking the busy streets brought back a flood of memories, including the 2006 tsunami scare that made world news. I will never forget running with panicked locals to the top of a jungle hill, then shaking with adrenaline while we waited for the water to come. Here is an old story I wrote about the tsunami scare.

My nostalgic daydreams don’t last long; lots of things have changed around the island. Some of my old haunts are still here, but now they are empty and the nightlife has moved to different parts of the island. Redbull buckets made with generic ingredients no longer taste the same, and rather than the party being passed from place to place each night, now beach bars compete viciously for business.

To add to the distaste of all the new competition, nearly every bar and restaurant has recruited hordes of backpackers who stand in the streets and tout specials to get you inside. They are paid only with a free meal and/or drink. Sometimes 20 or more compete to hand you some coupon. I am certainly an advocate of traveling cheap in any way possible, but selling your soul to hassle fellow travelers in exchange for a free burrito is a little too much.

On a positive note, despite a few storms in the evening, the weather during this “rainy season” has been superb. I spend the days reading on the beach and nights are spent lounging on mats watching fireshows. The smell of burning torches and saltwater is intoxicating, as is dancing in the sand with people from all over the world. In the mornings, I am not sure if the pounding in my chest is from the techno bass already starting or my heart flushing the remains of Thai Redbull in my system.

The internet here is ridiculously slow and expensive, giving me a good excuse to stay off the laptop for a change. Writing deadlines haven’t even found my little island yet; the sand feels sensual on fingertips compared to the keyboard.

.
Previous Post: Thailand 4.0
Next Up: Ayutthaya and the Missing Buddha Heads