What Does Kentucky Proud Mean? 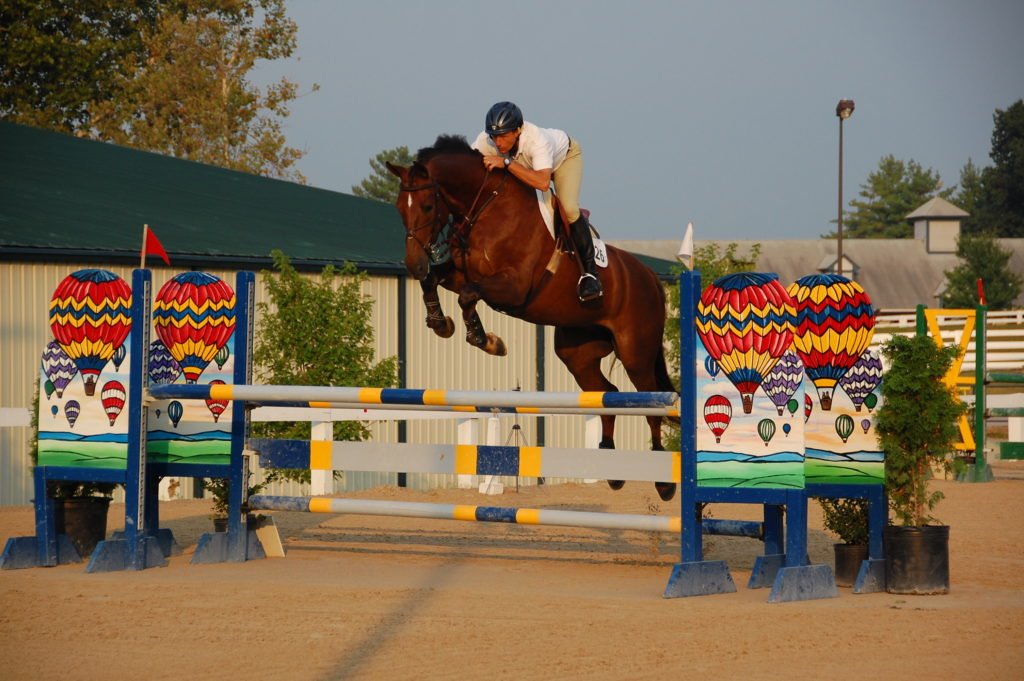 So what does Kentucky Proud mean? The slogan has been around for a long time.

Most travel writers stay busy writing about places far from home. But since a rocky year has kept me close to home for the longest stretch in a while, it’s time to take care of some long-overdue business.

I’ve been wandering remote places for many years. And as any traveler knows, the default icebreaker received on the road is predictable: “so where do you come from?”

When I tell people that I hail from Kentucky, the responses range from a shocked “Really?!” to a misguided “Oh…you must really like chicken.” Even the few Americans I meet abroad look confused when they find out that I’m not from New York, California, or the Pacific Northwest.

And while a few cultured individuals met over the years replied with either “Kentucky bourbon!” or “I love Bluegrass music!”—far more didn’t know the first thing about the place I’m sitting now. Or worse yet, proved that their minds have been decayed by stereotypes oozing from the TV.

So without further ado, this is what it means to be Kentucky Proud: 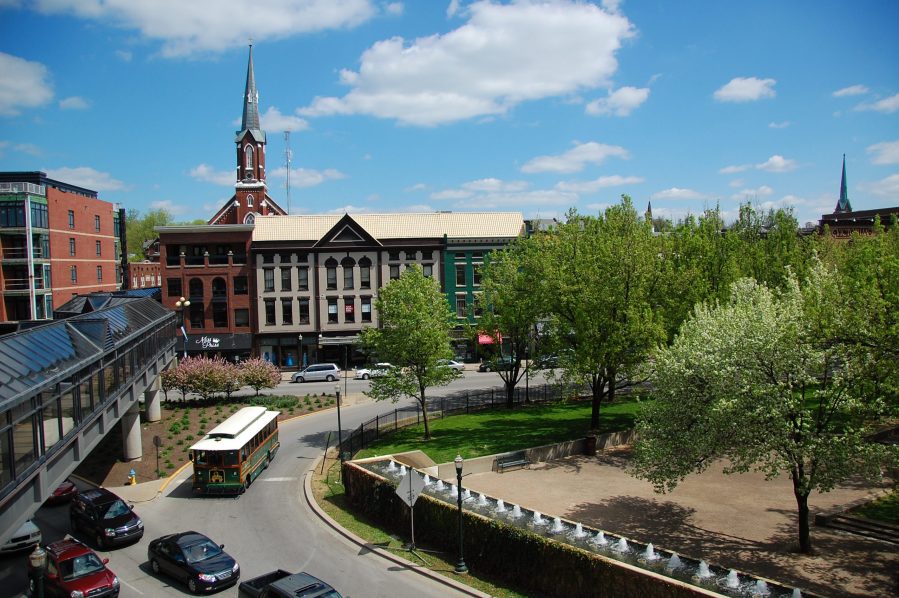 My hometown isn’t big, but it’s not that small. Around 300,000 people call Kentucky’s second largest city home, but it surely doesn’t receive as much attention as Louisville. I’m embarrassed to admit that I was once bored here. But since I began vagabonding in 2006, Lexington has grown more and more into a place that I am proud of.

In fact, I actually miss this city now when I’m gone. Seeing all those perfectly manicured horse farms while coming into the Blue Grass Airport brings tears to my eyes every year.

Forget all the generalizations of conventionality. Sure, you’ll still find sad nine-to-fivers queuing for corn syrup at the local Applebees on Friday nights, but Lexington has become increasingly weird. In case you didn’t know, weird is a term of endearment here in Kentucky. Some of Louisville’s weirdness has crept east along I-64 and caught on well in Lexington.

Sure, a few rednecks (more on them later) still move to Lexington in search of wives, fortune, and indoor plumbing, but check out these stats:

Not bad for a city that ranks only 62nd in America for population (at the time of writing). As a full-time starving artist, I’m unfortunately on the wrong side of most of these statistics about Lexington, but still.

But despite the grown-up statistics, Lexington feels like a college town. With around 30,000 students, the University of Kentucky guarantees that there is never a shortage of cheap-beer-filled red Dixie cups being clutched at any given time. Luckily, there are enough resident Irish here to balance the sorority shrieks that ring out from bars.

People Aren’t as Inbred as You Think 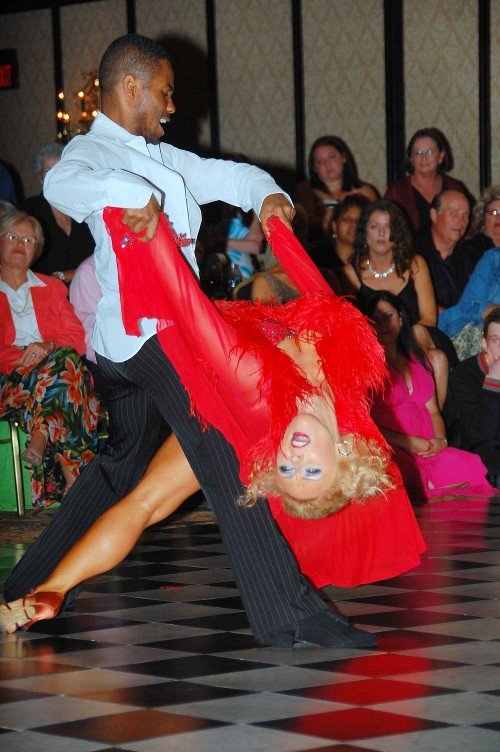 You have to go digging deep in the hills to find those Deliverance stereotypes; they exist in the hidden corners of every state. On the contrary, people here are surprisingly good looking. The University of Kentucky has always been a favorite of Playboy for some reason. And despite Hollywood being a flaky place far, far from here, for better or worse, we’ve fed a steady stream of talent into the gaping cocaine maws.

We supplied at least two of People magazine’s Sexiest Men Alive: Johnny Depp and George Clooney. Clooney hails from my hometown of Lexington, and Johnny has been spotted popping into bars around downtown. Even William Shatner frequents Lexington and has a farm here in Kentucky. I’ve met him twice.

We raised a Six Million Dollar Man (Lee Majors) and turned him loose on Hollywood. Tom Cruise spent a chunk of his childhood in Louisville. More than a few people swooned over Maverick in his pre-crazy days. Ashley Judd and Jennifer Lawrence – two gorgeous Kentucky women – have been making jaws drop for years now. I’d take Katniss Everdeen in my foxhole any day.

While not much of a looker himself, Larry Flynt—an Eastern Kentucky native—created quite a popular magazine of physically endowed people: Hustler. 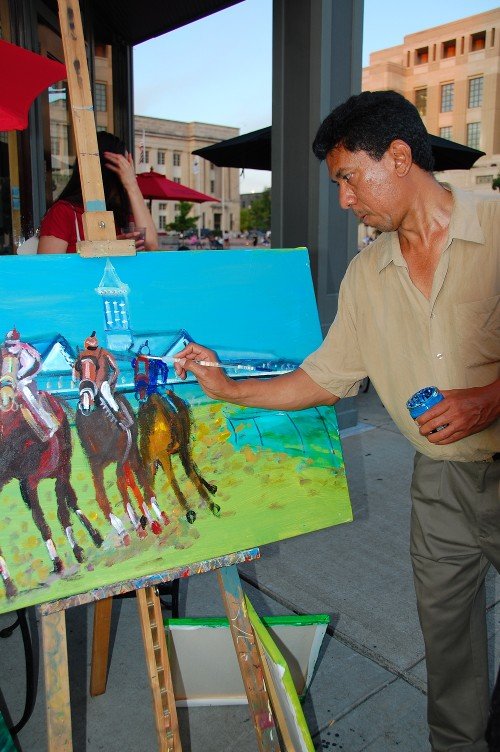 No surprise that I’m going to mention Hunter S. Thompson (Louisville) or his cohort, Ron Whitehead—two of my most twisted literary influences. Nominated for a Pulitzer Prize twice along with the Nobel Prize, Ron Whitehead has helped keep Kentucky weird for decades. He even befriended and edited for Jack Kerouac, Allen Ginsberg, Andy Warhol, and other dangerously genius edge-dwellers.

Ever cringed during dialogue about zombies while watching The Walking Dead? Thank Robert Kirkman, a Richmond native. Missy Hughes, born in Lexington, convinced strangers to hang out naked on the Discovery Channel’s hit show Naked and Afraid.

I can now proudly name Sturgill Simpson in this roundup of Kentuckians making creative ripples in the murk of this world. Hell, I even got to hang out with him at my birthday cookout before leaving the U.S. last year. If you’ve never heard of him, his new album has the people at NPR and Rolling Stone reliving the 60s and still trying to figure out what just happened. 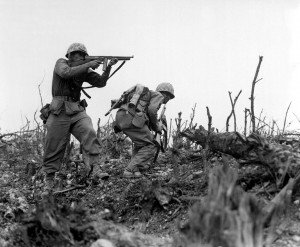 Let’s skip the easy ones, like Muhammad Ali from Louisville. Garrett Morgan was an African-American from Kentucky who invented the first traffic signals and gas masks. Neither are very fun, but both are necessary evils. John T. Thompson—inventor of the famous Thompson “Tommy” machine gun—was from here. So was Jim Bowie, one tough folk hero with a big knife. He probably could have used John’s invention while fighting for the Alamo.

Even Lewis and Clark met near Louisville in 1803 to plan their epic walk to the Pacific Ocean. 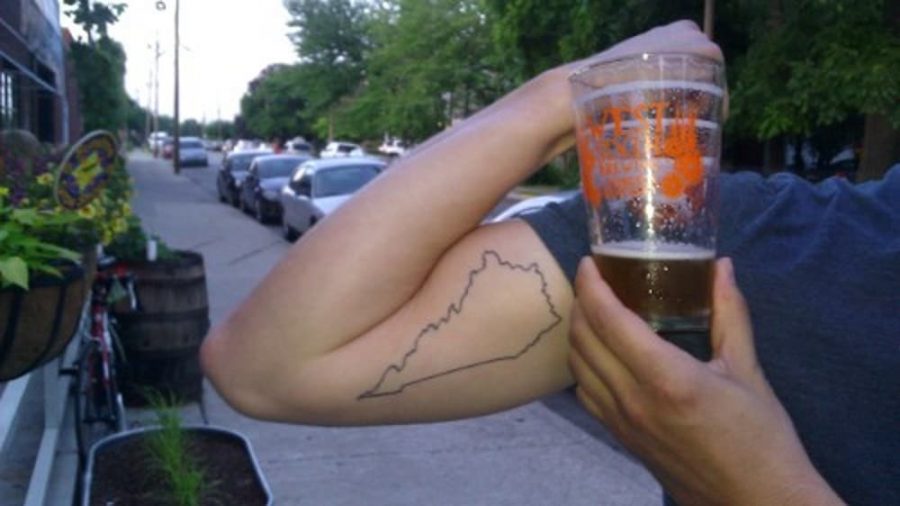 Kentucky in the Civil War

Assume that Kentucky is part of the South? Think again. Come visit between October and April and tell me how “Southern” the weather feels. And you won’t find many barefooted people sat around on porches with lemonade at any time of year.

Contrary to widespread rumor, Kentucky actually sided with the North during the American Civil War. The state began as neutral, then switched allegiance to the North after those pesky Confederates violated neutrality.

President Abraham Lincoln, another Kentucky native, recognized the importance of Kentucky with his famous quote: “I hope to have God on my side, but I must have Kentucky.” Interestingly, his sworn enemy, Confederate President Jefferson Davis, was also from Kentucky.

Two tough Kentuckians fighting for the fate of a nation. No wonder the war dragged on for four years.

On Horse Racing in Kentucky 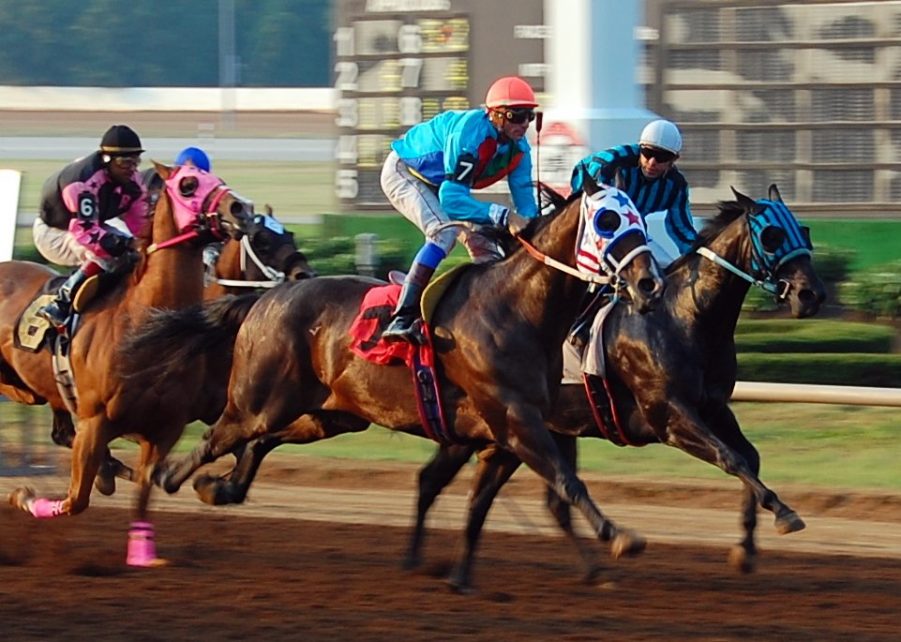 This is the epicenter for all things equine, especially racing. The grandson of William Clark (yes, the explorer) had some big shoes to fill, so rather than hack through the wilds of North America, he started the Kentucky Derby in Louisville. Mission accomplished.

Why are horses in Kentucky so good at what they do? The limestone in the water here makes their bones extra strong. It’s also what makes bourbon, well…bourbon. The tentacles of Mammoth Cave, the longest cave system in the world, spider throughout the state and deliver sweet limestone everywhere.

On Rednecks in Kentucky 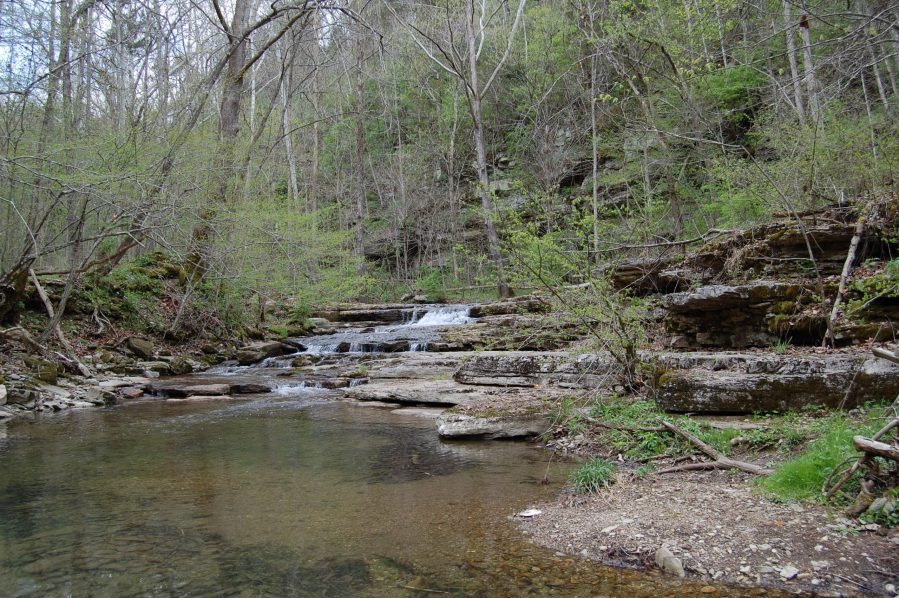 Yep, we’ve got ‘em. And I’m willing to bet that you do, too. Go outside of the metropolitan areas in Kentucky and you’ll not only find gorgeous landscapes, but also a few frightening people who are convinced that the South will rise again.

You’ll find the same density of meth-cookers in the hills of California, Florida, or even New York, for that matter. But that doesn’t stop television shows such as my beloved Family Guy from taking every opportune jab they can at the Bluegrass State.

Here’s a little secret you already know: most of the stuff Hollywood feeds us on television is bullshit.

For the record, I just spent several weeks chasing chickens around an organic farm in rural Kentucky. There weren’t any rednecks, just good people wanting a peaceful, self-sufficient life. And every friend I have is either thinking of hiking in the mountains or heading that direction whenever the sun is shinning.

Not all people who prefer life outside of cities belong to the redneck subculture. 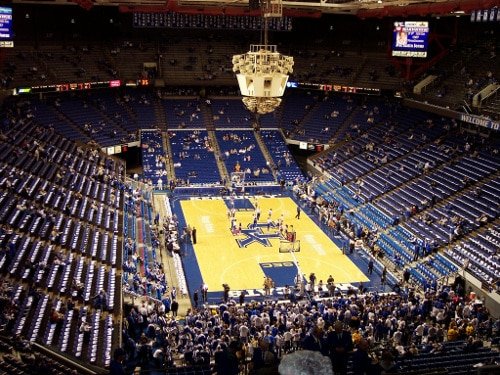 I don’t really care that much about sports that involve balls, but I do enjoy the madness they bring. I was watching NCAA championship wins while in diapers. A nervous energy permeates the city during games, and I’ve had more than my fair share of good times celebrating; it brings the city together.

With the most wins ever, the Kentucky Wildcats (based here in Lexington) are the most decorated NCAA basketball program in history.

I was downtown for the riots after the championship wins in 1996, 1998, and 2012. Chaos still ensued during our runner-up years of 1997 and 2014. The Louisville Cardinals stepped up to win the championship in 2013. That trophy feels very at home in Kentucky. Oh, and our cheerleaders are just as good: they’ve won the national championship 21 times—more than any other school in the U.S. 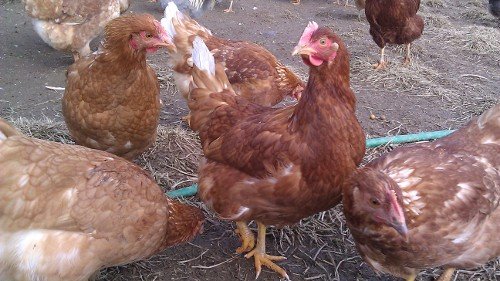 Finally, on to my pet peeve. The legendary old coot, Colonel Sanders, was actually born in Indiana. This guy’s legacy has caused me a lot of trouble over eight years of international travel. His restaurant was the Sanders Court and Cafe, opened in Corbin, Kentucky. OK, I’ll concede that the world’s second largest restaurant chain is headquartered in Louisville. But the first Kentucky Fried Chicken actually opened in Salt Lake City, Utah, in 1952.

Fazolis (Italian) and Long John Silvers (fish and chips), two other fast-food restaurants, also got their starts here in Lexington. But thanks to the Colonel’s marketing efforts, Kentucky is forever associated with chicken.

In 1987, KFC became the first Western restaurant allowed behind China’s iron curtain. And even today, there are still more KFCs in China than in the U.S. I’ve seen more than my fair share of young Asian couples dressed nicely for a date night at KFC. There are a few KFCs around Lexington, but smart people don’t usually eat there. Seriously.

We’ve got too many incredible Kentucky Proud restaurants serving top-notch fried chicken. Even the deli inside Save-a-Lot grocery on Southland Drive (not Critchfield Meats) makes far better fried chicken than KFC. People queue up for it.

We don’t have many sprawling chicken farms in Central Kentucky. Lexington is known as the “Horse Capital of the World” for a reason. You’ll see lots of horses, and a few cows, but you’ll have to go looking for chickens. I accidentally did and found myself on a farm with over a thousand.

But seriously, don’t make yourself sound like a marketing-brainwashed ass by mentioning chicken the next time you speak to someone from Kentucky.

Come See Kentucky Proud for Yourself

Say what you will about this state, but until you’ve smelled the air here, don’t fall for the stereotypes. Happy Chandler was spot on when he said, “I’ve never met a Kentuckian who wasn’t either thinking of going home or actually going home.” After walking in more than 30 countries over the last eight years, I couldn’t agree more.

Buy the ticket, take the ride… 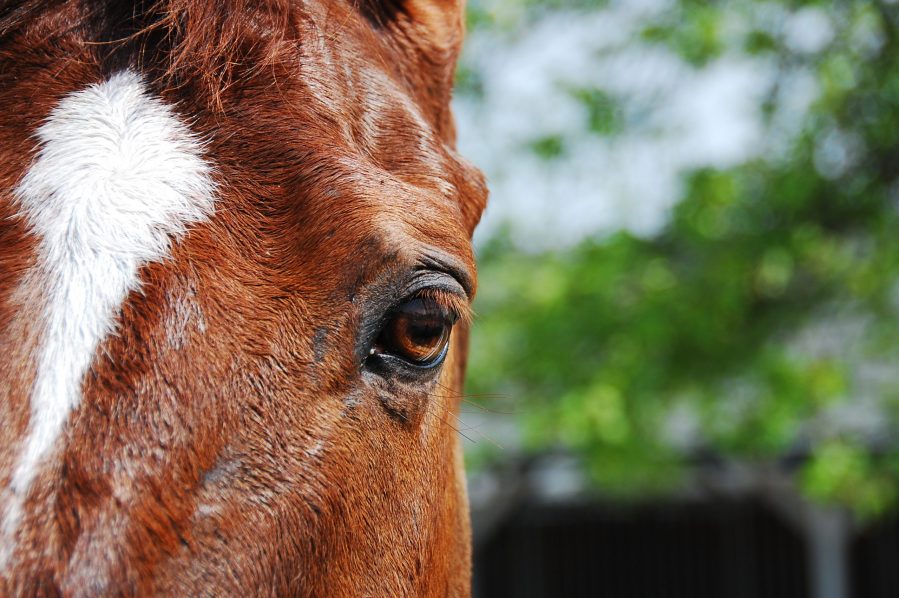