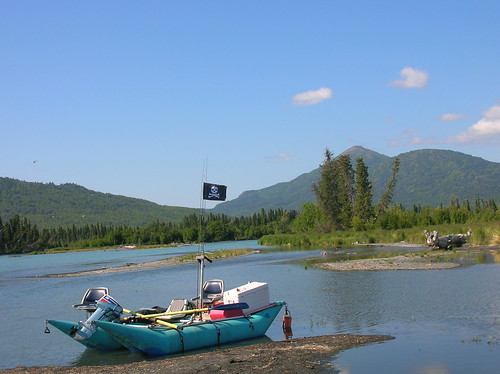 The smell of coffee drifted through the cold Alaskan air to my nostrils and served as my alarm clock. I knew that it was early, and my body protested, but I sat up in my tent and began getting ready because today there was no time to fool around.

I was going fishing.

It was around 9:30 a.m. by the time we had gathered our gear and got our boat in the water. The boat was a light, floating platform with two inflatable pontoons. We could row or use the small 15-horsepower outboard motor. Our boat supported three people and turned out to be very stable in some of the choppy water.

Skip, our local friend and guide — and the most experienced on the river — gave the float trip its official start by planting a skull and crossbones Jolly Roger flag on the highest part of the boat. The flag let the lightweights out there know that we meant business today. We were to be feared on the river. Feared because we were all three prior military veterans. Feared because we were armed to the teeth with gear to make war with fish. Feared because this was my first fly fishing trip with a real fly rod. Nothing like a newbie whipping a hook around madly at the end of 20-foot-long line. That alone should have been enough to clear the river!

The water was ice cold, and the current was strong. Luckily, I was loaned some good waders and rubber boots, otherwise a slip on a slick rock would have put me into the freezing water and may have ended the trip quickly. The sun was bright and the sky crystal blue, but a dousing with the ice water would have still brought on the chills and most likely hypothermia with the wind blowing like it was.

We floated down the river, past all the “combat fishermen” that line up on the banks with no boat, almost arm to arm, and cast into the water competitively. We were in much better shape and zipped past them to gorgeous, untapped fishing spots where sometimes we were the only humans.

We pulled into one deep fishing hole near some rock walls and found a lot of big salmon. They were jumping out of the water almost within arm’s reach of the boat. In the same spot, we watched as a young bald eagle — which are very ugly by the way until they get their plumage — flew right over our heads and tried to catch a fish in the water. His talons splashed in the water and came up empty handed, so he did a circle and landed on a nearby log to watch for more opportunities. He was only 50 meters away or less; that was the closest I have ever been to an eagle in the wild. Many more adult eagles soared over our heads that day; they are the most beautiful and serious birds that I have ever seen.

I lucked out, and with much fanfare, caught the largest fish of the day.

With a lot of help from Skip and David, I landed an incredible 22″ 4.5-pound rainbow trout that gave me one hell of a fight for 15 minutes. It was a gorgeous color and a very strong fish, the toughest I have ever fought. We took pictures, shook hands, gave high fives, and got him back into the icy water quick. He swam off in a hurry to warn his friends, no doubt. That was the largest fish I have caught in a long time, and definitely the largest trout I have ever caught. Gotta love newbie luck! 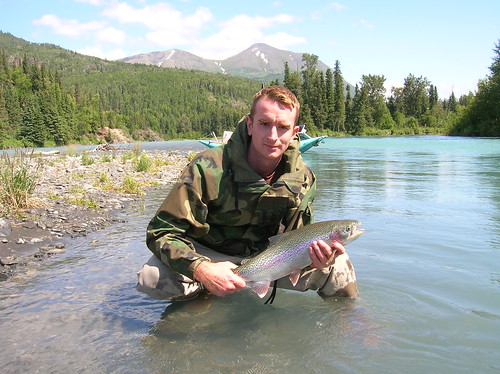 After a quick lunch on the bank of the river, Skip navigated us through some rapids through a canyon. I had the front seat on the boat and cold, white sprays of water in my face reminded me that this was Alaska and not Kentucky.

The river dropped us off into a seemingly unreal, dream-like setting. It looked like the stereotype of Alaska that you would see in a tourist brochure. The mouth of the river ended in a huge, clear lake surrounded by snow-capped mountains. You could even see the perfect reflections of the mountains in the water. There were no other humans around except for two fishermen who had landed on the lake in a small float-plane. I have never been anywhere so natural and secluded in my life. We fired up the 15-horsepower Evinrude motor on the boat and buzzed across the lake for over an hour to our pickup point at a campground on the upper part of the lake.

During the one-hour journey, we never saw another boat, human, or structure on the shore. It was pure, untouched wilderness, and despite being exhausted, I drank in every minute and every mile of it with my eyes. I searched the banks for bear, moose, and other wildlife, but had no luck. No matter how hard I tried, I couldn’t wipe the smile off my face when we landed. 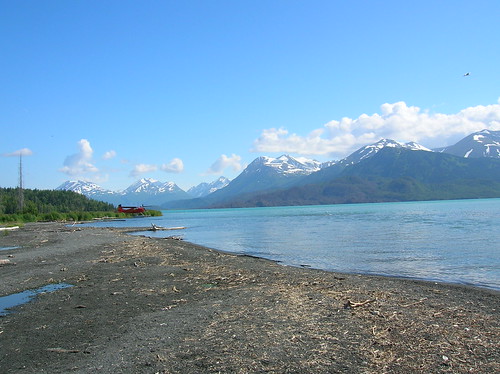 I’ll never forget that trip across the lake. Or the trout. Wow!

Previous Post: Camping in Alaska – Day 1
Next Up: Where Are the Bears?