Scrambling Around the Kelimutu Volcano in Flores, Indonesia 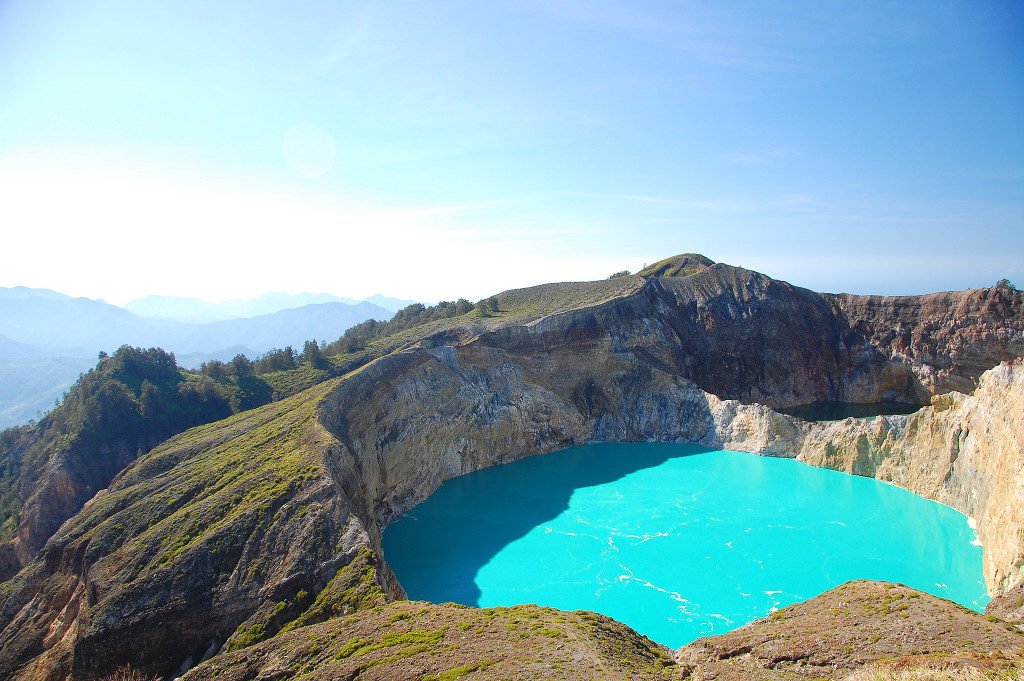 Another wisp of gagging, poisonous sulfuric gas hit me in the face and made me shut my eyes.

Once again, I was slipping and sliding on loose volcanic rocks — yellowish rocks that you can crumble in your hands. The insecure footing makes it tough to stand up, let alone do any climbing.

Several hundred feet below me, Kelimutu volcano in Flores, Indonesia, was an other-worldly color.

At 04:30 this morning I endured an absolutely freezing, no-helmet, 40-minute motorcycle ride from town to the base of Kelimutu. I practically ran up the steps and trail with a torch to the crater, trying to beat the quickly approaching sunrise. The first lights of dawn were just turning the horizon orange while I was still on the trail.

When I got to the top, the chilly wind was biting, but below me was one of the strangest natural sites I have ever seen. The always-changing Kelimutu lakes sat positioned in the vents of a giant caldera. The first lake was the strangest blue color, definitely artificial looking, more like like a spill of turquoise paint than water. The lake in the vent next to it was a darker green. In the lake behind the other two, the water was mostly black. How could all three Kelimutu lakes be different colors despite seemingly coming from the same source?

Even with widespread Christianity here, many of the locals retain the animist belief that when people die, their souls come here to rest. The young people go to the blue lake, the older people to the green lake, and wicked people are relegated to the black lake.

Ghosts or not, this is definitely water you wouldn’t want to take a dip in. It is so full of dissolved minerals, sulfur, and assorted nasties that it has turned acidic. In effect, it would slowly digest you long before you were able to claw your way up the sheer rock cliffs surrounding it.

Although a messy and legendary Star Wars-esque death, I think I’ll pass.

I watched my steps that much closely as I scrambled around the dry and lifeless crater. Earlier, I met a nice French-Canadian couple and Czech couple on the viewing platform. We unanimously agreed that if the Lonely Planet said DO NOT scramble around the crater, that we should scramble around the crater. We ducked under the safety railing and spent the next couple of hours making our way around the Kelimutu lakes on a crumbling path.

When we reached the far side of the crater, the air was barely breathable from the gases coming off the water, but we managed to make it all the way around and back to the safety of the concrete path. Pointless and dangerous mission accomplished, but hey, that’s part of the magic of backpacking travel. The only injury was some sunburn, nothing like freezing and sweating buckets in the same morning. As much as I love rock climbing and scrambling, I’m starting to think that climbing these volcanoes is hot, dangerous work — the low-quality rock makes it nearly impossible to keep your footing.

We hiked two and a half hours back down the steep road to Moni. When we came staggering into the village, I was hungry, exhausted, sunburned to a lobster-red color, but smiling from ear to ear.

Rather than get any proper sleep, there was a party here at the guesthouse last night. As usual, it was myself and about 20 locals. A guitar was passed around, as was some arak (the dangerous local moonshine), and to tell the truth, I had a blast! The guys here in Flores can sing and play as good as any folk singer; it’s almost expected of them, and they are handed a guitar at a young age. They constantly asked me, “What do you play?” All men are expected to play some instrument or know a few songs on guitar. One guy in particular had John Denver down perfectly and we sang Leaving on a Jet Plane and my all-time favorite from him I heard all over China: Country Roads.

I met three young doctors from Java who spoke good English, and we had some great laughs, singing and dancing. Doctor Rachel was the only woman present with 20+ local men, but unlike a party in the West, no one here cared or paid any attention. The gathering was simple, good, honest fun, and despite being the constant center of attention because I was a foreigner, the party is one of my best memories from here in Flores.

Even though this is the smallest village I’ve spent a night in so far, Moni has earned another night on my itinerary and a place in my heart. It feels good to be accepted, and if I keep this up, I’ll be speaking decent Bahasa Indonesia in another few months!

I highly recommend diverting to the lakes and scrambling around the Kelimutu volcano in Flores, Indonesia.

.
Previous Post: Ende, Guns, and the Future
Next Up: Goodbye Moni, Hello Maumere