Kadidiri in the Togean Islands, Sulawesi 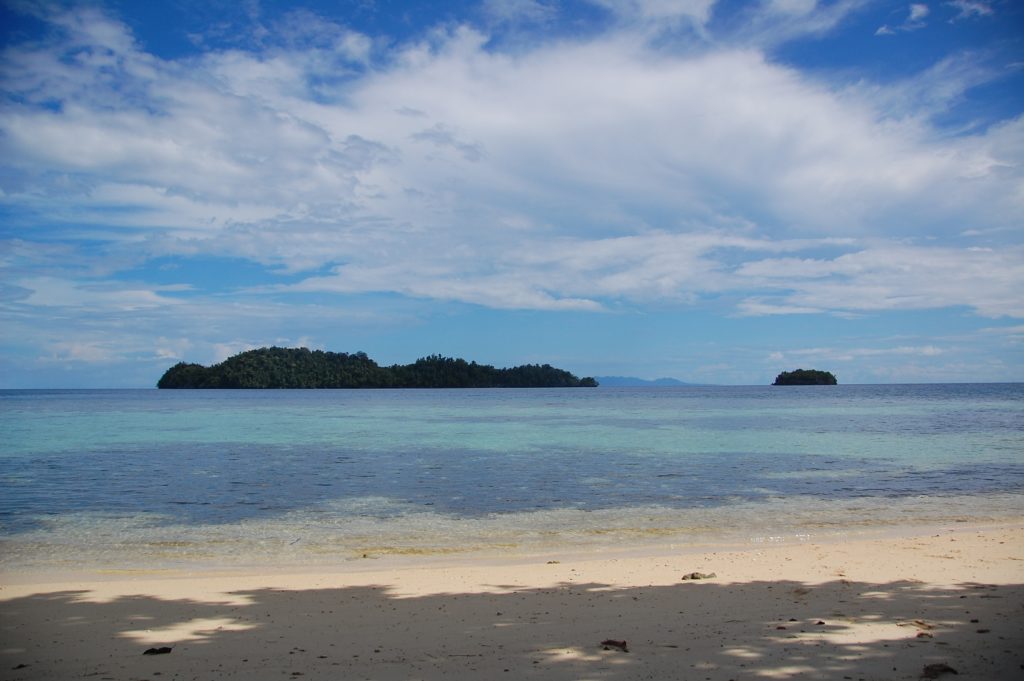 After my usual lunch of rice and fish, and telling the lucky divers an envious goodbye as they left on the boat (I can’t wear fins with my feet still bad), I put a shirt on, grabbed my knife and camera, and headed for my favorite place in the world other than the beach — the jungle.

The jungle on Kadidiri in the Togean Islands of Sulawesi is impressive and a matrix of narrow trails criss-crosses it giving people access to the multitude of coconut trees here. I went alone, but with the island being so small there is very little opportunity to get lost. Walking west toward the sun will always get you back to the beach.

If you’ve never been in an equatorial jungle before, it can be difficult to describe. The blaring sounds of life, the smells, the steam rising up into the thick canopy — it’s enough to make anyone’s heart beat faster, especially when you are alone. Towering coconut trees and the huge leaves of banana trees block out most of the sun and do their part to trap in the heat and humidity. I think I sweated off a pound or two just walking for a couple of hours.

Only 20 minutes into my walk, a medium sized brown snake heard me coming and slid off the trail in front of me. I never saw its head so cannot identify it, but my gut tells me that it was harmless. Besides, like most animals it just wanted to be left alone, and did it’s best to get out of my way. Unfortunately, seeing it right off the bat also meant that I would be watching my feet most of the time rather than looking up for photos!

The jungle here is inhabited by huge coconut crabs which I was hoping to spot.  A local told me that they were nocturnal and there were so few left (they are being eaten to endangerment) that you have to bait them and wait. Sitting in the dark in a jungle for hours waiting on a giant thing with claws to come collect my coconut offerings just didn’t sound like much fun, so I never did see one.

I found my way out onto a tiny private beach surrounded by rock walls on each side. There was an abandoned bungalow operation there which was grown up with weeds and falling down. There were two very dodgey fishermen on the beach armed with spears which approached me cautiously when I emerged from the jungle. I did my best to talk to them but got no responses other than stares at my camera, so I decided it was time to walk out. Besides, I stupidly had told no one where I was going, so I said goodbye and quick stepped it down the trail. I looked behind and they were still watching me, but did not follow.

The secret to walking in the jungle is to just keep walking. If you stop, it gives time for every insect in proximity to home in on you and come in for the attack. I sat for around 15 minutes to have a Ranger pause just listening to the sounds and spotted a wasp on the ground dragging a giant tarantula sized spider down into its hole. I would have bet on the spider, but apparently the wasp won an earlier battle.

Seeing how thick, snake and ant infested, and uninviting the undergrowth was off of the trails made me have a very dear respect for any soldier that has ever had to fight in the jungle. It’s hard enough to keep yourself in one piece in a place like this, even when there aren’t people with guns looking for you. I guess ants aren’t really much of a concern when you have to dive for cover to avoid a machine gun.

I came out of the jungle around 2 p.m. and proceeded straight to the sea. With so many cutting and stinging plants brushing arms and legs, it’s always best to get the juice and bugs off before they have time to cause skin problems later. I caught the dive boat across to a small island with a group of people and we snorkeled the entire circle around the island. I’ve never seen such impressive coral and marine life on a snorkeling trip — who needs diving?!

I had gone with a boatload of couples, so everyone else was paired up doing the cutesy holding hands underwater as you swim side-by-side thing. I went off on my own and am glad that I did, within 30 minutes of swimming I spotted a small black tip reef shark hunting the reef. He was small (about one meter long), but it’s still the first proper shark I’ve seen in Indonesia and my heart was beating madly. Soon, I saw two very large barracuda, a crocodile fish which scared me more than the shark because there are highly aggressive saltwater crocodiles here, and every other type of reef fish that you can imagine.

Along the way home we stopped off at a small fishing village built on stilts on the water to buy supplies and oddly gather one kitten to take across to Kadidiri. A  few people took advantage and jumped over the sides to snorkel. They spotted some sea horses and just as I was reaching for my mask to join them, I heard a plop, plop, then a trickling sound. It didn’t take long to realize that the toilets in the village were just holes in the houses a few meters away and it was all going into the water around our boat.

I kept my seat.

This place was exactly what the doctor ordered for road weariness and offers some much needed decompression before I leave Indonesia. Travelers on big trips that are always on the move tend to not absorb half of what they’ve seen and experienced until they get home, then it hits them like a brick. Kadidiri Island was perfect – adventure is easily within reach or if you just feel like being lazy, as they say in the islands “Maybe tomorrow…”.

Previous Post: A Journey Well Worth It
Next Up: Goodbye Indonesia