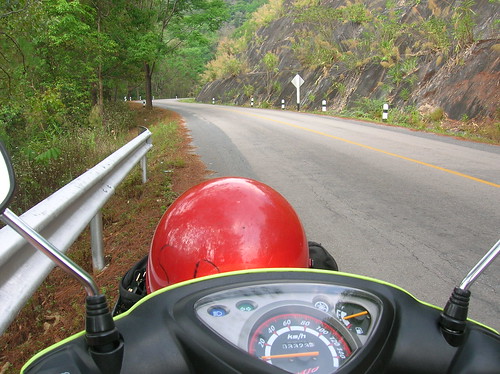 I decided that I would leave Chiang Mai early and come back in a week for the big water festival — a Mardiz-Gras-style event with three days of street parties and people hosing each other with giant super soaker waterguns. I’m excited, I get to be a kid with a watergun for three days again!

I have heard from many, many travelers that I have to go see Pai. It’s a tiny town about 3.5 hours northwest of Chiang Mai, up in the mountains. Lots of hippies settled here so there is good music, art, and a peace/love feeling about. I did not want to take the crappy local bus up the steep, winding mountain roads so after talking to my French friends, I knew what I had to do: I got up early in the morning and went straight to the motorcycle shop.

After arguing with the guy for 20 minutes because I did not want a pink bike, I left with a shiny new green 110cc Yamaha. It wasnt exactly a “chopper” and I would be tossed out of any biker bar I tried to get into, but I knew it would get me to Pai. I chose an automatic, hoping that my backpack could sit on the floor between my legs for the ride.

I met up with Vincent and Vanessa for some breakfast, consulted my maps, then off I went. My bag was too big so I actually had to wear it, I loosened the straps so that the weight would sit on the seat behind me, but it was still pulling me dangerously off balance when I leaned into turns. Mind you, this was only the 2nd time I have ever driven a motorcycle. I found myself with a 35 pound pack on, dodging and weaving around noon traffic in Chiang Mai, Thailand’s 2nd largest city.

I made my way through town dodging cars, a multitude of motorbikes, vendor carts, and doors opening randomly on cars that were doubleparked on the left, all while searching street signs for the tiny English written underneath the Thai as they passed by at 80 km per hour. One such door opened right in front of me, I overcorrected to the right and literally bounced my right shoulder off a local bus that was driving beside me! It worked out – the bus kept me upright and didnt hurt a bit. Oh — and you have to remember to drive on the left side of the road here. 🙂

I made my way north and out of the suburbs of Chiang Mai and then the ride became one of the best experiences of my trip. I was pushing the bike to around 100 km per hour on Chiang Mai’s superhighway and loving every second of it. I forgot all about the backpack and the ride became natural and enoyable (with the exception of a large bug that ended his life across my forehead. The bastard actually left a red whelp. I’d like to think he died slowly and painfully, but the explosion of guts and legs into my hair tells me otherwise.)

I wound up into the mountains, stopping once to check my map and make sure I was where I thought I was. This was my first trip from point A to point B on a motorcycle, and starting into the mountains in Thailand seemed to be pushing my luck I felt at the time. The road turned out to be paved nicely pretty much the whole way, it was just extremely windy and hilly. It was a beautiful ride. A little chilly, but very memorable. I was just starting to get into the groove when I noticed my fuel guage was at 1/4 tank.

Hmmm…my brain began to calculate…run out of gas = bad. Nearest town behind me = 80 kilometers. I knew that I had to go forward. I passed a couple Thai guys on the side of the road so I stopped and in my best Thai I asked them how far to Pai. The man confidently pointed and said “Hok Kilometers.” Six kilometers, I’m good! I thanked him and took off towards my waiting petrol. I rounded a sharp turn and my jaw dropped at the sign I saw. It read:

I actually stopped the bike in shock and horror. My rusty gears started grinding again…my new battle plan was that I would make it as close to Pai as possible and then hitchhike the rest of the way until I could return with fuel.

I started driving VERY conservatively, not using the throttle downhill at all, cutting turns, and keeping my speed around 30 km per hour. My needle was in the red now, and some of the major hills would make my engine cough and miss as it gasped for petrol. I was still at least 20 kilometers from Pai when I saw a tiny shack with a fuel can and hand pump! I approached the family and the old Thai man pumped my gas. I dont want to even think about how old and watered down it was, but these scooters can run on whiskey Ive been told. I paid him generously, but didnt care — I was going to make it to Pai!

Here is a pic of my salvation: 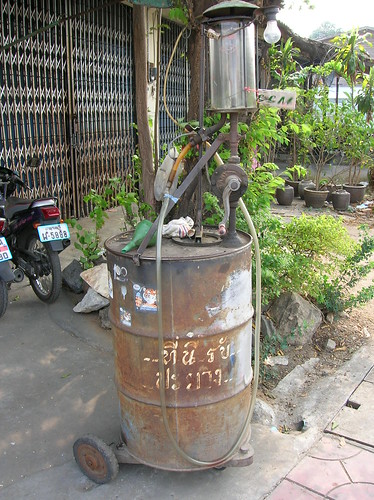 I sped off, enjoying every single bit of G force I produced on the turns and hills, big smile on my face, and rolled into Pai about 16:00 with plenty of daylight to spare. It took me about 4.5 hours of riding to reach here from Chiang Mai. I am already looking forward to the drive back!