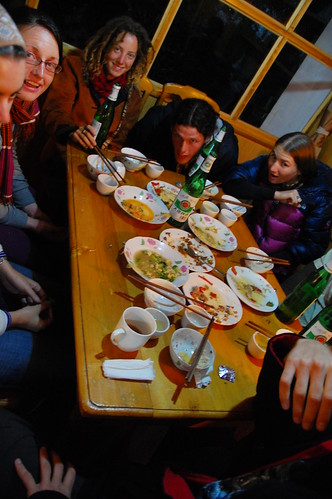 I arrived in Lijiang last night, the next stop as I make my way deeper into the mountains and closer to Tibet. It was only a four-hour minibus ride from Dali, but most of the journey was made uphill and in the pouring rain. Twice I thought the bus ride was the end of my vagabonding (and life) as our crazy driver passed cargo trucks that were moving too slow for his taste. We were passing around blind corners in the rain, and had such a close call with an oncoming bus that the driver had to smoke a cigarette afterward!

I just put my iPod on and slid deeper into my seat so that I could not see what was coming. Sometimes it’s better that way!

Despite the dangerous driving, I almost got back on the bus as soon as I got off — Lijiang was so cool that I could see my breath! It was obvious that all the uphill driving had taken us high enough to where the mountains influenced the weather.

Just like Dali, I arrived in the “new” part of Lijiang, which looks like everywhere else. The next step was to find a way to get to the Old Town, about seven kilometers away. Normally, I would have walked, but it was raining too hard to even see where I was going. I met up with a French couple heading that way and we shared a ride to Mama’s Naxi Guesthouse.

The 15-yuan dorms are small but new and wooden, however, the entire common area of the house is open-air, which means you can see your breath inside and out! It’s cold. Damn cold. A walk from the dorm to the toilet on the other side means being wet and cold. I am traveling with only one pair of long pants and one sweater, so wet equals not good in this case.

The best thing about Mama’s are the numerous cats that she takes in off the streets, and also the hospitality. I have never seen anything like it in China. All the free tea and free fruits and nuts. Dinner time is an eight-course feast, family-style with everyone reaching and grabbing food with their chopsticks — all for only 10 yuan! (about the same cost as a milkshake at a tourist place). There was more food than anyone could eat, including veggies, three meats, tofu, mushrooms, and delicious Tibetan-style dishes. 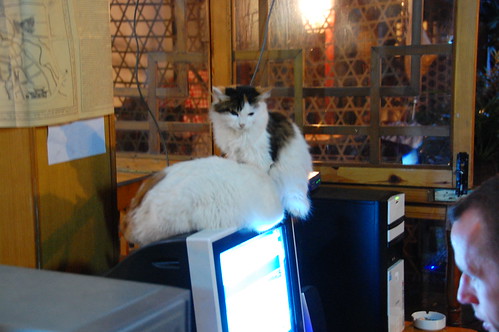 About eight of us at the table kept telling her: chi bao le (I am full), but the food just kept coming! Mama Naxi is my new grandmother in China! There is a sign in the guesthouse that reads: “curfew is midnight — don’t make mama mad!”

I won’t. Especially if she keeps feeding me like this.

.
Previous Post: A Cycling Adventure in Yunnan
Next Up: A Wander Around Lijiang, China